The saga could open the cash-strapped and almost bankrupt public broadcaster up to damages claims in the millions.

First published by Scrolla.Africa (available only on cellphones)

The SABC faked judgements by external experts in more than 120 labour disputes to fire staff. This happened without the knowledge of labour law advisers who recommended lesser sanctions. The faked documents were signed off by the public broadcaster’s top executives, including former chief operating officer Hlaudi Motsoeneng.

These revelations have only just come to light, as some of the axed staff have taken the SABC to the CCMA – and the documentation is coming into the open.

In the end, Tokiso found 123 employees guilty of misconduct, and the presiding officers recommended a range of sanctions, none of which was dismissal.

But on 5 April 2016 the SABC dismissed the 123 employees, without informing Tokiso of its reasons.

The SABC, like any employer, is free to ignore the recommendations of independent presiding officers. However, what is less common is what it went on to do – draw up new recommendations, under the banner of Tokiso – with Tokiso case numbers.

In doing this, the top executives took the extraordinary decision of signing the new recommendations themselves. Employers never do this. Instead the documents should be signed by the presiding officers, who are akin to judges.

Tokiso declined to comment on individual cases other than confirming the documents for the rulings are completely different to Tokiso’s documents.

The scandal was uncovered by Scrolla.Africa, a news start-up focusing on providing news for South Africans on their smartphones. A copy of the original document is here: 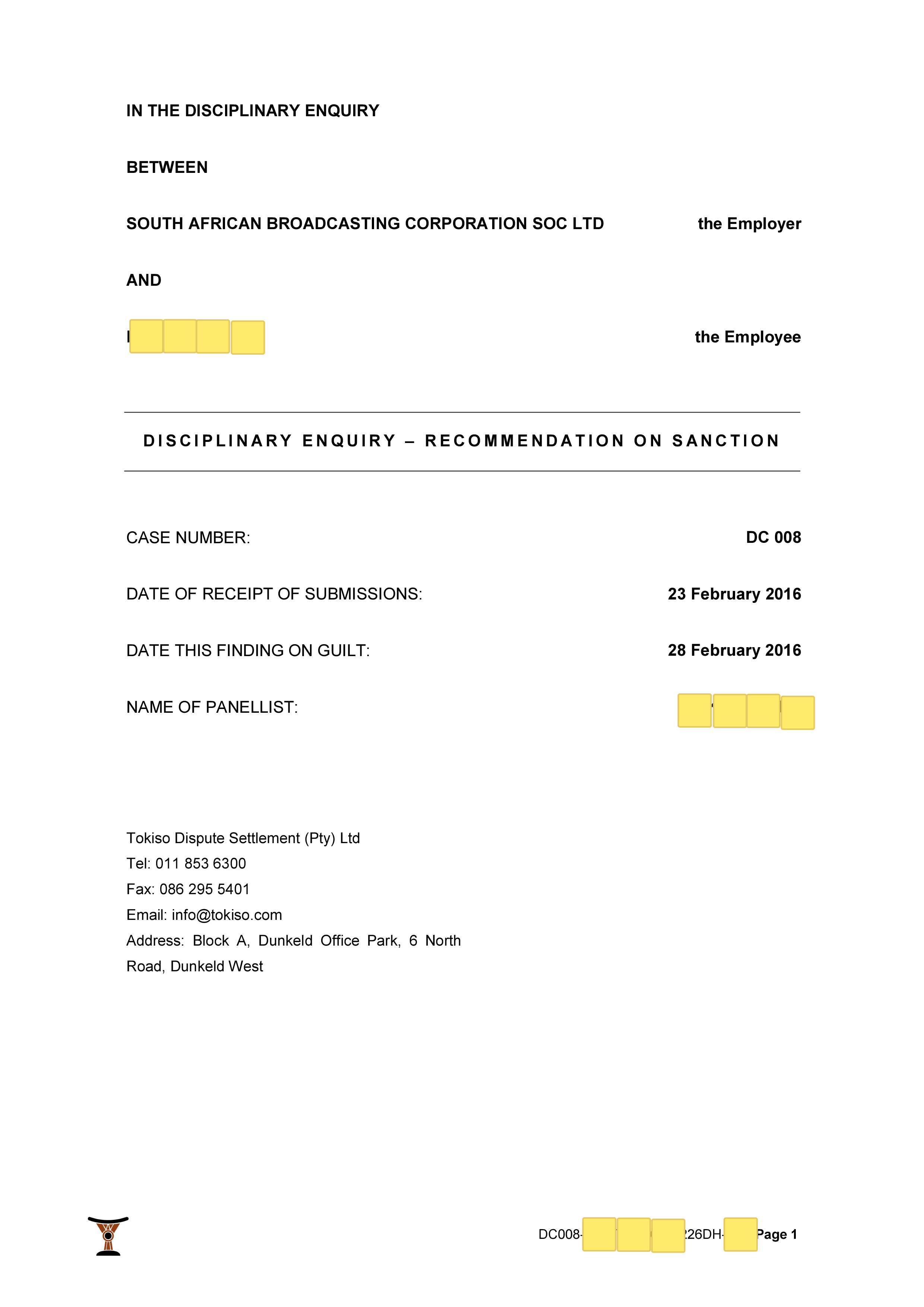 and the SABC’s version is here. 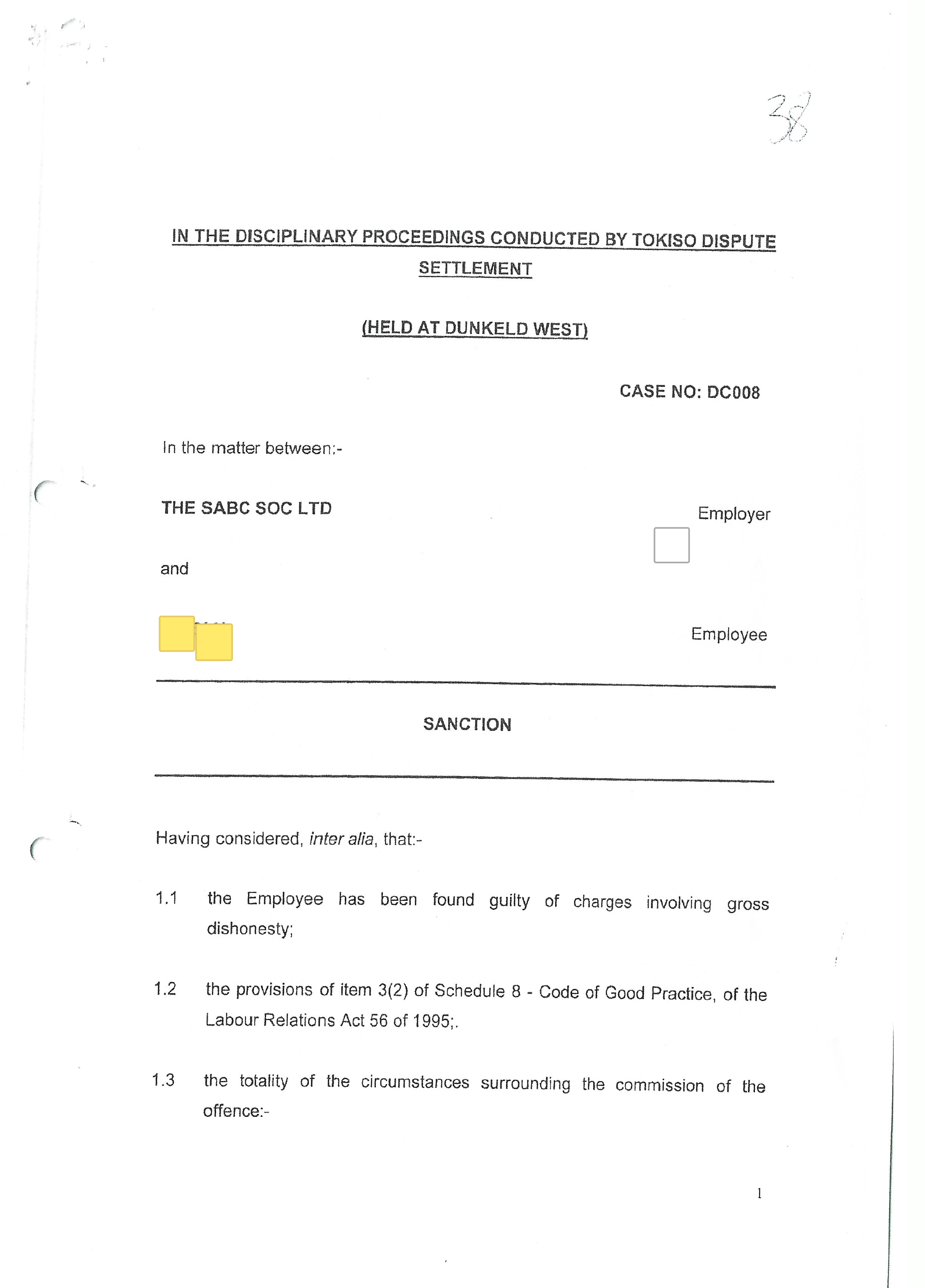 The saga could open the cash-strapped and almost bankrupt SABC up to damages claims in the millions.

Motsoeneng, the controversial former chief operating officer, has admitted to signing the SABC home-grown documents purporting to be from the independent adjudicators. But, he said, “A group of individuals… persuaded me to overrule the law firm decision just to have the employees’ disciplinary action taken.”

Known for his outlandish comments, Motsoeneng told Scrolla.Africa that before the “group of individuals” persuaded him to overrule Tokiso, “I was siding [with] the workers and unions.”

“The documents which I signed came to my table after recommendations from the HR department and the law firm that was dealing with the case. They had double-checked on the legalities of the documents and they were satisfied. That is why they brought them to me to sign,” he added.

Matthews, who left the SABC in 2016, said he could not recall signing the documents or the events surrounding them.

SABC’s acting spokesperson Mmoni Seapolelo said: “This matter is at the CCMA and before the Labour Court… the SABC will therefore not comment any further.” However, in a letter to the CCMA, the SABC confirmed that it had drafted the rulings: “The SABC decided not to accept Tokiso’s recommended sanctions”.

The SABC’s bosses also stood by silently when the unions publicly alleged that the presiding officers organised by Tokiso had been offered bonuses to fire the staff members. The unions and staff appear not to know they were dealing with fake judgments.

Press reports of a leaked memo suggested that Tokiso had been paid extra to find people guilty or fire them. Tokiso said this was untrue. DM