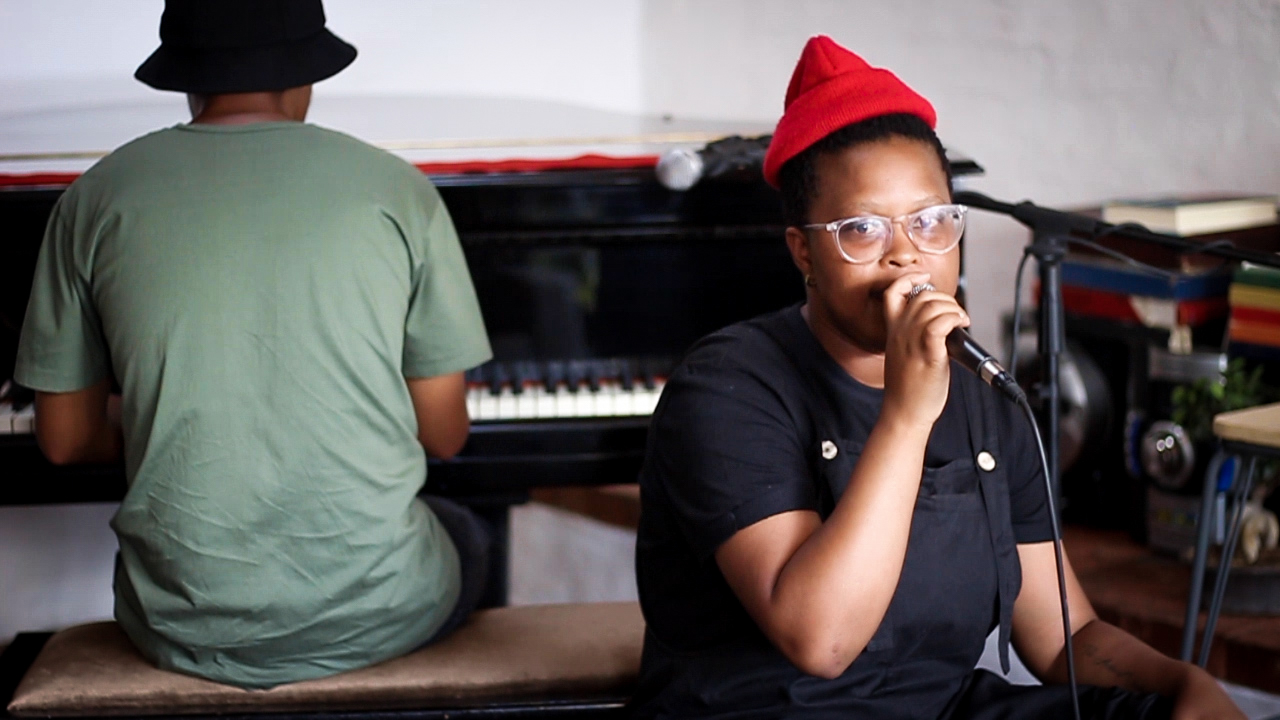 Andy Mkosi performs her music at an intimate event in Norwood, Johannesburg, 24 November 2019.

As the world observes 16 Days of Activism Against Gender-Based Violence, SA activists and civil organisations have ramped up their calls for government to act against violence against women and children. For multimedia artist and musician, Andy Mkosi, her latest musical offering was triggered by the rape and murder of Uyinene Mrwetyana.

The Western Cape High Court heard how Botha planned his attack on Mrwetyana after she asked about a parcel at the Clareinch Post Office in Cape Town. Botha, a repeat offender, told the court through his legal representative how he executed his plan to rape and kill Mrwetyana by bludgeoning his fighting victim to death using a 2kg weight.

The details of the crime had previously been made public, shocking the nation. It was then that Mkosi penned her heart-wrenching tribute to Mrwetyana and the women of South Africa.

Mkosi has for years used music as one of her many modes of expression. However, for the 29-year-old multimedia artist, the relationship between audio and visual art is inseparable. When she took a long hiatus from producing music in 2017, she redirected her energy to explore her thematic preoccupations through photography and, eventually, videography. It was almost two years before she picked up her pen again and wrote lyrics to the backdrop of a beat that referenced a soundbite of Uyinene Mrwetyana.

“Prior to making that song, I wasn’t inspired to make any music. In fact, I thought I was done with music because I hadn’t released any music since 2017. So, I remember the week of the announcement of the death of Uyinene. I remember sitting down, watching TV and everyone and every channel was talking about this,” she says.

“A few nights later, I came across a video of the late Uyinene just goofing around with friends and that sort of sparked the song. So, I asked a friend of mine, Xola Msingaphantsi, if he could create something around that video clip using Uyinene’s voice to create the soundscape for me to write to.”

The video which provided the soundbite to the song Untitled was one of many that were circulating on social media platforms after the announcement of Mrwetyana’s death. In the clip, Mrwetyana is heard saying, “Hi guys, so, basically, you can wear these pants however you want.”

Mkosi says she interpreted the video as Mrwetyana mimicking the style of YouTube presenters and a further testament to the youthful spirit of the film student.

In Untitled, Mkosi makes repeated reference to the soundbite, offering commentary on the ways in which women express themselves through their bodies and how their physical expression is policed through violence.

“I guess for me, also it’s an empowering clip because when you listen to what she is saying in the video clip, it [communicates] that power of being able to wear whatever you want, however you want to wear it,” says Mkosi.

“But then it’s also disheartening because within that same breath, you can’t. You don’t have the freedom to be all of that and wear whatever you want under the current state of gender-based violence in our country.”

Mkosi is sitting with the mastered and completed version of the rap song Untitled about the scourge of gender-based violence in South Africa, while contemplating whether she should release it. She had previously titled it Am I Next?

The Cape Town-born rapper says that, while she has been making music since 2008, she doesn’t want it to seem to those who aren’t familiar with her work that she is launching her career off the back of a tragedy.

“I found myself gravitating towards writing music in order to express all of this emotion that I was feeling at the time. It’s genuinely something I felt at the time and I really want to share that with people and I don’t want to make money out of it,” says Mkosi.

She contacted Mrwetyana’s family after recording the song to share it with them.

“I don’t know if it’s possible, but it would be great if [the song] would be able to spark conversation amongst men in particular.”

Mkosi wants to release the song with accompanying visuals to amplify its impact.

“I think it would be more impactful if we had a video where we have different women from all walks of life maybe reciting some of the lyrics — just like people looking into camera [while] reciting it,” she says.

“I think people consume content differently — some visually. Some consume and understand better when they listen to stuff. So, I’m working towards that.” ML