EFF deputy president Floyd Shivambu’s rental leasing contract and deposit for an upmarket home in Bryanston, Johannesburg, was signed and paid for by a Limpopo businessman whose business has been hamstrung by alleged political interference, papers filed in the magistrate’s court in Randburg show. Yet Shivambu officially told Parliament he had nothing — no gifts, benefits, shares or businesses — to declare. It is a misrepresentation of the truth — an act of fraud that may land him some jail-time.

This, the third story in the Chronicles of Grand Azania series, highlights another notable example of how Shivambu solicits cash and favours from businessmen in order to support his lifestyle and ambitions. It further shows how more than half a million rand in rent and taxes for this home was paid for by poor peoples’ money stolen from VBS Mutual Bank which flowed through Grand Azania, the slush fund Floyd Shivambu tried his best to disown.

However, Shivambu did not solely rely on a bank robbery and poor people’s life savings to support his lifestyle and political aspirations. A court battle between two businessmen details how Shivambu used a service provider to the Limpopo government to sign the leasing contract and pay the initial activation fees for an upmarket Bryanston home him and his family occupied for about 16 months.

Legal precedent suggests Shivambu may have committed an act of fraud when he declared to Parliament that he received no gifts or benefits since he had been sworn in as a Member of Parliament. In the well-reported Tony Yengeni case, the court described misrepresentations to Parliament as an act “with the intent to defraud Parliament”, punishable by jail-time. (More about this later.)

(His legal argument is based on the premises that Mphaphuli signed surety for Shivambu and must, therefore, pay up because Shivambu refused to. Mphaphuli is denying this claim and initiated a counter-claim against Janse van Rensburg.)

Mphaphuli remembers well the day in 2016 when Shivambu asked him for “help”. Shivambu visited him at his Johannesburg house to discuss a potential business opportunity.

“He’d come past my house then and again to visit me,” Mphaphuli said in a telephonic conversation this week.

“It was during this visit we discussed a potential investment opportunity, where Floyd requested my assistance. I spoke to him about my company and the trouble I have, and he asked me for help.”

Mphaphuli is the owner of Mphaphuli Consulting which is in a spot of bother with the Special Investigation Unit (SIU), which he claims is meddling in his Limpopo contract for untoward political reasons.

Mphaphuli was vague around the type of “opportunity” he discussed with Shivambu. He did remember, however, that he “had no good reason not to help the guy”, that they “speak the same language and come from the same district” and that as a matter of goodwill, he agreed to help Shivambu.

Mphaphuli made it clear that there was no “quid pro quo” and that Shivambu didn’t ask for an “intervention”.

Mphaphuli ended the conversation with: “If you look at all the facts, you will see you are talking to an innocent man.”

There is no evidence showing that Mphaphuli benefited from helping Shivambu.

When Scorpio requested comment from Shivambu, he shied away from dealing with the merits of the revelations and evidence against him, but again accused this journalist of unbecoming conduct.

Another ‘fraudulent’ misrepresentation to Parliament

Shivambu’s habit of soliciting funds and favours from businessmen in order to support his lifestyle also saw him asking for “interventions” relating to his wedding to Siphesihle Pezi in April 2017. It is another “gift” Parliament knows nothing about.

“Heita… Please don’t forget to activate that intervention. Am in great need,” Shivambu pleaded in a WhatsApp message on 27 March 2017 to Mulaudzi.

The message is one of a series of cellphone discussions between Shivambu and Mulaudzi which was leaked to the Mpati Commission probing wrongdoing at the PIC.

Along with the message, Shivambu sent the FNB account details of his slush fund Grand Azania. On 29 March 2017, R200,000 from Mulaudzi was paid into Grand Azania.

Mulaudzi and Shivambu, too, had some business deals in common. In the same set of leaked cellphone messages, Shivambu seems to have been using his influence as a politician to solicit deals and connect Mulaudzi with other influential businessmen.

The “intervention” Shivambu derived from Mulaudzi is the second benefit he possibly fraudulently misled Parliament about, when he claimed to have nothing to declare.

VBS money paid for Shivambu’s rent at the upmarket Bryanston property, situated in Grosvenor Road. The money was funnelled out of VBS Mutual Bank and moved towards Sgameka Projects, ostensibly managed by his brother Brian Shivambu. There was no legal reason for the bank or its related companies to pay Sgameka Projects, advocate Terry Motau and law firm Werksmans said in their investigative report titled The Great Bank Heist which was published in October 2018.

Therefore all money flowing into Sgameka Projects is the proceeds of crime.

Between 2017 and 2018 Sgameka moved millions of VBS rand to Grand Azania, another slush fund managed by Brian Shivambu.

Grand Azania then used some of the VBS money to pay the sum of R583,000 to TP Janse van Rensburg, the owner of the Bryanston home in Grosvenor Road. It included payments for rates and taxes and Shivambu’s rent – first R40,000 a month, and with the renewal of the contract R45,360 a month. 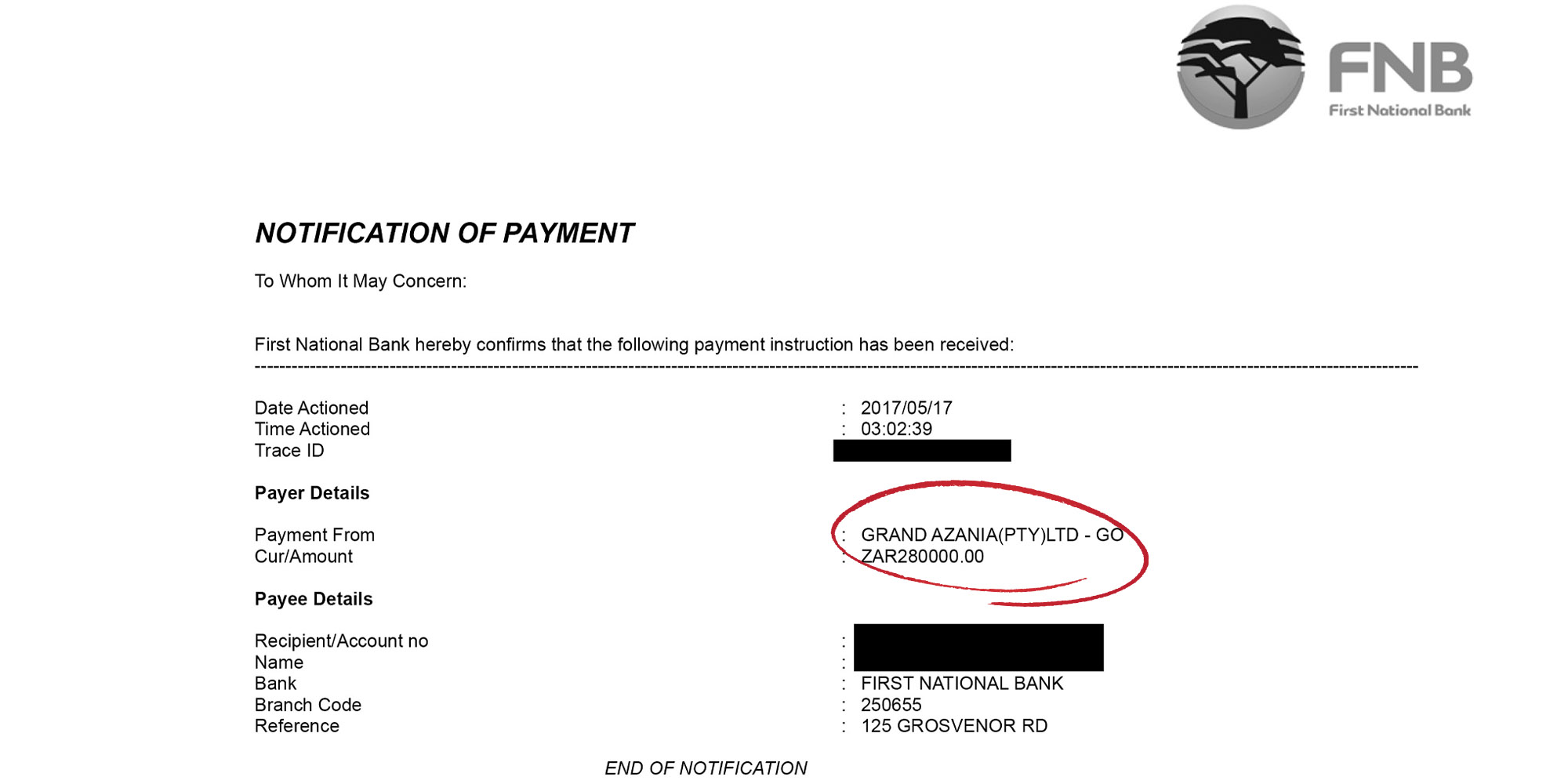 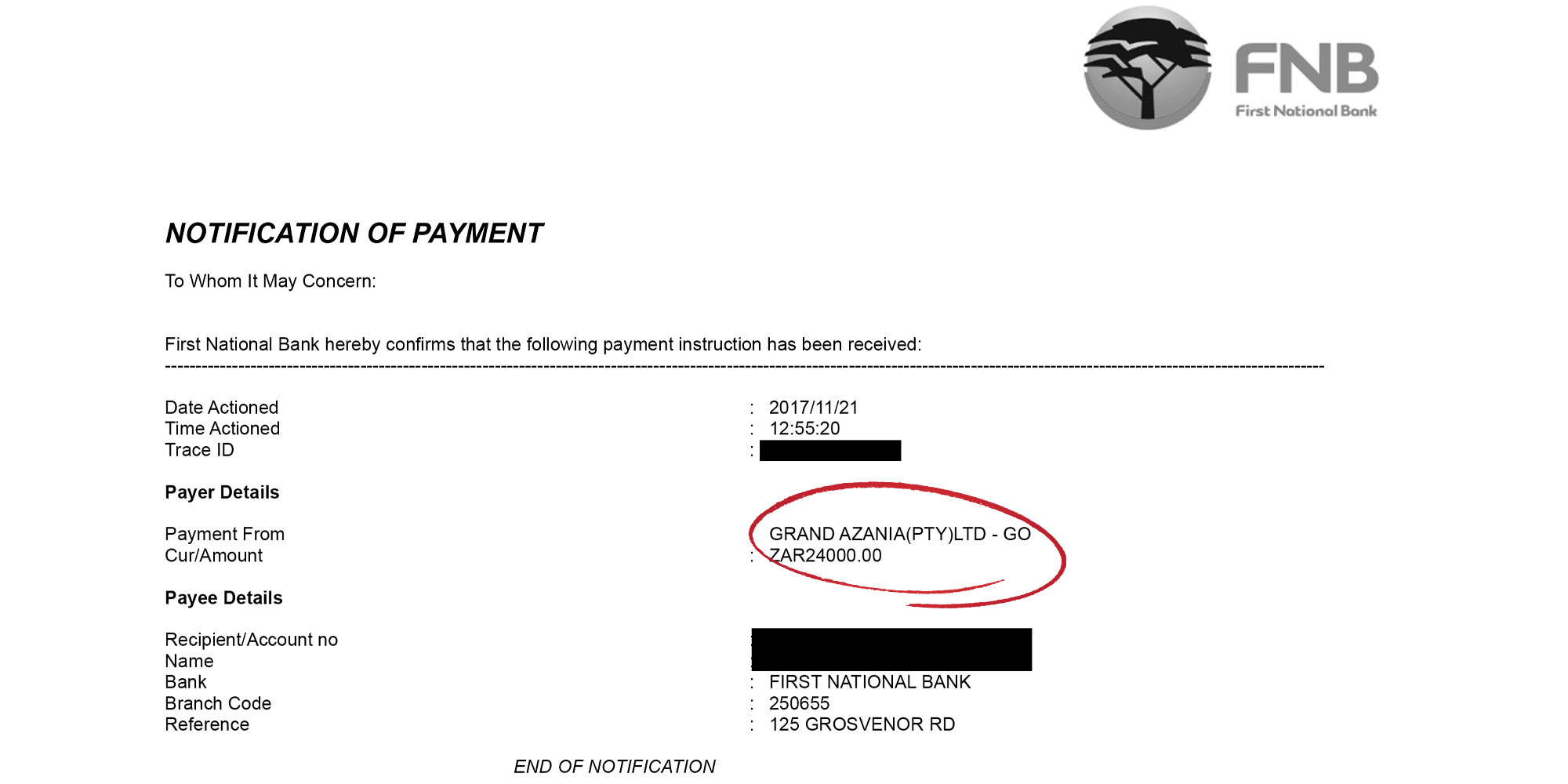 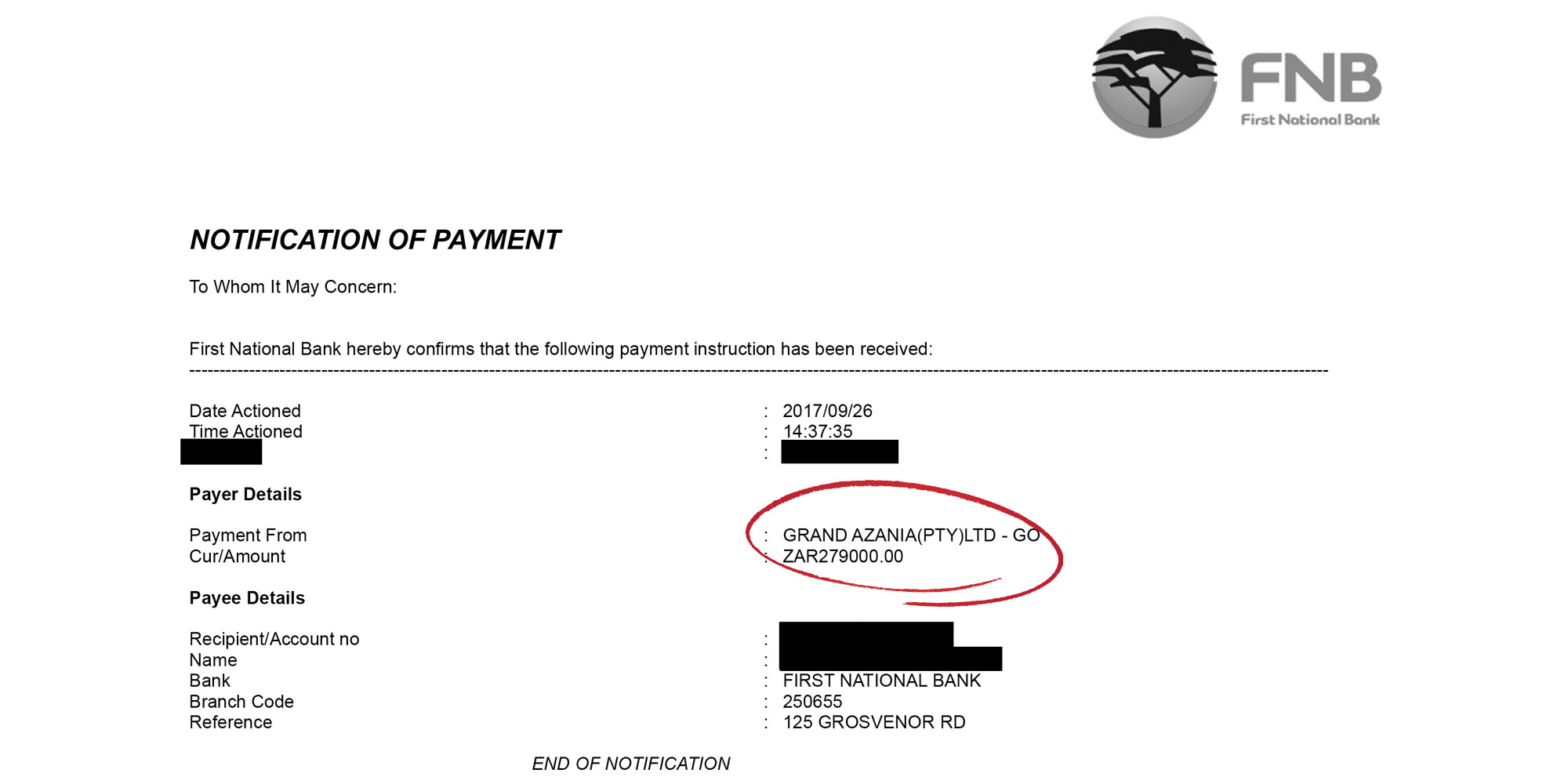 Grand Azania’s payments towards Shivambu’s living quarters are the third benefit he misled Parliament about when he denied that he had any benefit to declare.

The fact that Shivambu was the ultimate beneficiary of millions in stolen VBS money funnelled through to Grand Azania, may fill yet another broken rulebook.

When the fraud was committed, Tony Yengeni was an ANC MP and chairman of the Parliamentary Joint Standing Committee on Defence. Yengeni acquired a Mercedes Benz 4×4 at a discount of 47% in a way which conflicted with his responsibilities as a Member of Parliament. He first denied any wrongdoing, but when word of the transaction leaked into the public sphere, he resigned from Parliament and was charged with fraud and corruption in the regional court in Pretoria.

After some legal to and fro, Yengeni pleaded guilty to the charge of fraud.

Yengeni added this to his guilty plea:

“My relationship with Parliament, representing the people of South Africa was one of trust and I therefore had a duty to maintain the highest standards of propriety to ensure that my integrity… are beyond question, (a duty to not) take any improper benefit or advantage given by virtue of the office I held and to act in good faith and to make full disclosure to Parliament of any personal interests which could place me in a position where such interests conflict with my duties…”

Yengeni then confirmed that “the above misrepresentations were made with the intent to defraud Parliament”.

He was sentenced to four years in jail.

Yengeni launched an appeal against the sentence in the High Court in Gauteng.

The High Court said the following: “…(Yengeni) knowingly and consciously transgressed the Parliamentary code of conduct which expressly required the disclosure of benefits of this nature. At all relevant times the appellant could not but have appreciated that the acquisition of the vehicle in the aforesaid manner constituted a conflict of interests that should have been disclosed to Parliament and the (Joint Standing Committee on Defence).”

The High Court then summarised the extraordinary lengths to which Yengeni and his accomplice had gone to “cover their tracks”, including the crafting of false paperwork.

In the end, the court upheld the four-year jail sentence, saying:

“The fact that the appellant intended to deceive the members of Parliament and the public at large is established beyond doubt by the stubborn denials of the truth reiterated by him for almost two years after the first suggestions were made of the appellant being involved in an improper transaction and by the deliberately deceitful advertisements published by himself in order to cover his tracks and to launch an unbridled and dishonest attack upon his critics.

“There is therefore no basis upon which it could be argued that Parliament or its individual members could not be deceived or defrauded. By the same token, Parliament or any of its constituent assemblies, councils or committees can act as complainant in a criminal matter.

“The appellant’s plea of guilty clearly and unequivocally admitted the above facts. He was correctly convicted. His appeal against the merits of this conviction is doomed to failure.”

It seems, therefore, the Tony Yengeni case may be indicative of how Shivambu’s misrepresentations and repeated lies in Parliament should be judged. Days after Scorpio’s first article accusing Shivambu of having benefited from stolen VBS money, he again misled Parliament, for the fourth time, saying:

“We are going to state here, categorically clear, without any fear of contradiction that the EFF and ourselves as members of Parliament never benefited anything from the VBS Mutual Bank looting and the so-called heist that happened there.” DM