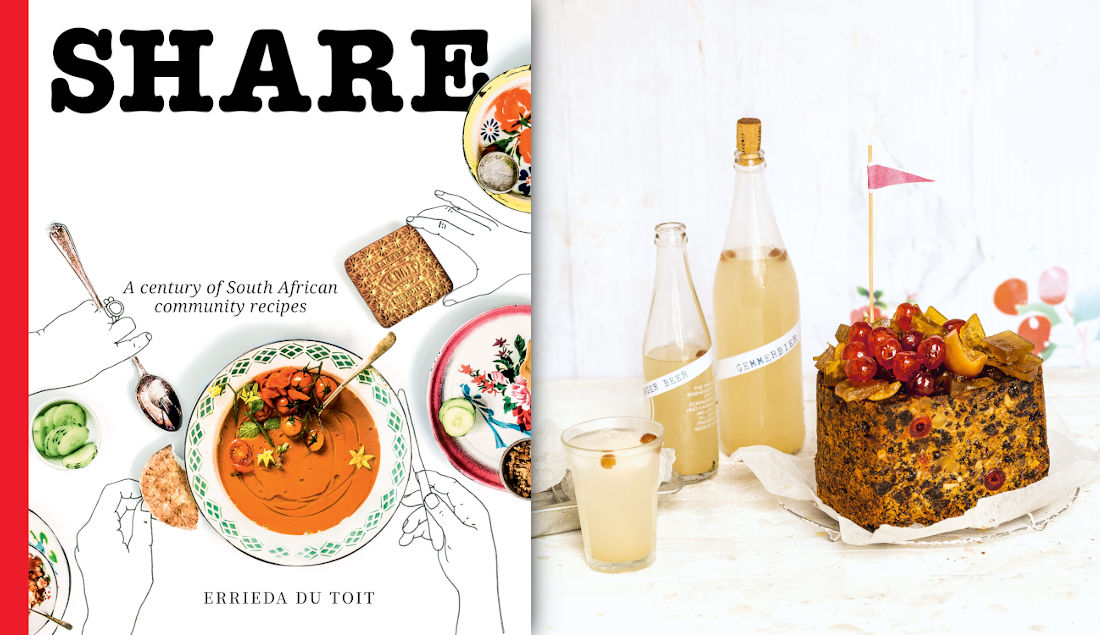 Get your nostalgia on this Christmas with a timeless fruitcake recipe and a batch of old-school homemade ginger beer.

Share: A Century of South African Community Recipes is a quirky tribute to those dog-eared, food-stained cookbooks shared down from generation to generation.

The book features a wide selection of recipes as generous, gracious and welcoming as the home cooks who shared them: the “keepers” (recipes known for their longevity), the “never-fails” (those epic recipes that never let you down), communal food for come-on-overs, retro classics, and those defining dishes and bakes treasured as heritage food.

So many bakers, so many fruitcake recipes. Older recipe books are a feast of glacé cherries, spices and candied mixed peel, everything that makes a Christmas cake the most celebrated cake of the year. People share recipes for dark fruitcakes drenched in brandy, light ones that sparkle with golden sultanas, pineapple and apricots, Dundee cake with marmalade, and luxury fruit loaves that can be eaten on the same day. There are even chocolate fruitcakes, midnight dark with all the dates, molasses, cocoa and coffee. With such luxurious ingredients you shouldn’t take a chance, but rather rely on a classic recipe like this one that’s been handed down from generation to generation.

Note: Soak the fruit the night before.

Place all the dried fruit, preserved ginger, cherries and candied mixed peel in a bowl and pour over half the brandy. Cover the bowl with clingwrap and leave to stand overnight.

Preheat the oven to 150°C. Line a large cake pan (28cm in diameter and 11cm high) with baking paper and grease with butter (see tip).

Beat the butter or margarine and sugar together until light and creamy. Add the eggs one at a time, beating well after each addition. Dissolve the bicarb and coffee in a little water and add to the egg mixture.

Sift together the flour, baking powder, mixed spice, nutmeg, cinnamon and salt. Add the soaked fruit to the flour mixture and stir well to cover all the fruit. Then add this to the egg mixture together with the nuts. Mix well.

Pour the batter into the prepared cake pan and bake for

3-3½ hours until a test skewer inserted in the centre comes out clean. Pour the remaining brandy over and let the cake cool in the pan. Once cool, remove it from the pan and wrap it in clingwrap and then aluminium foil.

Mix everything, except the raisins, together and stir until the sugar has dissolved. Pour into 2-litre cooldrink bottles and place 6 raisins in each bottle. Close tightly and leave to stand until the raisins rise to the top.

Errieda du Toit is a Cape-based food writer and author of 10 cookbooks. Her long-running radio show, food columns in newspapers and magazines, television appearances and talks have established her as a cheerleader for South African home cooking. Her blog Huiskok (HomeCook) is filled with stories of the food of our childhood and recipes passed down through the generations.