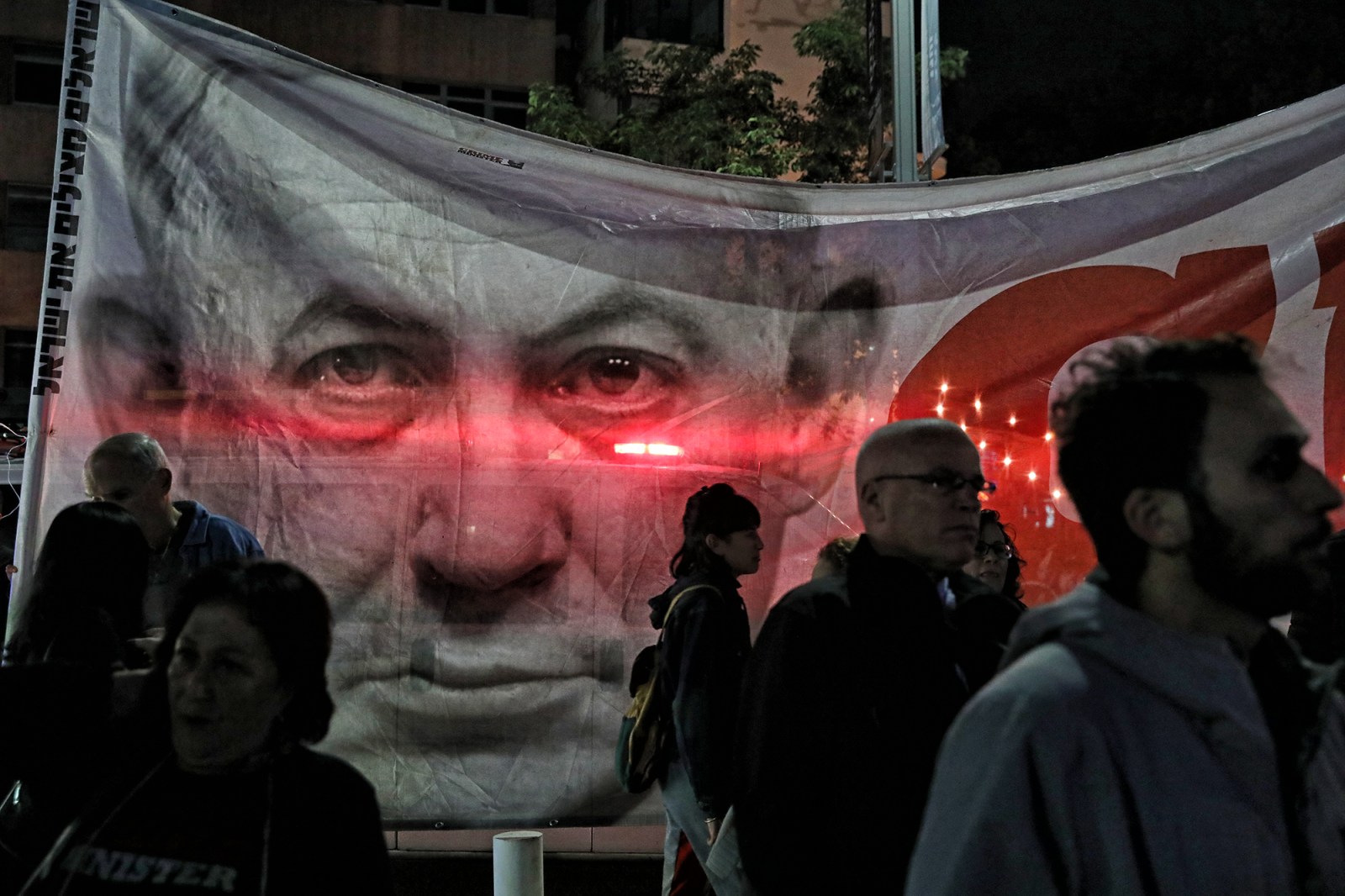 Protesters attend a demonstration in support of law enforcement and Attorney General decision to charge Benjamin Netanyahu with corruption cases in Habima Square, Tel Aviv, Israel, 23 November 2019. Reports on 21 November 2019 state Israeli Prime Minister Benjamin Netanyahu has officially been charged by the attorney general in a number of corruption scandals. Netanyahu was charged with bribery, breach of trust and fraud. EPA-EFE/ABIR SULTAN

Bribery and fraud charges against Israeli Prime Minister Benjamin Netanyahu have divided public opinion over whether he should stay or go. There’s also the possibility of a third election in less than a year, with too few Israelis apparently caring about how the elected leaders should resolve the country’s issues with Palestine.

In the middle of the two-way road that curves past beleaguered Prime Minister Benjamin Netanyahu’s home in the centre of Jerusalem, two men almost came to blows on Sunday night, 24 November 2019. Up to that point the two opposing groups of protesters, totalling about 200 to 300, were standing on opposite sides of the road and across the political divide, shouting slogans at one another.

All the while police officers were doing their best to keep the road clear. The ones calling on Netanyahu to resign and stop his alleged corruption formed the smaller group (the big group protested in Tel Aviv) just in front of his home and those waving Israeli flags and flashing posters with slogans such as “Stop the coup”, “Israel is strong with Netanyahu”, and “Netanyahu, Likud, forever and ever” were in the bigger group opposite.

When the pro-Netanyahu group spilled past the fence, marching across the road to meet the others waving placards and middle fingers, some minor scuffles broke out. Bar Landy, a tall and lanky marine biology student who was protesting against Netanyahu, almost planted the first blow on a pro-Netanyahu protester.

“I tried to tell him that, some years ago, when someone else was charged with bribery, Bibi (Netanyahu’s nickname) said he should step down, so why doesn’t he step down now that he’s in the same place that the other minister was?” Landy said.

“It got almost physical when they shouted ‘you’re a traitor’, ‘you’re a so-and-so’. So I asked the guy, ‘where did you go to the army’. He said he didn’t go, so I was like, ‘that’s it’. He can’t be calling me a traitor when he didn’t go to the army and I did!” said Landy, who was in the navy. (Israel has military conscription, but makes exceptions on religious or medical grounds.)

Landy supports the centre-left Labour Party, popularly known as Avoda, but, like many other anti-Netanyahu protesters, said he wouldn’t mind if the governing Likud remained in power, as long as Netanyahu was replaced. The lack of a government – it was dissolved in December 2018, ahead of the elections – meant that social services could not get the money needed to operate and hospitals were in a crisis, he said. This was a problem.

Livnat Barkan, a language teacher, held up a poster calling for clean government.

“We want honest and not corrupt people in government,” she said. Since this has been a growing concern for her, she started joining in the regular anti-corruption protests a few months ago.

Israeli politics is hardly dull, but even by their own standards Israelis currently find themselves living in interesting times. Netanyahu was indicted with bribery, fraud and breach of trust on Thursday, a first for a serving Israeli prime minister. On top of this, two elections in the past year, in April and September, have failed to produce a clear majority. Neither Netanyahu, who has been prime minister since 2009, nor his main challenger, centrist Benny Gantz, have managed to pull together a government with the smaller parties.

Netanyahu might find himself spending time in the court buildings near his office in Jerusalem soon. The Movement for Quality Government in Israel, on Sunday asked the Supreme Court to force Netanyahu to resign or temporarily recuse himself from his duties, Reuters reported. The watchdog said the criminal charges against Netanyahu constituted “the crossing of a red line and a grave blow to public trust in ruling institutions”. It’s not immediately known when the court will rule on this.

Netanyahu last week described the charges against him as an “attempted government coup” and demanded “the investigators be investigated”. He also attacked the law enforcement agencies by saying while he has “great respect” for the country’s judicial system, “something not good is happening to the police investigators and the state attorney’s office”. When he opened the weekly cabinet meeting on Sunday, however, he made no mention of his woes and spoke about Israeli security issues.

South African-born Israeli author and former journalist Benjamin Pogrund said on Sunday that despite criticism from within the party a few days ago, it appeared that Likud would fall in behind Netanyahu.

“We could have a third election early next year (2020),” he said. Few Israelis, however, have the appetite for this, and those on the right might turn against Likud, Pogrund speculated.

He said the September election – which produced no clear majority – was very much a “personal election on whether Netanyahu should be prime minister or not. The differences between the main parties aren’t all that great,” he said. “The distressing thing, however, is that the big issue, the Palestine issue, hardly features in any way. That’s very wrong because until we resolve that issue we will always have problems.”

Both Netanyahu and Gantz, for example, have welcomed US President Donald Trump’s claim that Israeli settlements in the West Bank are not illegal. South Africa’s pro-Palestinian government rejected Trump’s claim on Sunday, saying these settlements were against international law and an obstacle to peace talks.

Pogrund said the Israelis “have grown arrogant because we are in control, and for a small nation punch far above our weight”.

The unqualified backing from Trump has “intensified our hubris. We are not bothering to try to pursue peace”.

Khalil Shikaki, director of the Palestinian Centre for Policy and Survey Research, said surveys have shown that Israelis were happy with Israel’s status quo, with 76% describing it as “good” or “very good”. He blamed the continuing conflict with Palestine on a lack of leadership from both sides:

“If Netanyahu or someone like Netanyahu is elected or re-elected – we obviously don’t know what will happen with the indictment – but if attitudes are not different, [an election] will not make much of a difference,” he said.

Shikaki said the Palestinians were talking about having their own elections in the near future, and this would be an opportunity to provide “the system with legitimacy which it now certainly misses”. He said leaders without legitimacy, public acceptance, trust and credibility would not “be able to sell peace to these people”.

Meyer Lavin, a journalist who protested with the anti-Netanyahu group, said he hadn’t heard Netanyahu talk about a peace agreement in at least four years. Ultimately, however, many people were tired of Netanyahu. He said even though not much money was involved in the fraud and bribery claims, “people think [Netanyahu] stopped giving a shit and was becoming a king”.

He said Netanyahu’s leaving would do much more for stability than his staying:

“He has succeeded in creating an environment where he actually instils fear in people when, the second that he goes, things fall apart. This is sad, because those people are so convinced that they are dying the second Bibi steps away.”

Meyer did not want to venture a guess on what would happen in the next couple of weeks.

“It’s still playing out,” he said. “This can go in different directions. Everything is on the table, that’s why it’s so confusing.” DM

Carien du Plessis is in Israel on an information tour for journalists organised and paid for by the South African Jewish Board of Deputies.