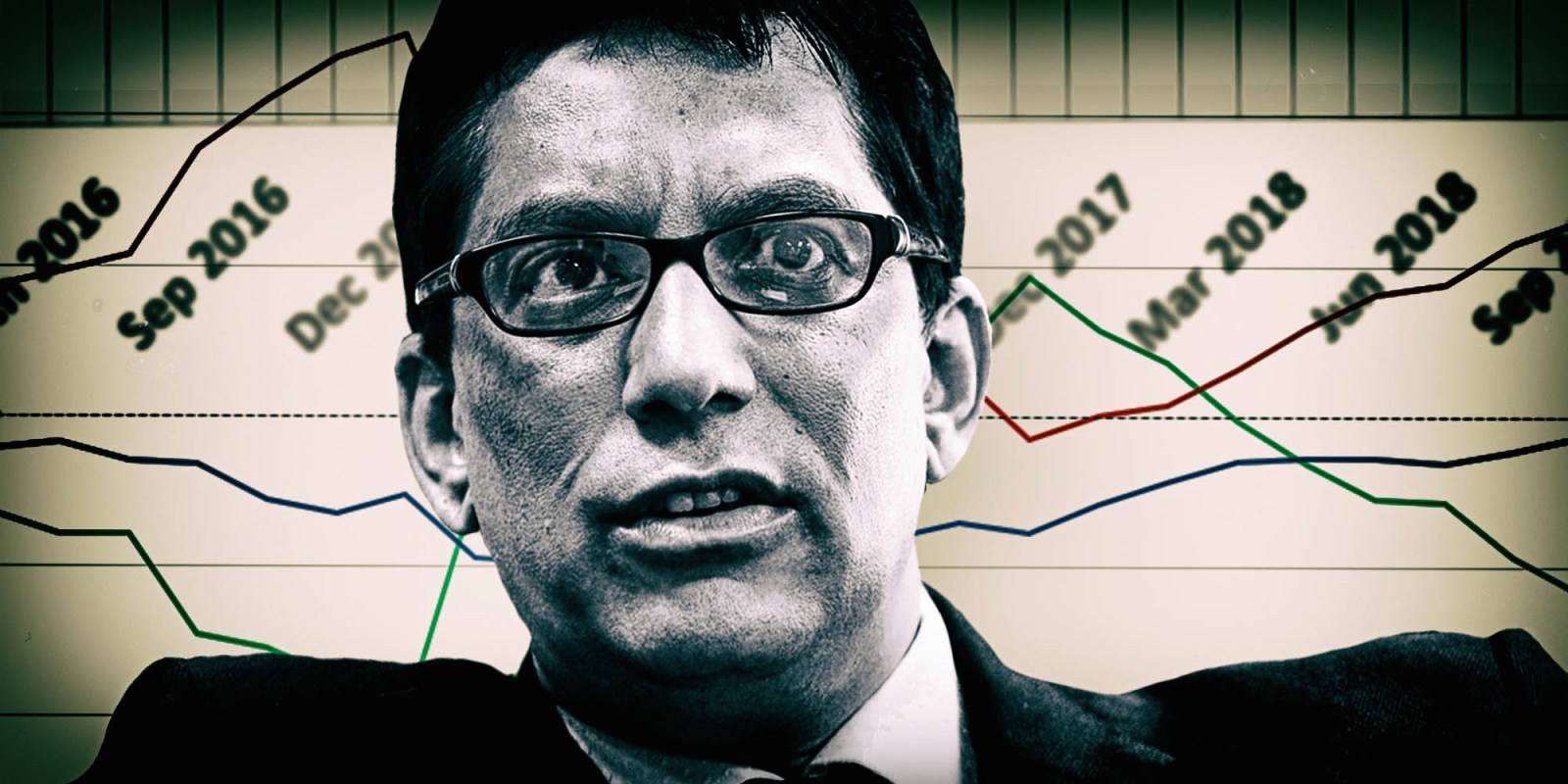 Pervasive and suspicious share-trading by Sekunjalo boss Iqbal Survé may give the financial watchdogs a rare slam-dunk in their highest-profile share manipulation case yet. But the embattled businessman is crying conspiracy, again.

From May 2018, Iqbal Survé, through two of his companies, completely dominated the trading of shares in Ayo Technology Solutions. Over months, practically no one but Survé’s family holding company, Sekunjalo Investment Holdings, and asset manager, 3 Laws Capital, bought shares.

Details of the trades have been laid bare in a Financial Sector Conduct Authority (FSCA) affidavit used to obtain a search warrant targeting Survé premises in October 2019. His companies are now challenging the warrant in the Western Cape High Court.

Survé’s domination of the market for Ayo shares was especially true during three months when the share price was the subject of a deeply flawed downside agreement that required minimum effort to squirm out of.

Being the only person interested in your own company – he is indirectly Ayo’s biggest shareholder by far – is, however, not a crime and Survé’s overwhelming role in the market for Ayo shares has been reported on before. He has denied market manipulation, saying that he simply sees Ayo as an “attractive long-term investment”.

More important, though, is the way in which Survé traded the shares, which can be an offence under Section 80 of the Financial Markets Act – carrying a fine of up to R50-million and imprisonment of up to 10 years.

The JSE referred suspicious Ayo trading to the FSCA, leading to the October raids. The FSCA has only successfully prosecuted or settled eight market manipulation cases in the past decade and none of those related to the owner of the company in question.

The FSCA is particularly interested in Survé’s trading during the operation of the downside protection agreement between his company African Equity Empowerment Investments (AEEI), which sold Ayo shares to the Public Investment Corporation (PIC), and the PIC.

The agreement required that the Ayo share price stays above R22 from 19 October 2018 to 19 January 2019, failing which AEEI would have to pay part of the difference to the PIC.

AmaBhungane has previously reported how Ayo’s share price was mysteriously maintained at just above R22 for that period and started its descent to the current level of R5.45 straight afterwards.

In a lengthy and technical affidavit motivating for the search and seizure warrant, FSCA investigator Alfred Shimati noted that there was a “notable increase” in Survé’s trading in Ayo shares during this period.

“It is reasonable to suspect that this potential liability … may serve as a motive to manipulate the Ayo share price,” he said.

Before raiding the offices of three of Survé’s companies in October 2019, the FSCA conducted an exacting study of what, on the face of it, was clear-cut manipulation of Ayo’s share price.

“Prohibited practices” under the Financial Markets Act (FMA) include at least three things the FSCA accuse Survé of doing.

Shimati’s affidavit spelled out the evidence using a sample of trading days.

On 25 May 2018 for instance, there was a yawning gulf between the prices at which sellers were offering Ayo shares and which potential buyers (other than Survé), were willing to pay. In practice, this amounts to there being zero real demand for the shares.

In the morning, the best bids were at R8.92 while the largest quantity of shares was bid for at only R1.03. People were only willing to sell them at R30. This was after Ayo shares had already tanked from R45 when the PIC invested in December 2017.

Survé kept this up throughout the day, sometimes putting in bids for Ayo shares three times higher than any other bids on the market. Thanks to Survé’s purchases, and his purchases alone, the Ayo share price had shot up to R43 in the course of the day. He put in a last bid of R40, which would have been the closing price, but he was too late and it was rejected by the JSE’s trading system.

“If Sekunjalo did not trade, it is highly probable that the Ayo share would have closed at R26.99,” Shimati said in his affidavit. Creating this kind of false impression of demand contravenes section 80(3)(b) of the FMA.

This pattern was repeated on the other days covered in the affidavit. On 29 May 2018, Survé also tried to buy a tiny amount of extra Ayo shares at R44.28 just as the market closed at R40 (also thanks to him).

“The significantly higher bid entered by Survé at or near the close of market and the higher price he paid for a small volume of shares give rise to the reasonable suspicion that … the primary purpose of which was to change the closing price of the Ayo share,” said Shimati.

30 November 2018, in the middle of the downside protection agreement, is particularly suspicious. Only Sekunjalo bought any shares that day. Dangerously for Survé, the share price was hovering at R22.25 – cents above the level it had to stay at.

Sekunjalo then spent the entire day buying tiny tranches of 100 shares at successively higher prices to get Ayo up to R23. It did the same thing for a number of preceding days.

Back at Survé Inc

These case studies secured Shimati a warrant to raid Survé’s Sekunjalo and 3 Laws Capital as well as AEEI, the listed investment vehicle he controls and is run by his brother-in-law, Khalid Abdullah. The raids on 9 October 2019 were not without incident. Among other things, Survé conveniently “lost” his cellphone when investigators needed it.

In a report following the raid, Shimati recorded that Survé had “temporarily disturbed” the search when he arrived on the scene.

“He [Survé] made allegations inter alia that the investigation of his Company was a political plot aimed at intimidating him and bringing his Company’s name into disrepute as well as to bring reputational harm to him personally. He submitted that had the documents been requested from him by the FSCA, he would have willingly produced them.”

The “missing” cellphone incident came with Survé accusing investigators of already taking it. “When he was requested to provide his cell phone, he responded that he did not know where his cell phone was. He stated that he arrived with the cell phone at the premises and that it may have been taken by someone from the investigating team.”

“Dr Survé again expressed that he did not have his cell phone with him and was unaware where it may have vanished to … When attempts were made by one of Sekunjalo’s Attorneys to call his cell phone, it went straight to voicemail.”

There were also clumsy attempts to stop the raid. The company the FSCA uses to clone hard drives, Exactech, wrote up “investigation diaries” throughout the day to register noteworthy events. Two of these, relating to the copying of hard drives, said that a “company representative” came and physically pulled the machine’s plug out of the wall “even though we advised them … it might destroy the hard drives”.

Survé has applied to the Western Cape High Court to have the warrant for the raid scrapped and all seized records returned; alternatively that some of it be returned on the grounds that the FSCA seized more than it was entitled to. A separate case was filed by AEEI, through which Survé controls Ayo.

Survé argues that the raid was an unconstitutional infringement of his privacy as there were less invasive means of getting the information – like asking him for it.

He also claims that judge Patrick Gamble, who gave the FSCA the warrant, was not given the full facts. What was allegedly withheld is that Survé had earlier lodged his own complaint to the FSCA claiming that conspirators were intentionally driving down the share prices of not only Ayo, but also AEEI and his other listed company, Premier Fishing and Brands.

Survé had previously met with the FSCA and been very willing to discuss his own allegations. Even though this is completely unrelated to the JSE complaint that led to the raid, Survé says this demonstrates he would also have cooperated when the tables were turned.

In his affidavit, Survé again alleged a conspiracy against him.

“There may be asset managers and/or hedge funds working with the media to short the shares of the JSE-listed companies, i.e. by employing a strategy aimed at creating the impression that the shares were losing value in order to try to get unsophisticated shareholders to sell their shares in order to further lower the share price,” he said.

Although the FSCA investigation only covers the period up to the end of February 2019, JSE market data shows that both Sekunjalo and 3 Laws have kept on buying Ayo shares through the year. They still dominate the market.

Survé has previously defended his dominance in the market for Ayo shares.

“The Sekunjalo Group is an investor in many companies on the JSE and sees Ayo as an attractive long-term investment. Sekunjalo generally invests in companies and takes a 5- to 10-year view like Warren Buffet, Berkshire Hathaway,” he said by Whatsapp as far back as September 2018. DM