An end of an era: Bank of Lisbon – a site of tragedy – destroyed 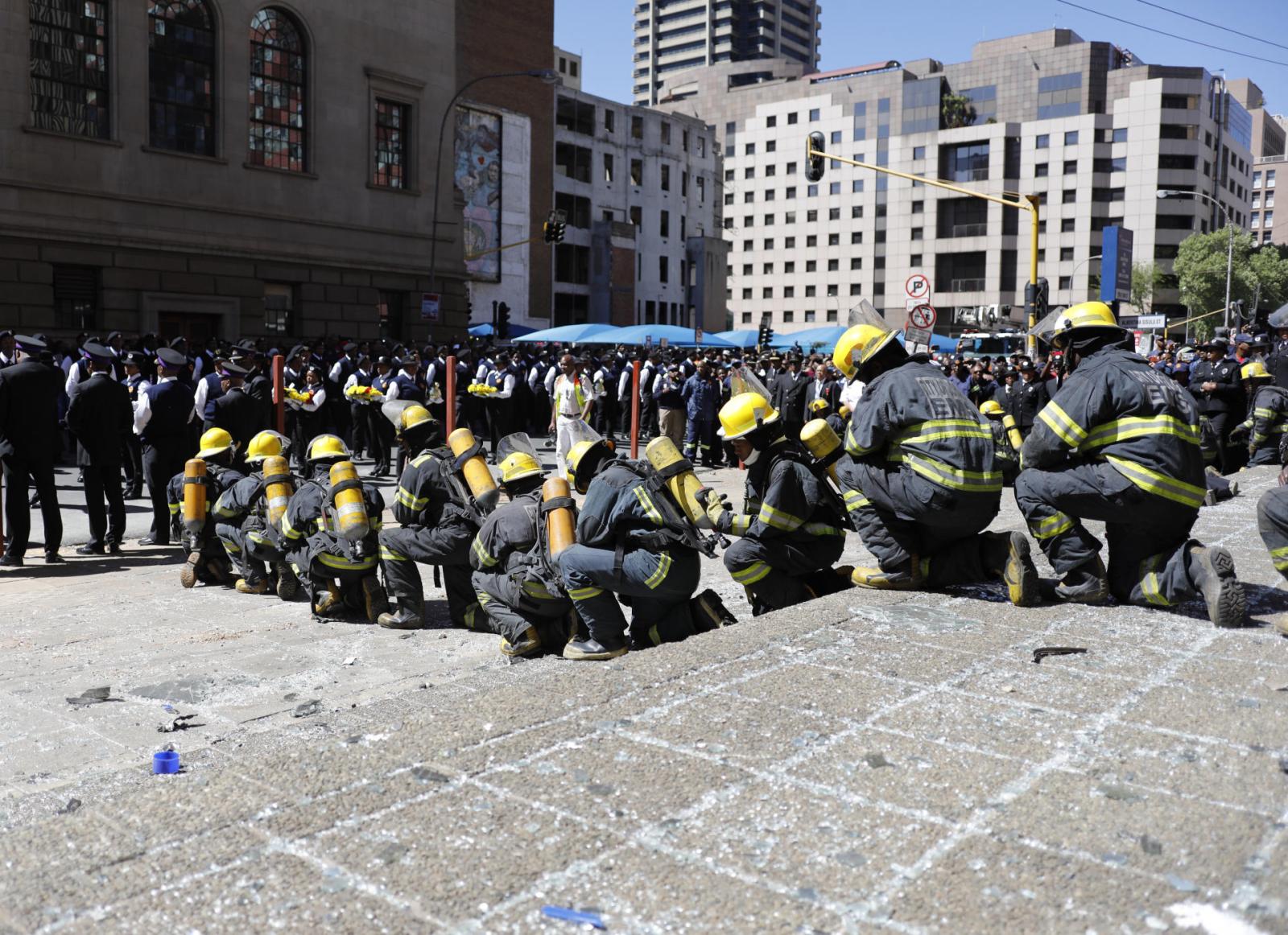 Archive Photo: Firemen kneel during a memorial and wreath laying ceremony for the three fire fighters who died fighting a fire in the building above the memorial, in Johannesburg, South Africa, 12 September 2018. The three firefighters, Simphiwe Maropane, Khathutshela Muedi and Mduduzi Ndlovu died while fighting a blaze in the Bank of Lisbon that broke out on the 23rd floor. No civilians died in the blaze which has left the building largely gutted. EPA-EFE/KIM LUDBROOK

It was an emotional moment for onlookers as they watched the demolition of the Bank of Lisbon building in Johannesburg on Sunday.

Last year firefighters Simphiwe Moropane, Mduduzi Ndlovu and Khathutshelo Muedi died as they battled to put out a fire that had  engulfed the building in September 2018.

As the building came down in a loud rumble, the three were in the thoughts of those watching.

“It was tragic what happened to those men,” one onlooker remarked as she wiped a tear from her eye and shook her head.

The Gauteng provincial government made the decision to implode the building after a structural assessment was conducted, following the fatal fire.

Addressing the media after the demolition, MEC for Infrastructure Development and Property Management Tasneem Motara said the families of the deceased men will be at the top of everyone’s minds as they move forward with new plans for the area.

“This brings us to what is the end of an era, really.”

She added that, while the demolition was a success, the 31-storey building had been one of the hardest demolitions to plan.

“Our experts are quite proud to claim that this was probably one of the most difficult demolitions that they’ve had to work on, even world wide,” she said.

Joe Brinkmann, managing director of Jet Demolition and the blaster of the building, explained that there were major risks involved.

“You had a very high structure and very close proximity to other structures… the total height of the building was 108 metres so you had a great risk of rubble impacting buildings nearby.”

Altogether 894kg of explosives were used to bring the building down. The department has already spent R90m of its R114m budget on the task.

While the Johannesburg CBD is currently covered in dust, Motara said things should be back to normal by Monday.

Officials have already started to clear the rubble. DM