Joint operations centre set up to quash platinum belt u... 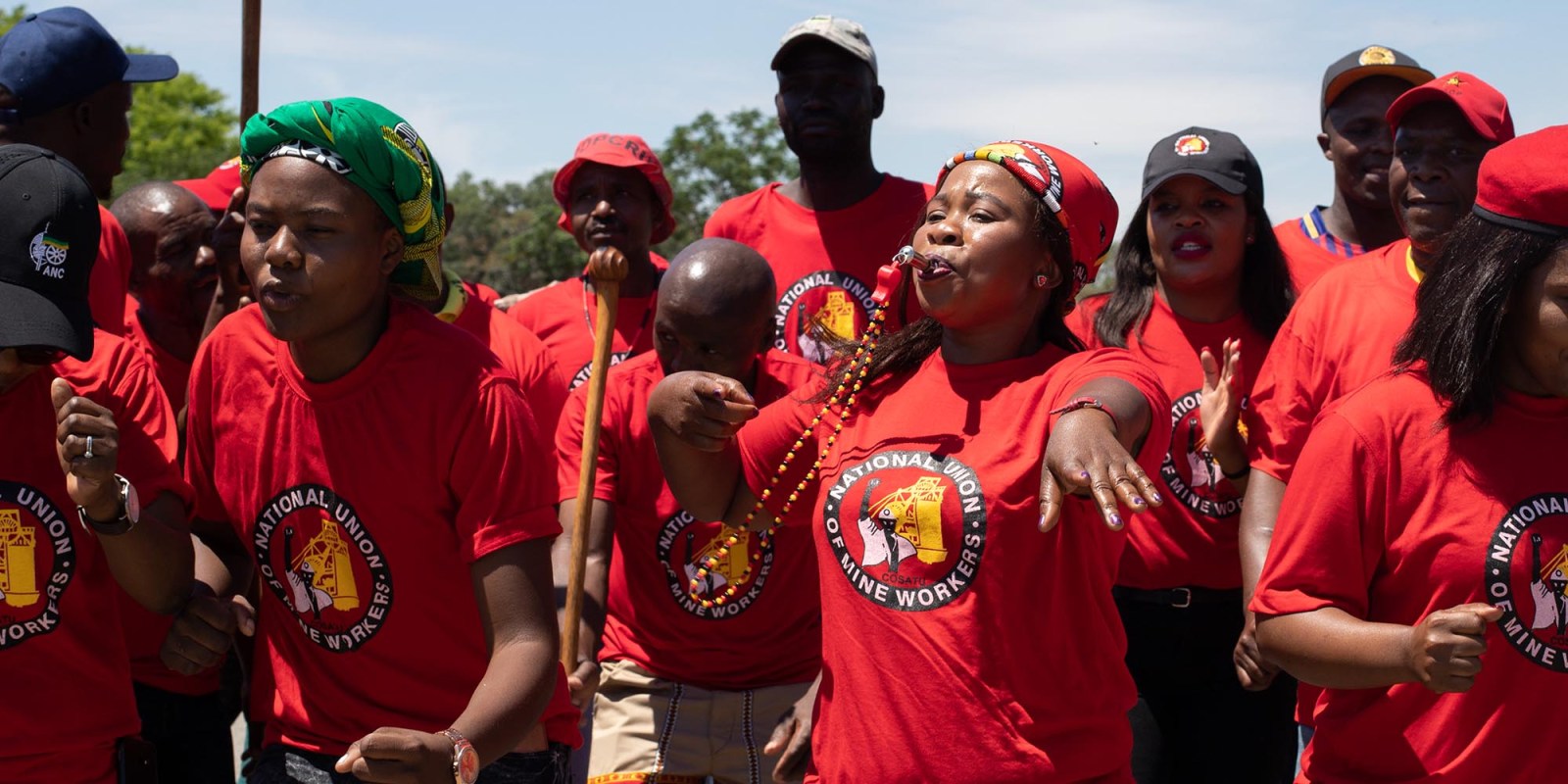 NUM supporters sing outside the union's rally in Marikana on 17 November 2019, the first significant event NUM has held in the area since the 2012 Marikana massacre. (Photo: Greg Nicolson)

In the face of escalating community unrest on the eastern limb of the platinum belt, the Minerals Council and the police plan to set up a joint operations centre in the region. Data suggests the area is in a state of worsening social turmoil amid sky-high unemployment and conflict over resource control.

The eastern limb of South Africa’s platinum belt, which curves up from Lydenburg in Mpumalanga before cutting an arc across a swathe of Limpopo, is in flames. It may sit upon some of the planet’s richest platinum group metals and chrome deposits, but the wealth that has been generated from beneath the soil has clearly not been spread widely enough.

The data speaks eloquently for itself. In April last year, Reuters reported that over the course of 2016, 2017 and the first three months of 2018, the region had been hit by more than 400 incidents of social unrest that had an impact on mining operations. These included 225 roadblocks, 107 illegal marches, and 40 wildcat strikes.

Things have since gone from bad to worse, even as the platinum industry itself has turned a corner to become more profitable while averting a strike, with the biggest producers signing wage deals last week. According to Minerals Council data, for all of 2018, there were around 260 such incidents in the region, and in the first six months of this year, a jaw-dropping 330.

The target of the discontent varies: service delivery protests against corrupt and incompetent local governments disrupt mining operations, while tribal authorities have been the subject of community wrath over suspicions about the dispersal of revenue payments. Demands for jobs are another trigger in a region that mining sources say has an unemployment rate of close to 80%, more than double the appalling national average. Turf wars over local procurement contracts are a further flashpoint, and the mining companies themselves can be in the crosshairs of community anger. Then there are intermittent wildcat stoppages by employees, with union rivalry simmering in the background.

Some incidents are over in a matter of hours with minimal fuss, others rumble on violently for days.

“The Minerals Council and companies operating in the area are working with the SAPS on the establishment of a joint operations centre in the region that will be able to monitor events and initiate action when necessary. The companies will assist with equipping the facility,” said Tebello Chabana, the senior executive for public affairs and transformation at the Minerals Council South Africa.

There is no hard data on the amount of production that has been lost, but the unrest is clearly costly to companies, with mounting outlays on security also denting margins.

In 2017, Impala Platinum’s (Implats) Marula operation in the region was on the verge of closure because of community protests sparked by a chrome project set up with a local tribal authority that went sour amid perceptions that the revenue flows were not transparent. The terms of the project were then renegotiated to make it more transparent. But flare-ups still occur around the mine and it was shut for a week in March by community protests.

For platinum producers operating in the area, the problem, like Eskom and policy uncertainty, has become perennial.

“It’s a concern. It’s effectively become a day-to-day management issue,” Paul Dunne, CEO of Northam Platinum which operates the mechanised Booysendal mine in the area, told journalists at a media lunch on Thursday.

“The underlying issue is lack of opportunities. One of the compounding factors is the service delivery issue, but the mines have become the focal point,” he said. Booysendal is actually expanding, with 2,000 new jobs in the pipeline, but that is a drop in a growing bucket of economic deprivation.

On the platinum belt, a joint operations centre may help to quell or nip some unrest in the bud – though any heavy-handed response could potentially evoke painful memories of Marikana, and the Minerals Council notes that it is in no way intended to prevent lawful protest activity. Ultimately, dousing the flames of social unrest will require faster economic growth, increased job opportunities, transparency in deals made with local authorities, and vast improvements in local governance, among other things.

Expect things to get worse before they get better. BM