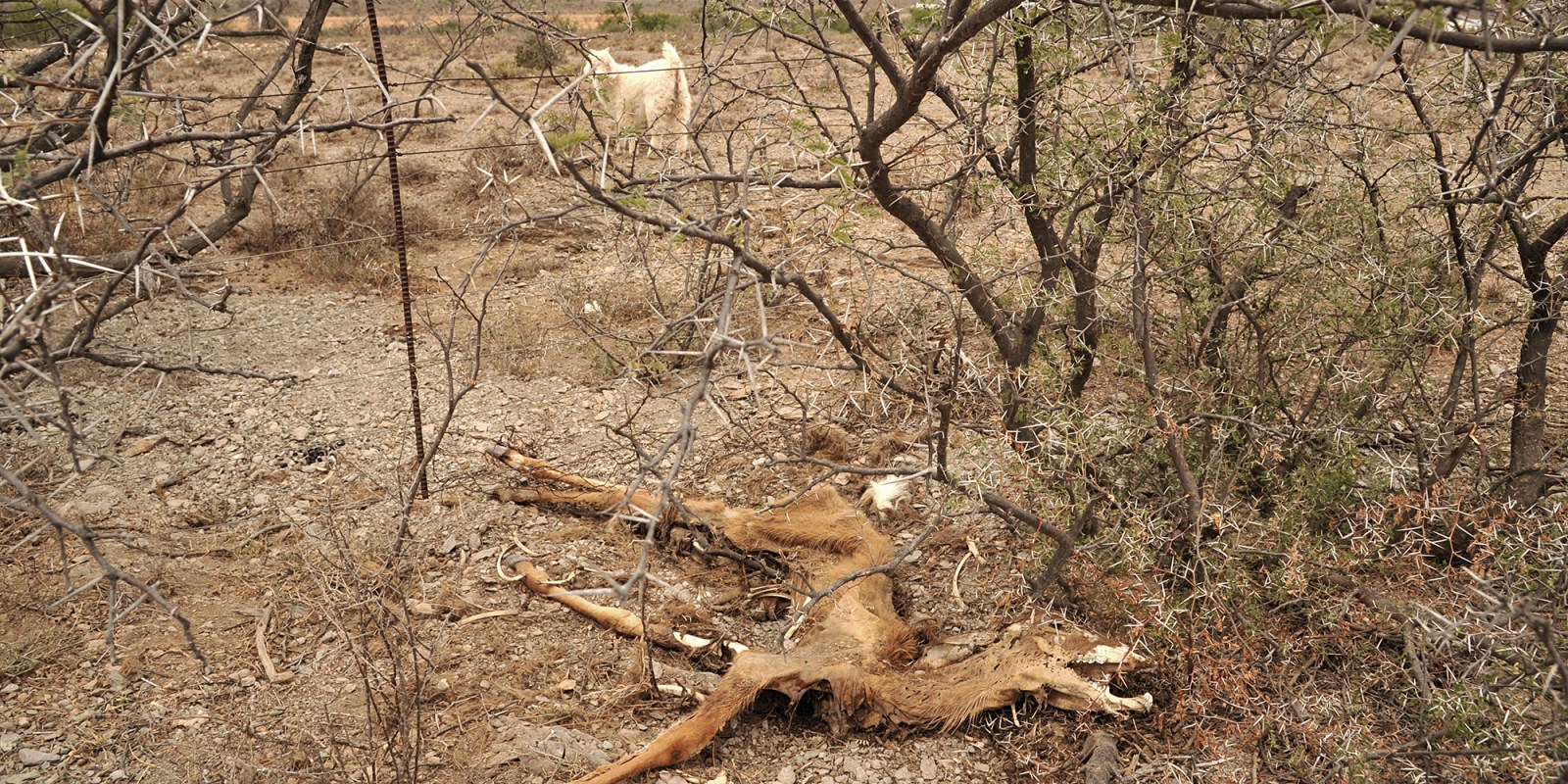 Farmers in the Karoo often find dead animals who have succumbed to the drought on their farms. (Photo: Mike Holmes)

The Eastern Cape government has requested more than R600-million in drought funding from the national government – mostly to save the province’s livestock sector. However, the provincial government’s budget for boreholes and dams has been questioned for being way too expensive.

With “conservative” estimates of losses in the livestock sector in the province topping R6-billion and threatening thousands of jobs; and grain production predicted to be down by a quarter, the picture painted by the Department of Rural Development and Agrarian Reform is a bleak one. Premier Oscar Mabuyane declared the province a drought disaster area on October 29.

Massive parts of the province are currently classified as being in a severe and extreme drought disaster. Hardest hit is the Raymond Mhlaba district, including the towns of Adelaide, Alice, Balfour, Bedford, Hogsback, Katberg and Middledrift, with 85% of the district in an extreme drought. According to the department, R121-million worth of fodder will be sent to this area.

There is currently R33-million available for emergency fodder in the province with another R74-million in grant funding awaiting approval.

The second worst area is the Blue Crane district centred around Somerset East and including the small Karoo towns of Cookhouse and Pearston, with 77% of the district in an extreme drought.

Using the same measure, 65% of the Dr Beyers Naude Local Municipality, including Graaff-Reinet, Jansenville, Klipplaat, Willowmore, Aberdeen and Steytlerville, is in a severe and extreme drought. Dams in Baviaanskloof, included in this district, are currently at 0%.

Chief directors in the Department of Rural Development and Agrarian Reform, Felix Hobson and Leon Coetzee, estimate the loss in livestock production alone to be R6.4-billion, including a three-year recovery period once the drought is broken. According to the department, the ongoing drought also delayed soil preparation and it is estimated that the production of grain crops will drop by 25%.

The deadline for farmers to apply for drought relief assistance is Friday 22 November. Department spokesperson Ayongezwa Lungisa said the application process was going well. The department has made R74-million available to provide fodder for animals. Commercial farmers will be assisted on a 70/30 basis, with the farmers paying 30% of the cost, and emerging farmers on a 90/10 basis.

The spokesperson for Agri Eastern Cape, Doug Stern, said he believed many farmers would apply for drought relief.

According to the presentation, the department has received R20-million from the Department of Cooperative Governance and Traditional Affairs for a dam scoping project in the province and will apply for R111.5-million in funding for new boreholes and repairing old ones.

The department explained that this included geohydrology costs and the cost of equipping the boreholes with wind-powered electric pumps, water storage equipment and troughs.

The Department of Rural Development and Agrarian Reform said it would apply for R455-million for emergency fodder supplies to ensure the survival of “core” herds and flocks.

According to the Department of Water and Sanitation’s latest figures, there are currently four completely empty dams in the province. These are the Beervlei Dam in Baviaanskloof, the Bonkolo Dam near Queenstown, and the Gcuwa and Xilinxa dams near Butterworth.

The Commando Drift Dam and the Lake Arthur dams near Cradock have less than 2% water left and the Toleni Dam near Butterworth only 1.4%. MC