An appeal for Sudan’s future 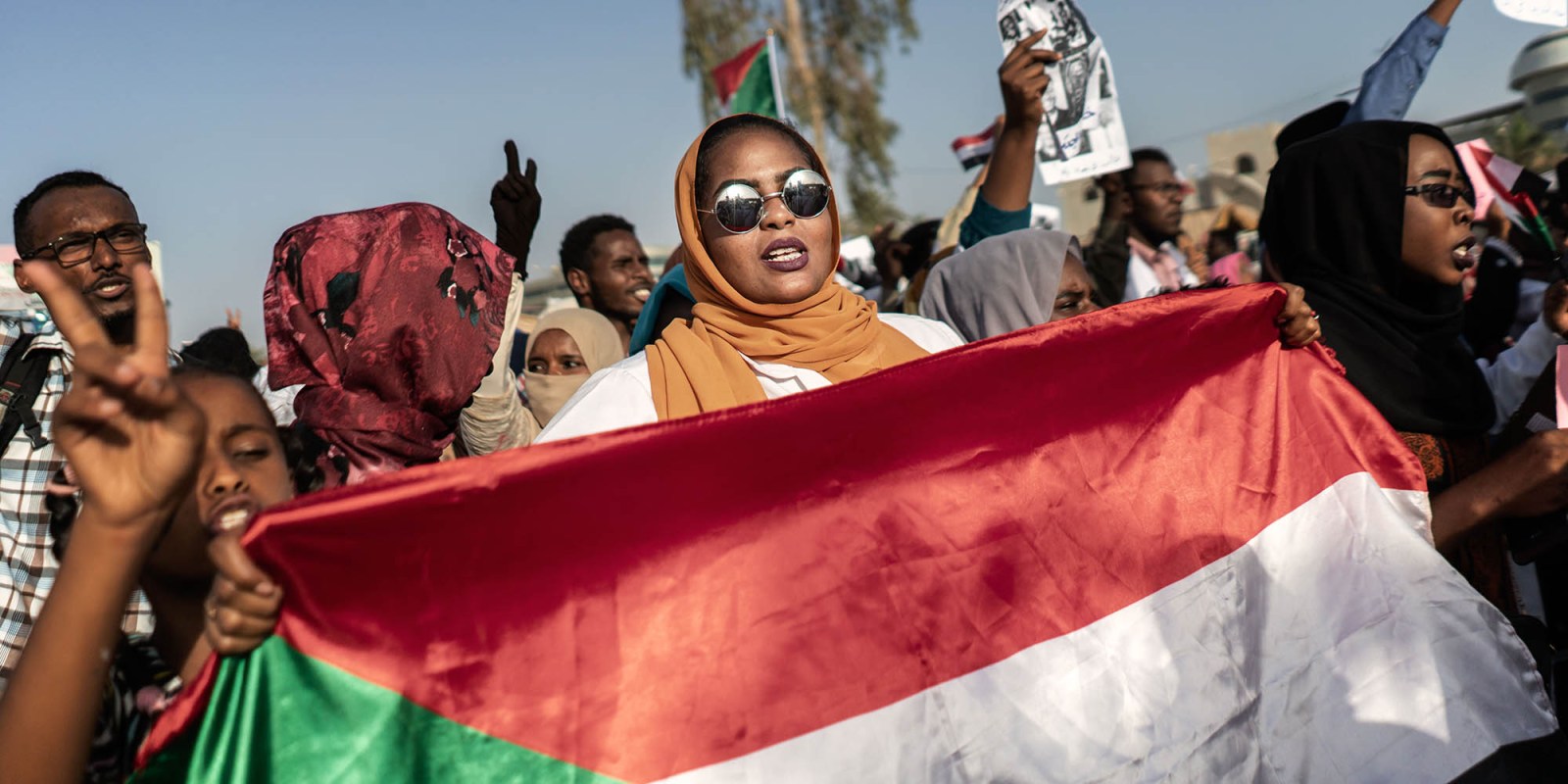 A protester holds a Sudanese national flag during a demonstration against the military junta outside the Defence Ministry in Khartoum, Sudan, in April 2019. (Photo: Fredrik Lerneryd / Bloomberg / Getty Images)

Sudan today is on a knife-edge: it can evolve toward peace and democracy, or spiral into instability and violence. Vital and timely international assistance can make the difference between success and failure for the new government.

On 19 December 2018, peaceful protests erupted spontaneously in cities across Sudan. Just four months later, the brave demonstrators succeeded in ousting the despotic regime of Omar al-Bashir, who had ruled the country for 30 years. Remarkably, it was Sudan’s most oppressed social groups — women, young people and ethnic minorities — who led the way.

In August 2019, Sudanese civil-society and military leaders signed the Draft Constitutional Declaration. This power-sharing agreement paved the way for the formation of a transitional government that will serve for three years and three months, at which time Sudan will hold a democratic election.

The new government includes the country’s first female chief justice, two female members of the Sovereignty Council, and its first female foreign minister (one of four women in the Cabinet). It also includes several technocrats — most notably the prime minister — who have worked for international organisations.

The partnership between civilian leaders and the military has saved the country from a protracted and deadly civil war. The new government’s three urgent priorities are to resolve Sudan’s ongoing internal conflicts, resettle millions of internally displaced people, and rebuild the country’s devastated economy.

Today, destitution is rampant after three decades of mismanagement, corruption, war and internal division. According to the International Monetary Fund, Sudan’s GDP per capita in US dollar terms has declined by half since 2013. Moreover, the IMF expects the economy to contract by 2.6% in 2019, with inflation exceeding 50%. Unemployment is above 20%, and Sudan’s gross government debt is more than 200% of GDP.

Internal peace now depends on finding solutions to Sudan’s huge challenges. Sudan has suffered a catastrophic loss of export earnings from oil since 2011, because the bulk of its oil production was located in what is now South Sudan, which became independent after a referendum backed by the Western powers. As a result, the country urgently needs to establish new industries and modernise its vast agricultural sector.

Sudan today is therefore on a knife-edge: it can evolve toward peace and democracy or spiral into instability and violence. In our respective careers, we have seen both types of outcome. In Poland, one of us (Sachs) watched and participated in the consolidation of democracy and the restoration of economic growth after the country’s communist regime collapsed 30 years ago. Yet both of us also have witnessed bad situations becoming even worse, as unfulfilled expectations, demagoguery and ethnic strife led to years of violence, instability and economic collapse.

We are therefore appealing to the world to show solidarity with Sudan following its recent triumph over despotism. We know, of course, that the global attention span for faraway countries is short. Most of the focus today is on uncertainties in global trade and finance, rising tensions among major powers and important upcoming elections in several countries.

Nonetheless, we ask the world to give a moment’s attention to an impoverished country of 43 million people, whose greatest natural resource today is renewed hope for the future. If Sudan succeeds, it will help to stabilise the Horn of Africa and the Middle East. Should it fail, the resulting instability could engulf many other countries. Vital and timely international assistance to Sudan can make the difference between the success and failure of the new government’s reforms.

Most urgently, Sudan needs the United States government to remove regulatory barriers to commerce, finance, and the movement of people. In particular, the US should lift immediately its designation of Sudan as a state sponsor of terrorism, a holdover from the Bashir era, so that the Sudanese government can address some of the country’s pressing needs.

The new government has quickly brought forward the Sudan Economic Revival Plan, a reform strategy for the years 2020-2030 that is based on the United Nations Sustainable Development Goals. Under the plan, the government intends to direct its scarce budget revenues toward education, health and basic and sustainable infrastructure.

To succeed, Sudan’s government must not only raise domestic revenue, but also shift spending away from servicing Bashir-era foreign debt and toward public services and infrastructure. For that reason, Sudan needs immediate debt relief and the ability to access new funding from the World Bank and other international financial institutions.

Since the mid-1990s, dozens of lower-income economies have benefited from debt relief under the IMF-World Bank Heavily Indebted Poor Country (HIPC) program. But with Bashir in power, Sudan was excluded from this initiative. Now that he is gone, the new government is appealing to the IMF, World Bank and international creditors to permit Sudan to benefit from HIPC debt relief and thus enable the country to make a fresh financial start.

Thirty years ago, Poland was granted relief on its communist-era debts, laying the foundation for subsequent growth. Sudan now has a similar need for debt relief.

The challenges facing Sudan seem insurmountable to many observers within and outside the country, and sceptics believe grave economic and political turmoil is inevitable. But the Sudanese people remain hopeful. They, and we, believe the country can become a democratic role model for the region, showing how a popularly backed government can restore stability, launch reforms and achieve sustainable development.

Sudan’s innovative, ethnically diverse, peaceful and politically engaged people — and in particular its youth and women — are free from oppression as the result of their own brave efforts. Now, they ardently desire a better future. To quote the Tunisian poet Abu al-Qasim al-Shabbi, destiny must answer their call. BM

Ibrahim Elbadawi is the Sudanese minister of finance and economic planning.