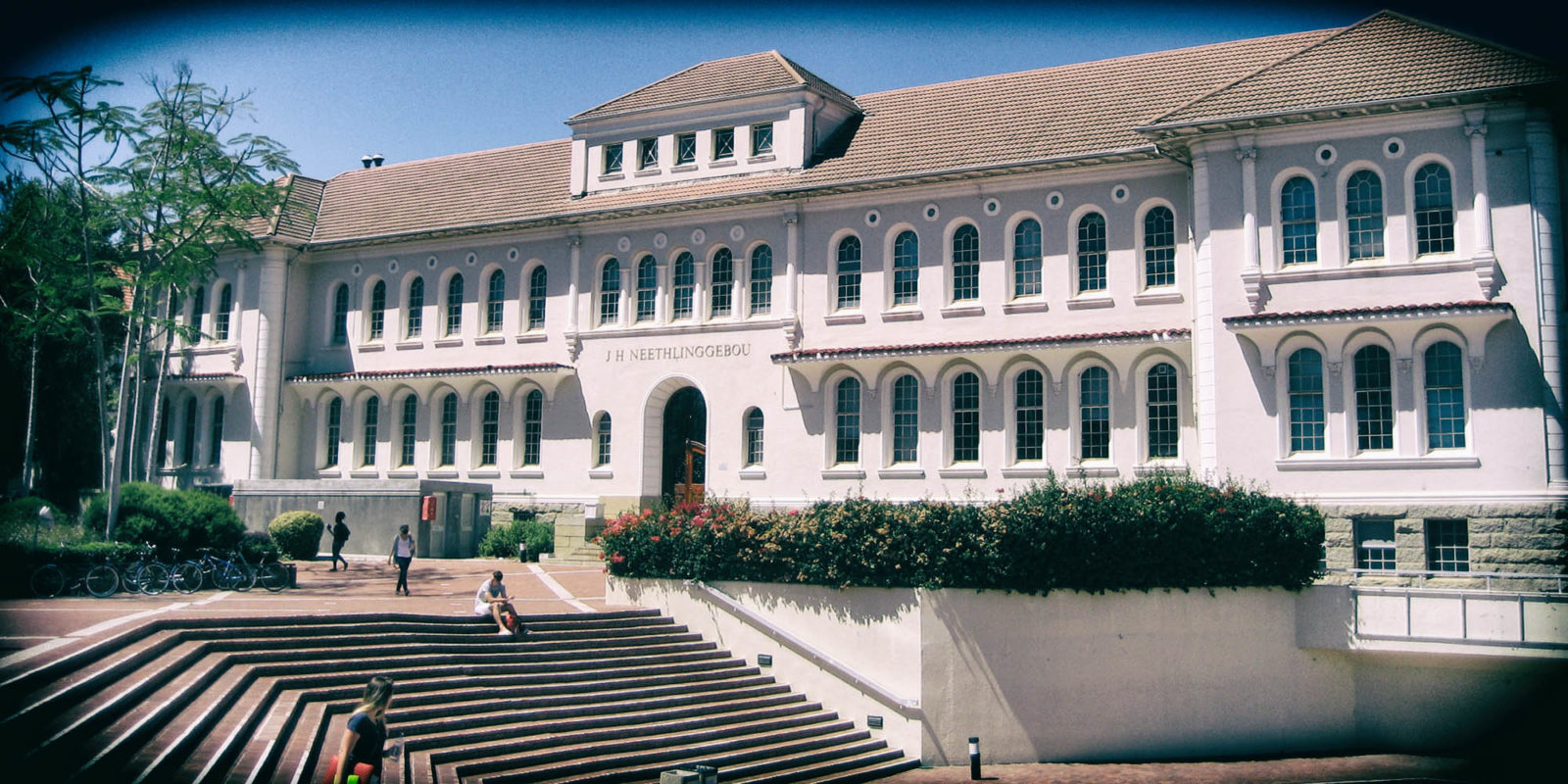 Living in Stellenbosch, I am sensitive to the emotions that accompany the decline of Afrikaans as a high-level cultural medium. This constitutes an obvious cultural ‘cost’ for those who were previously able to use their ‘mother tongue’ at this level.

The court dismissed the case presented by an Afrikaans interest group called Gelyke Kanse (Equal Opportunities), which had sought to appeal against an earlier judgment by the Cape High Court. Gelyke Kanse argued that the 2016 policy deprived Afrikaans speakers of the right to mother-tongue education and called for the reinstatement of the University’s 2014 policy, which had granted equal status to English and Afrikaans as languages of learning and teaching.

This judgment comes less than two years after a related ruling involving the University of the Free State (UFS). AfriForum had challenged the University’s revised language policy, which had made English the primary medium of undergraduate instruction. In December 2017 the Constitutional Court dismissed AfriForum’s application for leave to appeal against an earlier judgment by the Supreme Court of Appeal.

In this, the first of two articles, I explore these judgments and the recent higher education context that produced them: the post-2015 context of student protests and financial duress. The second article will show how these two judgments cap a longer-running trend at historically Afrikaans universities. The legal debate pivots around Section 29.2 in our Bill of Rights, which qualifies the right to choose an official language at public educational institutions in terms of what is “reasonably practicable”.

This constitutional right is specifically qualified in terms of three criteria: equity; practicability and “the need to redress the results of past racially discriminatory laws and practices”. In both cases, the Constitutional Court argues that “reasonably practicable” involves “both a factual and normative (constitutional) element.” I am not a specialist in the field of constitutional law, and for this reason, my analysis sidesteps legal debates on whether the new university language policies are “reasonably practicable” and on the extent to which the two universities offered “appropriate justification” for their decisions.

I am, however, very interested in the “factual” or contextual aspects. My sociological analysis will show that the overarching constitutional qualification of language rights in terms of what is “reasonably practicable”, is consistent with medium to long-term empirical trends in our university system.

Both Constitutional Court cases saw historically Afrikaans universities successfully defending decisions to reduce the status of Afrikaans, in the face of legal challenges brought by Afrikaans language interest groups. While there are broad similarities between the two university contexts, the sensitive and complex nature of the language debate (overwhelmingly manifested in the Afrikaans press as the taaldebat) is suggested by the fact that these two cases produced five separate judgments.

It is necessary to situate the two Constitutional Court cases within the recent context of the 2015/6 student protests that rocked South African institutions of higher learning. In March 2015, a student movement called Rhodes Must Fall (#RhodesMustFall) was formed at the University of Cape Town, and this inspired numerous “Fallist” movements at other universities – including a mass sector-wide campaign against student fee increases (#FeesMustFall).

A subset of these movements emerged at historically Afrikaans universities, where Afrikaans as an undergraduate medium of instruction became a target of protest. This process began in Stellenbosch, with the creation of a predominantly black student movement called Open Stellenbosch. The Open Stellenbosch Collective argued that black students at Stellenbosch felt both culturally isolated and academically disadvantaged. Within a year the mainly parallel medium language policies at other historically Afrikaans universities became the subject of similar protests.

During 2016 – the second year of the protests – all of the affected historically Afrikaans universities began to revise their language policies and this process was contested by Afrikaans interest groups. The ensuing litigation involved four universities: Unisa; the University of Pretoria; the University of the Free State (UFS); and Stellenbosch University. The first three institutions involved similar processes: all opted to end the parallel medium infrastructures that had hitherto sustained Afrikaans-medium instruction.

In the UFS case, the Constitutional Court echoed the university’s justification of the decision, arguing that parallel medium instruction has had the undesirable consequence of fostering not only “racially segregated lecture rooms but also racial tensions”. In contrast, at Stellenbosch the debate has focused on the shift away from the so-called “equal status” of English and Afrikaans as undergraduate mediums of instruction.

The new Stellenbosch policy, adopted in June 2016, retains a formal commitment to Afrikaans – through the use of simultaneous interpreting in lectures and limited parallel medium teaching – but prioritises English in a section that stipulates that in “each lecture, all information is conveyed at least in English and summaries or emphasis on content are also given in Afrikaans”. While the university tried to argue that the 2016 policy “merely reconfigures” the Afrikaans offering, the Constitutional Court judgment argues that “this is not so”, as Afrikaans tuition is subject to “demand and available resources”.

The Constitutional Court claims that the issues raised by Gelyke Kanse were “more complex” than those raised in the Free State case, but the consensus judgment nevertheless notes the “hard racial edge” to the evidence produced by Stellenbosch University. In particular, the court notes that “most black (in contradistinction to brown) new entrants to the university are not conversant enough to be able to receive tuition in Afrikaans. Second, seen as a bloc, the new entrants for whom Afrikaans is an obstruction are not brown or white, but overwhelmingly black”.

The judgment also echoes the university’s concerns about parallel medium instruction and the use of simultaneous interpreting in lectures – which were core components of the 2014 policy. While “fully parallel medium tuition” would entail a 20% increase in student fees, a continuation of pre-2017 dual-medium practices have increasingly less subtle cultural costs. In particular, the court argues that dual-medium classes “with interpreting from Afrikaans to English peripheralise and stigmatise black students not conversant in Afrikaans”.

Arguably the central theme that emerges from these two cases – which I develop in the second article – is the complexity of “costs” associated with the development of languages in the South African higher education system. And how should the division of responsibility for language management be structured? The Constitutional Court acknowledges that its judgments could signal “the end of Afrikaans as a language of tertiary instruction”, but goes on to assert that this is “not the university’s burden’.

A new legal twist (and twis, or heated interpersonal conflict) has emerged, following a decision to appoint the author of the recent consensus judgment – Justice Edwin Cameron – as Stellenbosch University’s incoming chancellor. Accusations of interference with the constitutional proceedings have been levelled at the vice-chancellor, Professor Wim de Villiers, and – reacting to a formal complaint by DA MP Leon Schreiber – the university has appointed a retired judge to lead an independent investigation. This matter was aired rather dramatically in the Adam Small Theatre on 14 November, during the annual meeting of Convocation. In his address, the vice-chancellor mentioned the investigation, but refused to comment further.

The President of Convocation – Jan Heunis SC, who was also the leader of the Gelyke Kanse legal team during the Constitutional Court case – did not hold back. He used his presidential address to berate De Villiers for his alleged “highly irregular” conduct, criticised the conduct of Justice Cameron and argued that the Constitutional Court’s judgment was “irredeemably tainted”.

Heunis did not, however, have an easy job presenting his argument. A rather sanitised report on the event in Die Burger notes that “a group of about five people at the back of the auditorium shouted Heunis down and called him a coward, among other things, for delivering portions of his speech in Afrikaans”. What it does not report is that these interjections came from black members, and there were a lot more than five.

What I experienced was palpable tension between the predominantly white and older members of Convocation sitting at the front and the considerable number of black staff and students sitting towards the back of the theatre. When Heunis announced that he would resign – if the vice-chancellor and the Chair of Council refused to resign, or if Judge Edwin Cameron is inaugurated as the next US chancellor – the “loud applause” came from the back of the auditorium.

I refer to this incident because it serves as a graphical prelude to my discussion of the “costs” involved in the university language debate. The issue of “costs” looms large in the recent Constitutional Court documents and has also featured prominently in the subsequent reactions to the consensus judgment. Living in Stellenbosch, I am sensitive to the emotions that accompany the decline of Afrikaans as a high-level cultural medium. This constitutes an obvious cultural “cost” for those who were previously able to use their “mother tongue” at this level. But high-level English, Afrikaans and English-Afrikaans bilingualism are cultural capital, or the correlates of relative privilege.

Recent critics of the Constitutional Court judgments have tended to downplay the socioeconomic costs of language development, redirecting attention to cultural costs framed in terms of rarefied notions of linguistic diversity. The monetary costs associated with what the Constitutional Court calls “parallelism” are discounted and one commentator calls on the Stellenbosch economics department to provide a “proper scientific study” of the University’s evidence.

I do not, however, believe that the Constitutional Court’s “costs” argument reduces to some form of superficial cost-benefit analysis. The two Constitutional Court judgments discussed above fit a pattern that deserves a more systemic explanation: the post-1994 rise and decline of bilingual language planning initiatives at historically Afrikaans universities. DM

Part 2 will show how these two judgments cap a longer-running trend at historically Afrikaans universities.

Dr Lloyd Hill is a lecturer in the Department of Sociology and Social Anthropology at Stellenbosch University.