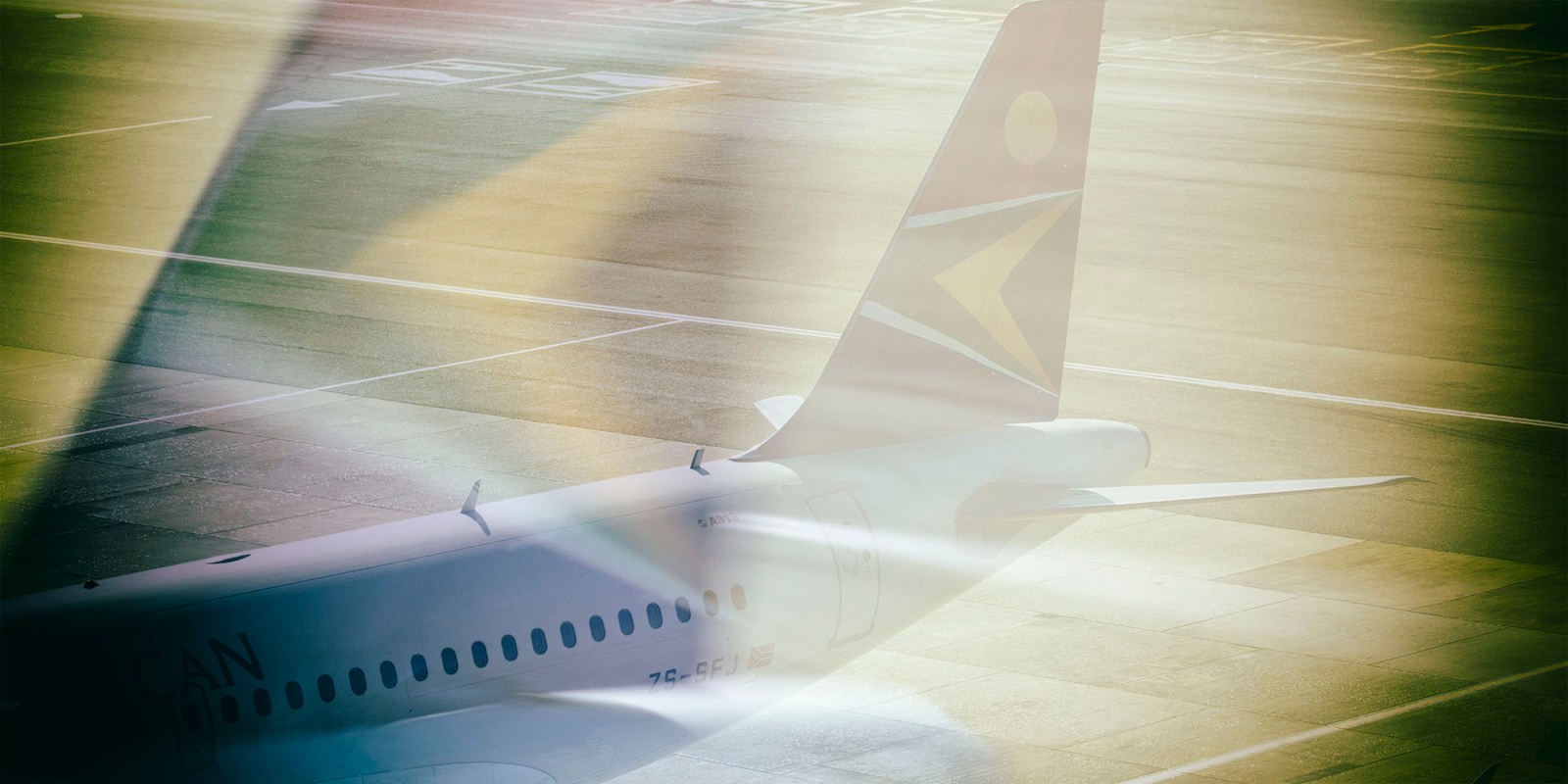 It is the government’s duty to stare down Numsa at South African Airways if it stands any chance of tackling the massively costly inefficiency that is Eskom. Cyril Ramaphosa and Pravin Gordhan must reassert their authority to govern, and win back the right to make decisions in the best interests of the whole economy, not just a conflicted and parasitic union elite. Anybody who wishes to govern this country must have iron in his spine and not be swayed by threats and strikes.

The ongoing strike against the restructuring of the state-owned South African Airways (SAA) is a proxy battle to curb the government’s strength of will in its ongoing attempts to set the country’s economy back on course. The trade unions embarking on the industrial action against SAA have set their eyes on a much bigger prize beyond the airline: to reverse the reforms Cyril Ramaphosa’s government has embarked on.

Any sign of weakness on the part of the government will be milked to the last drop, and the outcome of this confrontation between the reformers in the government and the trade unions led by the National Union of Metalworkers of South Africa (Numsa) will determine whether South Africa emerges a healthier and more agile and inclusive economy, or whether we continue on the well-beaten path to a failed state.

Numsa and its allies in the South African Federation of Trade Unions want to reverse the reforms in all the companies owned by the government to restructure them efficiently to deliver the services for which they are mandated. The battle to stop the proposed retrenchments of 944 employees at the airline company is only the first skirmish and a proxy to stop the same happening at Eskom, at Denel, at PetroSA and at the SABC. All bankrupt entities with no future in their current paths.

SAA is an overstaffed, inefficient and ancient dinosaur that, except for a steady stream of taxpayer funds, has been bankrupt for the past 25 years.

It has been a drain on the coffers of national treasury since its founding in 1934. In the beginning, as part of the department of transport, its mission was strategic: to fly South African government officials between Johannesburg and the imperial capital of London.

Businessmen flying between the two cities became the first commercial passengers of the new airline company, which carried on as a monopoly until the liberalisation of the market during the democratic era to introduce other airline operators. This liberalisation of the aviation market introduced competition, which forced the government to operate SAA as a commercial entity, rather than the extension of a staid government department.

The whole economy benefitted from the competition, with the airline industry becoming more efficient, cheaper and accessible to the general public.

In this new mission, and in the face of the new competition, SAA has never succeeded. During the last 25 years of democracy alone, the government has repeatedly gifted the airline funds that could have been employed more profitably in more pressing government activities, such as building schools and clinics and funding the university education of poor students.

Instead, the audited annual reports of SAA and national treasury documents show that more than R57 billion has been wasted bailing out a perennially loss-making entity, thus giving its management and workforce no incentive to run as a successful commercial entity. That is R57,000,000,000, including the latest R5.5 billion bailout passed by parliament after the 2019 medium term budget statement.

This has been nothing but a huge waste of desperately needed resources.

This sorry state of affairs is not limited to the democratic era. The first sixty years of SAA’s existence were also marked by corruption, incompetence and the pure arrogance of a government department devoid of any commercial incentive to survive.

The only beneficiaries of this wastage are the trade unions who make money by organising workers at SAA, and their corrupt allies in the ANC and government. Trade unions such as Numsa, the South African Transport and Allied Workers’ Union (Satawu), the National Transport Movement and the South African Cabin Crew Association are the ones who make money from the people employed at SAA.

These unions charge their members a fixed monthly fee, in other cases this expressed as a percentage of the employee’s salary, for the privilege of representing them in bargaining talks with the employer. Thus they can be expected to fight tooth and nail to keep this income stream, as they are currently doing.

“Over the past 13 years, South African Airways (SAA) has incurred over R28 billion in cumulative losses,” said national treasury in the 2019 medium-term budget policy statement on 30 October. That is R28,000,000,000. “The airline is insolvent and, in its current configuration, unlikely to ever generate sufficient cash flow to sustain its operations,” said treasury.

So what does South Africa now have to show for all this expenditure?

The group, which includes the technical maintenance arm SAA Technical, domestic airline operator Mango, and catering company AirChefs, employed 10,071 people in the year ended March 2017. SAA has not been able to publish its audited financial statements for the two years ending March 2018 and this year as it is not a going concern until it receives another cash bailout of more than R13 billion.

After the cumulative cash bailouts of R57 billion mentioned above, SAA still has an outstanding debt of R9.2 billion. “Government will repay this debt over the next three years to honour its contractual obligation. Operational changes at SAA are required urgently,” said treasury in the October medium-term budget policy statement.

This statement by national treasury is a watered-down version of the finance minister’s accurate view that SAA does not deserve a cent more in government funding. Tito Mboweni has made it clear that were economic policy dependent on him personally, he would have closed SAA down the moment he assumed that position.

Compounding its status as an uncompetitive and lethargic operator, SAA has been a victim of a sustained campaign of looting, both by the government officials who play the role of shareholder, and the executives charged with advancing the operator’s best interests. The past ten years, under the board chairmanship of Dudu Myeni, have seen the worst rampant theft of public resources at SAA.

With the exception of the SAA Pilots Association, the trade unions whose members stood to lose the most in the event of the airline going under stood by and did nothing to stop the rampant theft disguised as BEE and transformation. Those executives who did not tow Myeni’s line found themselves hounded out of their jobs. And the revolving executive door at Airways Park has been swinging the fastest!

In the past 25 years of taxpayers’ money going only one way: to fund the corruption of the ANC cadres deployed to SAA, the taxpayer has not seen any return on the investment. Because income tax to the government and dividends to the shareholder can only be paid from profits, SAA has paid neither in the past 25 years. In another quarter-century from now, SAA will still not be able to sustain itself. “In its current configuration, SAA is unlikely to generate sufficient cash flow to sustain operations,” said national treasury in October.

Half of SAA’s employees operate its fleet of 54 aircraft, the company’s main source of revenue, while the other half is divided between Mango, AirChefs and SAA Technical.

It is the first half of the business that is the subject of the current management action, with a targeted retrenchment of 944 employees out of the 5,752 that work in the airline unit.

This attempt at fixing what is wrong with SAA should be welcomed by all patriotic people who want to see a growing economy and a government that prioritises growth and competitiveness.

For the whole 85 years of SAA’s existence, it has failed dismally to make itself a self-sustainable commercial entity. Anyone who believes it can still work as a business, under government control, needs to have their head examined.

To expect Numsa, and the other trade unions to see the logic in fixing a broken entity, and to expect them to accept the short term pain of the necessary retrenchments, would be akin to expecting a turkey to vote for Christmas. Unions only exist to extract membership fees from the employed people who are gullible enough to believe they will be getting any benefit from their membership.

As such, it is not in their short term interest to allow the economy to be fixed by cutting unnecessary expenditure, even if that will result in a growing economy that employs more people and union members in the long term.

But it is the government’s duty to stare down Numsa at SAA if it will stand any chance of tacking the costly inefficiency that is Eskom. Anybody who wishes to govern this country must have iron in his spine and not be swayed by threats and strikes.