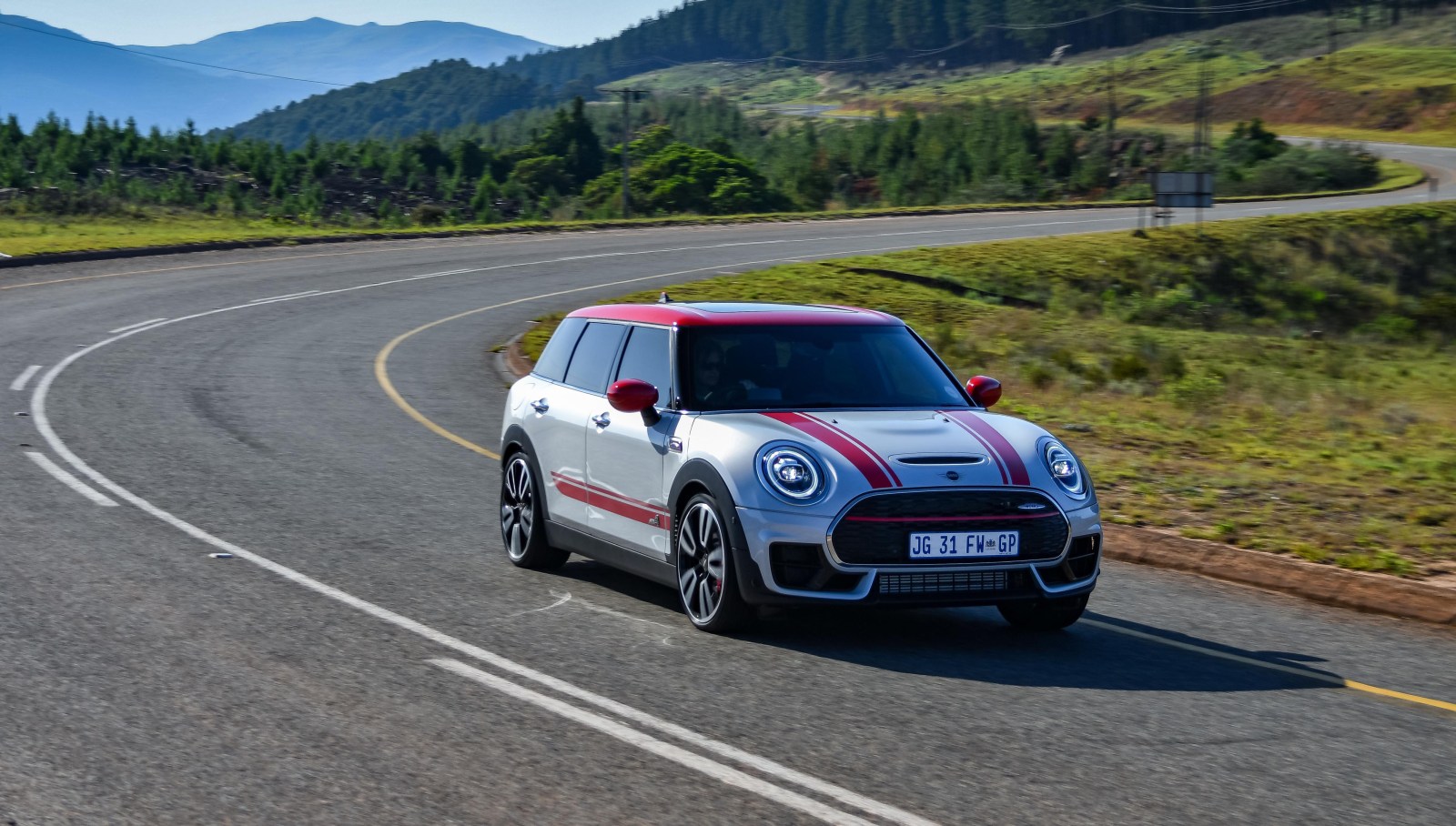 Fasten your seatbelts. The most powerful two Minis in the brand’s 60-year history have just been unleashed in SA — the Countryman John Cooper Works and Clubman JCW.

The last time I drove on a launch with Windgat I told him it would be the last. It was a year ago in a 280kW AMG Merc coupé when he took a precarious bend at 160km/h on the Helshoogte Pass near Franschhoek. I saw my life flash by as I imagined a Thelma and Louise ending.

“Take me back to the hotel you f#@#ng BadAsshole!” I screeched. A year earlier he’d almost killed me hurling an Etios around the Aldo Scribante Track, pushing a 59kW granny car to unspeakable speeds.

“I will never ever drive with you again,” I spluttered as I all but projectile vomited my five-star launch breakfast into the pits.

Last week I arrived at CT International, fired up to travel to Joburg, then on to Mpumalanga for the national launch of the new Mini Clubman and Countryman John Cooper Works. JCW is the potent sports arm of Mini, on par with the Merc AMG, the Golf R, the BMW M Sport. I was excited. I’d done my research. I was off to test drive the most powerful models to date in the British manufacturer’s 60-year history.

Both the JCW Countryman and JCW Clubman have been fitted with 225kW four-cylinder turbo engines — that’s 50kW more than the previous generation. The torque’s been upped by a 100Nm to give these speed-queens a crazy 450Nm of pulling power. Both share a new eight-speed Steptronic sports transmission and an ALL4 all-wheel drive system. There’s an updated chassis and a new exhaust system which adds to the overall race feel and sound of these premium compacts. 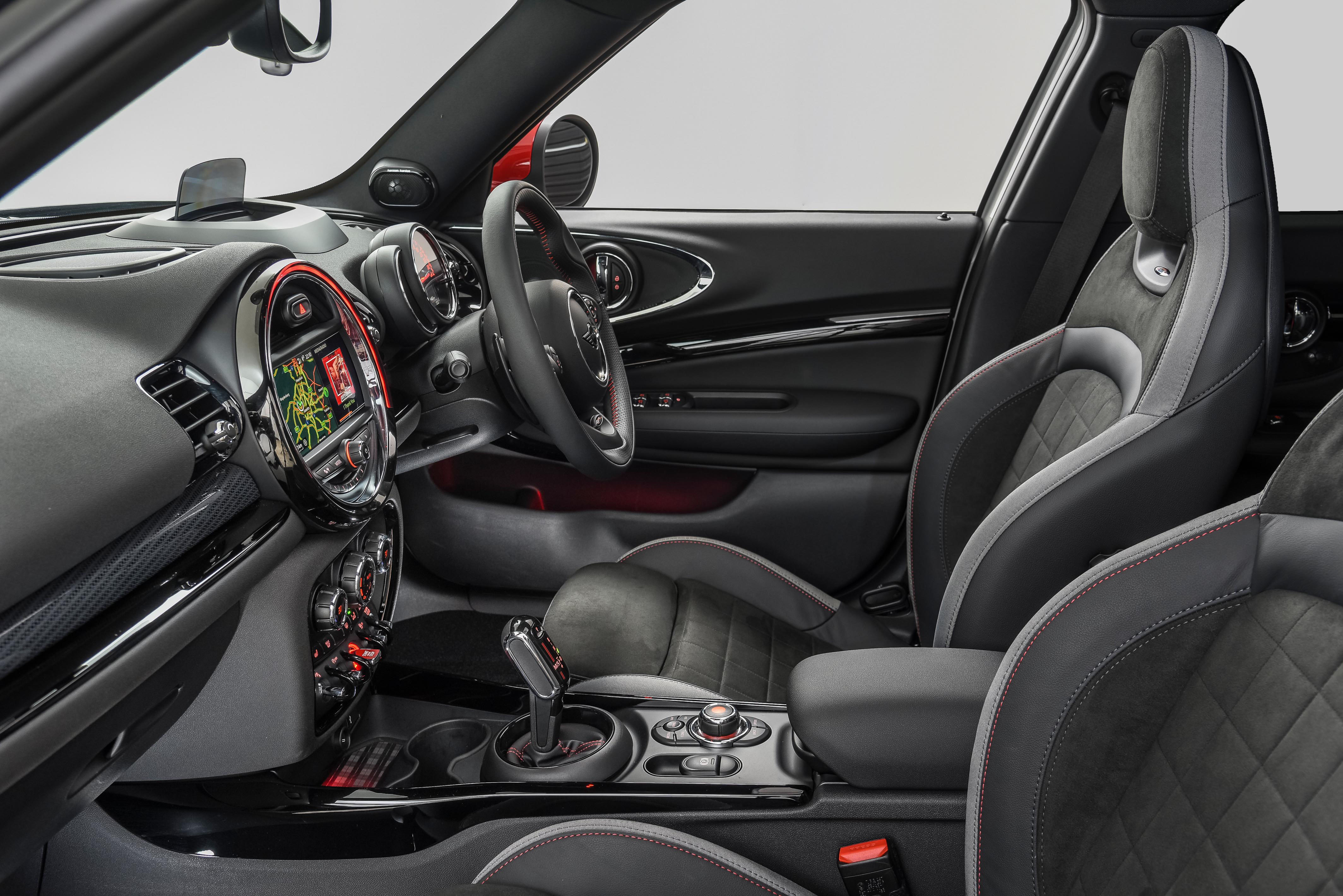 The six-door Clubman is long — all 4.3 meters of it — and has 1,250l of boot space with the rear seats down. Its newly designed grille is made all the prettier by revised LED Matrix headlights, and for Brexit fans, there’s an option of Union Jack tail-lights. The new sport suspension is a juicy proposition, lowering the vehicle by 10mm, accompanied by an adaptive damping system. I was revving to go.

I looked around the departure hall, surrounded by strangers. Not a car journo in sight.

One of the things we do as motoring scribes, is to choose our drive partners carefully. On launches you can spend an entire day — sometimes two — test driving a car — often travelling distances of 400-500km. You don’t want to be stuck with a lunatic or even worse, a beige bore. I’d skimmed the launch list earlier. I was the sole female on the rotation.

Then I saw him — Windgat — sitting all alone at the boarding gate. He looked so lost and vulnerable. My heart melted. He’s actually a really sweet guy. Something just happens to him when he grabs a steering wheel.

I’m under no illusion that my 2014 Ferrari incident precedes me. Five years later it can still mar me like an adolescent girl with acne. Worried that I’d be left like a pimply wallflower at one of those teenage discos, I decided to shift my standards. I sidled up to him.

“Do you want to drive with me?”

Our fate was sealed.

Fast forward to the following day. It’s 35ºC in the shade. We’re on the open road just outside Kruger in the new 225kW JCW 2.0-litre turbocharged Countryman. 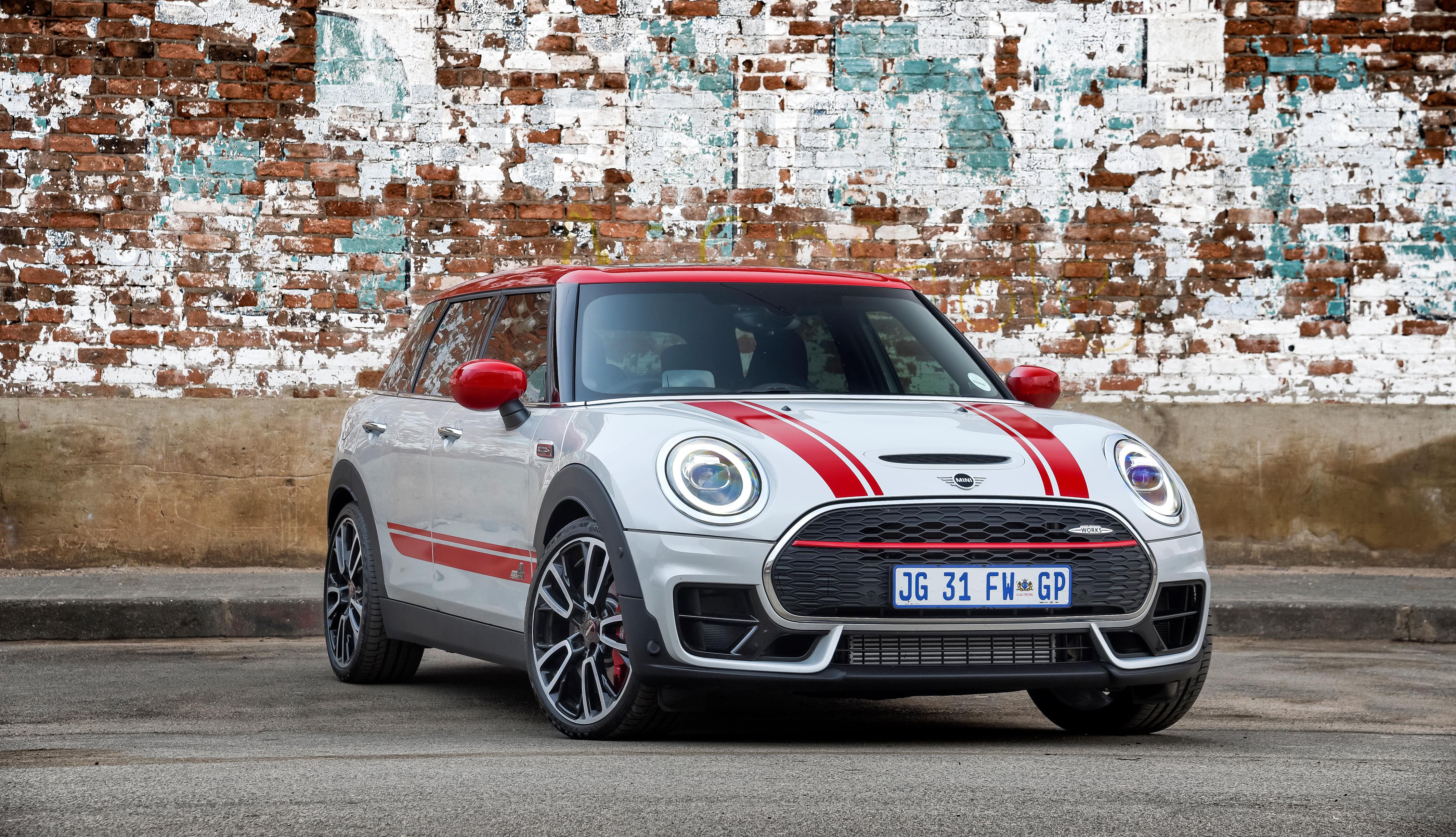 Windgat is behind the wheel. “I know this car is fast but let’s come out of this one alive,” I mutter.

I clutch my seatbelt as he revs to top speed — 0-100km/h in just over five seconds — and we’re away.

Like all the PR hype, the Countryman is a speed freak’s dream car, with the same two-litre turbopetrol engine found in parent company BMW’s X2 M35i and M135i models. Acceleration time has improved by 1.4 seconds from the previous generation. Fuel consumption is claimed at 7.9l/100 km.

Soon we’re on the infamous Long Tom Pass. Windgat is in his element, weaving past snail-slow moving trucks, overtaking any vehicle that happens to obstruct his need for speed. He revs and swoops through hairpin bends. “The suspension’s really good,” I stutter. “The roadholding is magnificent,” I squeak.

I’ve done my homework and now I’m experiencing full tilt, albeit from the passenger seat, just how good Mini’s Twin Turbo and speed-orientated tech really is. With power going seamlessly to all four wheels, both the Countryman and Clubman have been kitted out with a bespoke engineered chassis.

Using JCW’s race intel, the duo now have reinforced crankshafts, a main bearing with an extended cross-section, specific pistons, connecting rods, and a new vibration damper with optimised cooling for the speed-hungry.

I try to take my mind off the idea of a head-on collision as Windgat paddle shifts through bends in Sports Mode. I focus on the interior. I’m breathing quick.

Inspired by the Minis from the 60s and 70s, when Mini, under the helm of BMW, relaunched in the early 2000s certain retro design elements like the ignition switch and the round central display dial were retained. But over the past decade everything has grown decidedly bigger and flashier. And perhaps this is where Mini has lost some of its original fan base. 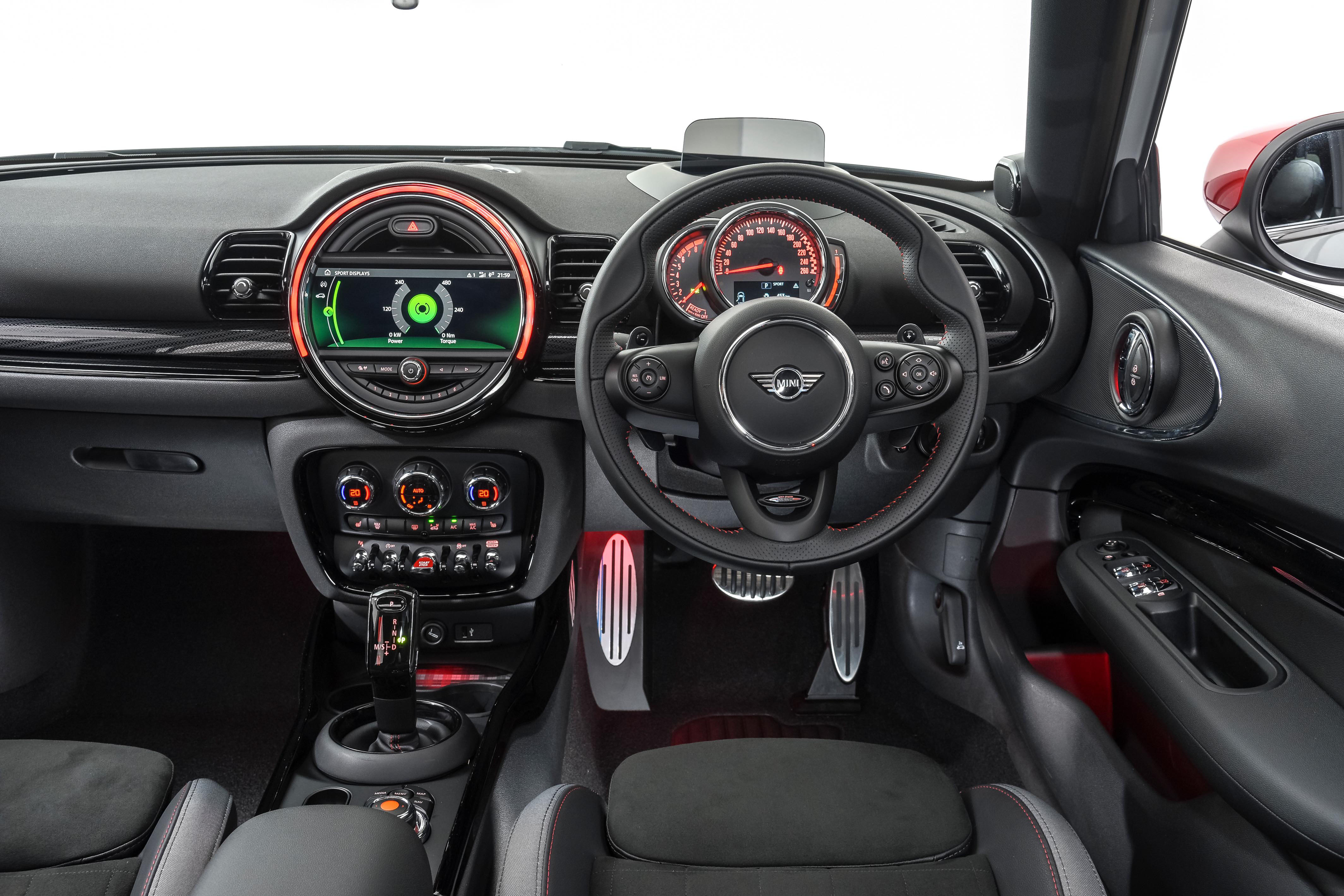 Inside, the new Countryman looks a lot like a funky disco with a selection of changeable light-surround options, casting splashes of colour throughout the interior. Our setting is on neon pink. A conglomeration of knobs and switches add to the hi-tech cockpit feel with a huge round 6.5 inch touchscreen dominating the dash. It’s future-savvy with numerous MINI Connected Online services like Real Time Traffic providing real-time data on traffic situations. There’s even access to a personal concierge service. I debate whether I should dial the call centre — probably based somewhere in Spain or India — for directions to the nearest speed-sick pill shop.

In the past few years the Mini product has clearly changed to suit our “bigger is better” world. With its original DNA dating back to the Suez Oil Crisis of 1957, during which time astronomical gas prices inspired the Morris company to explore the idea of smaller, more fuel-efficient cars, it was launched as the ultimate small, affordable car. Now the once minuscule Mini has ballooned in drive tech, size and price. Looking at the latest Clubman and Countryman in all their snazzy splendour, diehard fans must be asking: “Are these still Minis?”

It’s believed the main reasons for the downward trend are styling, price and the divergence from the brand’s roots. According to Michelle Krebs, an analyst at US-based Autotrader:

“The small-car market is shrinking and people that are buying small cars are people with constrained budgets. Mini is facing formidable challenges.”

We pull over for a driver change. Now it’s my turn to take the Countryman’s racy leather steering wheel, replete with a host of handy multi-function buttons. I settle into my leather JCW driver’s sports seat and lean back against my integrated headrest. It’s close to 40ºC outside. I ignore the heated seats option and turn up the dual aircon. I switch from Sports Mode to Eco. I’m going to show Windgat what a leisurely cruise feels like. But soon I’m revving and weaving, the speedometer surges. Gulp. The speed is contagious. Oh my god, keep me away from Launch Control.