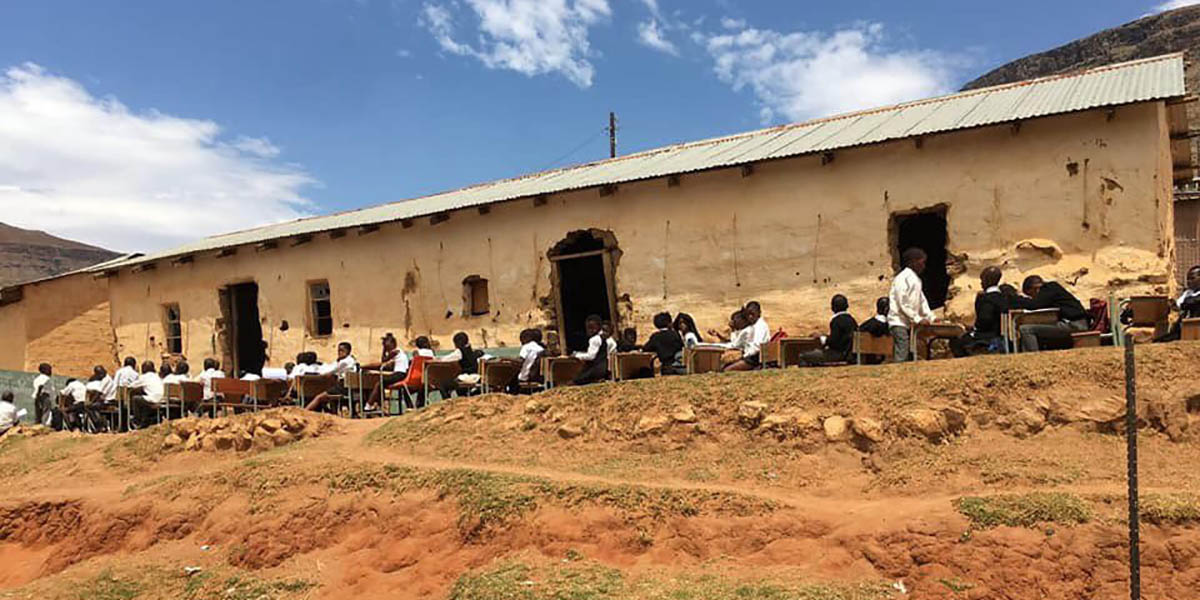 The Eastern Cape Department of Education this week apologised to learners at a primary school that was meant to be rebuilt in 2017, after pictures went viral of them writing their exams outside dilapidated mud classrooms. The department was also hit with a court order compelling it to fix another school’s toilets – something it had failed to do so since 2013.

“Delivery of schools’ infrastructure in the Eastern Cape is a complex undertaking with many different role-players involved. In terms of the Provincial Infrastructure Delivery Framework, the Department of Education uses implementing agents and only implements a limited number of maintenance projects itself,” department spokesperson Malibongwe Mtima said.

According to the department, the construction of a new school building for children from Mhlontlo, Ntywenka Village near Tsolo had to be abandoned due to “geological challenges” and the delivery of prefabricated classrooms and bathrooms for use in the interim never happened.

He said the construction of the new Mcheni Junior Secondary School, valued at more than R20-million, began in 2017.

“The school was 60% completed when it had to be stopped due to structural defects mainly caused by geological challenges,” he said.

He said by then 52% of the budget had been spent and the project was terminated as they tried to find a solution.

Mtima said prefabricated classrooms and bathrooms were supposed to have been set up and they were looking into this.

“The department wishes to apologise to the educators and learners at Mcheni Junior Secondary School; and the parents and the community as a whole for this matter and hope to resolve the situation to the satisfaction of the school before the start of the 2020 academic year.

“The school and the SGB, with the support of the district office, are currently looking at finding an alternative venue so that learners can finish writing their exams, protected from the elements.”

In a second case, the department faced legal action in the Eastern Cape High Court sitting in Makhanda over fire-damaged toilets at Nombulelo Senior Secondary School. Despite extensive efforts of successive principals, the Department of Education’s district office, the Office of the Premier and the Portfolio Committee on Education, the toilets have not been fixed for six years.

This has left the nearly 500 boys at the school with no choice but to relieve themselves under the school stairwell. According to papers before court, parents also feared for the safety of their children as tiles and guttering regularly blew off the damaged roof.

Mtima said they had received an application for a court order by the school’s governing body but decided to agree to repair the structure within six months.

“We are redirecting a contractor who was allocated work to do repairs at a school which has subsequently closed down, to fix the bathroom.”

He said they hoped to have it done when the school reopens in 2020.

Marc Jacobs, a researcher at Equal Education, said the department only released its 2018 Norms Progress Report in June 2019.

“In addition, the report was of extremely poor quality: it contained duplicate information from old reports, inaccurate and conflicting data and lacked crucial information such as costed maintenance plans. In a meeting with Equal Education where we pointed out these shortcomings to the department, [the department’s superintendent-general] Themba Kojana agreed with our critiques and committed to reworking the report by August 2019. Unfortunately, they have not delivered on that commitment yet.

“On October 17, we marched to the offices of the department to hand over a memorandum of demands to both Kojana and the Eastern Cape Education MEC, Fundile Gade. Among our demands were that they must deliver on its commitment to provide a proper and accurate progress report.

“The deadline for the 2019 progress report – 29 November 2019 – is around the corner. We will advocate to see it timeously released to the public, in accordance with the law,” Jacobs said. MC