Democracy as a transitional compass: Women’s participation in South Africa and Kerala, India 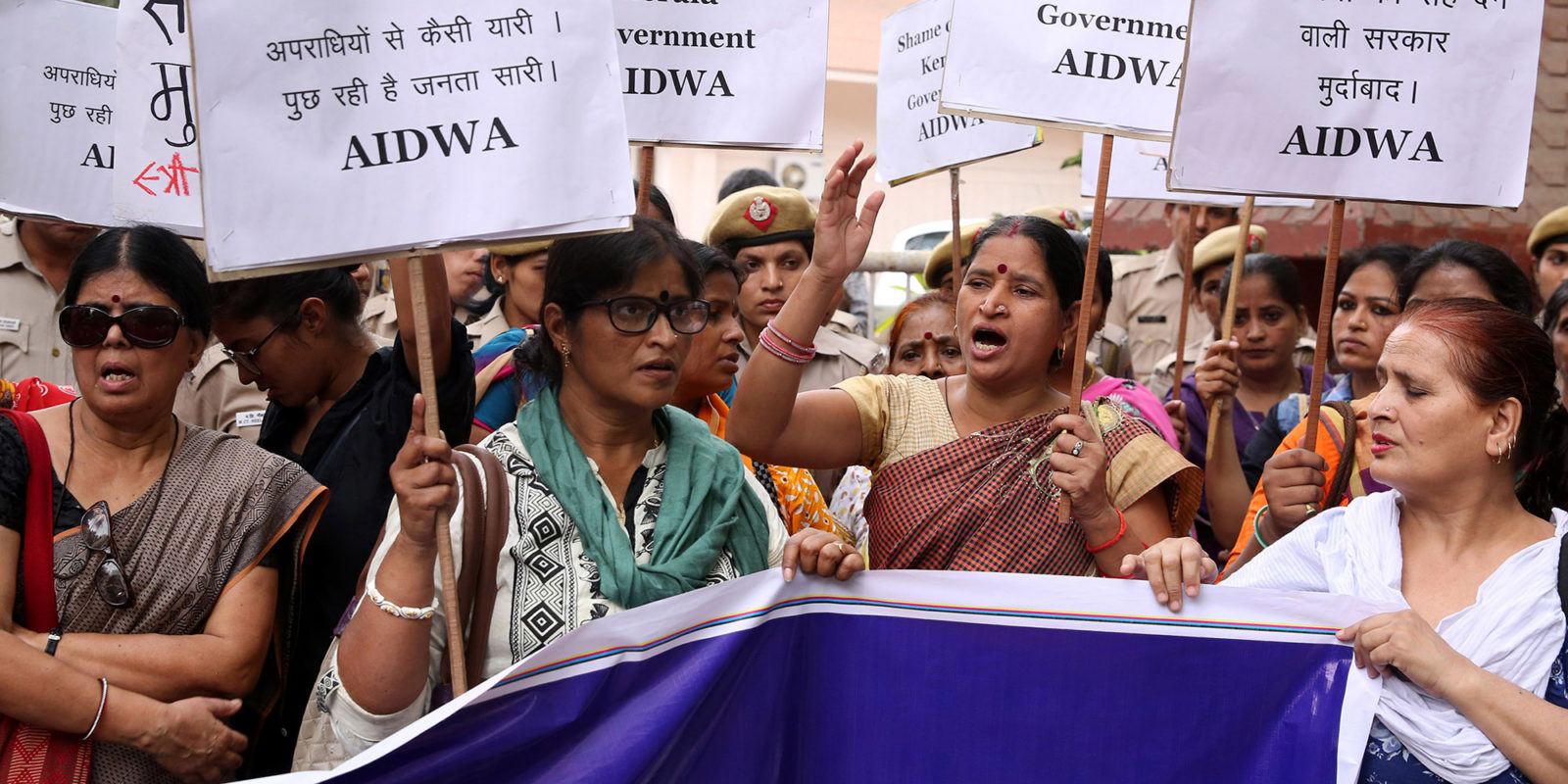 Members of the All India Democratic Women's Association participate in a protest in New Delhi, India. (Photo: EPA / Rajat Gupta)

Democracy, including participatory democracy, is a crucial part of any emancipatory future that seeks to challenge and overcome inequality. Democracy is necessary both as a means to get there but also as an end in itself. Genuine democracy holds much potential in creating more egalitarian and just economic, political and social systems by empowering people’s voices to rise above powerful economic and political elites.

While more and better democracy might be a desired good, today much is working against it. Scholars such as Dörre (2018), Brown (2015) and Wolin (2010), are among those who talk of the demise of democracy in the face of neoliberal capitalist expansion, in which states have abandoned their social welfare role in favour of disciplining populations and ensuring robust profits for capitalism.

It is in this context that South Africa and Kerala, a state in the southwest of India, stand out, as both societies have attempted to implement robust democracies that respond to the social needs of their populaces in the face of rising market democracies. Kerala has a long history of robust civil society organizing making redistributive claims on the state. Since the 1960s the Communist Party of India (Marxist) (CPI(M)) has helped create some of the most important developmental achievements in the Global South in terms of human development (e.g. life expectancy, infant mortality, literacy rates). The politics in the state are also characterized by the highly contested electoral system with neither of the two major parties (CPI(M) and the Congress Party) winning two consecutive elections. Over time, however, South African state’s commitment to participatory forms of democracy has withered as it increasingly centralises its power.

In Kerala, people-led development has a unique itinerary. In the 1990s, the People’s Plan Campaign for Democratic Decentralization of the CPI(M) institutionalised democratic procedures and deliberative processes in order to ensure that the developmental needs of marginalised classes were addressed through local government action.

Women played a central role in this.

The state created spaces for women’s participation in local governance through the ambitious network of women-only neighbourhood groups involved in poverty alleviation.

The idea behind the women’s neighbourhood groups was invited spaces that turn women from passive recipients of social services and government programs to active participants in economic activities (both with public goods and individual economic advancement) and local development. The neighbourhood groups were a crucial institutional innovation that increased women’s participation in local development planning and were also designed to foster economic activity in the form of savings and loans and micro-enterprise production. The programme linked women’s agency to invited spaces of local government planning, making it, at least in theory, possible for women to help transform relations of power in society.

Unfortunately, we see a very different dynamic in the South African context.

In the early years of democracy, the state focused a great deal of attention on constructing new legislation, institutions, and practices that allowed for people’s participation in governing. These invited spaces gave ordinary citizens avenues for direct participation and provided a context in which women could articulate experiences of racism, sexism, colonialism, exploitation and structural and personal violence in order to develop collective solidarities. The ANC promised structural transformation through invited spaces of local governance and local economic development. The effective agency built around identities of race, class, and gender translated into a transformative agency in the invited spaces of building the nation.

Over time, however, the ANC collapsed itself with the ‘nation’, giving little attention to uniting communities to build economic and social justice based on egalitarian ideals. The once-powerful calls to gender equality slid into elite spaces of negotiation and representation. The women who went through a process of individual empowerment continued to find themselves on the margins of society, struggling to eke out an existence in the face of continued patriarchal norms, political demobilization, widespread poverty, and few economic opportunities.

The women in this study show that the hopeful moment of the 1990s, with promises of overcoming the dominant forms of oppression and exploitation, turned into neoliberal times of economic and political retreat, state capture, corruption of local politics, and the failure of state social services.

The state shifted its approach to citizen participation so that the state increasingly determined development on behalf of the people (rather than in collaboration with people). Instead of participatory development, the state now spoke of quantitative delivery targets in which citizens were to be governed through various disciplinary state mechanisms (such as cost recovery, indigent management, and prepaid water and electricity meters). Citizens became beneficiaries of programmes and clients of paid services rather than active partners in development.

Thus, the early years of post-apartheid nation-building created invited spaces of participation with the possibility for a transformative agency. By the early 2000s, however, these spaces of participation had withered and the state increasingly shifted to service delivery, in which it provided services to consumer-citizens. This shift ultimately extended the role and control of the state. MC

Michelle Williams is Professor of Sociology at the University of the Witwatersrand (Wits), Johannesburg, South Africa and is chairperson of the Global Labour University Programme (GLU) at Wits (2010 to present). She has published widely on democracy, development, gender and South-South comparisons.