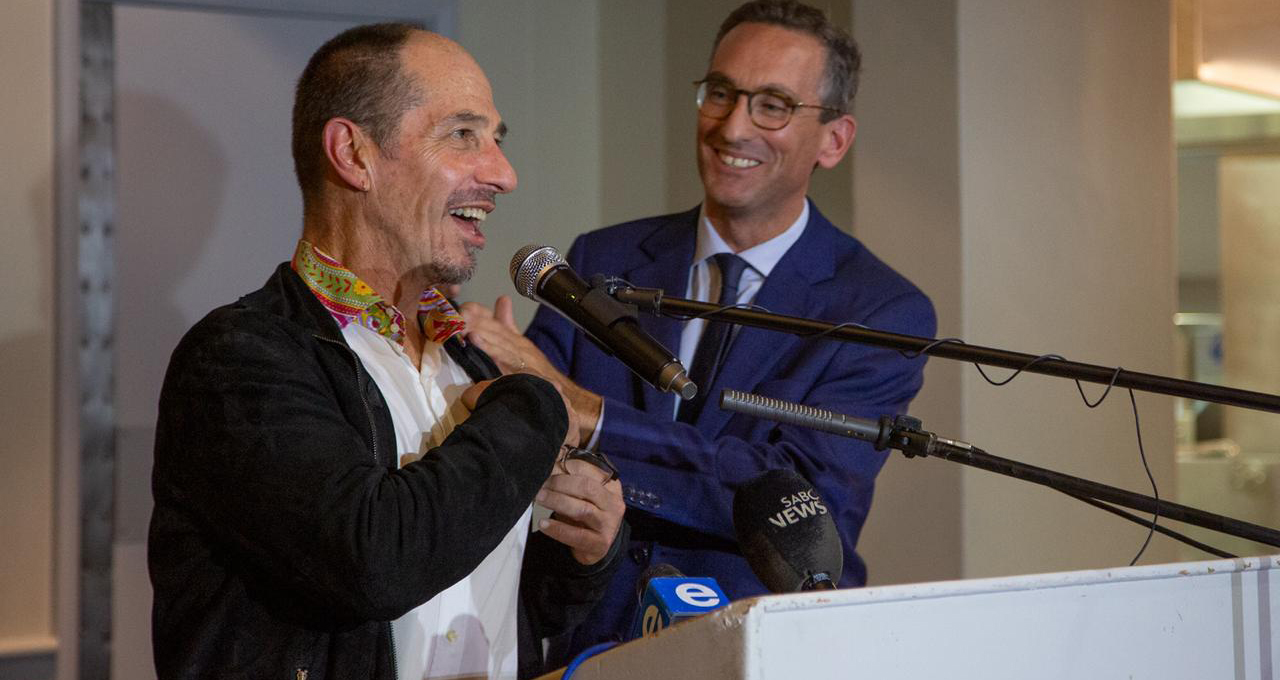 On a perfect Cape Town night, on behalf of French President Emmanuel Macron, French Ambassador Aurélien Lechevallier bestowed the award of Chevalier des Arts et des Lettres (Knight in the Order of Arts and Letters) on a one-of-a-kind cartoonist: Zapiro.

“What is the shape of truth?” French Ambassador Aurélien Lechevallier asked.

The green-striped medal wouldn’t pin into the thick leather of Zapiro’s jacket, but it didn’t matter: the Order had been bestowed upon Zapiro, and the cartoonist, now a Knight in the Order of Arts and Letters, following in the steps of Johnny Clegg (1991), William Kentridge (2013), Gregory Maqoma (2017) and Zanele Muholi (2017), was visibly moved.

It wasn’t just the decoration – established in 1957, the Order of Arts and Letters is awarded by the French ministry of culture “in recognition of significant contributions to the enrichment of the arts and literature in France and abroad”; nor was it just about the ceremony, the tradition of speeches (both brilliant tonight) and a joie de vivre palpable in the Champagne glasses lifted and santé! said a little louder than usual. 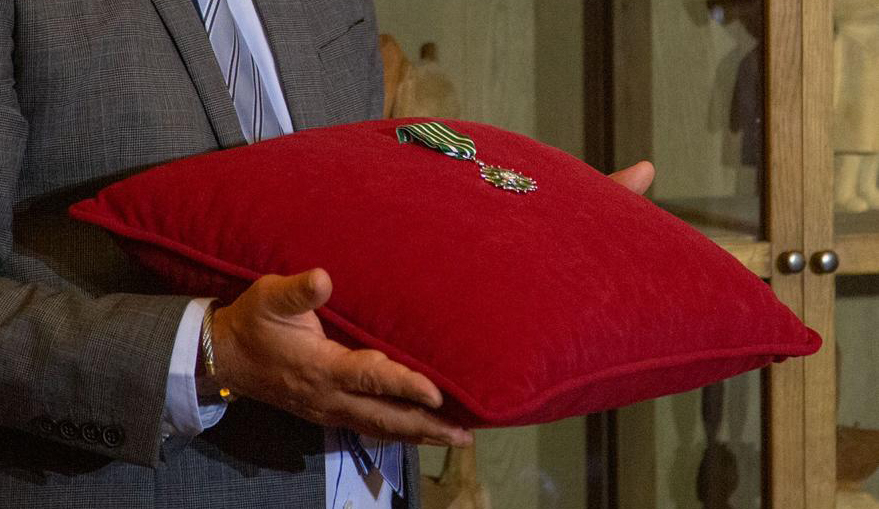 The emotion was palpable in the air, partly because of the memory of the Charlie Hebdo cartoonists who lost their lives during the January 2015 attacks and whom Zapiro paid homage to; partly because of the threats to his life he personally often faces, a glaring reminder that true freedom of speech remains a distant dream even in 2019. This was a celebration of cultural and artistic excellence, as well as a nod to the complex, demanding and at times dangerous work done by satirical cartoonists, and the “fire” of laughter – or anger – they spark with their ink.

“They play with fire. And when I say fire – I refer to all its meanings. One mistake and a bonfire is lit. One step across the border and the dragon of censorship is awake. One step back, you burn the idea. One step aside, and the anger of the mob bites you. Three steps away from the politically correct and you may unleash the fury of the government and the faithful servants of the moral laws. If you are too harsh, you create pain. Too blunt, you cause suffering. Too clear, you are not funny anymore. Too ambiguous, too vague, you miss the point.

“Cartoonists are like an archer, an arrow that can never miss the very centre, the dark spot of the target, a long distance away. Every day, they walk on the tightrope. But when they walk, like Zapiro, on the ground, they really play with a good type of fire. The kind of fire that ignites laughter when you would think you are no longer able to laugh. The kind of fire that heals the pain, that lifts the suffering. It is the light of a sun that shows the true face of the beauty or, on the other hand, the ugliness of a human soul. A fire that spreads to the mind and sparks a series of thoughts and new ideas. A fire that we can share with friends, with colleagues, with strangers in the street. A fire that is at the heart of Art, at the essence of what we call literature or Letters in French”, said Ambassador Lechevallier.

Just one level below the Legion of Honour, the Order of Arts and Letters is a symbol of cultural and artistic brilliance; it was awarded to Susan Sontag, Patti Smith and Steven Spielberg, to name but only a few. Zapiro was bestowed the order because he shares “the values that define and guide [the French] Republic: the trilogy, equality, liberty and fraternity, resonate perfectly with who you are, what you believe in and what you stand for”, explained Lechevallier. 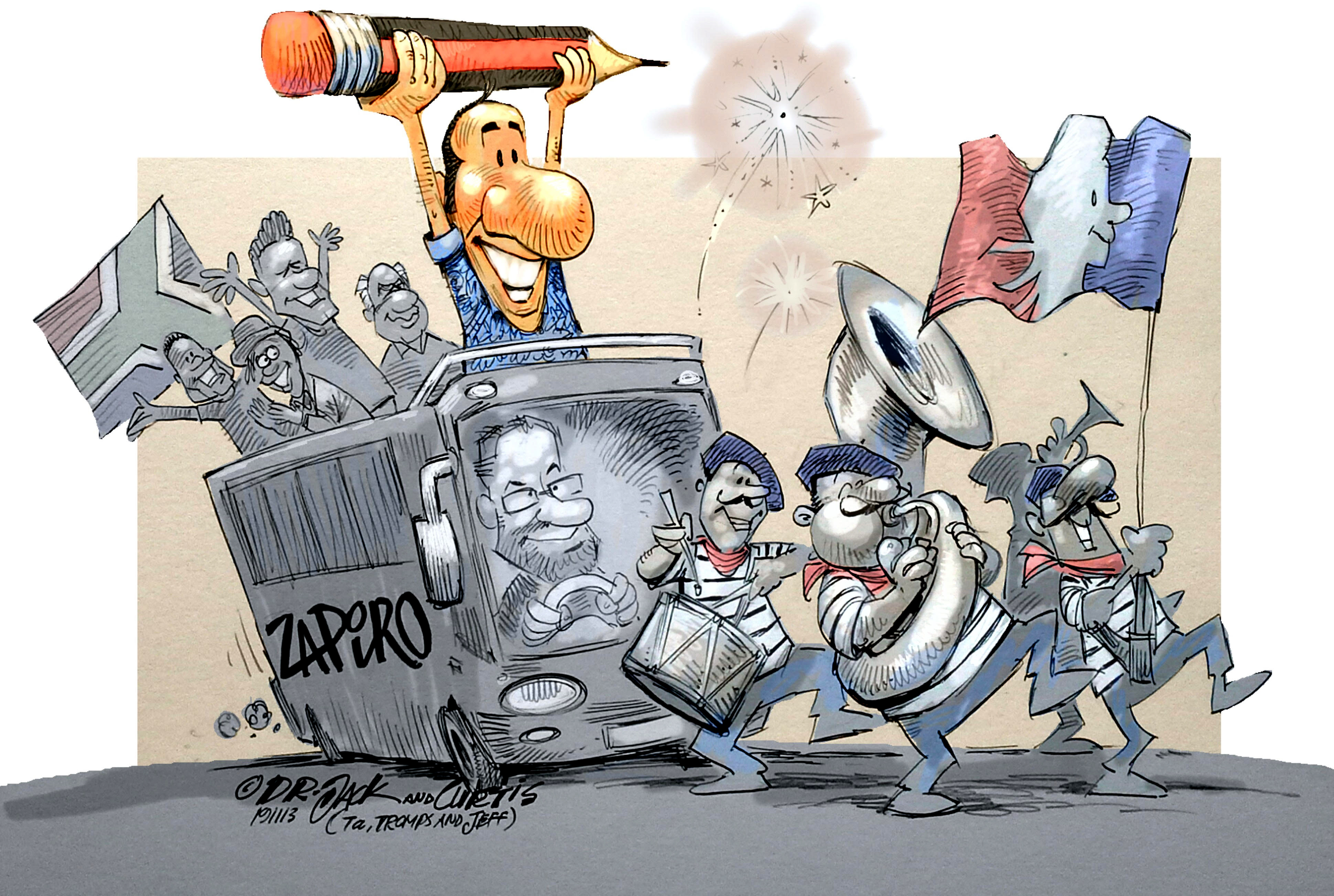 Born in Cape Town in 1958, Zapiro studied architecture before enlisting in the army while refusing to bear arms. In 1983, he joined the United Democratic Front, and later obtained a Fulbright scholarship to study caricature at the School of Visual Arts in New York, for two years. During a trip to Paris, he recalls looking for French comic book artist and scriptwriter – and the man behind Astérix et Obélix – Albert Uderzo’s home, in the hope of meeting him. Slightly lost, he managed to find the place at past 10:30 in the evening, and in spite of the tardiness, knocks on the door. A few hiccups (Uderzo didn’t speak English and Zapiro barely any French) and many questions and answers later, Zapiro had decided: he’d be a cartoonist.

He has published close to 20 annual bestsellers as well as The Mandela Files, VuvuzelaNation and Democrazy; he has won numerous awards, “including the Mondi Shanduka Journalist of the Year award, an honorary Alan Paton Award and two honorary doctorates”.

The Knight award acknowledges the fight he continues to fight for freedom of expression, equality and dignity.

“In a time of inequalities all around the world, in a time of divided societies in Europe… and in Europe, where sometimes people forget about values and principles, you go to all places, talk to people from all walks of life, rich or poor, black or white, with the same passion for truth and humankind. And you always stay true to your core values, the core values that some kind of fire ignited a few years ago, not very far from here, during your school years”, said Lechevallier.

“Today, we honour the activist, the freedom fighter, and also the messenger, the passer on, the one who shows the way and carries the values of the struggle to pass them through generations, without rest, and without borders”. ML