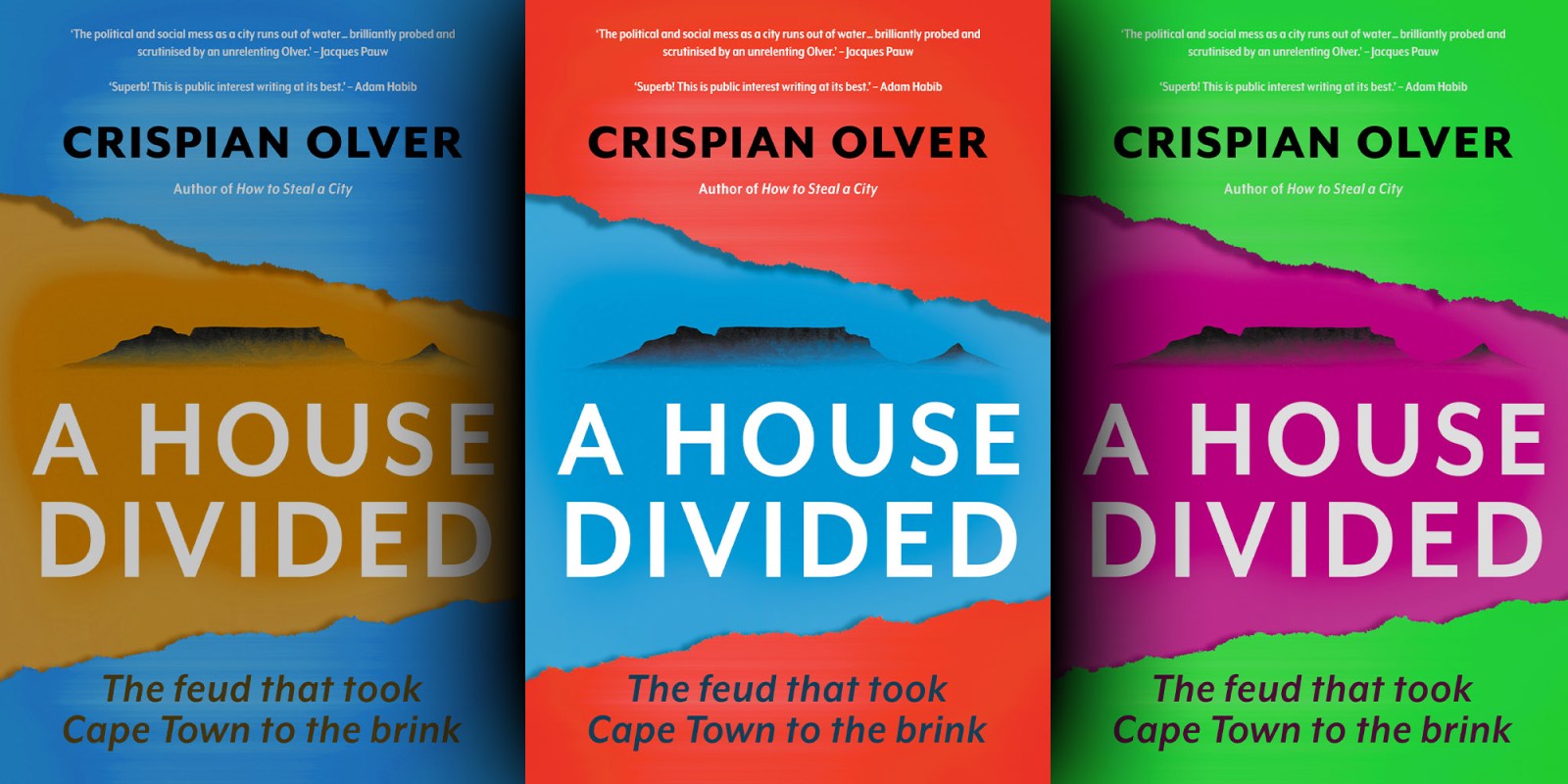 Crispian Olver’s first book, an insider’s account of corruption in Nelson Mandela Bay, was greeted with glee by the DA as an illustration of dysfunctional ANC governance. The DA has not shown similar enthusiasm about Olver’s latest publication – which turns the spotlight on the DA-run City of Cape Town around the period of the water crisis.

Crispian Olver’s How To Steal a City: The Battle for Nelson Mandela Bay was one of 2017’s most essential local reads: an insider’s account of the factional politics facilitating corruption in the Eastern Cape municipality.

Approaching the topic of his most recent book, Olver acknowledges that he was at more of a disadvantage. The veteran public servant had been ideally positioned to write about Nelson Mandela Bay after being deployed there in 2015 as part of an attempt to clean up local government by the minister responsible at the time, Pravin Gordhan.

But writing about the governance situation in the City of Cape Town presented some challenges. Olver was not an insider to that context. He did not live in Cape Town, although he was raised in the city as a child (an experience about which he expresses mixed emotions). Neither did he have any professional relationship with the DA which would enable him to access the kind of background information which might be useful.

The veteran public servant did, however, have one thing going for him: DA politicians “had been widely quoting my last book”. Yet, when Olver announced his intention to take a look at the governance of the City of Cape Town, a metaphorical door was immediately slammed in his face. Olver’s access to documents were denied. It was “not a good time”, City officials weakly explained.

What were they trying to hide?

It’s not totally clear whether A House Divided: Battle for the Mother City answers that question – or whether there is, in fact, a clear answer to that question.

One of Olver’s most important lines of inquiry was to investigate the nature of the relationship between the DA, City officials and Cape property developers, over which suspicion has hung for some years.

In interviews with former City staffers, he is told that some DA leaders in the City believed that “developers were always right, and when officials pushed back on development proposals, these DA leaders sided with the developers”.

Former mayor Patricia de Lille, Olver gathers, “seemed to have taken this willingness to give developers a free rein to such extraordinary extremes that it apparently alarmed even her own party”.

He does not find hard evidence of a corrupt relationship between developers and DA figures, although Olver is told by two former DA insiders (Grant Pascoe and Brett Herron) that Cape Town’s major property developers are donors to the party.

In Pascoe’s words: “It is the funders that really control the DA’s policies, that’s why the party is so supportive of the private sector.”

There is tremendous pressure on party leaders to raise funds, with the person who has succeeded in raising the most money awarded a prize at the DA’s annual federal council. But Pascoe also acknowledged to Olver that the DA is scrupulous about “proper management and accounting” of such donations: the DA figure who obtains a commitment from a donor is not allowed to be the same person who follows up to arrange the actual deposit, for instance.

Question marks remain. Olver records that De Lille was known to enjoy a close relationship with businessmen Mark Willcox and Tobie Mynhardt, who drove the proposal for the City to sell off the publicly-owned land of Maiden’s Cove for a private development.

More mysterious was one of the moves which ended up weakening De Lille’s position in the Cape Town City Council: the mayor’s demand that councillors suddenly sign off on a R9-million payment to the V&A Waterfront for the “maintenance of public open space”.

“The DA councillors were uneasy about it: the contract with the Waterfront was outdated, such extra payments had not been made before, and the supporting annexures were missing, as were the necessary signatures from officials. A flimsy legal opinion was attached, which indicated that a payment could be made but didn’t clarify why this particular payment was due.”

The councillors refused to make the payment, and the matter was never brought back before council.

This anecdote embodies many in the book: there is a strong feeling of irregularity around it, but no firm proof to that effect.

What Olver’s research suggests fairly unequivocally is that De Lille’s claims to have fallen foul of the DA because she was steadfast in her aim of dismantling Cape Town’s spatial apartheid are distinctly overblown.

Olver studies some of the major development projects that De Lille backed during her tenure as mayor, and fails to “discern an obvious or credible element of spatial integration in most”.

One of the developments De Lille expressed most excitement about was Wescape, a proposed new city offering affordable housing – which would be built about 25km north of the city. There were numerous other problems, including the financial bona fides of the developers and the fact that the proposed land was in a nuclear evacuation zone, but its distance from existing economic opportunities alone makes De Lille’s support for the project incompatible with her stated commitment to spatial integration.

Former City director for strategic urbanisation Seth Maqetuka also found that “when it came to securing more centrally located land – and conducting difficult negotiations with affluent neighbours pushing back against bringing lower-income residents to their part of town – the political support he needed from the mayor’s office wasn’t forthcoming”.

Perhaps the most damaging aspect of City governance in recent years, finds Olver, was a “massive, ill-conceived organisational restructuring” led by De Lille and her former right-hand man Craig Kesson. This restructuring centralised power around the mayor to a degree that Olver says he has not witnessed in any other South African municipality.

The knock-on effects of this were disastrous. One was the virtual collapse of the City’s housing programme following the dismantling of the housing department.

Another was the fact that there was a five-month period between the end of 2016 and early 2017, writes Olver, “while the DA haggled with De Lille over her mayoral committee, when the City was rudderless, deprived of the leadership a mayoral committee could and should provide”.

This could not have been worse timing in terms of the Western Cape’s water crisis, which Olver summarises as representing an “administrative, political and leadership failure” for the City. It would also precipitate the beginning of the end for De Lille’s mayoral tenure.

Ultimately, Olver cannot dig up in Cape Town the kind of wide-scale corruption he unearthed in Nelson Mandela Bay.

“My overall impression was that, while the odd official may still be willing to be involved in irregular deals, Cape Town’s administration seems generally well run and clean – particularly when compared to those of other cities. By most statistics, the Cape Town metro is doing well. The City administration has received clean audits for years, and its level of irregular and unauthorised expenditure is the lowest of any metro.”

But this does not mean the City is serving its citizens as it should in other respects. Olver is convincing on the point that the DA is effectively in hock to the interests of the private sector, and that those who have most to lose from this approach are the urban poor.

He is also clear that when the City of Cape Town faced its greatest challenge – and the DA’s greatest opportunity to put its claims of good governance to the test – in the form of the water crisis, it was bungled.

If the DA intends to quote from Olver’s latest book as it did with his first, the party will have to choose its extracts with great care. DM