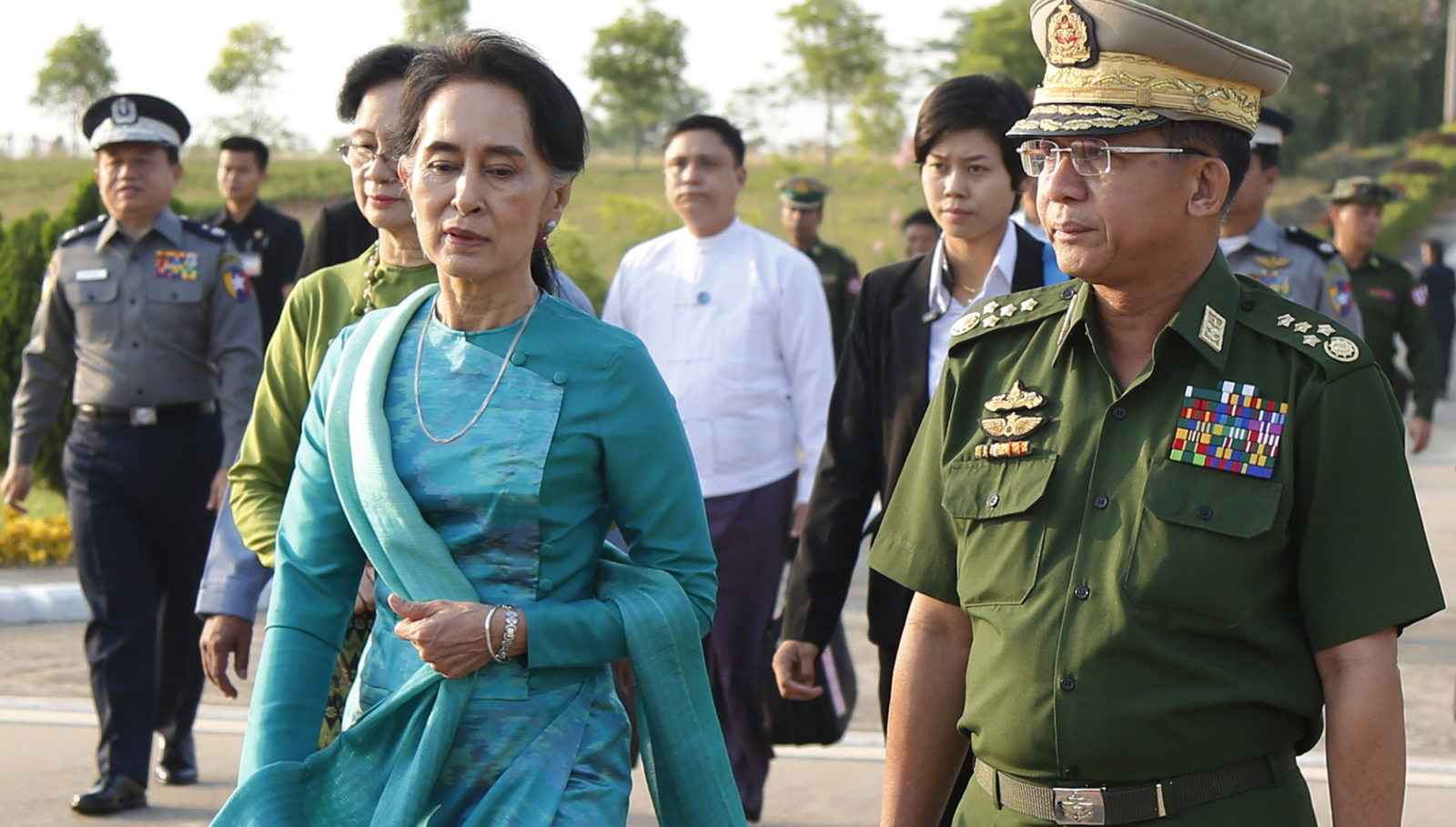 Senior General Min Aung Hlaing (R) and Myanmar Foreign Minister and State Counselor Aung San Suu Kyi (L) at Naypyitaw International Airport in Naypyitaw, Myanmar, 06 May 2016 (reissued 27 August 2018). According to an independent United Nations (UN) investigation report issued on 27 August 2018 -- on main findings and recommendations into facts and circumstances of alleged human rights violations and abuses carried out by military and security forces against Rohingya Muslims in Myanmar -- the investigation panel has called for the country's military leaders to be investigated and prosecuted for 'war crimes, crimes against humanity and genocide.' The Mission (independent international fact-finding mission on Myanmar), which was established by the UN Human Rights Council (UNHRC) in March 2017, names Tatmadaw Commander-in-Chief, Senior-General Min Aung Hlaing and five other military leaders as part of a 'non-exhaustive list of alleged perpetrators of crimes under international law' suggesting priority to the subjects for investigation and prosecution. EPA-EFE/HEIN HTET

The Gambia is exploiting a little-known and rarely-invoked provision of the 1948 Convention on the Prevention and Punishment of the Crime of Genocide to go after the government of Myanmar.

It’s usually foreign countries that take African governments to court for committing atrocities. But the little West African nation of The Gambia turned the tables this week by charging Myanmar in the International Court of Justice (ICJ) for alleged genocide against the country’s Rohingya Muslim minority.

The case which The Gambia filed on Monday, November 11, will bring the first judicial scrutiny of Myanmar’s campaign of murder, rape, arson, and other atrocities against Rohingya Muslims, 10 nongovernment organisations said in a statement.

Normally, the controversial International Criminal Court (ICC) – which has been rejected by the African Union (AU) and many individual African states – hears such atrocity cases. The AU has ordered its members not to cooperate with the ICC because it accuses it of picking on African countries.

All of the suspects of genocide, war crimes or crimes against humanity who have been tried before by the ICC so far happen to have been African. The AU and many of its member states – including South Africa (at least under the Zuma administration) – have also objected to the fact that the ICC does not grant any immunity against prosecution to sitting heads of state.

This controversy blew up in South Africa’s face in 2015 when Sudan’s then-president, Omar al-Bashir – who was deposed in April this year – visited Sandton to attend an AU summit. The ICC demanded that South Africa – an ICC member – arrest him under its ICC obligations as he had been indicted for genocide and other crimes in Darfur. But South Africa failed to do so and was reprimanded by the ICC.

In December 2017, the Zuma administration introduced legislation to withdraw South Africa from the ICC. But the Ramaphosa administration has not shown much enthusiasm for implementing the bill, though it’s still in the parliamentary process.

The ICC prosecutor Fatou Bensouda has sought to open an investigation for the crime against humanity of deportation and possibly other offences in Myanmar, but a broader investigation would need a referral by the UN Security Council. And the Security Council is blocked on this, as on many other issues, by irreconcilable differences between its three permanent Western members on the one side and Russia and China on the other.

However, The Gambia is exploiting a little-known and rarely-invoked provision of the 1948 Convention on the Prevention and Punishment of the Crime of Genocide to go after the government of Myanmar. Both The Gambia and Myanmar are signatories of that genocide convention and as such have agreed in principle that genocide, “whether committed in time of peace or in time of war, is a crime under international law which they undertake to prevent and to punish” and, by extension, have an obligation not to commit it.

“The convention permits member states to bring a dispute before the ICJ alleging another state’s breach of the convention, and states can seek provisional measures to stop continuing violations,” said the 10 NGOs – including the New York-based Human Rights Watch – in a statement.

“It is not every day that you see a small country like the [The] Gambia take up a major initiative on justice halfway around the world,” said Elise Keppler, associate director of the international justice programme of Human Rights Watch (HRW).

“This is a major positive action to advance much-needed justice for widespread atrocities committed against the Rohingya at a time when politics have blocked referral of Myanmar to the International Criminal Court.”

Param-Preet Singh, another HRW associate international justice director, noted that the genocide convention allowed member states to bring a dispute before the ICJ alleging another state’s breach of the convention.

“The Gambia’s legal action triggers a judicial process before the world’s highest court that could determine that Myanmar’s atrocities against the Rohingya violate the Genocide Convention,” she added.

States could also seek provisional measures to stop continuing abuses by the state being charged pending the finalisation of the case.

“The court’s prompt adoption of provisional measures could help stop the worst ongoing abuses against the Rohingya in Myanmar.”

In its first Genocide Convention case, the ICJ imposed provisional measures against Serbia in 1993 and eventually, 14 years later, found that Serbia had violated its duty to prevent and punish genocide in Bosnia-Herzegovina.

Singh told Daily Maverick that the provisional measures – in the form of temporary measures which the ICJ would hopefully demand from Myanmar – were important, “because the wheels of justice tend to move slowly”.

The Gambia was proposing provisional measures that would ask the ICJ to order Myanmar to cease any actions that would constitute ongoing violations of the genocide convention, pending the final resolution, which could take years. The Gambia was also asking the ICJ to order Myanmar not to destroy any evidence which could be used later in the case. She noted that Myanmar had already bulldozed villages where they had been accused of ethnic cleansing, in an apparent attempt to destroy evidence.

The precedents for this case are not completely encouraging, however.

In the case which Bosnia-Herzegovina brought against Serbia in 1993 through the ICJ in the middle of the Balkan war, the ICJ ordered Serbia to implement certain provisional measures within 19 days. However, Serbia challenged the measures in court and never really implemented them. In fact, in July 1995 Serbia’s ethnic allies in Bosnia-Herzegovina conducted a notorious massacre of Bosnian Muslims in Srebrenica.

It took until 2007 for the ICJ to issue its final judgment. It ruled that although Serbia could not be held accountable for genocide in Bosnia-Herzegovina in general, Serbia had violated the genocide convention precisely by not preventing the Srebrenica massacre and doing nothing to prosecute the perpetrators.

Singh acknowledged that no one could enforce the ICJ’s provisional measure:

“I think you have to make a distinction between implementation and impact, but even then, I don’t think it’s easy to assess.

“You could argue that Serbia didn’t really implement the ICJ provisional measures because of the Srebrenica massacre in July 1995. But that doesn’t mean they didn’t have an impact at the time they were ordered in Bosnia or vis-à-vis Serbia.

“It’s hard to evaluate the political cost attached to the measures, especially during an active conflict. So, in that way, it’s a less clear-cut example.”

Singh suggested the political costs to Myanmar of not implementing any provision measures ordered by the ICJ would be higher than in the Serbian case because of different circumstances. The costs would also be higher than any they had paid so far – for example than with the United Nations-backed Independent International Fact-Finding Mission on Myanmar.

“It would be yet another challenge to their ongoing denial that any atrocities took place, let alone that they had any responsibility for it,” she said.

The UN-backed mission had concluded in September 2019 that, “Myanmar is failing in its obligation to prevent genocide, to investigate genocide and to enact effective legislation criminalising and punishing genocide.”

The fact-finding mission had also highlighted “the enormity and nature of the sexual violence perpetrated against women and girls” during Myanmar’s military campaign as one of seven indicators of the state’s intent to destroy the Rohingya people, according to the 10 NGOs.

The mission called for the investigation and prosecution of Myanmar’s military leaders for genocide, crimes against humanity, and war crimes in Rakhine State in Myanmar, the state where most Rohingya lived.

“As a country recently emerging from decades of brutal dictatorship, The Gambia’s leadership on the Rohingya genocide is especially striking and welcome,” said Alison Smith, international justice director at No Peace Without Justice, one of the 10 NGOs. “Other members of the Genocide Convention should follow The Gambia’s lead and lend their clear and unwavering support.”

“The Gambia’s proceedings before the ICJ offer countless survivors of sexual violence and other victims some hope that Myanmar could legally be held to account for its ruthless campaign against the Rohingya,” said Melinda Reed, executive director at Women’s Initiatives for Gender Justice, another of the 10 NGOs. The NGOs said other legal actions addressing individual criminal responsibility were also under way at the international level, apart from those of the fact-finding mission.

The UN Human Rights Council has established an Independent Investigative Mechanism for Myanmar, which is mandated to collect evidence of the most serious international crimes and prepare files for criminal prosecution. They also mentioned ICC prosecutor Bensouda’s efforts to open an investigation.

The Myanmar government has failed to prosecute or punish any perpetrators of human rights abuses.

“The current domestic commission of enquiry established by the government follows eight failed commissions and lacks credibility, and its chair has stated that it will not hold those responsible for abuses to account,” the 10 NGOs said.

“The Gambia’s case before the ICJ could pressure Myanmar to reverse its course of violence and live up to its obligation under the Genocide Convention to punish those responsible,” said Andrea Giorgetta, Asia director at the International Federation for Human Rights, another of the 10 NGOs.

On November 11, the 10 organisations convened a meeting in The Hague with Abubacarr Tambadou, The Gambia’s attorney-general and justice minister, several representatives of the Rohingya community; and others who have supported this initiative to discuss the case.