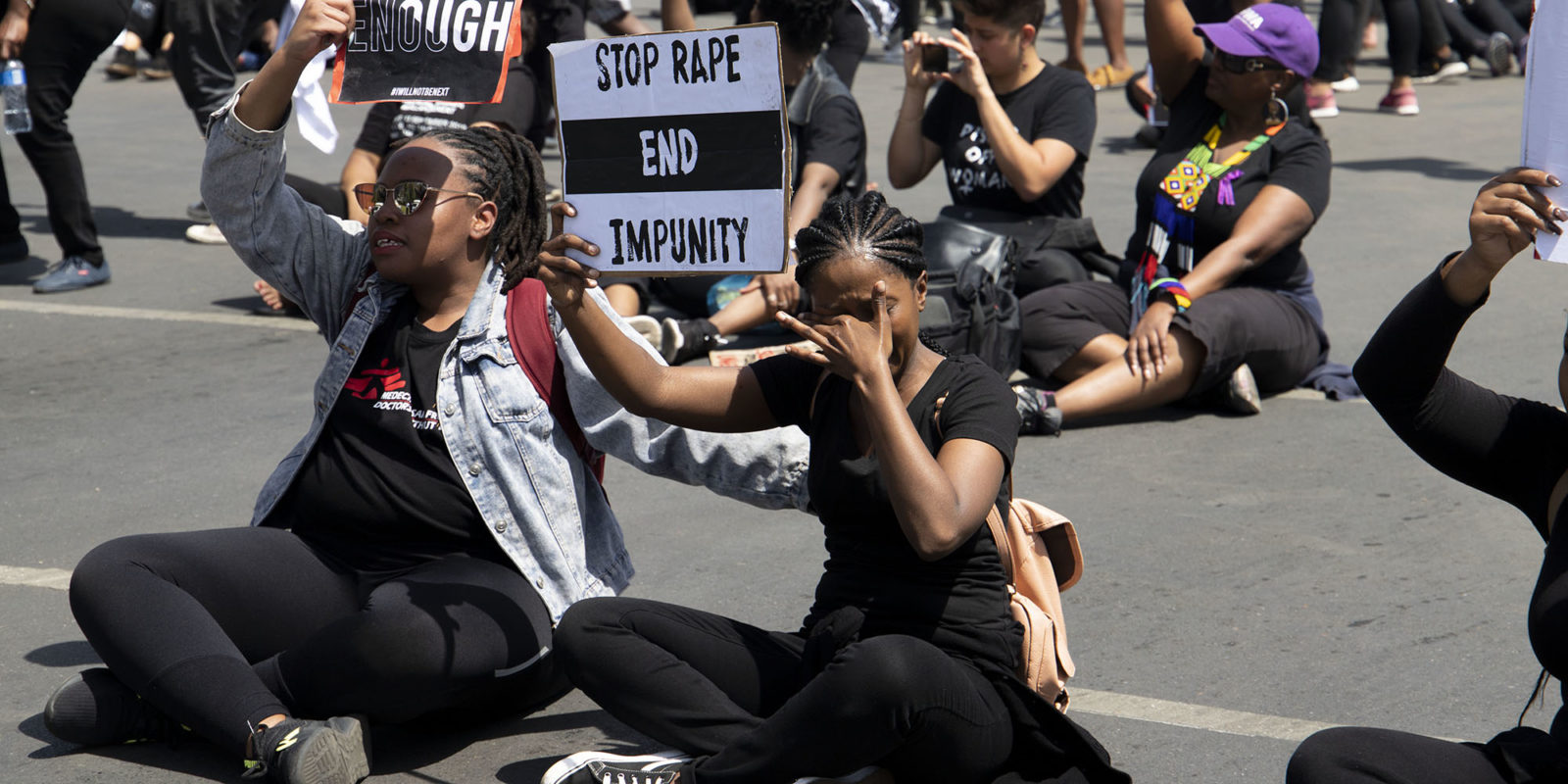 The Sandton Shutdown mass action against gender-based violence began with a sit-in at the Johannesburg Stock Exchange but later in the afternoon, a group of demonstrators left to begin their march around the area. During this time they stopped at several intersection in the block surrounding the JSE. Photo: Aisha Abdool Karim

TVET colleges ignored a summons from the Commission for Gender Equality, a Chapter Nine institution whose mandate is to advance, promote and protect gender equality in SA, to appear before the commission’s inquiry into gender transformation on their campuses.

Loveday College from the Eastern Cape and Coastal College in KwaZulu-Natal were a no-show on Tuesday 12 November at an inquiry instituted by the Commission for Gender Equality (CGE).

The colleges were scheduled to appear before the commission to deliberate on the slow pace of gender transformation in the TVET sector.

The commission said corrective action would be instituted against both colleges. Action will include the colleges being issued with a subpoena to appear and for them to pay for the expenses incurred on the first day of the sitting held in Braamfontein.

“We will write to the institutions to verify exactly what has transpired and their reasons for the non-attendance of today’s hearing. Section 18 of the act [Constitution] says if you act contrary to the authority, you can be found guilty of an offence and liable on conviction to a fine or imprisonment for a period not longer than six months,” said deputy chairperson Nthabiseng Moleko.

“Without a doubt, we will do a cost exercise of assessing what costs have been incurred as… wasteful expenditure; they will be liable for the costs. We will then draw up a cost register and a summary of those costs and send it to the two institutions who have failed to appear today and they will take responsibility for that.”

The inquiry was commissioned by the Chapter Nine institution to probe gender transformation in Technical and Vocational Education and Training (TVET) colleges in SA.

Moleko told Daily Maverick they would expand this investigation to cover all issues confronting the sector, but will do so within their mandate.

“We’re going to look at the status quo of the TVET sector in terms of transformation, and from there we are going to have a three-year approach with measurable indicators, targets and specific things that the CGE within its mandate can oversee and monitor over three years,” she said.

In 2016, the commission investigated gender transformation at institutions of higher learning, and according to Moleko this mandate only covered universities and not TVET institutions.

“TVET colleges are a new study and because of the nature of the TVET sector, its importance, we can’t allow this to go in passing. The sector is critical for South Africa’s economy, the poor, the rural and those who are in the margins. Now that they are proposing the Grade 9 certificate if this sector is not fixed it means there is no hope,” Moleko said.

The TVET sector is expected to be the absorbent for learners who complete their General Education Certificate (GEC) in Grade 9 when the system is implemented, despite its unstable environment.

The hearings will continue on Wednesday 13 November, with appearances from Motheo College from Free State and Taletso College from North-West. The commission said both institutions had confirmed their attendance. DM

*Loveday College responded to inquiries made by Daily Maverick and confirmed they will reply in due course. Coastal College was not reachable on both the landline and email address provided on their website.