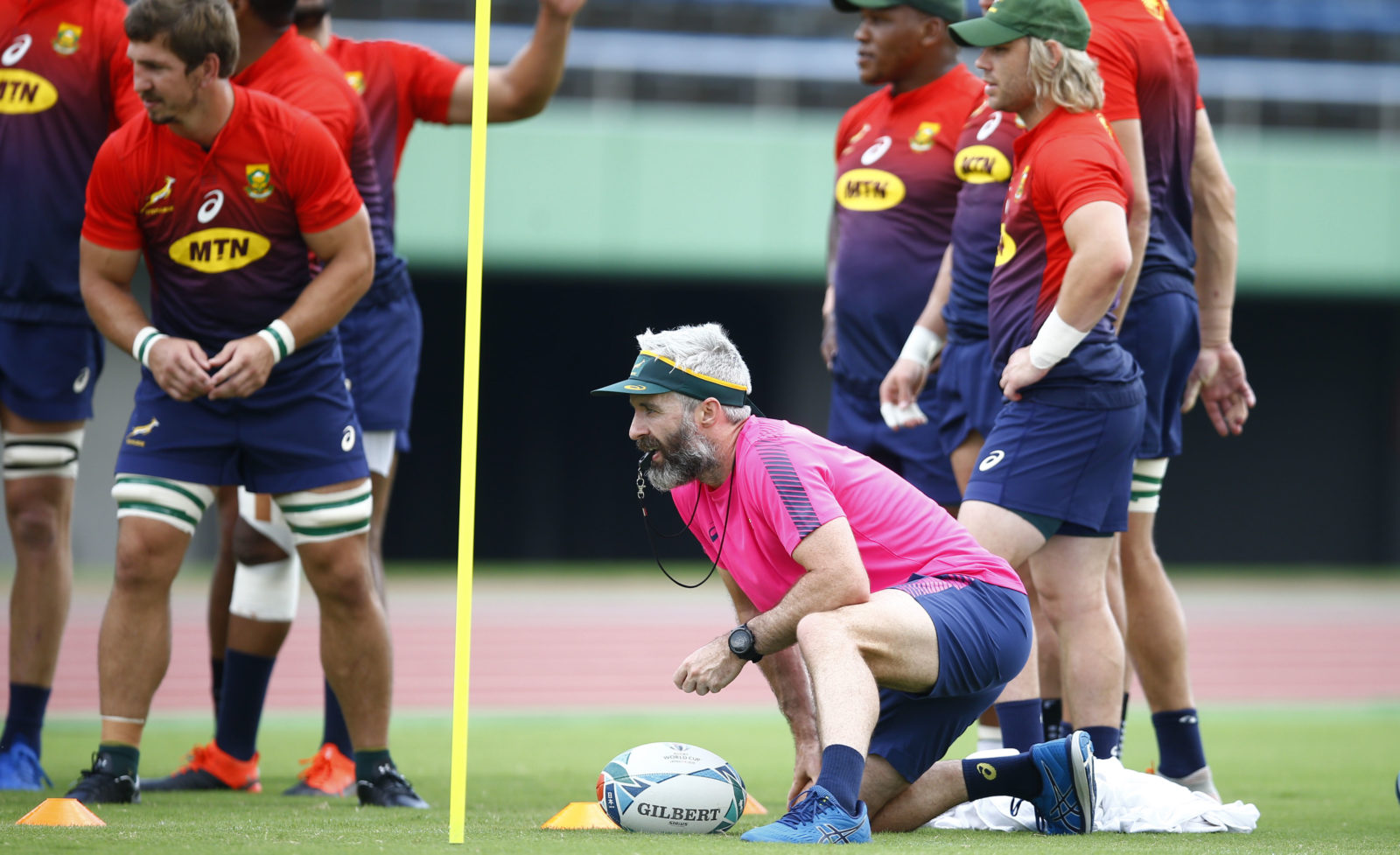 Springbok training sessions at Rugby World Cup 2019 were impressively structured and formatted. But often it wasn’t Rassie Erasmus conducting the sessions, but the Boks’ man in the shadows, Aled Walters.

Welshman Aled Walters, who is the Springboks’ Head of Athletic Performance, generally runs training sessions. As the person in charge of the players’ conditioning, training had to be structured to meet the team’s fitness objectives first, while encompassing their game specific needs. Walters is a crucial bridge between marrying these two vital components of success.

Erasmus’ game plan, which was based heavily on territory and set pieces, required athletes to be able to perform in certain ways. The wings had to be able to do repeat sprinting sessions, chasing kicks, while the forwards not only needed power, but agility to defend for long periods. Making tackles, getting back on their feet quickly and repeating the process over 80 minutes required less bulk but more aerobic capacity.

In the final, the Boks defended over 25 phases of England pressure on their goal line, without being fatigued to the point of conceding a try because someone wasn’t where he needed to be in the defensive line.

That passage of play, which turned the match irreversibly South Africa’s way, was a combination of Jacques Nienaber’s brilliant defensive blueprint and Walters’ superbly conditioned athletes wh0 were able to execute it. The former couldn’t have happened without the latter.

Walters’ methods were fun and focused. The players enjoyed hours of “gorilla ball”, a game played on a volleyball court using a medicine ball, which combined agility and strength.

On the field, sessions surpassed the match-day intensity, but they were always controlled. Everyone was monitored for signs of fatigue and stress and managed according to the data. Walters allowed nothing to be left to chance, although he’s far too modest to accept any plaudits.

A simple measure of how far the Boks have come under the Erasmus regime, which has included Walters from the outset, is how they have finished games in 2019.

After a season in 2018 when the Boks were putting the building blocks in place for their assault on both the Rugby Championship and the Rugby World Cup, their meticulous planning showed not only in scoreboard results in 2019, but in the way they finished matches.

In every other match this season the opposition scored fewer points than South Africa after halftime. Much of that comes down to superior fitness and fresher athletes as well as clever squad rotation.

“That was the broad picture, but then we also had to be clever around matches. We only had a six-day turnaround going into the final (England had seven days) so we needed to go into it with as little fatigue as possible.

“The six-two split between forwards and backs on the bench was critical. If you think that a forward has to scrum, maul, run and tackle and do that for 80 minutes, it will take too much out of him over a period of weeks. We wanted to target opposition set-pieces so we needed to manage the players accordingly.

“We physically saved our forwards during the tournament by rotating them regularly and it paid off. But I have to tip my cap to the players because they were unbelievably disciplined throughout the tournament in terms of their recovery protocols.”

Another measure of how well-conditioned the Boks were in 2019 was how few injuries players suffered throughout the season.

Various studies of rugby injuries, taken from different levels of the game, have found that at the professional level, 13-18% of players will suffer a serious injury during a campaign.

In a squad of 31 players that would be between four and six players suffering serious injuries, which on average require a 28-day recovery period. Leading up to the Rugby World Cup final the Boks of 2019 suffered two serious injuries – prop Trevor Nyakane and centre Jesse Kriel – over 12 matches. Walters’ methods and success cannot be underestimated.

Walters worked with Erasmus and Nienaber at Munster and the trio were starting to build something special at the club when Erasmus returned to South Africa. Walters didn’t have to wait long for the call to join the Boks.

“I accepted Rassie’s offer to join the Springboks instantly,” Walters said of the phone call that changed his life, and the Springboks’ path.

“I was struck by his belief in conditioning and his honesty. He trusts you to do the job you’re employed to do, and he allows you to shape the programme according to your expertise. He is just so transparent.

“What struck me when I first joined the Bok set-up was just how genetically gifted South African players are.

“There is such a broad range of athletes from Makazole Mapimpi, who is incredibly fast and fit, and who has the ability to repeat his intensity at training almost non-stop. He had to be taught to slow down.

“And on another end of the spectrum you have massive men such as RG Snyman, Eben Etzebeth and Lood de Jager, but they are all gifted athletes too. Really, the type of athletes South Africa has made my job easier.”

But despite being big men naturally, the Bok pack, in particular, was not the heaviest at Rugby World Cup 2019. In the final England’s pack weighed about four kilogrammes per man more than the Boks.

“We trained in specific ways to match the style we used,” Walters said. “We are an attritional team and enjoy physical contact, so our preparation had to match those tactics.

“But we also wanted the players to be able to repeat their effort. By that I mean they had to run and tackle, make contact but then get up and repeat those situations over an entire match.

“I couldn’t tell you what percentage change there has been in player fitness, but all I know is that for our system, players needed to be able to get off the line hard and repeat that for as many phases as the opposition had the ball. That was the goal. It wasn’t to have a player doing a faster time over a defined distance, or something like that.

“Those metrics might have improved, but it was a by-product of what we were trying to achieve with our game-specific training. The main thing for us was training at the same intensity, or above, of what we would experience in matches.”

Fitter, leaner, more skilled and mentally tuned-in players are the defining characteristics of the Springboks’ 2019 season. The glory will linger for years to come and Walters’ methods, coupled with the players’ professionalism and attitudes to training and recovery, should also filter down through South Africa’s entire professional system. DM