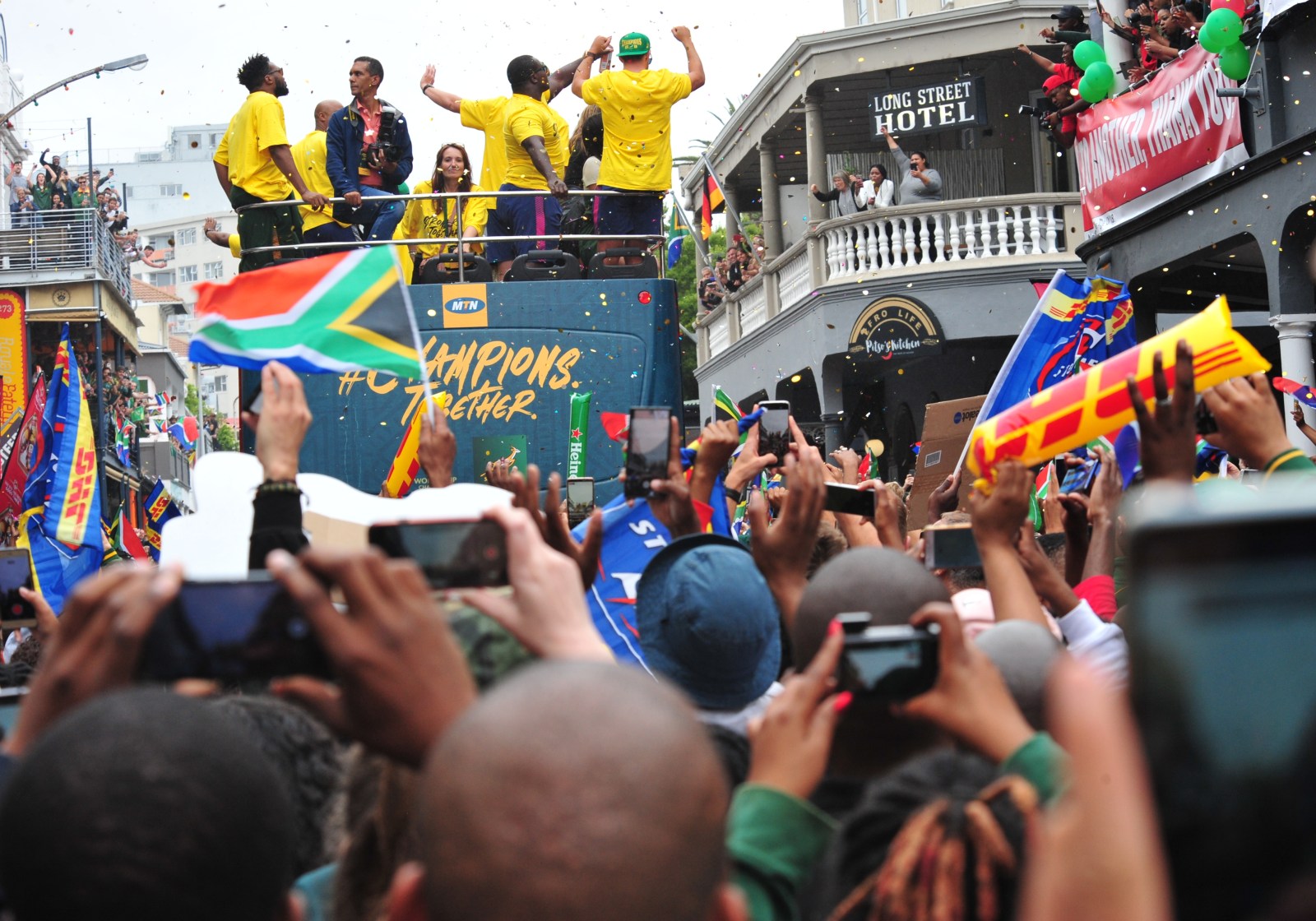 As they did at the Rugby World Cup final itself, a group of weary Springbok players and management made one final push to say thank you to South Africans on the final leg of their Trophy Tour through the Mother City on Monday.

After five days of unbridled joy and love from Pretoria to Soweto, from Joburg to Durban, East London to Port Elizabeth and, most moving of all, to captain Siya Kolisi’s hometown of Zwide, average South Africans from all walks of life shared in the pleasure of being the best at something.

The Springboks vowed to fight on the field to continue to be the best team on the planet and not let this moment of rugby supremacy be just that – a moment. But they also asked South Africans to follow their example and unite as a country, like they did as a team.

They asked South Africans to see their neighbours, colleagues, friends and even strangers, through new eyes. “Take yourself out of your comfort zone and work towards a better South Africa,” was the message that this group of champions have emphasised as they moved from one city to the next, running on adrenalin and emotion.

“Look at our team!” Kolisi told a crowd of about 10,000 people on Cape Town’s Grand Parade. “They are from different races and different backgrounds, but we came together for South Africa.

“And we are saying to you today, just take a look around you, there are so many different people from different races and backgrounds. But look how special this is. It’s time for us South Africans to stop fighting and arguing. Let’s put South Africa first, so we can move forward as a country. Thank you, we appreciate you.”

It was symbolic that Kolisi, the first black Test captain of the Springboks, stood under a statue of Nelson Mandela, and only a few feet from Archbishop Desmond Tutu, as he made the statement. In some ways it felt like a torch had been passed from that generation of leaders to this 28-year-old sportsman, who embodies the best of the country despite coming from the harshest of backgrounds.

His story from starving child to leading the team that used to be the sporting embodiment of the apartheid regime is uniquely South African. And given the way average South Africans across social, racial, age and gender divides responded to Kolisi, this tour has shown that if he wants a future in politics, he will have no shortage of support.

Even his teammates who come from more privileged backgrounds were moved by the support of all South Africans in places where many of them might not have been before.

“You won’t believe what we have seen on this tour around the country,” newly crowned 2019 World Rugby Player of the Year Pieter-Steph du Toit said. “I can’t really put it into words. People know every player’s name and they are passionate about the Springboks.

“We as players need to put our individual goals on the back foot and try and put the team first. South Africans have put us first and we need to do the same with them.

“One of the things that stood out for me on this trophy tour was being on the bus and making individual eye contact with people on the street. You really connected. You look at someone and wave to them and they shout your name back at you, especially in some places where I never thought people would know my name.

“There was one incident where I saw an old lady fall down and everyone rushed to help her. There was concern and help from strangers of all races. It was about putting someone else first, just like we did at the Springboks.”

Du Toit understands though that keeping the positive mood of the country going will require the Springboks to stay at the top of the world rankings and back up their RWC 2019 win on the field in years to come.

“We have struggled to be consistent as a team over the past 12 years,” Du Toit said.

“It took us 12 years between RWC wins. Hopefully, we can now become consistent and with the coaching set-up we have, we can do that. The coaches have plans in place already and SA Rugby is putting the foundations in place for us to become consistent.

“We are trying to get young players to come through a better system at a lower level to be ready for the highest level. And for the players already with the Boks we need to be mentally ready to adjust and become more consistent by having a champion mindset. That is a massive thing for us.”

Scrumhalf Herschel Jantjies, who a year ago was the third-choice scrumhalf at Western Province, was the second youngest member of the squad. What he has witnessed over the past week has left a profound imprint on him.

“Every city we went to had its own unique way of saying thank you and celebrating with us,” Jantjies said. “But yesterday (Sunday) in Zwide was special.

“People ran alongside the bus. They must have run for kilometres. The emotions were massive – there were people crying and people shouting with joy.

“Seeing that made me realise that we did it for all South Africans.”

For Cheslin Kolbe, who is based at French club Toulouse, the tour was a reminder of South Africa’s spirit.

“I was moved when I saw the thousands of people who stood for hours at airports around the country and then only caught a glimpse of us for a few seconds,” Kolbe said.

“That showed us how proud the whole country is of us, and it makes you realise that you have to try and give back as much as you can to each person. There were so many special moments but watching a few kids run with the bus for kilometres on end was special.

“The one kid was so thirsty, but he kept on running. It’s the small things like that, which we take for granted sometimes, that makes you realise how children look up to us. We are grateful for that and I hope we can do better for them in the future.

“I’m just a player living my dream, but I will try wherever I can to put a smile on the face of a small child, or an adult. It’s the little inches that can make a difference in someone’s life.

“It’s up to all South Africans, from the president down, to lay the foundation for hope in South Africa. Our motto at the World Cup was “stronger together” and I believe that it can be used for all of South Africa.” DM