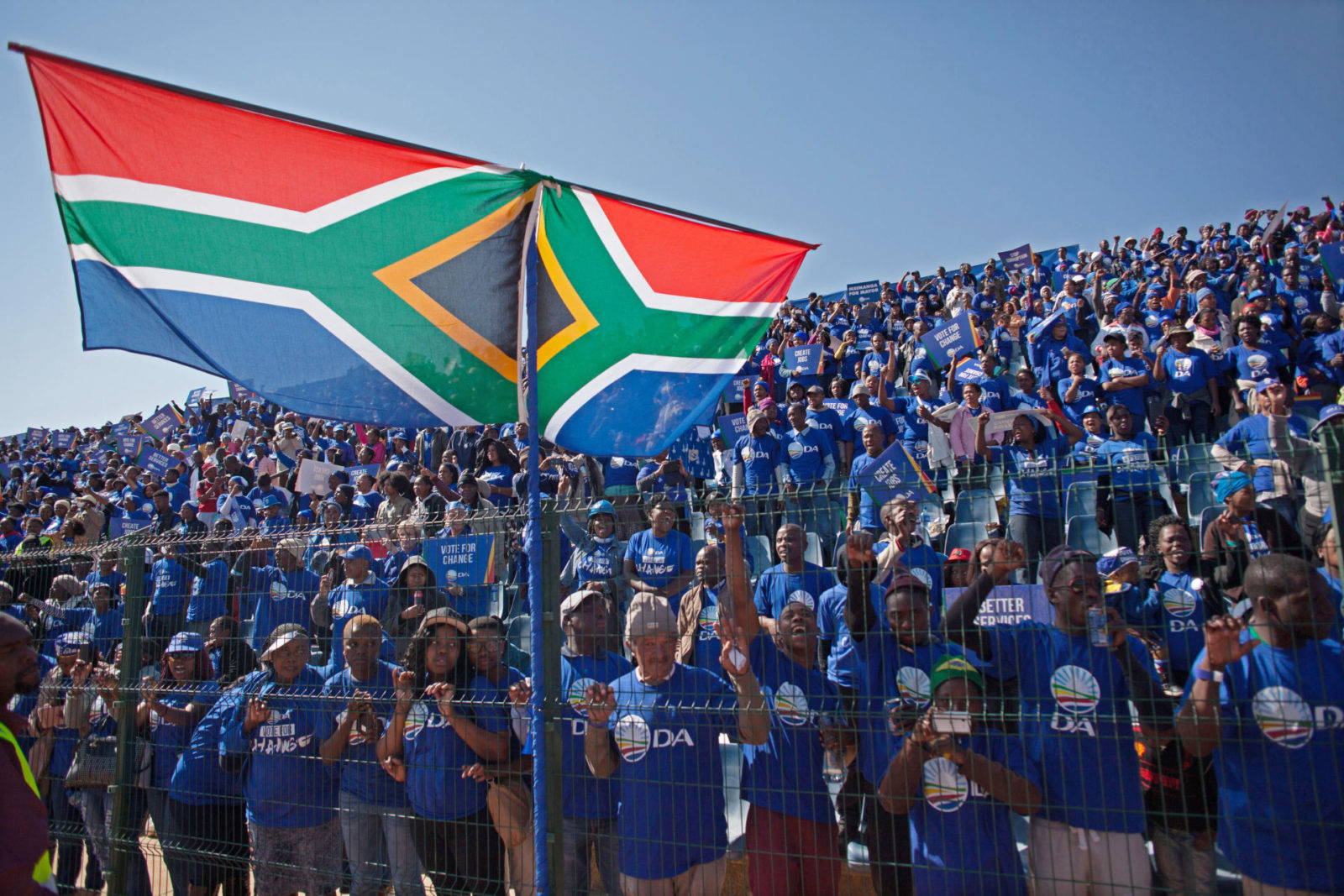 Having worked in DA politics and government for over a decade, I never cease to be amazed at how poisonous the manufactured outrage of sideline spectators like Poplak is.

(Editor’s note: While we are happy to afford the Right of Reply to the DA, we stand by Richard Poplak’s reporting.)

In his Daily Maverick piece Get Out – a gutted DA stumbles into the past of 25 October 2019, Richard Poplak presents his personal prejudice about the Democratic Alliance as objective truth.

His winding, contrived tome is yet another example of the media’s obsession with the cult-like politics of personality and race. All that these evidence-free opinions, presented as facts, serve to do is divert attention from the real issues bringing South Africa to its knees.

Having worked in DA politics and government for over a decade, I never cease to be amazed at how just poisonous the manufactured outrage of sideline spectators like Poplak is. Writing for each other (rather than the public), these commentators use their “wokeness” to compensate for their own elevated social positions and present their subjective, evidence-free opinions as objective truths.

Were the DA genuinely an incompetent or corrupt band of racist bandits, either in government or in opposition, the criticism would be valid. In reality, the DA is not only the most racially diverse political party in South Africa, but it remains – objectively – the party that has delivered the biggest basket of the highest quality basic services to citizens where we govern.

Beyond the party’s track record in government, our rejection of race as the single and only proxy for disadvantage stems from South Africa’s struggle for non-racialism, and the values entrenched in our constitution. Our transition, which remains celebrated as the world’s finest post-conflict reconciliatory model, is founded on this very principle.

Yet according to analysts like Poplak, non-racialism (and the emphasis on capacity rather than colour) has now become a reactionary position.

Poplak does not understand – by his own admission – how internal DA elections work, nor has he sought to interrogate the demographics of the actual base from which Zille derived her support during the October election. These inconvenient facts render his analysis invalid. He is entitled to his opinions on the various candidates, but not to invent a parallel universe of alternative facts.

Strangely, despite their default to race, side-line commentators like Poplak continue to denigrate DA leaders of colour (which include eight out of nine provincial leaders and about 80% of the party’s Federal Executive) as pliable puppets, devoid of intellectual and moral autonomy. This is the clearest illustration of the extent of racism, and the denial of individual freedom, inherent in the blinding wokeness of such commentators. Any genuine progressive would reject this bigotry out of hand.

Beyond Poplak’s initial race-baiting is his notion that in government between 2006 and 2018, the DA, under Zille’s leadership in government, “visited monstrous injustices upon the city’s poor”. There is not a shred of evidence for this. The very opposite is true, and in opinion surveys, significant numbers of voters of all race groups in the Western Cape recognise that the DA does a much better job in government than the ANC. But facts would get in the way of his facile analysis, so they are simply ignored.

Under Zille’s “monstrously anti-poor” reign as premier, more than 212,967 affordable and subsidised houses were delivered, with a further 105,500 due by 2022. The Western Cape received the highest number of clean audits in South Africa in the last year of her premiership at 83%.

Over 80% of schools were provided with access to free internet. Employment grew by 24.8%, and the Western Cape obtained the lowest unemployment rate in the nation at 14%.

While national government continued to systematically chase away foreign direct investment, with direct consequences for the country’s poorest citizens, during Zille’s tenure more than R100-billion was invested into the Western Cape as a result of Foreign Direct Investment, creating more than 19,000 jobs.

According to the StatsSA 2018 community survey, adult literacy in the Western Cape in 2018 hit the highest in the country at 98.2%. As a result of social interventions undertaken by Zille’s cabinet, the province also boasted the highest number of children living with both parents at 53.7% compared with the Eastern Cape and KwaZulu-Natal where percentages sit just above 21%.

Just in case these statistics don’t pour cold water on Poplak’s false narratives about the alleged anti-poor agenda of the DA in government, the Western Cape obtained the highest rating of the quality of electrical supply services at 84.5%; highest percentage of households with access to piped or tap water at 98.7%; and lowest rate of water interruptions per province at 1.4%. Notably, the highest percentage of households with access to improved sanitation also happened to be in the Western Cape at 93.8%.

In the City of Cape Town, where DA political leaders had to step up to plug the gaping holes left by the national department’s failure to provide the municipality with bulk water during the City’s worst drought in living memory, more than 85.1% of residents continued to rate the quality of water services provided by the municipality as good – again, the best score of all municipalities in the country.

At the City of Cape Town, under a DA-led government, the total cost of the social package for poor residents amounts to R2.95-billion this year alone – R1.47-billion is spent by the municipality on indigent relief, and R1.48-billion on rates rebates for low-income households. The municipality boasts the lowest water losses in the country at 16% and pays their creditors on time so that small businesses can stay in business.

On the social housing front, the City of Cape Town has recently completed over 2,168 social and gap housing units with 2,488 units currently in the process of construction. A further 5,196 social housing opportunities are in the pipeline over the next three years. This is in spite of the national government’s refusal to release prime land to the City.

Unemployed residents in Cape Town are provided with free MyCiTi bus trips on a weekly basis to search for employment. Cape Town has further consistently provided the highest number of Expanded Public Works Opportunities for the poor of any metro in the country.

Perhaps the real humdinger of Poplak’s Ill-concealed rant was the notion that Zille (as ex-premier) must accept a “huge part of the responsibility” for Cape Town’s position as “one of the murder capitals of the known universe”.

Poplak couldn’t bother with details such as the national government spending R1.5-billion on VIP protection for 17 politicians, while the SAPS (which is the sole responsibility of national government) continued unravelling. Nationally, the average police allocation to residents has worsened to one officer for every 375. But in Cape Town, the national department allocates a dismal one officer for every 560 residents, with a particularly starved ratio of 1:628 in the community of Nyanga and 1:745 in Khayelitsha. All entreaties to address this situation by the DA-controlled governments in the Western Cape have fallen on deaf ears.

Now the City of Cape Town and provincial government are again being forced to fund the functions of the national government. Although it is not their mandate, and they do not have the funding for it, the Western Cape government has taken R1-billion from other service priorities, over the next three years, to plug the gaping hole the national government has left in public safety. More than 3,000 Metro Police-managed law enforcement officers are currently in training for local deployment.

I claim no monopoly on the truth, but what I do know is that every single DA public representative working day in and day out to make South Africa work cares deeply and personally about our nation and its future.

Contrary to the small group of nasty commentators who prefer to throw rocks from the sidelines, those of us who are actually in the arena know in our very hearts that in spite of its current skirmishes, the DA stands as the last line of defence against the wholesale destruction and eventual collapse of our nation.

Most fundamentally, we are democrats, and if Zille won the majority vote as Chairperson of the Federal Council in October, and if John Steenhuisen was elected – uncontested – by the entire DA Parliamentary caucus as interim Parliamentary leader last week, it is because of those leaders’ formidable track records and not because of their skin colour.

Like it or not, the days of identity politics being used as successful tools to divert and undermine robust democratic processes are drawing to an end. Poplak would do well to take note and spend his energies focusing on a genuine analysis of national developments that, if left unchecked, will spell devastation for South Africa. DM

Emma Louise Powell is a Member of Parliament and the DA’s Deputy Shadow Minister for Water and Sanitation and Human Settlements.