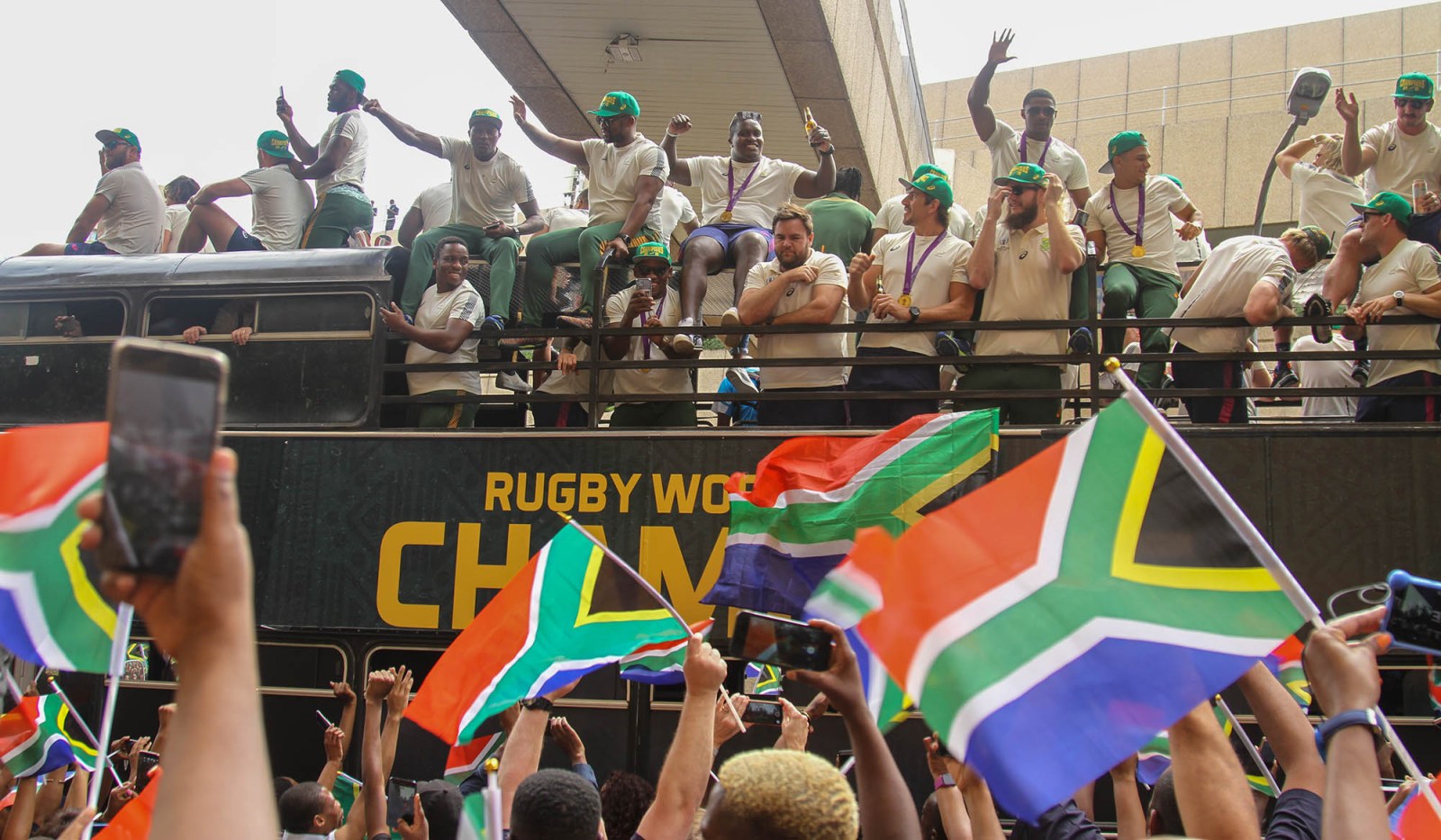 The Springboks began their Champions Tour of South Africa in Gauteng — large crowds waited to see them and the famous Webb Ellis Cup up-close. 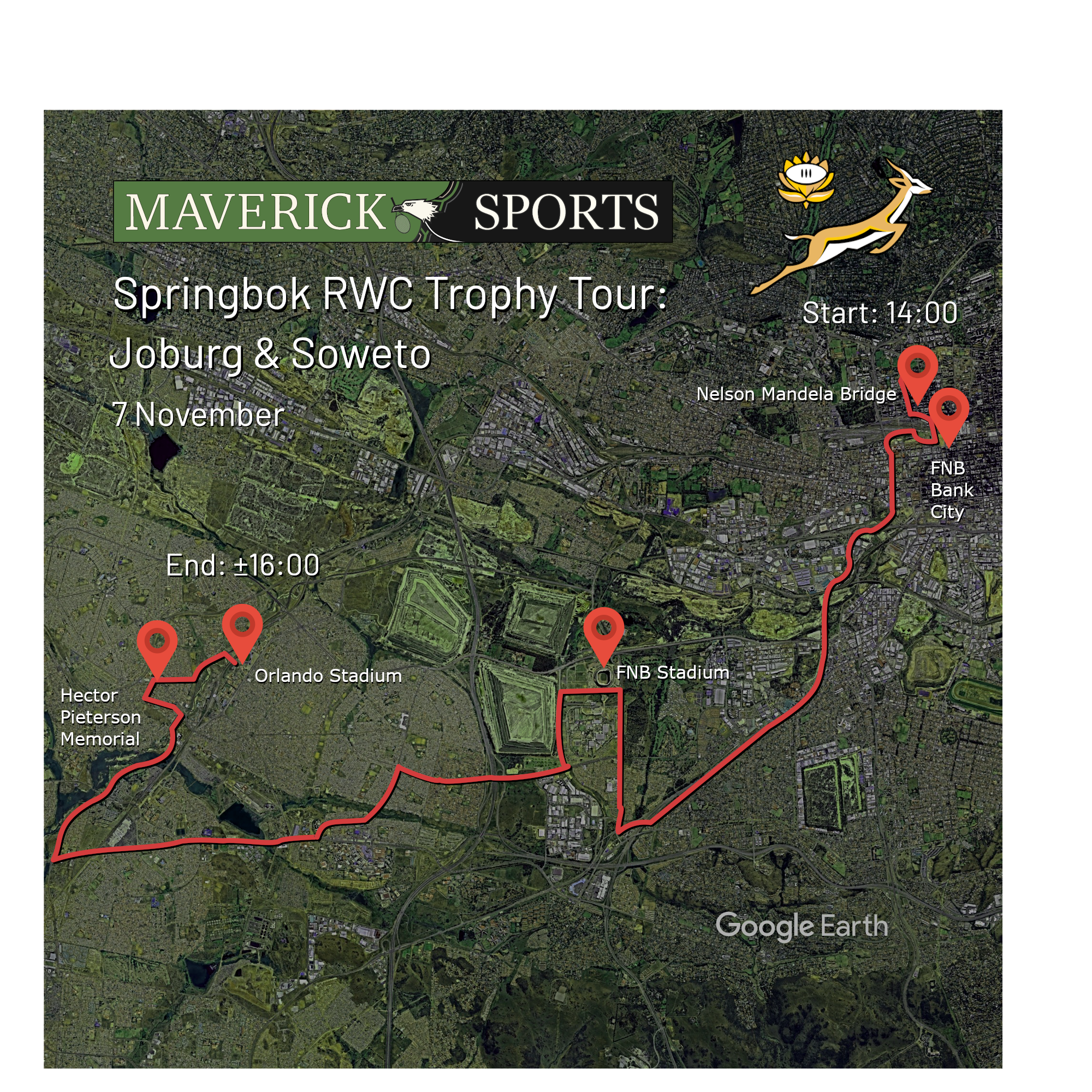 South Africans of all creeds, backgrounds and ages came out in their numbers as the World Cup-winning Springboks began their five-day, four-province lap of honour after their world-conquering exploits in Japan.

The Boks, riding an open-top bus, had started off the Gauteng leg of the tour in Pretoria at the Union Buildings. President Cyril Ramaphosa, a few of his ministers and a handful of fans were there to greet their heroes.

The Boks then left the Union Buildings to begin cruising the streets of Pretoria. Then off they went to Johannesburg, where the iconic Vilakazi Street in Orlando, Soweto was the final stop, after a route change enforced by time constraints.

One of those anxiously waiting for the Boks at that venue was 41-year-old Sylvester Ngwenya. He expressed his elation at the opportunity of having a chance to glimpse the Webb Ellis Cup with the naked eye.

“I feel happy about being here because we are united, the weather is perfect and everyone is just happy. We have been patiently waiting for them, we want to see them. We want to see this cup. Gold is from Africa, right? So, they’ve brought it back to where it belongs,” said Ngwenya.

Ngwenya, a resident of Zola, Soweto, had been in Vilakazi Street since the early morning and was selling Springbok merchandise. He told Daily Maverick he fell in love with rugby because he has been selling merchandise at rugby matches for two decades, and through this, he has grown to know and love the game.

“I finished high school in 1996, then I did a business management course. I’ve been selling merchandise since 1999 — at rugby games, cricket and the Soweto derby. This is how my family and I survive” Ngwenya told Daily Maverick.

Another fan patiently waiting for the Boks to arrive was Taylah Lawrence. The 18-year-old was out with her family in Vilakazi Street, waiting in uncontainable excitement to glimpse her idols. She told Daily Maverick that her family are frequent visitors to Soweto, but that the atmosphere today was a bit different.

“Soweto always has this type of vibe to it, but definitely now that the Springboks have won the World Cup – there’s a bigger sense of spirit, and everybody is just in a fun and happy mood. And there’s just a sense of a strong unity among us all” said Lawrence.

Before heading to Soweto, the procession kicked off the tour of Johannesburg in the student hub of Braamfontein.

A student who became absolutely hysterical as the open-top bus with the world champions crawled by was Matlou Selematsela, a first-year speech-language pathology student at Wits:

“Guys, the Springboks are a whole vibe, a whole vibe. I love them. I mean, look at this. We don’t always get this,” she said, pointing at the South African flag-waving throng who had broken out in song, singing Shosholoza.

The Bok party next moves to Durban on Friday, 8 November followed by East London on 9 November, Port Elizabeth on 10 November and finally Cape Town on 11 November. DM