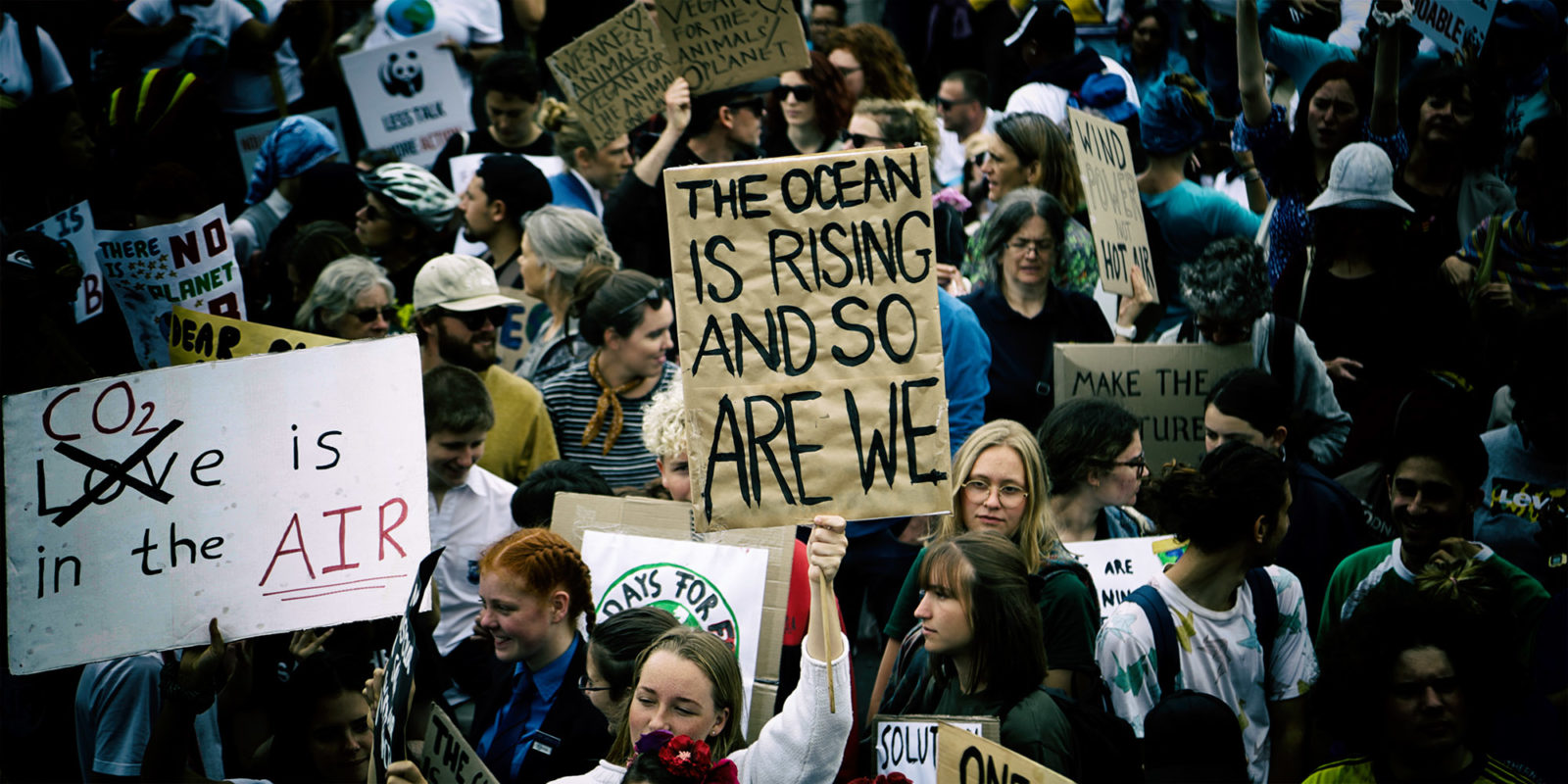 Thousands of citizens and activists marched to Parliament in Cape Town, South Africa, forming part of a global movement that demands an end to the age of fossil fuels and embraces a new age of renewable energy and climate justice, 20 September 2019. (Photo: Leila Dougan/Daily Maverick)

To continue life as we know it is to plunge the planet and its people into ecological catastrophe. To change course requires a fundamental rethink of the economic and financial models many take for granted. A groundswell of change has begun and is likely to gather momentum.

Nat Ware was born in one of the poorest suburbs in Australia to two school teachers. At 16, he raised more than $100,000 to rebuild a school in Mozambique; at 19, he founded a consultancy to improve the effectiveness of educational organisations and at 25 he did a PhD on education finance at Oxford to get to the heart of the problem.

In the process, he developed a better way of financing education at no cost to individuals or governments, and created his company, Forte, to give it life.

Society doesn’t have a way to finance high-quality education, particularly vocational reskilling, at the scale required.

“It is not just the millions of tech-induced unemployed that will require re-skilling,” Ware says. “It could also be refugees, former prison inmates, racial minorities and indigenous populations.”

Expecting people to finance their mid-career education when they are living paycheck to paycheck is unrealistic. For various reasons relying on loans, government funding or philanthropy is unrealistic at scale, which is why he invented tradeable income-based securities (Tips).

This enables the cost of education to be covered by the increase in future income tax revenue caused by that training.

“The cost of training is often less than the increase in future tax revenue caused by that training. Think of it as ‘Lydia’s future taxes paying for Lydia’s present training’,” Ware says.

Investors, via Forte, cover the cost of training for individuals who would otherwise be paying no or negligible tax. This training, by its nature, increases expected employment, income and government income tax revenue.

In return, each year, for a set number of years, the government passes back to investors, via Forte, a portion of the tax revenue collected that is attributable to the training recipients.

Ware is one of a growing number of people who recognise that the current economic system, which presumes the world’s resources are infinite, needs to change. “Capitalism is a powerful tool and the profit motive is powerful. However, we need to adjust that motive in order to align social and profit returns,” he says.

He was presenting at The Club of Rome’s annual summit, held outside Stellenbosch at Spier on 6 November 2019. The organisation, founded in Italy in 1968, is comprised of individuals who are trying to promote understanding of the global challenges facing humanity, while simultaneously proposing solutions through scientific analysis, communication and advocacy.

The club is probably best known for a seminal piece of research, released in 1972, entitled The Limits to Growth. The central message, which still holds true, is that the earth’s interlocking resources — the global system of nature in which we all live — cannot support present rates of economic and population growth much beyond the year 2100, even with advanced technology.

This was viewed as heresy at the time. Yet now, more urgently than ever, human society needs to rethink its approach to climate change, as well as the economic and financial models that sustain society as we know it, if we are to avoid a cataclysmic climate event.

“We have lost our way as a human community,” says Dr Mamphele Ramphele, who is co-president of the Club of Rome, along with Sandrine Dixson-Declève. “The biosphere is under severe stress. It is appropriate that we have come back to where the human story began to discern the lessons from the mother continent. We need to harvest the wisdom that enabled humanity to evolve here. We need to understand what went wrong and why. We also need to embrace complexities as we explore how we emerge from the climate emergencies we have brought upon ourselves.”

The biggest existential crisis facing the planet and those that live on it is planetary warming.

Temperatures have already increased by 1°C in the past 100 years and are rising at an exponential rate.

“A 2°C change is at the boundary of extremely dangerous climate change, 3°C represents extreme social chaos and 4°C is where we are headed,” says Ian Dunlop, chairman of Safe Climate Australia and a former chairman of the Australian Coal Association.

“While the Paris Climate Agreements commits us to keeping warming below 2°C, a 1.5°C change by 2030 is inevitable. The challenge is to stop us going above 2°,” he says.

Part of the problem lies in the way we talk about the climate crisis. People don’t understand the hard-nosed impact. How will farmers cope with drought, floods, dying animals. Do we understand that one billion people will be displaced? he asks.

The absolute bottom line is that the expansion of fossil fuel usage must be stopped, and fast.

“That is the only thing that will stop us going above 2°C.”

But the fossil fuel economy is well embedded in the global economy. It is funded by global banks and pension funds which invest ordinary people’s savings into it.

In turn, the revenues, profits and taxes from this economy keep nations afloat and giant multinationals powerful.

“We have the know-how and scientific means to have a successful low carbon economy,” says Dhesigen Naidoo, CEO of the Water Research Commission. “The limitations are not science and technology; it is the way we are locked into the system.”

This means re-framing economics and finding new finance mechanisms. The current system is deepening inequality and the prospect of catastrophic climate breakdown is getting closer and closer.

“We are on a path to self-extinction. This reality stems from the destructive impact of deeply flawed cultural, institutional, technological, and infrastructure choices,” says David Korten a former professor at Harvard Business School and president of the Living Economies Forum.

In the past 40 years, humanity as a whole has gone from using one planet’s worth of natural resources each year to using one point seven times, and is on course to using three planets’ worth by 2050, he says.

It doesn’t have to be this way — after all, the economic system was designed by people, and can, must, be adjusted, Korten says.

However, pockets of change are visible across the world.

A global alliance of citizen movements has banded together under the banner of WEALL to work for an economy devoted to the well-being of people and planet.

The government of Bhutan, sandwiched between India and Tibet, led the way when it enshrined the philosophy of Gross National Happiness in its constitution in 2008.

More recently, the government of New Zealand announced a new budget that shifts the focus from growing Gross Domestic Product (GDP) to growing well-being. This is being mirrored by others including Iceland and Northern Ireland.

The Club of Rome, a global alliance of new-paradigm thought leaders, has launched initiatives on the climate emergency, a new civilisation, a new economics and a new finance.

“Maintaining the status quo is not a viable option,” says Korten. “But we can also see that this crisis presents an unprecedented opportunity. We can rethink the choices we have made and commit to achieving something different, a world that is community-centric, ecologically balanced and spiritually fulfilling.” BM