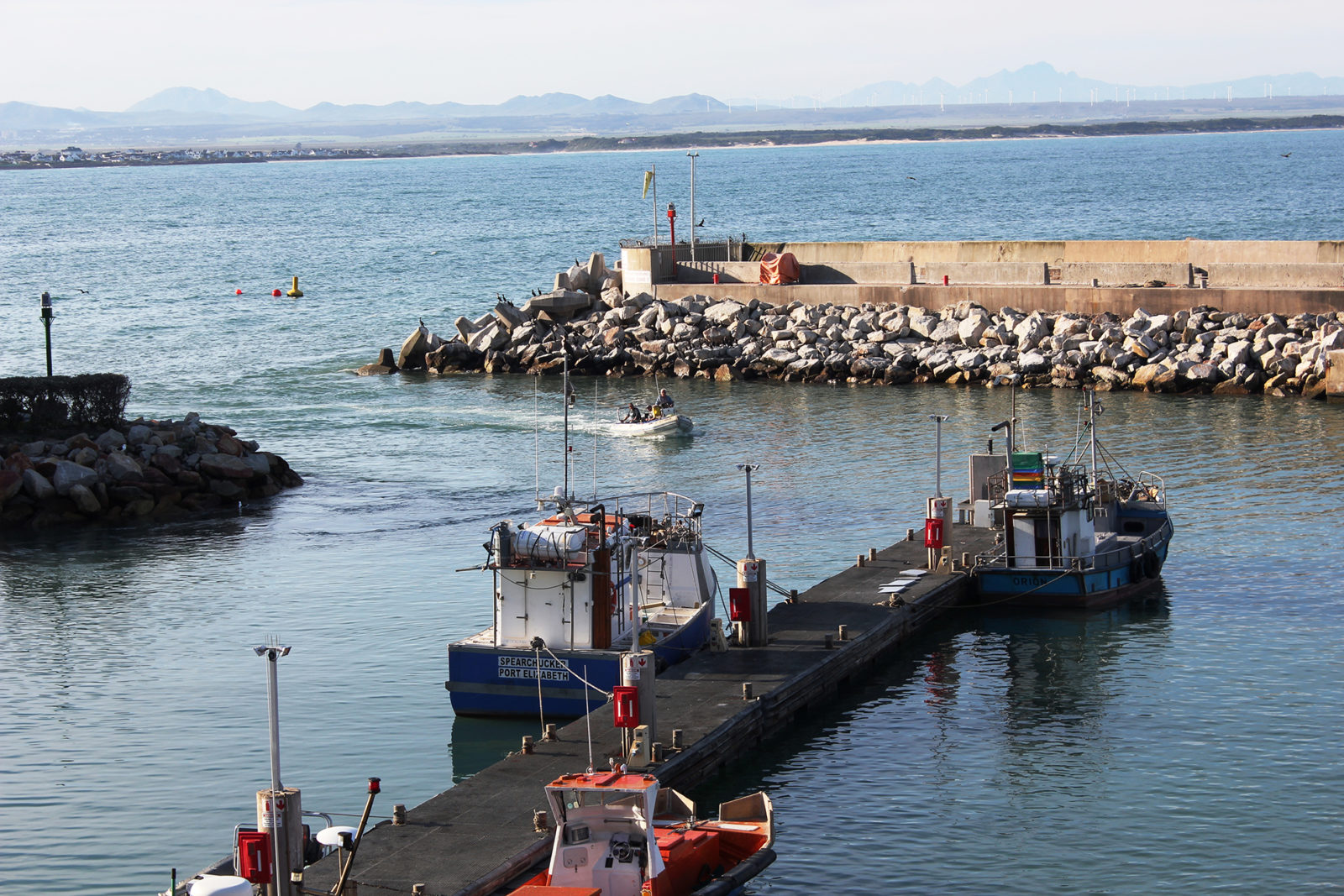 St Francis Bay is one of the tourist meccas of the Eastern Cape but many have not heard of neighbouring Port St Francis just a few minutes away. GORDON WRIGHT visited one of the few privately owned harbours in South Africa and found some world-class calamari in a classic Mom & Pop eatery on the quayside.

So, calamari is calamari, right?

Well, not so much…

The major seafood retailers and restaurant franchises rave about the fabulous Patagonian or the European squid they import but those in the know are acutely aware that this is mostly inferior quality and thus cheap and assume that our South African palates won’t know the difference. Generally, they are correct.

The fact of the matter is that some of the world’s finest squid and calamari come from the good old Eastern Cape, specifically, Port St Francis.

Us Saffers just don’t get to have it because it is highly sought-after and thus mostly exported to Spain and the other Mediterranean countries for top dollar. It’s a personal gripe of mine that we produce some of the best calamari on the planet but seldom get the chance to taste it. A bit like working in the Ferrari factory but never getting a chance to drive one.

So, when taking a recent trip to the area I made a point of looking up my mate Peet Kemp and booking us a lazy Friday afternoon lunch for a catch-up, a glass of wine and a chat about interesting things and matters of a calamari nature.

Now Peet is the unofficial ambassador of the St Francis Bay area and volunteers for everything from the NSRI to the local tourism office, and pertinently, is a major influence in their annual calamari festival. The fact that that he’s also a splendid fellow to lunch with just adds the ice to the proverbial gin, if you get my nautical drift.

When last I saw young Peet, he was constantly prattling on about this little place called Clive’s Chokka Block and how good the food is and, particularly, the fact that they are one of the very few eateries in South Africa that serves local St Francis Bay calamari, so I insisted that he book us a table at Clive’s to see if it lived up to his hype.

Owned by husband and wife team Clive and Sam Canter, the heavily seafood-orientated menu chalked on the specials blackboard above the kitchen has a decidedly Afro/Mediterranean theme.

It’s a classic “Mom & Pop shop” in the best sense, with both of them there most of the time overseeing staff and the kitchen, chatting to customers and dealing with suppliers and stock on the top floor of the aptly named “Squid Centre”, overlooking the bustling harbour of Port St Francis. The aromas that greeted us were already telling tales of the sea.

The blue and white tables, offset by slightly cheesy décor, lends itself to that Mozambique/Portuguese harbour scene, chokka boats bobbing in the harbour along with all the noise and bustle of a working wharfside and Sakkie the resident seal flopping around in the water below, with the seagulls and cormorants. Working harbour meets seaside charm.

It was well after lunch when we arrived, so the kitchen was not too busy. Perfect for a lazy catch-up and a chin wag over a sip or two of wine while sampling the frutti di mare.

Together with a crisp and refreshing Endless Summer (blonde ale) from the nearby Brewhaha JBay brewery to wash the Karoo dust from my parched throat, our main man Dennis and his sidekick Rochelle brought a perfectly chilled bottle of Simonsig Kaapse Vonkel for my better half Rose and Peet, followed swiftly by a spicy brandy flamed chorizo to kick proceedings off.

The blonde ale paired perfectly with the juicy and piquant fermented sausage that is chorizo, with the hint of umami coming through from the brandy flames nicely, while Rose and Peet declared that the spicy smoked paprika flavours and fine bubbles of the vonkel were just a splendid marriage.

A good start then.

For the mains, the amicable and friendly Clive ambled over to offer some advice. I was keen on anything, so long as it involved calamari, and Rose was in much the same mood, but there were so many options to choose from we could not settle on anything specific, so we all decided to pool our resources and order a few different dishes to share. Max, our photographer and tame teenager, is no friend of seafood, so he opted for a classic burger and chips.

Clive chatted to us about the local squid (calamari) industry and how far superior it is to the imported stuff. Sure, it may be a fraction tougher than the enzyme-treated imports but it packs a lot more punch in flavour. He is super knowledgeable and even offers calamari tastings as part of the menu. (Which includes a full demo on cleaning, insights into the industry and various ways to prepare it – nice!).

Possibly inspired by Clive and quite unusually, Rose and I both opted for the classic, lightly battered and fried rings, tentacles and strips with hand-cut chips and a salad while Peet ordered the fresh butterflied panga with lashings of lemon, garlic and butter. Unusually, I say, as we generally like to order different things then swap halfway, cliché I know but always a winner.

I scuttled off to fish a bottle of Cederberg rosé out of the nearby wine fridge (it’s that kind of place) and returned to find Peet in the middle of a full-on lecture on how squid is caught, replete with jigs and hand lines – evidently part of Clive’s tasting arsenal – to an enthralled Rose and Max.

He was also full of interesting information about the little port itself. It is not only home to a large fleet of squid, hake and pilchard vessels but also charter boats, deep-sea fishing boats and yachts from all over the world. The moorings are surrounded by Mediterranean-style penthouses and apartments and tall palm trees that are home to a large flock of lovebirds. Seriously.

Apparently a local resident’s pet lovebirds escaped from their cage a few years ago and did what their name suggests with magnificent success, it would seem. The result is that the port has a resident population of wild lovebirds rivalling that of the seagulls.

The mains arrived just in time to top up our glasses and appreciate the honest simplicity of the dishes. No frills, jus or foams, just good old-fashioned, honest food that makes you think you are on holiday. The calamari was flavoursome, crispy and light and the fries, twice-fried I am sure, crunchy outside and soft and floury inside with a little side salad that doubles as a garnish and a small bowl of tartar sauce. Perfect.

Peet’s fish filled his plate, smothered in buttery, garlicky, lemony bliss with a sprinkling of parsley and a few slices of lemon. Cooked just right, juicy and delicious.

Max’s burger was just as simple, a good size patty, a dash of basting sauce, served on a fresh bun with a layer of sweated onion; pickles, tomato and crispy fresh lettuce finished it off.

Washed down with a glass of the refreshingly dry Cederberg rosé and some Friday afternoon banter, it all made for a most splendid experience.

Now, whenever I look for a classic seafood restaurant, it must have a few basics in order to pass muster in my book. A good sea view, bitterly cold beverages, well-trained and friendly staff and fresh, unpretentious seafood. Give me that and I’ll love it forever. I don’t really care about the décor or the sideshows, or the beautiful people swanning by on the promenade.

What I do care about are the basics. If you get those right you are onto a winner in my book and anything extra is just a bonus.

Clive and Sam have nailed it at their Chokka Block and the little Port of St Francis is so much the better for it. Get there before everyone finds out how great it really is and you can’t get a table. DM