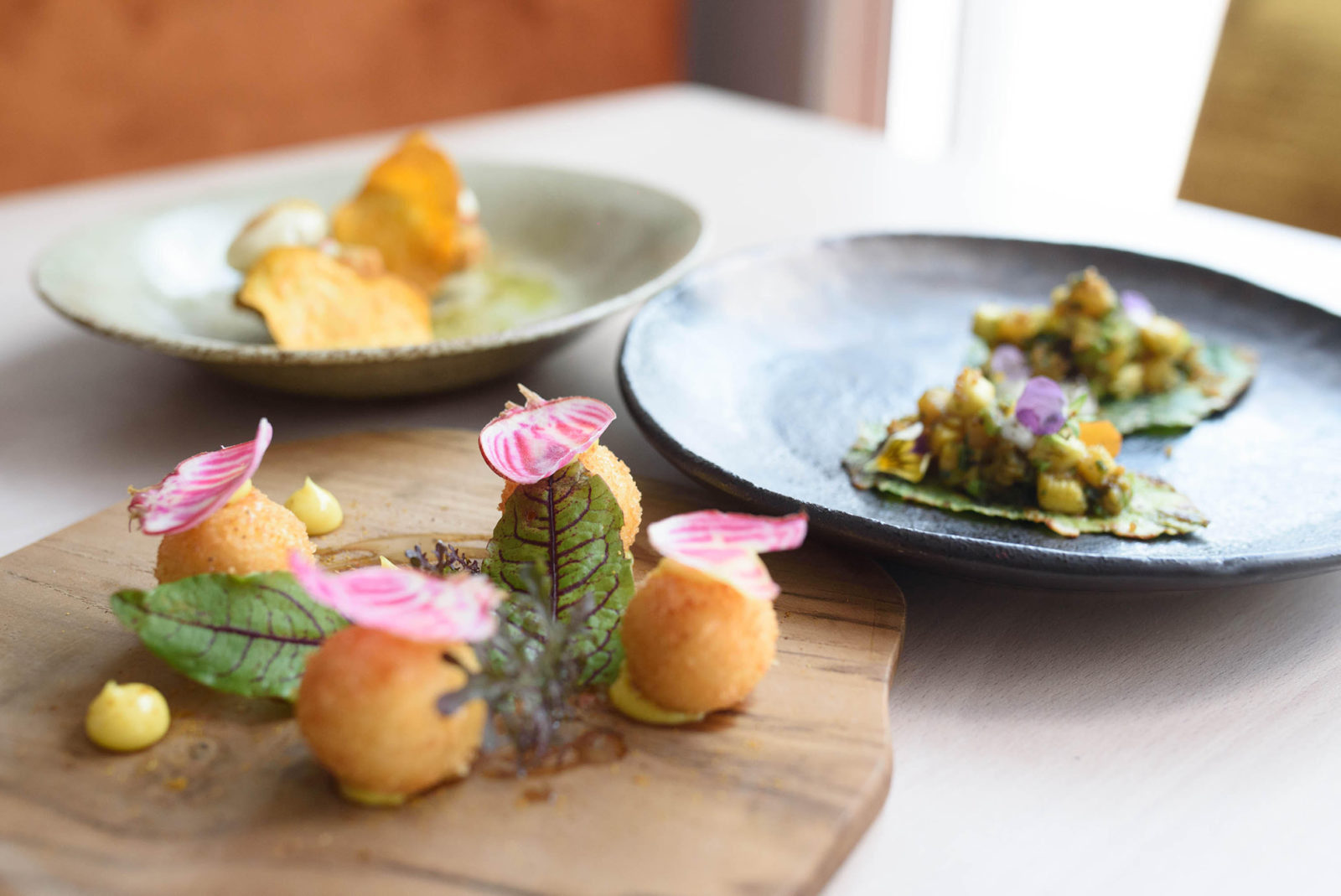 The entire vision behind Andre Hill’s restaurant Upper Bloem is an ode to memory, celebrating his childhood in Bo-Kaap. But his deliberately modern cuisine is far from nostalgic and his vision for the future is razor-sharp.

Remembrance is a fleeting, tenuous thing at best. This ephemeral feeling is so personal and mostly difficult to explain. Nineteenth-century French author Charles Pierre Monselet described it best when he said: “Ponder well on this point: the pleasant hours of our life are all connected by a more or less tangible link, with some memory of the table.”

In the planning stages, Andre felt that it was important for the food and decor at Upper Bloem restaurant to connect, especially when the offering is so particular. From the beginning, the ultimate inspiration for the space was that it needed to be geographically specific even if that flew under the radar. Liam Mooney came on board to bring that vision to life. After a briefing, he walked around Bo-Kaap taking photographs for inspiration. The result is a bright, open-plan restaurant with enough pops of colour to make it Instagram-ready. The colour and texture of the fabrics used on the chairs are based on the classic mustard jackets with blue patch elbows worn by Andre’s grandfather and other gentlemen of his era. The tile pattern on the walls is a direct throwback to shops in the Bo-Kaap, particularly corner shops and their vivid entrances. In this way, the diner is immersed in history.

I ask Andre what his earliest food memory is. He said his mother was a great cook and she took a great amount of pleasure from feeding people so he spent a lot of time in the kitchen with her. However, there was a specific anecdote he wanted to share.

“When I was leaving primary school I really wanted to play rugby but I was quite scrawny. So somehow I got this idea that I was going to make myself scrambled eggs and peanut butter on toast. I was eating 12 of those sandwiches a day. After six months of doing that I picked up 10 kilos so it definitely worked. I eventually made it onto the rugby team and I played a couple of times but not as often as I wanted to initially and then I lost interest.

“When I describe that combination to most people they think that it’s completely weird but if I said I’m going to do a poached egg with peanut foam and toasted brioche it would be well received. So it wasn’t my first food memory but it was definitely something that stood out.”

High school passed without fanfare for Andre, who by his own admission was a terrible student. After a failed stint at studying hotel management through a correspondence course, then six months of languishing at home, a cousin told him of an apprenticeship at the Commodore Hotel kitchen. In return for paying for chef school fees the hotel expected them to work full-time for three years.

“I started in this kitchen and I hated every single minute of it. Firstly, it was a shock to the system that I lost my weekends; instead of hanging out with my friends I would now be at work. The chef was a very old-school German guy who was quite strict and arrogant.

“Fortunately, I realised that I was lucky to have the experience and eventually got into the habit of ignoring the nonsense that he said and extracting knowledge and wisdom from his sayings. I was just grateful that he had given me an opportunity and even today I keep trying to give the same opportunity to young folks.”

After 18 years he has come full circle at the helm of his own restaurant. Henry Vigar of La Mouette is the chef-patron and there is a team in the kitchen where he prides himself on it being a very collaborative space.

There have been a lot of words used to describe the food at Upper Bloem restaurant since it opened, most of them complimentary. One that comes up regularly is the C-word. When I ask Andre about it he bristles. (Editor: It refers to Cape Malay cuisine.)

“There have been a few people who have tried to claim we are uplifting Cape Malay cuisine, which I think is absolute bullshit. The food has always been and is still amazing, all we are doing is interpreting in a different way because we have access to a lot more modern techniques and are able to adapt and play around. But in no way are we uplifting anything because that implies it wasn’t perfect to start with.”

Strong words, but I point out that given his history and the similarities between the food he currently serves and what he grew up eating, why should the label be so contentious? This time his response is a lot more measured.

“There are several reasons for that, firstly because I’m not Muslim. Our kitchen staff is not purely from Cape Town, there’s a couple of guys from Zimbabwe. The whole point is not to be specific to one thing. Yes, it’s called Upper Bloem, yes I did grow up there, but I always wanted it to be open enough so that everyone can contribute. The main point was to be respectful to the community because for me it’s really important. The last thing I want is to be in a position where it looks like we are taking from the community and representing their cuisine as something it is not.”

Asked how he would like to be remembered, Hill said as someone with the conviction to cook food that felt authentic to him, who had hopefully encouraged others to do the same. DM