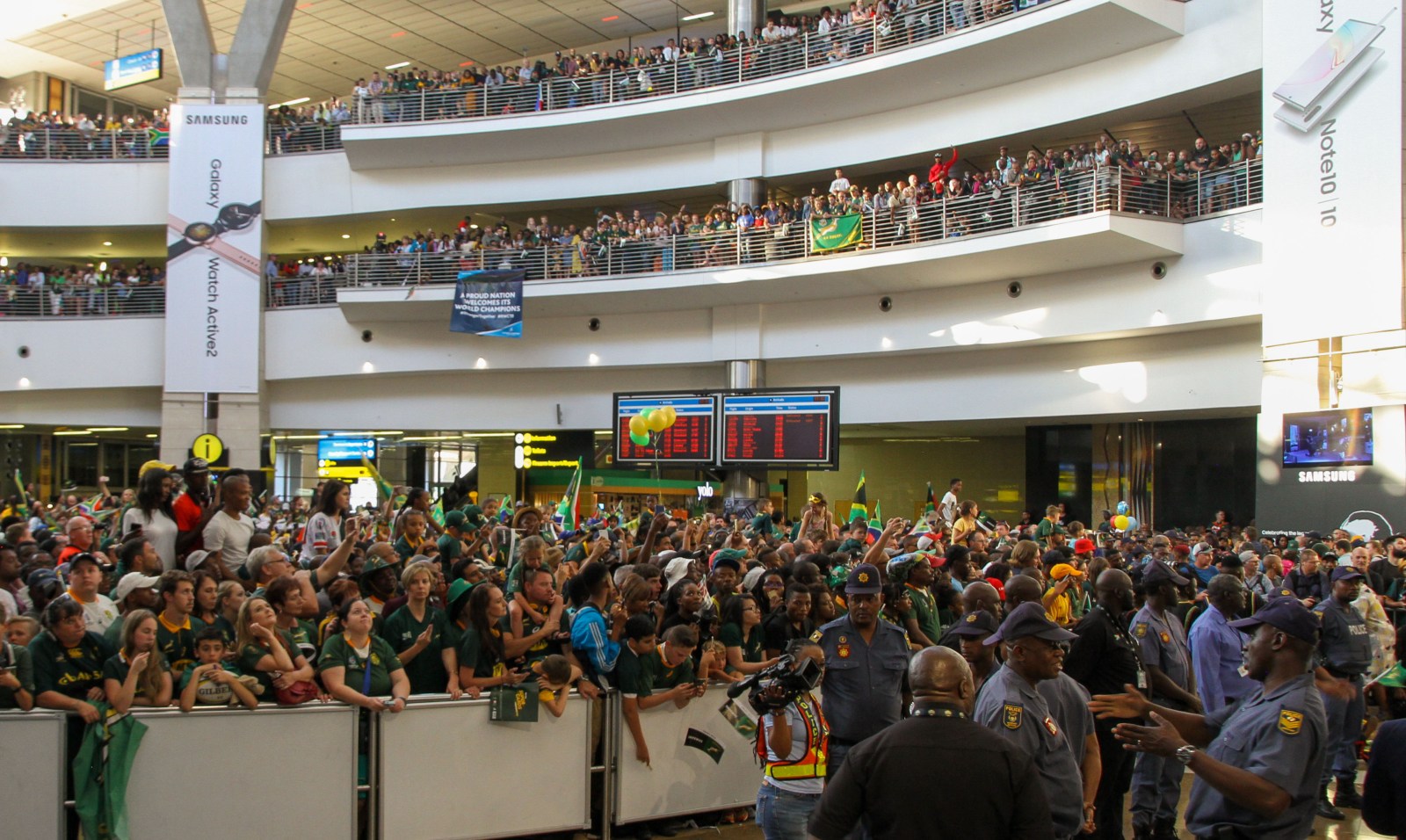 The Springboks arrived back home at OR Tambo International Airport, where hundreds of fans had gathered to welcome them back to the country after their Rugby World Cup triumph in Japan.

The 5th of November 2019 will be etched in history as the day the World Cup-winning Springboks got a hero’s welcome at OR Tambo International Airport from throngs of doting South Africans of all creeds and backgrounds.

It will also be remembered as the day Bok winger Makazole Mapimpi dropped an “F-bomb” on live national television, leaving Minister of Sport, Arts, Culture and Recreation Nathi Mthethwa wishing the earth would swallow him.

However, Mapimpi — already a cult hero for his mesmerising performances at the World Cup, including six tries and becoming the first South African to score a try in a World Cup final — further endeared himself to ordinary South Africans by showing his unfiltered authenticity.

Mapimpi embodies the meaning of his name, which is “let him be humble”. Even after all he has worked for and achieved over the past five or so years, culminating in this glorious moment, he still remains D-Rex from rural Tsholomnqa in the Eastern Cape, the boy who went to Jim Vabaza Senior Secondary School.

He is unpolished, the guy next door, who ordinary South Africans can relate to.

“I remember five years back, I was playing Sunday-league club rugby,” said Mapimpi, speaking of his time playing for the Border Bulldogs.

“There’s no professional league in the rural areas and one of my friends told me, ‘you can make it man’. I told the guy ‘No, bro, no one is watching me. We are too far from the system,’’ said the winger.

The 5th of November was also coach Rassie Erasmus’s birthday. Nothing better than hundreds of jovial South Africans to help make it a memorable birthday for the coach.

Speaking at the press conference at OR Tambo, Erasmus said he hoped this World Cup win would not be in vain when it came to transformation within South African rugby, so that many players such as Mapimpi get the opportunity they deserve.

“Anything can be overcome with opportunity… We obviously don’t want it to be so tough for everybody else and we’re hoping things will get better for everybody else in future. But I mean, if a guy like Mapimpi can come from where he comes from and make it, it just shows that it is possible”.

While the system continues to be reshaped to be more inclusive than it has been over the past decade, a player such as Mapimpi, who has circumvented the system, will continue to inspire those who are in the position he was five years ago — to show them there is more than one path into rugby and that they dare not give up on their dreams.

“It’s a big deal for me, I won’t lie, and it’s a big thing for Eastern Cape people and where I’m from. There are young kids who may have been watching and learnt so much from this win. I couldn’t believe that I could make the Springbok team. It’s a blessing, it’s amazing and I’m happy about that,” said Mapimpi when asked what winning the World Cup meant for him. DM