The MTBPS: Much worse than expected 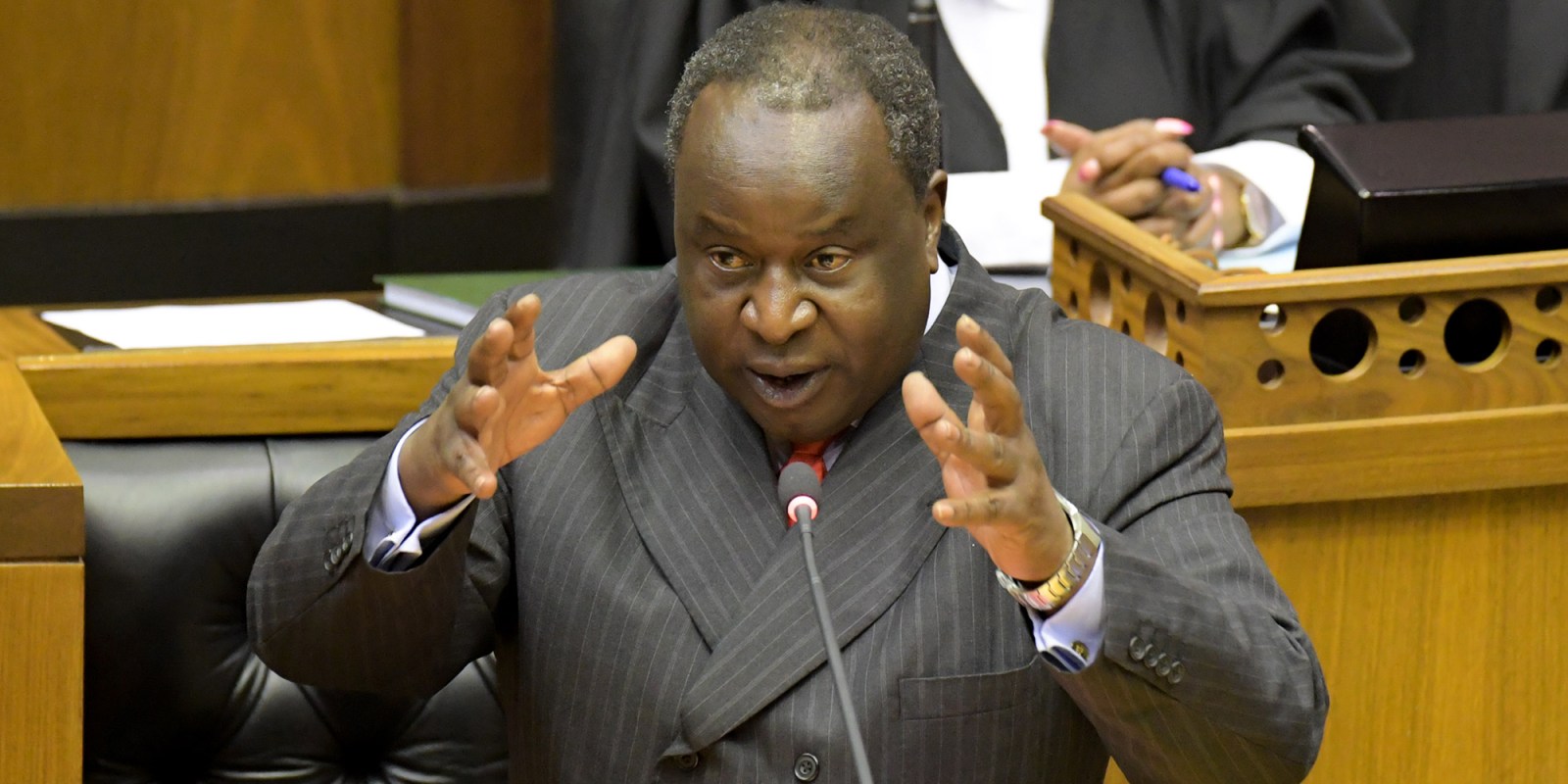 The mini-budget tabled in Parliament last week is a wake-up call. It shows unequivocally that the path South Africa is on is unsustainable: debt is rising, growth is falling, and there is no real plan to get the government’s finances under control. ‘Hope’, as Finance Minister Tito Mboweni said, ‘is not a strategy.’ Until there is one, however, the risks that our public finances pose to the country’s future prosperity are enormous.

By far the most shocking piece of data in the mini-budget tabled by the Minister of Finance shows the extent to which previous estimates of the sustainability of SA’s fiscal policy actually understated the severity of the crisis. Analysts and financial markets were genuinely surprised by the extent to which the Treasury itself now estimates that our fiscal position has deteriorated.

This is reflected in the figure below, which shows the path of debt to GDP projected in February (the red line) and compares it to what Treasury now expects to happen. The first line (published just eight months ago) projects debt stabilising at about 60% of GDP in 2023; the new calculations show: 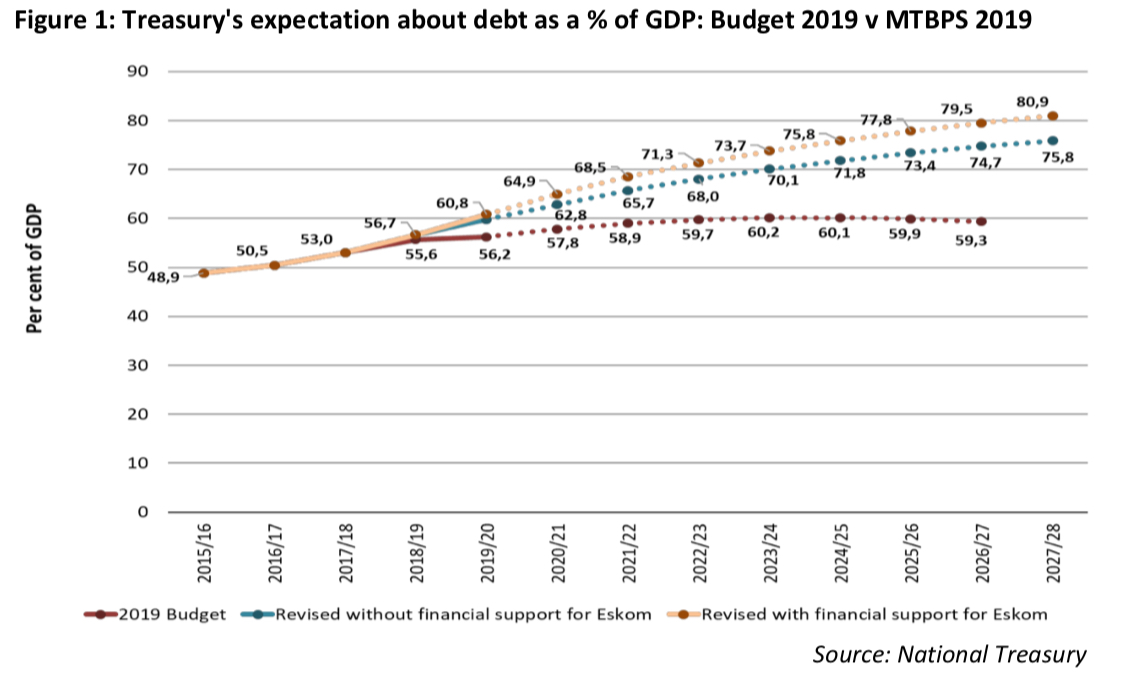 There are four major reasons why the picture seems so much worse now than it did in February 2019:

The size of the anticipated shortfalls in revenue is reflected in a table published in the MTBPS. It shows that Treasury is now expecting to take in a total of more than R250-billion less revenue in this financial year and the next two than it had expected to do in February. This is because revenue buoyancy is expected to be much lower (1.08 in 2019/20 compared to a hoped-for 1.31) and because nominal GDP growth is slower (because expected inflation is falling and the rate of growth is, too). Slower nominal GDP growth explains about 60% of the decline in revenue projections, while lower levels of revenue buoyancy explain the rest.

The impact of the lowering of assumptions about both growth and revenue buoyancy that underpin the fiscal framework has two very significant effects on the ratio of debt to GDP. First, it means that, unless spending is also cut, the decline in revenues must imply larger borrowings. Second, because the economy is growing more slowly, the ratio in relation to GDP of any given amount of debt rises. These two factors are the drivers of the exceptionally rapid increase in the level of debt-to-GDP predicted in the MTBPS relative to what was projected in February. This is critical because it shows – once again – that the road to fiscal sustainability runs through policies that would accelerate economic growth.

This is a point that CDE made in our report on fiscal policy released in August 2019, Running out of Road (see here), even a one-percentage-point a year increase in growth would have profound implications for fiscal sustainability. Using data available then, we showed that if growth had been one percentage point higher than it was in every year after the 2008 global recession, in 2018 SA’s public debt (including the SoCs) would have been 44% of GDP and falling rather than 63% and rising. 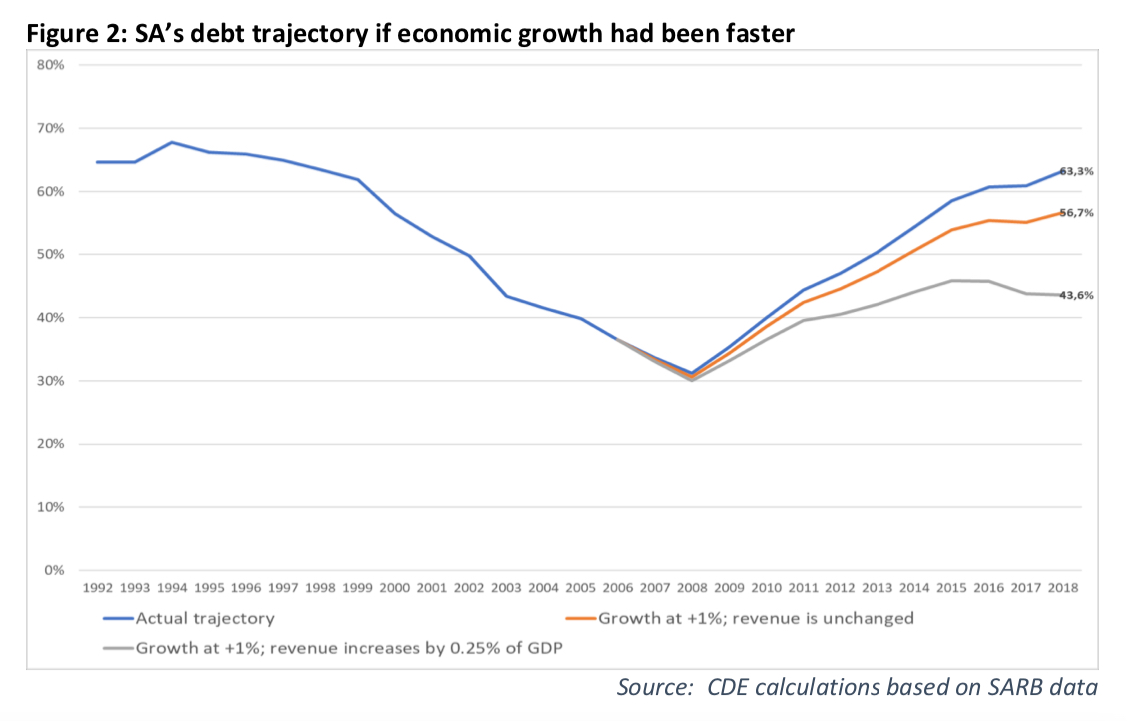 The growth of public spending is not falling

Although it is the slowdown in economic growth together with the even more rapid slowdown in expected tax revenue growth that drives the deterioration of our fiscal position, the absence of meaningful reductions in the rate of growth of public spending also plays a critical role.

As can be seen from the published spending plans, Treasury is currently expecting that spending will grow from R1.8-trillion in 2019/20 to R2.2-trillion in 2022/23, a rate of increase that averages 6.3% a year. This is fairly rapid growth when inflation is expected to be around 4.5% a year and economic growth is below 1 per cent a year (although Treasury expects this to pick up modestly, to 1.7 per cent in 2022/23). This is not a plan for fiscal consolidation led by spending restraint, which is what CDE called for in Running out of Road.

Apart from the relatively rapid rate of spending growth in the aggregate, a couple of other points are worth noting:

Provisions for “payments for financial assets”, which is driven by loans and equity injections into SoCs and has frequently been zero, amount to over R200-billion across the current year and the next three.

The minister of finance has himself described government’s spending plans as unsustainable and expressed the hope/intention to present a budget in February 2020 in which savings totalling R150-billion have been stripped out of these spending guidelines. It is clear, however, that he has not yet been able to secure Cabinet’s full backing for doing this; if he had, he would surely have presented a very different mini-budget.

It cannot be stressed too strongly that unless such cuts can be effected, South Africa’s creditworthiness will plummet further and we will be faced with even higher borrowing costs – both in the public and private sectors. And, as a result of that, we will see even slower economic growth. Thus, even as the road to fiscal sustainability passes through the policy reforms needed to achieve faster growth, the road to faster growth passes through meaningful fiscal consolidation that de-risks the economy and lowers the cost of capital.

While spending growth must be restrained, and some of the burden of this will have to fall on the public sector salary bill, there is very little chance that this can bear the full weight of adjustment. Overly high though it is, we cannot realistically expect public spending to fall very much in the short and even medium terms. This would be hard to achieve in a stable, wealthy democracy; it is impossible in a society shaped overwhelmingly by its inequalities and in which politics are as fraught and dangerous as are ours.

Given this, we absolutely have to see growth-accelerating reforms. Everybody knows this already, what has been lacking is the will to make the decisions that are needed, and which, in the nature of things, will mean that those who benefit from existing policies will have to be confronted. The costs of failing to act are high and mounting. Leadership is required now to define the national interest and implement appropriate reforms.

What kinds of policies do we need to raise our chances of growth?

The government needs to implement these vital reforms and its actions, implementation and communications need to reflect a real sense of urgency.

Given the bleakness of the picture painted by Mr Mboweni last week, the decision by Moody’s to immediately reset the outlook of our sovereign rating to negative was entirely understandable. It is doubtful the minister had any expectation of any other outcome. The critical thing now is to act: everyone knows what has to happen to accelerate fiscal consolidation and improve the growth outlook, but knowing and doing are two different things.

The government must now act. To do otherwise is malpractice and risks condemning the country to declining real per capita incomes and increasing unemployment for a very extended period. No government can survive that for long, so it is in all of our interests that, however hard the political challenges appear, the government tackles them decisively. And soon. BM

Bernstein is the CEO of the Centre for Development and Enterprise. The analysis was produced by the CDE.