The dangerous vacuity of the EFF’s populism and evangelism 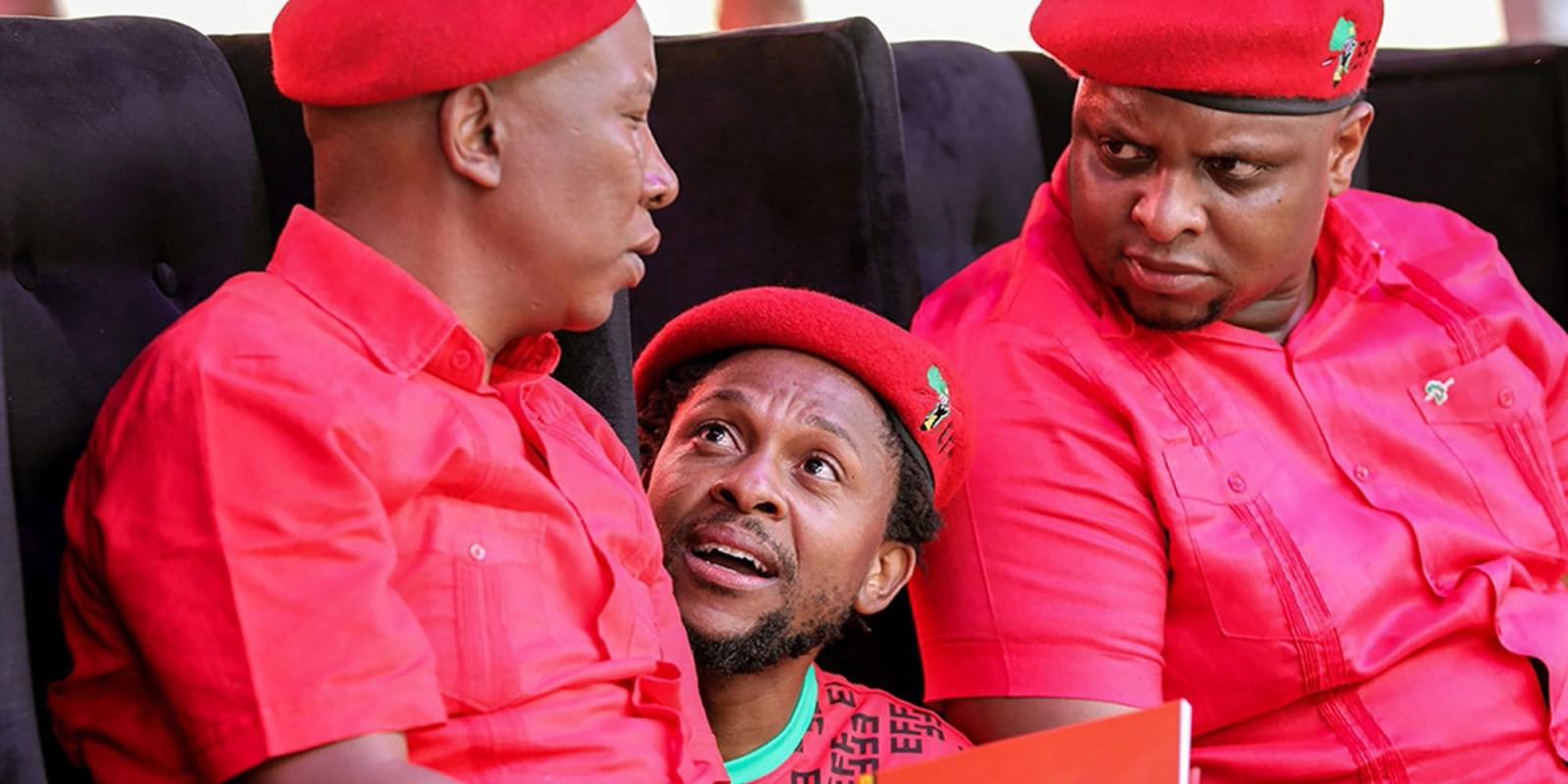 The EFF has taken the noble quest of land reform and turned it into an almost biblical form of revenge. Where the sins of the fathers (those foreign people who occupied land, three centuries ago), should be passed on to current generations. Its evangelical revolutionary zeal, its race-baiting, ersatz African puritanism, and biblical politics of revenge, suggest that the EFF, for now, represents little more than the simulated orgasm of the impotent.

Writing about the EFF is sometimes like writing about haemorrhoids. Haemorrhoids are dreadfully uncomfortable and painful, they’re bloody, messy, itchy… it’s not something you talk about publicly, or write about in the daily press. They are best treated in the privacy of your home. And they come and they go as regularly as, well, haemorrhoids do. So here we are, then, scratching the same itch, over and again, and pretending that we’re adjusting our pants…

The Economic Freedom Fighters (EFF) have the easiest of positions, in terms of policies and politicking, on the spectrum of South Africans politics. It is sometimes comical, sometimes embarrassing, sometimes exasperating, but almost always dangerous. At the best of times, EFF’s particular brand of reasoning — or “superior logic” as its members would refer to it — seems to be quite vacuous. They say what they want, do as they please, and don’t actually seem to care about consequences. They are, sometimes, like that one person in a room who asks a question, and leaves before it is answered. It’s all for effect, you see.

Anyway, a few caveats ought to be inserted here to satisfy the intellectual imaginaries of those who prefer the Ladybird versions of infinitely complicated matters. All political parties or movements would insist that the loose affiliation of independent critics, commentators, analysts and columnists don’t really know what goes on inside such parties or movements. That is probably correct. The above-mentioned should never be inside a political party. As such, the political parties might insist that the loose affiliation invariably get things wrong.

If I may be so bold and speak on behalf of the loose affiliation, that we sometimes get things wrong is not something to be proud of, but it comes with the territory. We speculate, make observations, analyse public statements, draw distinctions between politics and governance, identify contradictions and antinomies, and situate the things that politicians say and do. Sometimes it’s not the facts, such as they may be, but the significance of facts (I shared more specific details of how we worked in a previous column in this space).

It is often, also, about the unintended consequences of actions. It’s not unreasonable to say that everyone ought to take responsibility for the unintended consequences of their actions. For instance, the person who drives while drunk has no intention of killing anyone, but when they do run over someone and the victim dies, the driver has to take responsibility. There are many examples that one can insert here. Let me get on, then, with the topic of the EFF’s brand of politics.

It’s about the lie of the land, non-Africans and talk about revolution

The EFF has taken the noble quest of land reform and turned it into an almost biblical form of revenge. Where the sins of the fathers (those foreign people who occupied land, three centuries ago), should be passed on to current generations. They have also got away with emotive populist rhetoric, and accused land-owners of being “thieves”.

Whatever one may think of “the land belonging to its rightful owners” (indigenous Africans), it is not too far a stretch to say that everyone who owns a piece of land, today, has probably paid for it. So, land reform, restitution and redistribution of land is necessary for historical and political-economic reasons. But the lie of the land is that everyone who owns the land is a thief, is easy to throw about — and it works.

The EFF has also come to represent a particular brand of loathing, one that is hard to pin down, but clearly aimed at “non-Africans” — especially whites. Quintin Ndlozi’s response to one criticism of his recent anti-Springbok tweets, was to directly state that the criticism was written by “a little white boy”.

This crude and public loathing was on display when the EFF’s Ndlozi went to Twitter to praise the Springbok captain Siya Kolisi and denounced the “non-Africans”, whom he linked to British royalty. EFF leader Julius Malema subsequently gave Ndlozi’s tweets his blessing. The party’s Christopher Mpofu echoed Ndlozi’s sentiments. We have, now, two things that seem pretty straightforward. They may be important, in some respects, but terribly tedious for the EFF’s high evangelism. Let us turn, now, to revolution-speak.

The EFF does revolution the way Bono does poverty. It’s all for show. Especially since it is not clear about what happens after it has its revolution. What it does seem to do well, nonetheless, is evangelise about revolution with customary zealotry. In this sense, given its “economic freedom” mantra and race-driven politics, the EFF seems to have abandoned whatever leftism it may claim to represent.

It has become not unlike the mid-20th-century right-wing anti-statists in the US; until, we may assume, it occupies the state itself. For now, its revolutionary zealotry is old-fashioned Marxist-Leninism with selective (and expedient) reading of Frantz Fanon, who actually warned about movements precisely like the EFF.

Contrary to the EFF’s opposition to white people and other “non-Africans” Fanon (in Sociologie d’une revolution) insists on a prominent and progressive role of women in politics (women seem by and large absent from EFF leadership), and a role for the minorities in Algeria — especially the Berber and Jewish minorities. For Berber, in this instance, consider the EFF’s opposition to South Africans of Indian heritage, and for Jewish, consider the EFF’s almost visceral hatred of white people.

Fanon’s nationalism was not ethnicity (nor was it based on senses of African purity), but on loyalty to Algeria, and willingness to accept Algerian identity. Ultimately, the South Africa the EFF envisages is a long way from the post-independence Algeria, which continues to force Jews and Europeans out of the country, by various means of coercion and consent. The Berbers, too, (indigenous like the Khoi or coloured people in South Africa) continue to be silenced (not unlike the way the EFF would insist that non-Africans have no voice in South Africa).

When the Republic of Algeria celebrated its independence in 1962, the newly founded regime singled out the Berbers as an “existential threat to the Arabo-Muslim identity of the country. (See page 103 of Histoire des Berbères: un combat identitaire plurimillénaire). We can read, here — as Fanon presaged — the horror of persecuting outsiders (South African whites or those of Indian heritage) in a state-run by the EFF.

The EFF’s apparently wilful misreading of Fanon suits only its populism and evangelism of “economic freedom” (from its displays of pecuniary excesses, it does seem to enjoy loads of economic freedom). Finally, on Fanon, and especially his brilliant Wretched of the Earth, the book can unproblematically be situated in the Cold War with its crude binaries, and by the creation of the Non-Aligned Movement in 1955. The contention, here, is that the EFF’s evangelical revolutionary zeal, its race-baiting (and ersatz African puritanism), and biblical politics of revenge, suggest that the EFF, for now, represents little more than the simulated orgasm of the impotent. More seriously, when it comes to minorities (“non-Africans”) it is precisely what Fanon warned against. Not unlike its counterparts, it represents the grotesqueries of South Africa.

Again, for now, the EFF knows that it is too small to make any significant national gains. It knows that it is lacking in leadership beyond Malema, Floyd Shivambu, Goodrich Gardee and Christopher Mpofu. It does have at least one adviser or mentor who seems to have forgotten that the world has changed significantly since the end of the Cold War.

It was probably Rene Descartes (I stand to be corrected) who said that it is highly improbable that the truth will be revealed simultaneously to many people. It is more natural that the truth will be grasped only by few. As for its Marxist-Leninism, well, there are very few countries in which loyalty to orthodox communism proved to be a lasting defence against the surge of the right — which is a greater threat to the world, today. Maybe this truth will come to the EFF at some point. DM