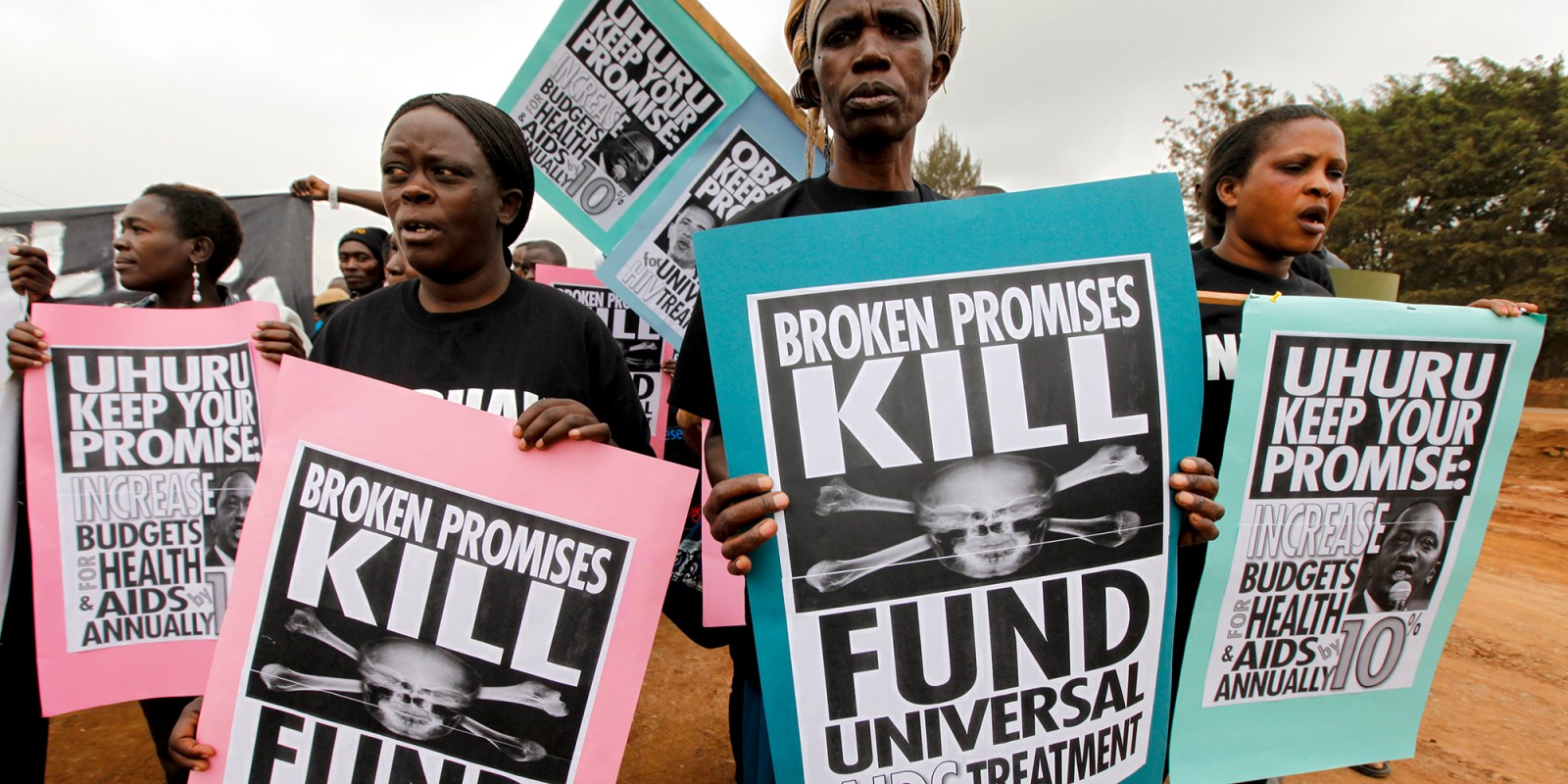 Kenyan activists hold up placards to demand Kenyan Finance Minister Uhuru Kenyatta to keep his promise to fund the fight against HIV as they march to the venue of the Kenya National HIV Conference being held in Nairobi, Kenya, 18 May 2011. EPA/DAI KUROKAWA

I have worked closely with other activists and allies through multiple Country Operational Plan (COP) planning cycles, and the process of completing the most recent COP, for 2019, has been the most turbulent — with the most at stake for communities.

First, Pepfar announced it would seek a massive cut to the Kenya Pepfar programme, from $505-million in 2018 to $350-million for COP19 (the final approved COP19 budget for Kenya increased to $375-million).

Pepfar argued this cut was justified based on poor performance in identifying new people living with HIV, linking and retaining them on treatment and the Kenyan government’s reluctance to share the results of the 2018 Kenya Population-Based HIV Impact Assessment, a national household-based HIV prevalence survey.

Activists are concerned this rapid and rocky shift to Universal Health Coverage of unknown quality and coverage will nevertheless be used by Pepfar as an excuse for further cuts — and withdrawal from service delivery based on political expediency, not evidence.

Then activists released a Kenya People’s COP, describing civil society’s recommendations for Pepfar. These recommendations were based on community-led monitoring of the quality and accessibility of HIV treatment and prevention services, carried out in seven high-burden Pepfar-funded service delivery sites in three counties.

Our monitoring revealed a massively overstretched health system with too few health workers and too little investment in community-owned support services to ensure people with HIV on treatment are retained in care with suppressed viral load. A funding cut directed at direct service delivery support would only throw fuel on the fire.

Recommendations for Pepfar from civil society included: increasing the number of health workers in facilities, increased funding for key population-led groups to reach HIV-positive key population members who are suffering without access to services, access to tenofovir/lamivudine/dolutegravir for all women, expanded point of care testing for early infant diagnosis, community-led models of support for people on HIV treatment including treatment literacy groups, and scaled up access to TB care and prevention.

Communities went above and beyond recommendation-setting efforts in prior years, ensuring the voices of people living with HIV at the grassroots were captured for more targeted recommendations.

While we challenged Pepfar to describe how service delivery would not be harmed by their proposed funding cuts, Pepfar shared little to no information — Kenya’s draft COP was constantly changing. We knew that more than ever civil society’s scrutiny was needed, but we were being kept in the dark.

Civil society was only able to start reviewing the proposed strategy in the much smaller finalisation meetings at Pepfar headquarters in Washington DC. But by then the COP was already largely decided on as the Pepfar teams had been meeting for months. Key population programme funding nearly suffered a $10.5-million cut; the cut was finally reversed and programme funding increased by $2.4-million to $18.4-million after push-back from communities who were likely to end up with no key population services in some counties.

Pepfar’s assumption throughout the COP19 planning process was that Kenya was “overfunded”. On that, we fundamentally disagree. While the Kenya programme has been spending too much on administrative fees charged by large international NGOs and the replacement of costly, poor-performing partners under COP19 is a welcome move, the continued cuts to Kenya’s programme will undermine the ability to correct the performance problems that Pepfar rightly highlighted to begin with.

Furthermore, while Pepfar’s commitment under COP19 to equip local government health programmes to step up their role in the HIV response is an important opportunity for government leadership and accountability, we are concerned it comes alongside Pepfar prematurely and suddenly stepping back from its commitment to support Kenya to reach all people with HIV prevention and treatment.

Instead, funds freed up from wasteful administrative costs should have been channelled toward improving the quality of services and closing coverage gaps — key challenges described in the Kenya People’s COP.

Pepfar’s proposal to cut Kenya’s funding further if it does not achieve COP18 treatment targets, as described in the recently released Approval Memo, is unacceptable. A second round of further cuts will reduce the country’s capacity to deliver quality care for people living with HIV, rather than improve poor performance. People living with HIV who do not yet know their status will be greatly harmed by this decision, including children who are unable to advocate for themselves, key populations who do not use facilities due to stigma and men who are living with HIV. The programme needs to increase resources to be channelled to finding these populations or risk a resurgence of infection.

Ensuring that people in care remain in care will require increased investment in community support to ensure that people living with HIV feel supported enough to remain on treatment. This support will have to go beyond adherence support that is offered at the overstretched clinics. Reducing support now will reverse the success of the programme and be more costly for the future programme.

As the programme begins to implement COP19 we call for Pepfar to reverse the approval memo’s recommendation to decrease COP19 funding further. This will jeopardise the country’s ability to reach out to people who have slipped through the cracks of the HIV response. Instead, the programme needs to channel funds to improving outreach to hard-to-reach communities such as men, invest in quality diagnosis for paediatric care that allows the programme to offer children quality services such as same-day initiation and to invest in a community-based system that allows people living with HIV who are afraid to be tested, an easy opportunity for testing.

Kenya’s COP19 is deeply imperfect. We also know it could have been much worse — and that $2.4-million funding increase for key population programmes came thanks to advocacy and watchdogging.

We know what we must do — we will not be deterred by these setbacks. Instead, we will be closely tracking COP19 implementation and will raise the alarm if and when Pepfar’s ill-advised funding cut negatively affects HIV-positive people. MC