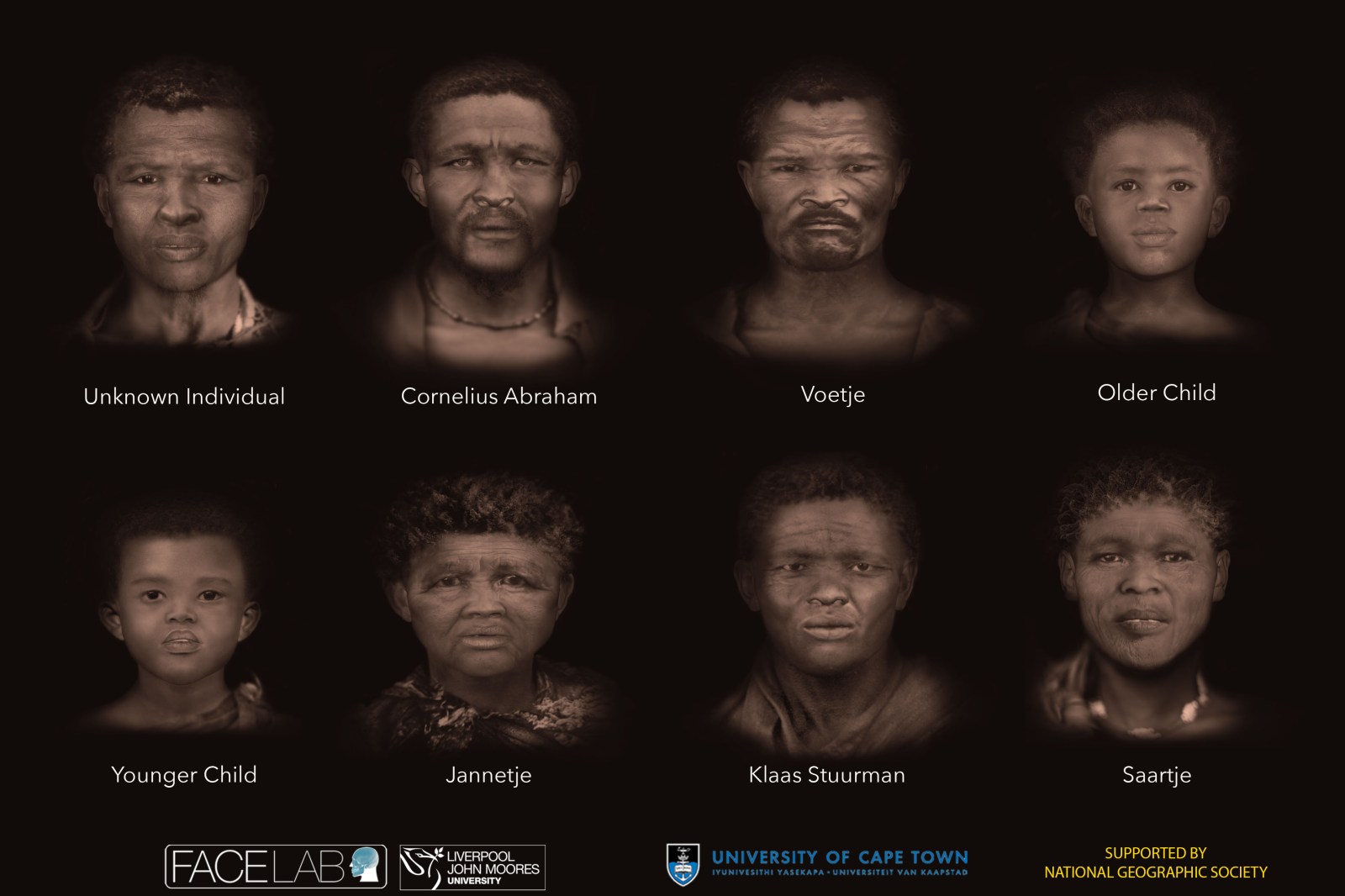 Facial reconstructions of eight of the nine individuals unethically removed from Kruisrivier farm in Sutherland in the 1920s. No skull could be located for the ninth individual. (Photo: UCT) No editing or cropping allowed

In 2017 the University of Cape Town’s curator of human remains, Dr Victoria Gibbons, conducted an archiving audit of UCT’s skeleton collection. The curator identified 11 human remains that, according to the university, were “obtained unethically”.

Nine of the remains were taken from Sutherland in the Northern Cape by a farmer’s son and medical student named Carel Coetzee. Between 1925 and 1931, Coetzee donated the skeletons to UCT after removing them from his family farm in Kruisrivier.

According to Gibbons, the fact that Coetzee knew the deceased before donating their remains and that their remains were taken from his farm made their donation an unethical one.

“We actually created criteria for our university that define what is and what isn’t unethical, and we asked, would we accept it today? And it was with that lens that we went through the collection and discovered these individuals,” Gibbons told Daily Maverick.

When the skeletons were donated, UCT was provided with names and personal information of some of the remains. The nine were revealed as:

Both the Abraham and Stuurman families have descendants who still live in Sutherland, and who have been searching for answers to questions about their family history for decades.

Anthony Mietas, a descendent of Klaas Stuurman, acts as a representative and spokesperson for both families. Mietas said the decision to reveal the two family’s history to the world was so that “broader South Africa will have access to information about who these people were”.

The area surrounding the farm was one of severe conflict between indigenous Khoisan people and settler colonialists, according to UCT historian Nigel Penn. Many indigenous people were subjugated and kept as labourers on colonial farms.

According to Gibbons, the seven adults showed signs of heavy lifting and physical labour, indicative of the lived experiences of Khoe and San people at the time. (Mitochondrial DNA confirmed all of the individuals were either of Khoe or San heritage).

But the scientific team were able to prove that the group managed to maintain some of their culture, tradition and heritage in the face of colonial cruelty. Some of the graves showed evidence of traditional Khoisan burials underneath the Christian gravesites, while skeletal evidence indicates culturally significant sitting positions.

According to Mietas, knowing that his ancestors kept their culture alive made the families tremendously proud.

“To think that through all that difficulty they kept to their beliefs and their belief system, I can only imagine how strong of character they must have been, in the face of adversity they stood up. And that’s a lesson that we can’t take for granted as a family,” Mietas told Daily Maverick.

Mietas and both families are happy with the way the process was conducted. Although the bodies were removed in the name of science, science has also been able to give them their lives back and provide their families and descendants with answers.

Chief Aùtshumao! of the Aboriginal/Xarra Restorative Justice Forum described the restorative process as “spiritual”, while the forum’s chair, Tauriq Jenkins, told Daily Maverick that science and tradition need to align in order for restorative justice to take place.

“I think it’s important that the restorative justice process isn’t just reliant on scientists, that part of the process be open to traditional and indigenous people. Particularly in this regard, that the sacred remains reburial process is sensitive of traditional protocols,” said Jenkins.

The remains will not be reburied on the farm where they were originally laid to rest, but instead will be placed in the Sutherland municipal cemetery. This decision was made by the families to ensure that they would have access to the burial sites and would be close to their relatives.

“We can finally bring the family home for reburial,” said Anna de Wee. A descendant of Cornelius Abraham, 77-year-old De Wee started working as a child labourer on a farm near the Kruisrivier farm at the age of eight. She knows intimately how far from town the farm is, and does not want to have to trek all the way to Kruisrivier to see her relative.

The reburial date is scheduled for early 2020. DM