Pollard, the Quiet Hero of the Bok campaign 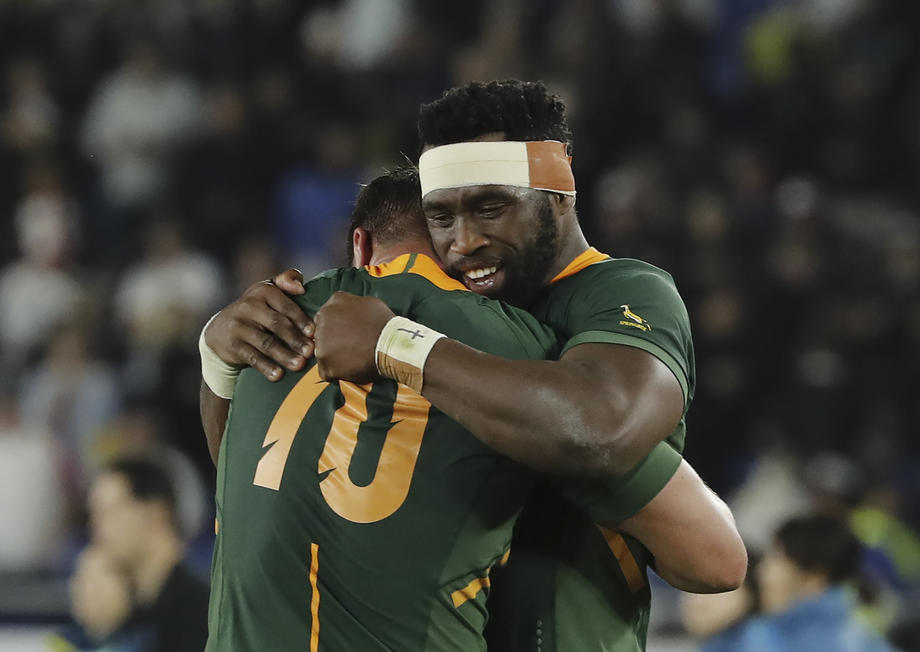 As Siya Kolisi lifted the Webb Ellis Cup in the Yokohama International Stadium on Saturday, and his teammates and management staff celebrated wildly with the skipper, one man stood towards the back of the pack, wearing a satisfied smile.

Flyhalf Handré Pollard wasn’t front and centre of the celebrations, which was fitting because he wasn’t at the forefront of most minds in the immediate aftermath off victory.

But in a quietly vital way, Pollard was central to the Boks’ Rugby World Cup 2019 success, not only with 22 points in the final, but with his contributions throughout the campaign.

At 25, Pollard could lead the Boks’ line for the next four years. He is only reaching his peak, having started his Test career as a 20-year-old in 2014.

After two seasons of injuries that were life-changing in every way, Pollard delivered in the biggest stage in Japan to fulfil his undoubted potential, which saw him voted World Junior Player of the Year in 2014.

He top scored at RWC 2019 with 69 points, landing 16 penalties in the process. He is South Africa’s all-time leading RWC scorer with 162 points in 13 matches.

Crucially, in the semi-final and final in Japan, he landed 13 of 15 kicks at goal, notching up 36 points in the two biggest matches of the tournament. Under the most pressure, Pollard delivered.

But it wasn’t only his kicking that impressed. Pollard’s rock solid defence at flyhalf and his ability to carry into contact and attack the gainline were also crucial. At nearly 100kg he is a big unit in a busy channel and Boks only conceded three tries in the four games he started.

It was his goal-kicking, however, which was decisive. In the semi-final against Wales, Pollard’s match-winning kick was only seven metres in from the touchline with fewer than five minutes to play. The ball bisected the crossbar and gave the Boks a 19-16 lead. It rivalled any kick in RWC history because of its importance in the context of the match situation.

The only two kicks Pollard missed in the last two weeks of the tournament were a relatively easy first kick in the first minute of the final. Nerves, briefly, had the better of him as the Boks won a penalty inside 30 seconds from the kick-off. Pollard hadn’t even had time to settle down and he sliced the kick.

The other kick he missed was in the second half when he attempted a penalty from 59 metres. It was always out of his range, but the plan was to keep England pinned back. Overall Pollard kicked eight out of 10 in the final.

Before the final, Pollard oozed confidence as he spoke to the media. His remarks were a premonition of what was to come.

“I love the pressure,” Pollard said on the eve of the final. “That’s why you train, that’s why you put in the hours.

“If you imagine being a little boy in the backyard, thinking to yourself, ‘this kick is in the World Cup final’ and all those scenarios. You’ve basically been preparing your whole life for it. There is going to be pressure, it’s going to be tough. But you’ve got to embrace it, you’ve got to enjoy it.”

Which is exactly what Pollard and the rest of his team did. England were the side that wilted in the searing mental battle of the final.

That Pollard was on the field at all in Yokohama was impressive because the four years between RWC 2015 and Japan 2019 were filled with tribulations. Injuries and illness nearly ended his career before it had even taken flight.

“Immediately after Rugby World Cup 2015 in England, I suffered a shoulder injury playing in Japan,” Pollard told me in an interview in 2018. “I came back to South Africa where I managed the problem without surgery until the new Super Rugby season started.

“But in pre-season training (at the Bulls in 2016) I suffered a massive knee injury. It was a freak accident. I planted my right foot in the wrong position attempting to make a pass and my anterior cruciate ligament snapped.

“Straight away I knew that the injury was serious and that my knee was ‘gone’. Of course, I hoped for the best, but deep down I knew.

“It was a result of poor passing technique. If your foot is in the wrong position and there is enough weight and momentum coming through the leg, your knee is going to ‘go’.

“I decided to have an operation on my right shoulder (which had been injured previously) soon after the knee, seeing as I was out for months anyway. But I contracted a bug in the hospital and the shoulder became infected. Then came the real complications, which made me really think about life.

“It got to the point where the doctors raised the subject of amputating my arm, although it wasn’t an immediate option. I spent six weeks in hospital, pumped full of antibiotics about seven hours a day.

“It was frightening of course, and during those long days and nights in hospital I just kept telling myself that if I got through this and back on the rugby field, I would make sure I enjoy every single moment.

“I’m philosophical though. The surgeon’s knife is a part of the game, which is all the more reason to also enjoy every moment of your rugby, because it could be taken away instantly.”

Another massive ankle injury followed in 2017, keeping him out of Super Rugby again. By the end of the year he made his comeback to the Bok team against Ireland in Dublin, two years after playing against the All Blacks in the RWC 2015 semi-final.

In some ways Pollard’s injuries were fortunate in that he hardly featured in one of the worst periods in Springbok history. In 2016 and 2017, under coach Allister Coetzee, the Boks won just 11 of 25 Tests and suffered record defeats against New Zealand (57-0) and Ireland (38-3). Pollard missed 21 of those Tests.

He only featured in the final four Tests of that era, which included his comeback on that fateful day against Ireland in Dublin. He came off the bench in that match but then started the next three, with the Boks beating France and Italy but losing to Wales.

From then on he cemented his place as first choice flyhalf and was a critical piece of Rassie Erasmus’ Bok puzzle.

With a game plan built on forward dominance, the Boks needed a general to put points on the board once the damage was done by the pack.

Pollard quietly and efficiently did his part to etch his name into history alongside some of the great flyhalves the game has produced. DM