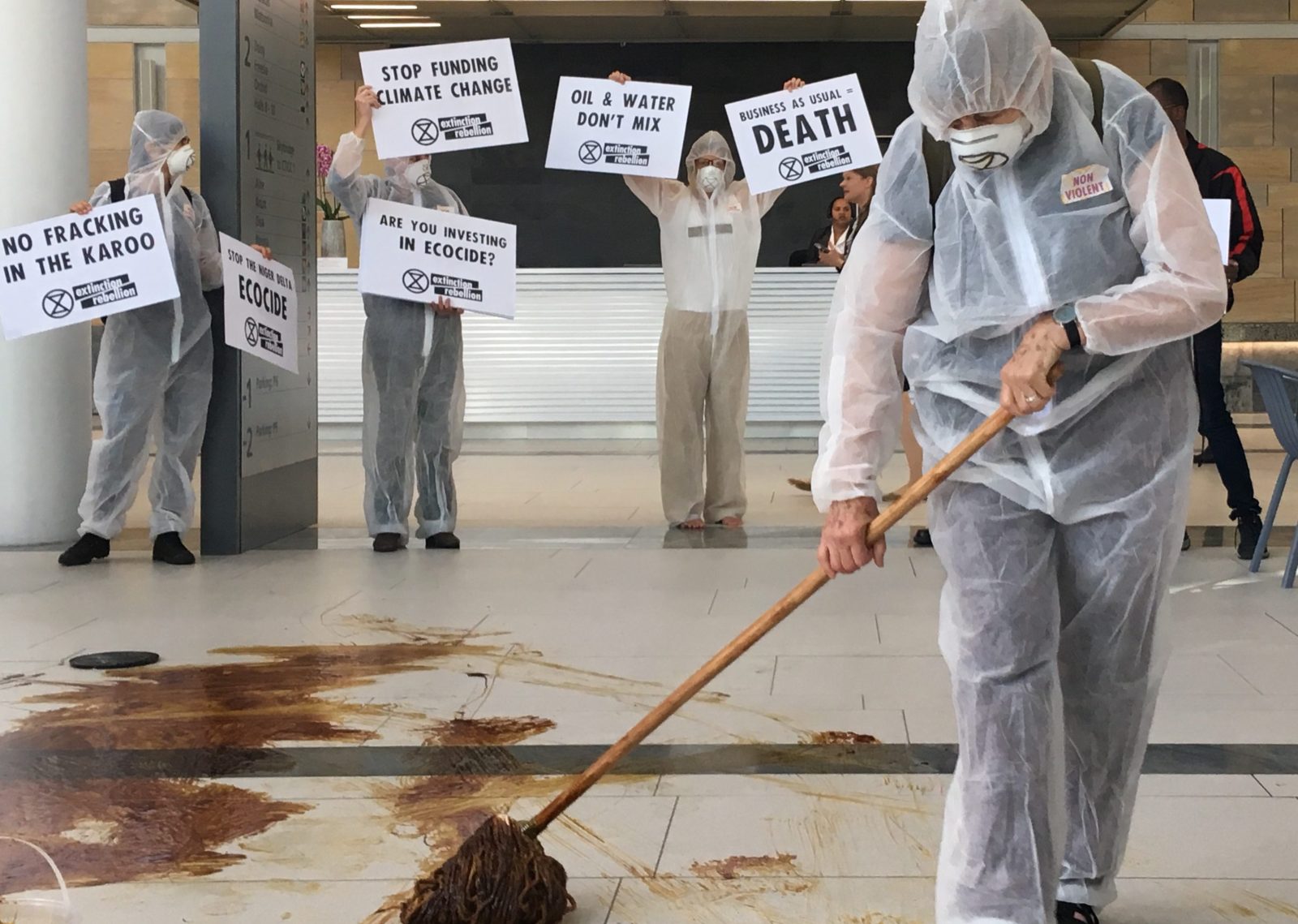 Demonstrators outside the Africa Oil Week conference in Cape Town covered the floor with molasses in a symbolic protest against fossil fuel use. The group belongs to a social movement called Extinction Rebellion, which has organised a wave of strikes and marches across the globe. Its key demand: end fossil fuel use, now.

Africa Oil Week is one of the largest conferences of its kind on the African continent, drawing energy ministers from Ethiopia, Ghana, Senegal, and elsewhere. Oil executives come from afar to make deals and discover new drilling opportunities.

A small group of activists linked to the Extinction Rebellion social movement protested inside the Cape Town Convention Centre from about 8.15am as the conference began with the opening address by  Energy and Mineral Resources Minister Gwede Mantashe.

“We’re here to stop this exploitation of Africa and the African people,” explained one of the protesters, a silver-haired man named Sven. “There are a lot of ministers, African officials, and people from BP and Shell trying to get exploration rights. This is a good opportunity to show a bit of force, to show that we’re not going to sit down.”

Why spread molasses? According to demonstrator Peter Benjamin, it represents the oil being drawn from the continent’s reserves – and it’s biodegradable.

Protestor Tinashe Njanji works for an organisation called the People’s Health Movement of South Africa, which tries to address the social determinants of health, including fossil fuel use.

“We’ve seen the issues – the rise of non-communicable diseases, the cancers, all of these diseases which are being caused by fossil fuels,” Njanji said. “Protests like this, they send a clear message to the delegates and policymakers. They see that people are angry, are not happy with their plans on oil and continuing to profit from it.”

Extinction Rebellion chanted slogans on the conference floor while delegates watched from the balconies. Later, they were asked by security to leave.

In 2018, the World Health Organisation declared that climate change represents the greatest threat to global health in the 21st century.

Articles on the conference website describe new forays into fossil fuel production in Nigeria, Ghana, and Senegal. Earlier in 2018, American energy company Anadarko Petroleum kicked off a R300-billion fossil fuel project in Mozambique – the biggest such project ever approved in Africa.

One press release from the conference notes that “the summit comes at a turning point for South Africa in its energy journey. In the wake of Total’s first significant deepwater oil find in the country earlier this year, politicians are preparing for further oil and gas investment.”

Police and protesters are still in talks over whether charges will be levied against this morning’s demonstrators. If the government does decide to prosecute, it will probably be for trespassing and malicious injury to property. DM