Turn that mic off! A brief history of the political gaffe 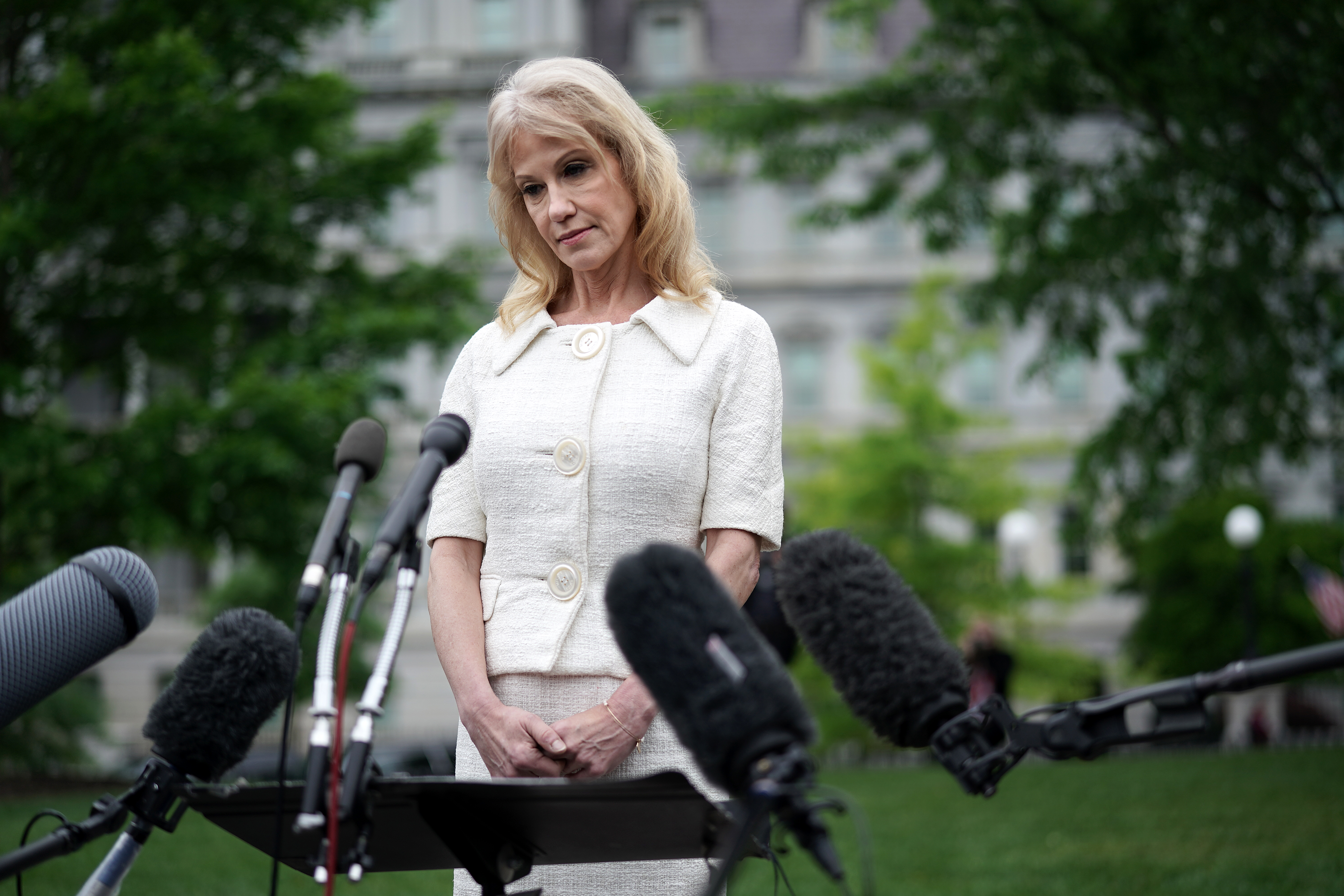 WASHINGTON, DC - MAY 01: Counselor to President Donald Trump, Kellyanne Conway talks to reporters outside the White House May 01, 2019 in Washington, DC. Conway was interviewed at the same time that U.S. Attorney General William Barr was testifying before the Senate Judiciary Committee about special counsel Robert Muller's report. (Photo by Chip Somodevilla/Getty Images)

Where does the gaffe, that awkward and embarrassing misstep caught on camera or on microphone, come from? We investigate.

On 21 October, former speaker of the National Assembly Baleka Mbete appeared on Al Jazeera’s Head to Head, presented by Mehdi Hasan. Business Day’s Jonny Steinberg, who was in the audience, wrote about the event:

“It was a dismal experience, leaving me and many others depressed, listless and bad-tempered. It is not that Mbete’s performance was shockingly bad. Something more epic than mere incompetence was on display. It was as if the sheer rottenness of what happened under Jacob Zuma spilled from the stage.”

Stupid – and hurtful – things politicians say when they go off-script (sometimes firing blunt truths in the process) is nothing new and definitely not specific to South Africa, but as Jennifer Rubin writes in the Washington Post:

“We may be in a post-gaffe era. We’ve regrettably gotten used to the president saying ridiculous, cruel and racist things. The country largely tunes him out, as he has defined political rhetoric down. Perhaps voters just don’t pay attention to stupid things politicians say as much as they used to, or maybe there is so much news that a gaffe is old news before most people have heard of it”.

And indeed, thanks to US President Donald J Trump, the gaffe – that very uncomfortable “oops” moment that should have stayed in obscurity but instead explodes under the spotlight like the DA upon Helen Zille’s return – might soon be an obsolete concept.

The word gaffe comes from the French, and more precisely the Provençal, “gaf”, a word used to label a sort of boathook. Although it is unclear how it became the defining term for a total political blunder, it has been used as such for at least the last century. A Google Ngram Viewer graph (a program that can chart the frequencies of any single word or sentence “with the text within the selected corpus”) shows that the word “gaffe” has made increasing appearances since the 1920s, and has been flying high in our vocabulary since 1992.

In 2017, the Merriam-Webster dictionary even named “gaffe” as one of its Words of the Year. It made the top 10, along with the word “feminism”, which first spiked following the #Metoo movement and later, when, as per the Merriam-Webster, Kellyanne Conway proclaimed during an interview that “she didn’t consider herself a feminist”.

Also one of 2017’s Words of the Year was “complicit”, this time again listed because of someone’s gaffe. Asked in April of that year by CBS News’s Gayle King about “whether she and her husband were ‘complicit’ in what was going on in the White House”, a dumbfounded Ivanka Trump responded: “[I] don’t know what it means to be ‘complicit.’”

A gaffe is often accidental and comes up when no one – especially those who have worked hard behind the scenes at scripting a whole tight scenario – expects it.

Think La La Land, called on stage as the winner of the 2017 Best Picture Academy Award when, in fact, the real winner – announced a few minutes later – was Moonlight.

Sometimes a gaffe can be a glimpse into what politicians really think, like, when back in 2013, former president Zuma said: “We can’t think like Africans in Africa generally. It is not some national road in Malawi.” Or when current Trump attorney Rudy Giuliani proclaimed on NBC’s Meet the Press, “Truth isn’t truth”.

In the universal world of bloopers, gaffes are not all the same; an article written by Dan Amira and published in The Intelligencer, dubbed “Taxonomy of Gaffes”, discerns six types of gaffes, including the Kinsley Gaffe, the Undisciplined Surrogate Gaffe and the Microphone Gaffe.

The Kinsley Gaffe, which is named after US journalist Michael Kinsley (who was the first to draw attention to it) is when the gaffe gives up the truth, like when acting chief of staff Mick Mulvaney said, when asked by ABC’s Jonathan Karl if Trump’s actions over Ukraine amounted to quid pro quo: “I have news for everybody: Get over it, there’s going to be political influence in foreign policy.”

There is also the former governor of Alaska, Sarah Palin, who, in 2010, when asked in a radio interview how she would handle tensions between the two Koreas,  said, “But obviously, we’ve got to stand with our North Korean allies.”

The Microphone Gaffe, as its name suggests, happens when a microphone should be off but isn’t, and the person miked makes inappropriate comments thinking no one hears except for the ones nearby. Trump gave us a taste of the “hot mic gaffe”’ when, in September 2005, during the preparation for of an Access Hollywood episode, he said, “When you’re a star, they let you do it. You can do anything… grab them by the pussy,” something that was then dubbed, “the locker room talk.”

There have been many more gaffes made by politicians and celebrities around the world, but very few were as damaging as the one uttered by US President Gerald Ford in October 1976, during a debate with Jimmy Carter.

Facing the camera, he confidently said: “There is no Soviet domination of Eastern Europe”, to which the New York Times’ Max Frankel responded: “I’m sorry, what?… Did I understand you to say, sir, that the Russians are not using Eastern Europe as their own sphere of influence in occupying most of the countries there and making sure with their troops that it’s a communist zone?” It cost Ford the presidency.

More recently, former VP and 2020 presidential candidate Joe Biden, jokingly self-proclaimed himself a “gaffe machine”. Biden once told a paralysed man in a wheelchair to “Stand up, Chuck”, and described Obama as “the first mainstream African-American who is articulate and bright and clean”. These gaffes, just two among many others, might also cost him a seat at the democratic table.

In March, DA (former) leader Mmusi Maimane told the Tembisa community on the East Rand, “44 out of 10 South Africans don’t have a job”, while in September, Minister of Mineral Resources and Energy Gwede Mantashe promoted “hazenile” at the annual Mining Down Under conference in Perth, Australia. Hazenile, he said, was a fabulous mineral discovered in the “Congo Caves”. Except Hazenile was someone’s April Fool’s joke and does not exist in real life. ML