Accolades keep coming for Boks after their World Cup victory 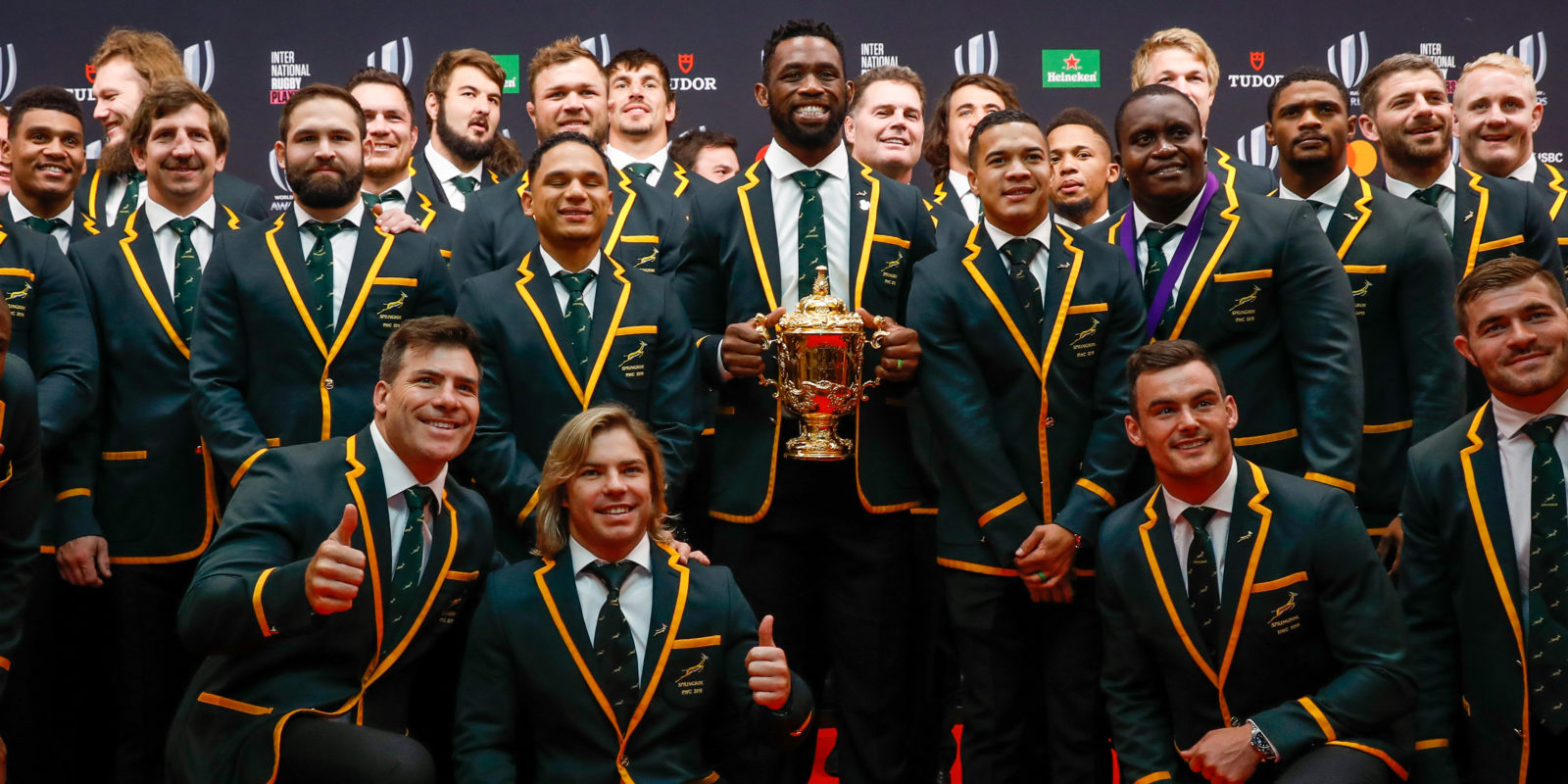 Springbok captain Siya Kolisi shows the Webb Ellis Cup as the champion team poses for a photo on their arrival on 3 November 2019 for the World Rugby Awards in Tokyo, Japan. (Photo: EPA-EFE / Mark R. Cristino)

South Africa continued their winning streak as they picked up three big gongs at the World Rugby Awards in Japan, just over 24 hours after lifting the Webb Ellis Cup.

The South African senior men’s rugby team capped a brilliant year, in which they became the first team to win the Rugby Championship and the Rugby World Cup, by scooping up three major prizes at the World Rugby Awards.

The Springboks were victorious in three of the five categories in which they were nominated, scooping Team of the Year, Coach of the Year as well as having the Player of the Year award: flanker Pieter-Steph du Toit.

“It (their period of transition) was very tough. We got some big scores against us. You’d go to the stadium and it’d be quite empty, something we’re not used to in South Africa. Then we got coach Rassie [Erasmus] who came in with his coaching staff, and we all just bought into his plan.”

The rest is history as they say.

The story of the rise of the Springboks is not too dissimilar to that of Du Toit.

When Erasmus took over as director of rugby in 2018, South African rugby was going through an identity crisis. They had just come off a difficult World Cup campaign in 2015, where despite finishing third, they had suffered an embarrassing loss to a rising Japan.

Heyneke Meyer, who was coach at the time, stepped down shortly after that World Cup and was replaced by Allister Coetzee.

The Boks continued to toil under Coetzee, and after a miserable run of 12 losses from 25 games over two seasons, he was relieved of his duties at the beginning of 2018.

Up stepped Erasmus, doubling up as director of rugby and head coach.

The team will also finish the year at number one in the world rankings for the first time since 2009. Statistically, this is the most successful Springbok season since 1998 when the team was in the middle of a 17-match winning streak.

Du Toit, too, has faced struggles over the past few years, only to rise like a phoenix akin to the Boks.

Early in his career, he struggled with niggling injuries. And just like the Springboks, he had a forgettable 2015.

Just a few months before the 2015 World Cup campaign, Du Toit suffered one of the most serious misfortunes an athlete can have — an anterior cruciate ligament injury, putting the young lock’s aspirations of playing for his country in rugby’s biggest showpiece in jeopardy.

But a ground-breaking surgery enabled him to go to England in 2015. His father donated the tendons his son needed to have any hope of making it to the World Cup. And so it was that Du Toit recovered to make Meyer’s squad.

Meyer decided he would play Du Toit in a new position — blindside flank.

As it happened Du Toit’s debut game as flanker was the match in which South Africa suffered their most embarrassing loss, that defeat at the hands of Japan. Meyer was vilified for his experiment, and so too Du Toit for his performance.

During his tenure, Coetzee also tried to play Du Toit on the flank. Again, the Stormers man struggled in his adopted position. And by this time it looked as if the experiment had failed dismally.

However, under Erasmus, Du Toit has gone about establishing himself as one of the world’s best flankers. One of his highlights leading up to the World Cup was a blinder of performance as South Africa broke a nine-year hoodoo against New Zealand on their home turf at the back end of 2018.

And as of 3 November 2019, Du Toit has shrugged off all the challenges he faced to move to the top of the world, not just as the world’s best flanker, but the world’s best player. He beat competition from countryman Cheslin Kolbe, Tom Curry (England), Alun Wyn Jones (Wales), Ardie Savea (New Zealand) and Joe Taufete’e (US) in the process.

He joins Schalk Burger (2004) and Brian Habana (2007) as the other Springbok players to clinch the accolade.

In victory, Du Toit was as humble as ever, thanking God, his teammates and the coaching staff for bringing out the best in him.

The wily fox that is Erasmus joins Jake White as the only other South African to win World Rugby Coach of the Year.

This is the first time since 2009 that South Africa have won any of the top three awards. DM

Tabelo Timse for amaBhungane • 8 hours ago