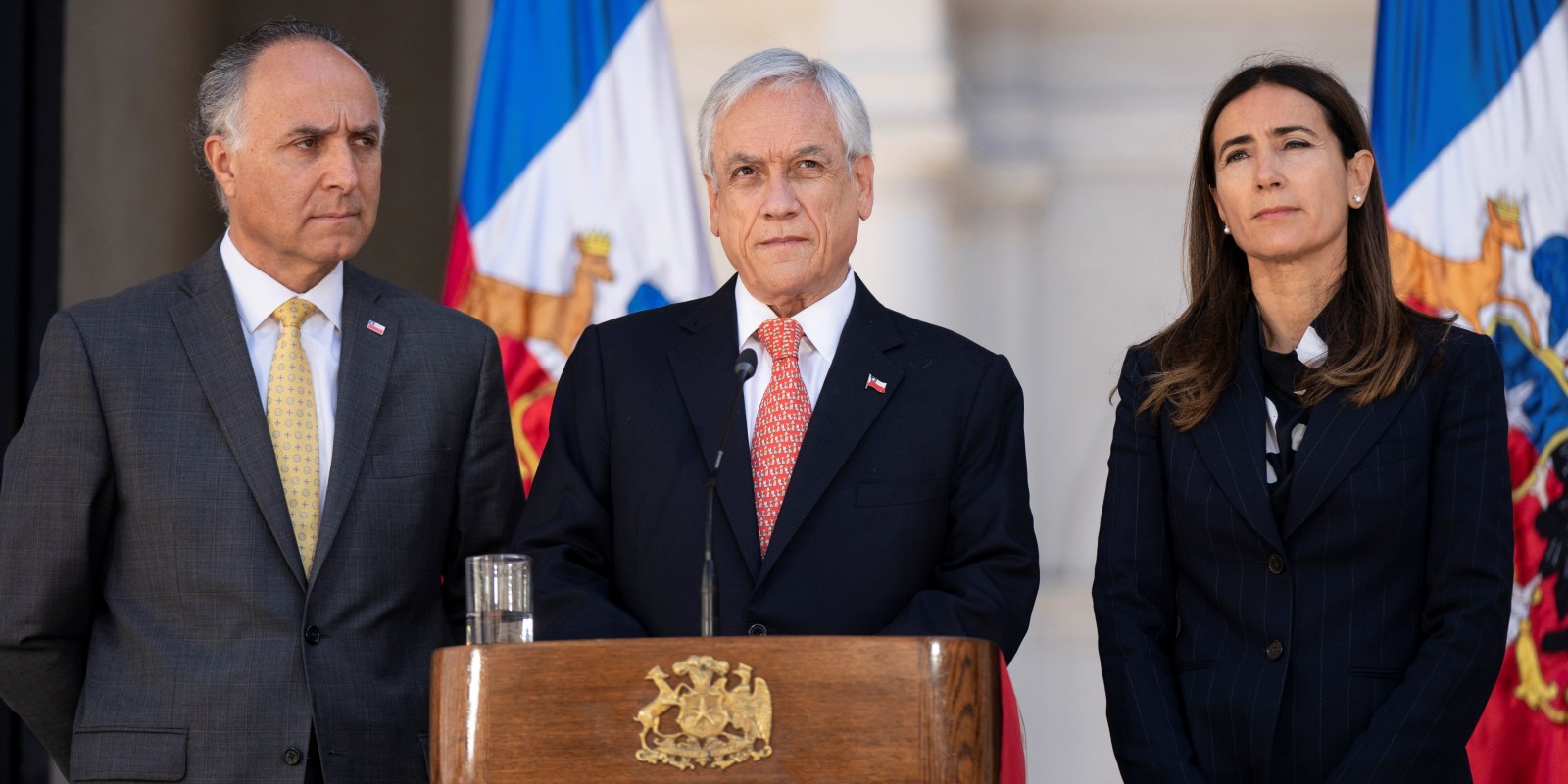 Chilean President Sebastian Pinera, centre, flanked by the Minister of the Environment, Carolina Schmidt, right, and the Foreign Minister, Teodoro Ribera, left, announces that Chile will not organise COP25 due to protests and demonstrations in the country. (Photo: EPA-EFE / Marcelo Segura / Presidency of Chile handout)

The climate crisis is not about finding the money for mitigation and adaptation. It is about who controls the money; it is about inequality.

Six weeks ago I was in Beirut in the basement floor of a UN building, complaining about bad coffee and flight delays with colleagues in blazers and leather shoes. It was a meeting of the UN Framework Convention on Climate Change (UNFCCC) on climate finance and sustainable cities. When the PowerPoints and panel discussions were finally over, I walked around the city and learnt about Lebanon’s history, its food, its wine. And the stark inequality and unaffordability of the city, which resonates with my home in Cape Town.

It struck me that the one word no one had spoken during our meeting was inequality. It was there in the polite allusion to “social inclusion” and “gender responsiveness” – but was never actually said. Most of the presentations, including my own, were about solutions to accessing climate finance – the money needed to fund projects aimed at addressing climate change. They were aimed at rooms full of multilateral development banks, international consultancies and government representatives.

But when anyone wanted to talk about systemic inequalities in the global economy and financial system, the response was, “We at x multilateral development bank have a programme for that”. Or, “We in x country have a project for that”. As if inequality could be solved with a quick tweak here and there and that we could mainstream (a buzzword in vogue) “inclusiveness” into existing policies and plans. No radical change was required.

A few weeks after I returned, Quito in Ecuador was brought to a standstill over new austerity measures proposed by the IMF. Next, I was watching thousands of people in the streets of Beirut, protesting against the political elite, corruption and mismanagement by the powerful at the expense of people. Hundreds have been killed in violent crackdowns on protesters in Iraq. Then the streets of Chile were filled with people protesting the increasing cost of public transport, the last straw after years of increasing living costs.

The Mail & Guardian dubbed 2019 the year of protest. These events represent groundswells of rage against inequality, corruption and the international status quo that ensures the rich get richer while everyone else bears the burden of stagnant wages and the cost of living rises sharply. New data shows that poverty remains high and levels of inequality are rising in many places in the world. In 2017, the richest eight men in the world owned more than the poorest half of the world. In South Africa, 10% of South Africans own between 90-95% of the wealth, while 80% of people own no wealth at all.

Chile, like South Africa, is one of the most unequal nations in the world, a result of decades of devastating neo-liberal policies first imposed by Pinochet in the 1970s following a US-backed coup. Then the news broke that Chile has cancelled COP25. It’s poetic in a tragic way; this may be the first time the reality of inequality has directly affected the climate negotiations.

COP25 was supposed to be the meeting of international heads of state and negotiators to continue their progress towards meeting the Paris Agreement. If you’ve been following the outcomes of the Paris Agreement, you’ll know that the world is a long way off from limiting the warming of the planet to 1.5°C. If radical action is not taken in the next 10 years, our current commitments place us somewhere between 3-4°C warming. There isn’t a lot of certainty about what exactly a 4°C warmer world will look like, partly because when multiple ecosystems collapse on a global scale, modelling it becomes more difficult.

But most scientists suggest that entire countries will be underwater or entirely uninhabitable. Large deserts will stretch north and south of the equator, near which it will be too hot to live. The world might have 11 billion people in that future, and at least two billion of them will be refugees. Will there be enough food and water for us all? It seems unlikely, given that many South Africans are already faced with shortages of these basic needs.

Globally, we often think of inequality in climate negotiations as developed nations versus developing nations. But in terms of who is responsible for the carbon in the atmosphere, there is a huge difference within countries, and the top 10% of individuals are responsible for 45% of emissions from consumption and about a third of them live in emerging countries.

Even if a tiny percentage of human beings make it through to the year 2100, our species will survive. But many of us will not be lucky enough to be wealthy enough to make the cut. By the time the global economy really starts to fall apart, I might be somewhere in my 80s.

The thought that truly haunts me is if we’re really headed for a climate apartheid, will my children’s children look at me the same way we look at the generations of white South Africans that lived through apartheid and did nothing to resist it or the inter-generational trauma it reaped on black South Africans? Will they look back at Facebook pictures of snorkelling holidays in Mauritius and resent the fact that not only is all the coral gone, but so are many small island states. The fact that Mauritius is a tax haven used by the wealthy to avoid paying their dues – and thus stripping states of resources required for a just transition – will not save it from two metres of sea-level rise.

Climate change will make the world we currently inhabit exponentially more unequal and drive millions more people into poverty. Moreover, many so-called climate-smart “solutions” have largely failed to address the roots of inequality and may end up exacerbating it instead. One example is off-grid services for wealthy households, who can afford the upfront cost of their solar home system or JoJo tank. Effectively, these households can afford to buy their way out of public services while everyone who can’t face load-shedding and Day Zero.

Energy and water tariffs make up a large share of South African municipalities’ revenue. As a result, more off-grid services in households and companies means less revenue goes to public services and the wealthy save more on costs under the banner of eco-living (while many drive around in large SUVs).

On a global level, the climate crisis has created an urgent quest to find the finance for climate mitigation and adaptation. The World Economic Forum projects that by 2020, about $5.7-trillion will need to be invested annually in green infrastructure. We could start by shifting the world’s $5-trillion in fossil fuel industry subsidies into climate action, but we’d still need an additional $700-billion or so a year.

While these figures sound huge, it’s important to keep in mind that the global economy leaks trillions of dollars in illicit financial flows every year, much of which is a result of large corporations and the super-rich avoiding tax and shifting their profits out of the reach of states. Developing states lose the equivalent of 20% of their trade value in illicit financial flows, estimated at around $1-trillion annually, largely as a result of companies manipulating their trade invoices to avoid paying tax and duties.

Corporate tax dodging costs developing countries at least $100-billion a year. Money laundering for the corrupt, organised crime and corporate crooks is estimated by the UN to now be a $2-trillion industry. And suddenly it seems as if the money we need for the climate crisis is not much more than the money that goes missing every year. It might as well be the change that governments lose in the global couch. International cooperation aimed at regulating the global financial system might turn out to be more urgent than attempting to mobilise the private sector to invest in climate action.

The climate crisis is not about finding the money for mitigation and adaptation. It is about who controls the money; it is about inequality. And focusing on tackling inequality has to be the starting point of addressing the climate crisis, not pandering to the powerful and maintaining the institutional systems that create and perpetuate inequality. Doing so will require a radical new way of engaging in the economy and in politics. We should be more ambitious than just asking for better climate policies, but instead reimagine our world as one that isn’t dominated by a handful of powerful nation-states and companies, divided into border regimes and ruled by forced austerity and tax havens. DM

Charlotte Scott is a professional in the climate change and development sector. She writes in her personal capacity and as a member of Thinking Space, a radical activist-scholarship collective.