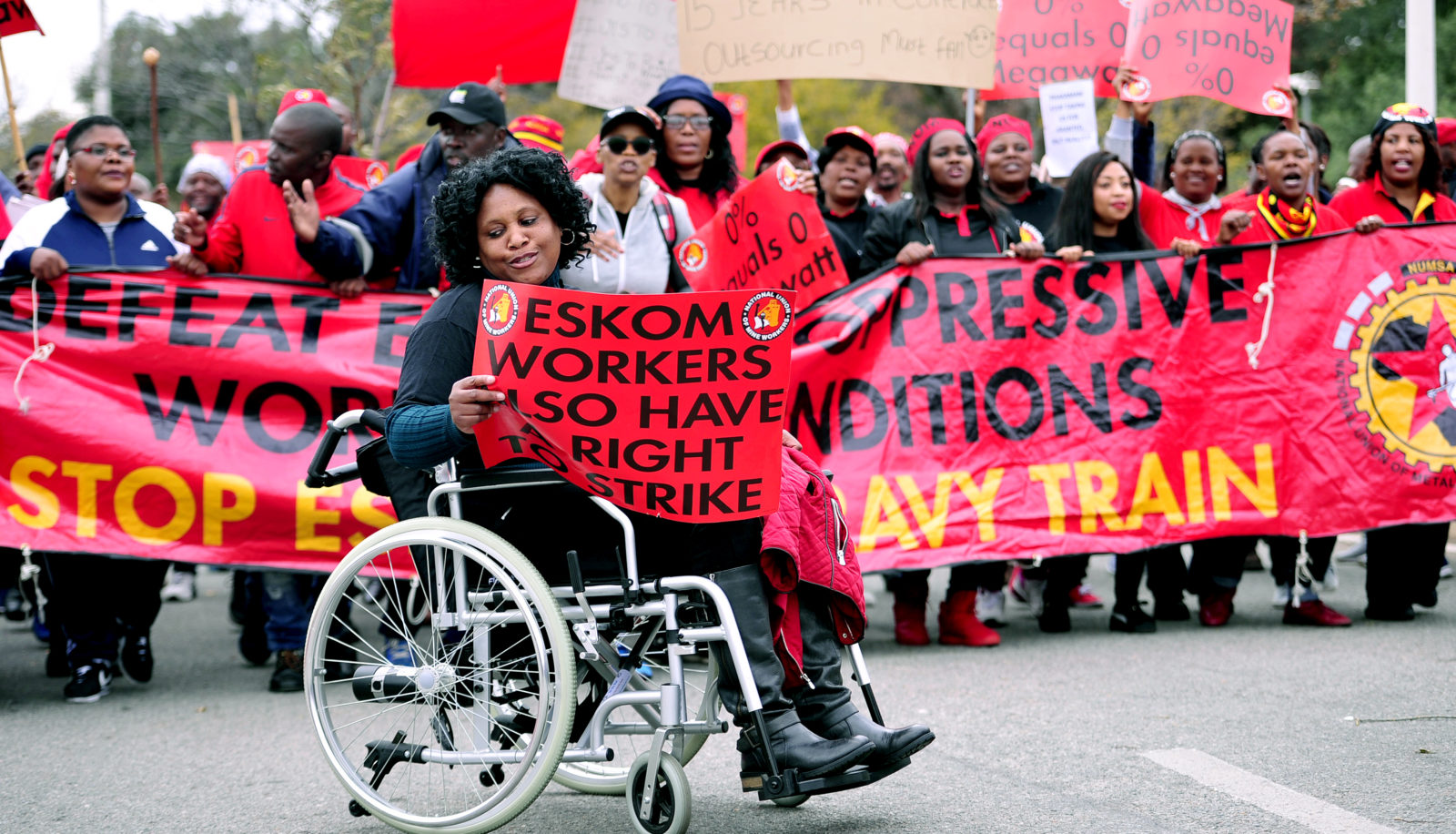 The threat, and promise, by the National Union of Mineworkers to pull the plug on South Africa sheds light on the negotiations about pulling Eskom out of its death spiral.

On Wednesday, while Finance Minister Tito Mboweni was explaining exactly how bad our financial position is as a country, the National Union of Mineworkers (NUM) said that if the breaking up of Eskom into three parts is not halted, they will “plunge the country into darkness”.

This is the biggest threat yet to the plan to reform Eskom. It is also an indication that leaders of one of SA’s largest unions are prepared to put the ‘interests’ of their own members ahead of the country. A fight that everyone knew was coming now appears to be just around the corner. The NUM leaders are playing with fire and risk an extreme reaction from those who would be affected by this, which would be exactly everyone, including the entirety of their membership.

The cast of characters involved in the Eskom situation almost defies belief. There is a finance minister who sometimes can’t stick to his own script (or recipe), frustrated board members (including one who publicly says there is political interference in their decisions), bloated management, workers who refuse to stop working, a public enterprises minister who still has not appointed a CEO, and a union that threatens to switch off the lights.

None of this is likely to engender optimism about the utility’s future.

The people who fix things are often somewhat boring; they go about their business quietly and they shun the limelight. (it is worth noting that Mark Barnes, who fixed the Post Office is an honourable exception; he has never been boring, and his Daily Maverick columns prove that.)

This is not the case with Eskom, where the fixers seem too excited and exciting to ever sit down and do what needs to be done.

That said, the NUM’s actions and comments, from the union that represents thousands of workers at Eskom, have struck a new low. In a statement published on Wednesday, the union issued a list of demands. It wants the government to start building a nuclear power system, to scrap the method of selling electricity through municipalities, and to stop the unbundling.

Then came the threat: “If these demands are not met we will shut down electricity generation, transmission, and distribution as such, plunging the country into darkness. It is not a threat but a promise.”

Consider that last sentence: “It is not a threat, but a promise”. This is talk reminiscent of a school playground, not the language of a sober-minded individual who is trying to find a solution to a difficult and complex problem that can break the country.

Problem is, at Eskom there are so many who have so much to lose. The power utility employs more people now than it did 10 years ago, and yet it produces less electricity. For those whom it employs, the prospects outside Eskom are bleak, and they will fight hard to keep what they have, even if the country around them collapses.

Another dynamic is that the membership of Cosatu unions, including the NUM, has dropped in recent years, and with that came a concomitant waning of their political power. Those who remain members are likely to be more ideologically radical, and on the verge of losing everything. This makes the fight fiercer.

On SAfm on Thursday morning, NUM president Joseph Montisetsi was happy to defend his union’s stance. He said the proposed break-up of Eskom into three parts would create “three boards and three CEOs” which would then end up with more people being employed. It is hard to see this argument holding water. It is like saying that a patient with an appendix that is about to burst should not have an operation because they would be wounded during the operation while being opened up by a scalpel.

If Eskom is not restructured, it will continue in its death spiral, in the same way that a patient will die if their appendix bursts. Eskom needs radical surgery, without which it will perish.

It should also be remembered that while NUM’s statement is grossly irresponsible, even by our standards (the EFF rejoiced on Thursday in going on Twitter and repeatedly referring to Gordhan as a “dog”…), it is (probably) unlikely to ever happen. The NUM and its leadership must surely be aware that there will be an intense reaction from much of the country were load shedding to be blamed on them. There could be civil disorder and the NUM membership would find themselves both under pressure from an angry South Africa AND without electrical power themselves — hardly a winning position. Doing things out of spite, just to hurt others, can never win friends and influence — someone should remind NUM leadership of that.

There has been much speculation about what is really happening in the talks between the unions and government about Eskom. Now we know: the talks are not going well.

The threat is out in the open. This is the NUM’s biggest possible weapon — in some ways their only weapon. By taking the camouflage covers, their doomsday weapon itself is revealed.

If there is load shedding in the near future after a mechanical malfunction, regardless of what really happened, the NUM will be blamed for it. The airing of their threat/promise will actually weaken the union through the remainder of these negotiations.

It’s clear to anyone that solutions to the Eskom crisis are still a long way off. It has been 11 years since the first incidents of load shedding in January 2008. It feels that a solution is still — at least — another 11 years away. A NUM-led campaign of vandalism would strain the nerves of the South African public to breaking point. The NUM leadership should have spent more time strategising about the way they communicate their grievances, Reckless statements, like these threats, could soon drain every last drop of goodwill they might still have. DM