‘No safe, South Africa. No safe’ 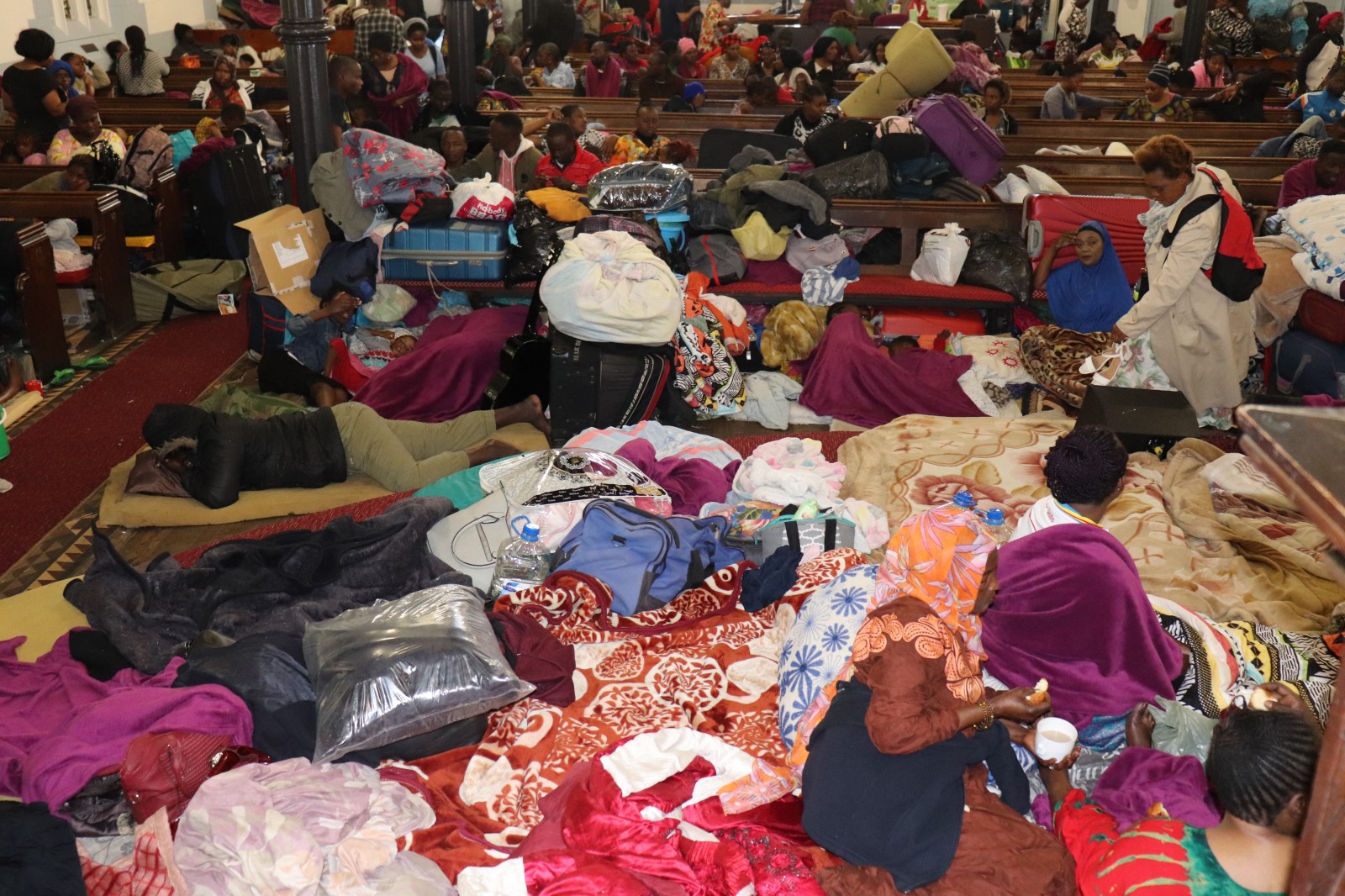 The refugees have placed bedspreads and blankets inside the church, and have pledged to stay there until their demands are met. (Photo: Noah Tobias)

Hundreds of refugees who were on Wednesday forcibly evicted by police from a Cape Town building they were occupying are now staying in the city’s Central Methodist Church. Here are some of their stories.

Emeka is a stocky man with an impressive beard. He held his five-month-old child for the entirety of the interview, occasionally pausing to wipe spit from his face.

“I’ve been in South Africa for 10 years now. I have a wife and this one,” he said, pointing to his baby.

Emeka fled Democratic Republic of Congo (DRC) in 2002. He spent years in refugee camps in Burundi before coming to South Africa.

“In the years I’ve been here, I keep getting the six-month papers from Home Affairs,” Emeka mused.

“I have never been able to work. I was doing car guard, but they asked me for a work permit and sent me to Home Affairs. You have to get a passport for that one, but remember, the refugee doesn’t have a passport.

“I have known a lot of problems in this country. A lot, a lot, a lot,” he said. “My wife has a big sickness, because we were attacked two times at our own place. She had never seen a gun before.”

The attackers gave Emeka’s family a warning – leave our country, or we will kill you. The family moved house as soon as they could.

Emeka, his wife, and his five-month-old son were caught in Wednesday’s scuffle in Greenmarket Square, Cape Town. He alleges the police jailed his child alongside him.

“They threw him down, they took him and his mother and put us in jail. Even him,” he said.

“My wife is still young. She needs to go to school. And I am even planning for his future,” he said, smiling down at the baby in his arms.

Jahari ran from the war in DRC, after her mother was killed and her father shot and paralysed. She and her husband fled to a place where they thought they would be safe. They were captured by soldiers, who separated them and kept her as a wife.

Jahari stole a little money from the soldiers and escaped.

She found her children, who were in Tanzania with her sisters, and together they came to South Africa – where they thought they would be safe. Their experience here has been traumatic.

“She’s experiencing threats every single day she’s in South Africa,” said her friend John, who acted as a translator.

When the police came to evict the refugees, Jahari attempted to stop them from beating refugee leader JP Malous. In the scuffle, she too was hit.

“We tried to help JP, and then tried to hide. The police began to fight us, and we didn’t have the power to fight with them,” said another friend and translator, a Burundian woman named Jeanine.

During the conversation, Jahari began to tear up. John stepped in to continue where she left off.

“I peacefully surrendered to the police, and asked them not to brutalise me,” he explained. John alleges he was placed in a police van alongside 14 other people, including small children.

“There was too much heat, too much suffocation in that very small space. And on top of that, they added pepper spray. I had to beg for water for the children,” he said.

Gentille is a short man with a sly smile. He fled war in DRC years ago, after his brother was killed by soldiers at the home they shared.

“I came to South Africa as a refugee, but I have been mistreated,” he said. “We were hit out there by the police, who hurt us and mistreated us, so we ran to the church.”

“I have been here for seven years, but I have no documents. I’ve been looking for work, I really have, but they don’t accept me.”

After he arrived, Gentille faced rampant xenophobia from locals. “They call us kwere-kwere,” he explained. When we get in the taxi, they act like we are dirty and won’t touch us. They start saying, ‘something is smelling in here.’ ”

“That’s how we live in this country,” Gentille said. “We live in the problems only.”

Mary, a 15-year-old girl from Kenya, came to South Africa 10 months ago with her Burundian mother. Since arriving, she has faced discrimination and xenophobia from numerous sources.

“When I go to school, people there follow me, threaten me, and fight me,” she said. “So I told my mother I don’t want any more school, and I stay at home and help her.

“We don’t have a safe place to stay,” Mary explained. “They burned down the house when we moved here, and stole things from my mother’s business.”

During Wednesday’s eviction, Mary’s mother was injured so badly she was unable to walk. Other refugees made a place on the church floor for her and Mary, whose eyes still sting from the pepper spray.

Tearing up, Mary talked about her plans for the future. “My mother says, ‘Mary don’t worry. When we get out of here, I’ll take you to any school you want.’”

Earlier on Thursday, refugee leader JP Balous gave a speech from the steps outside the Central Methodist Church.

“We have already slept in the bush,” he exclaimed to a cheering crowd. “So this is not so much harder.”

The refugees have pledged to occupy the church until their demands are met. “Mitchells Plain, Khayelitsha – no, we will be here until we leave South Africa,” Balous said. DM