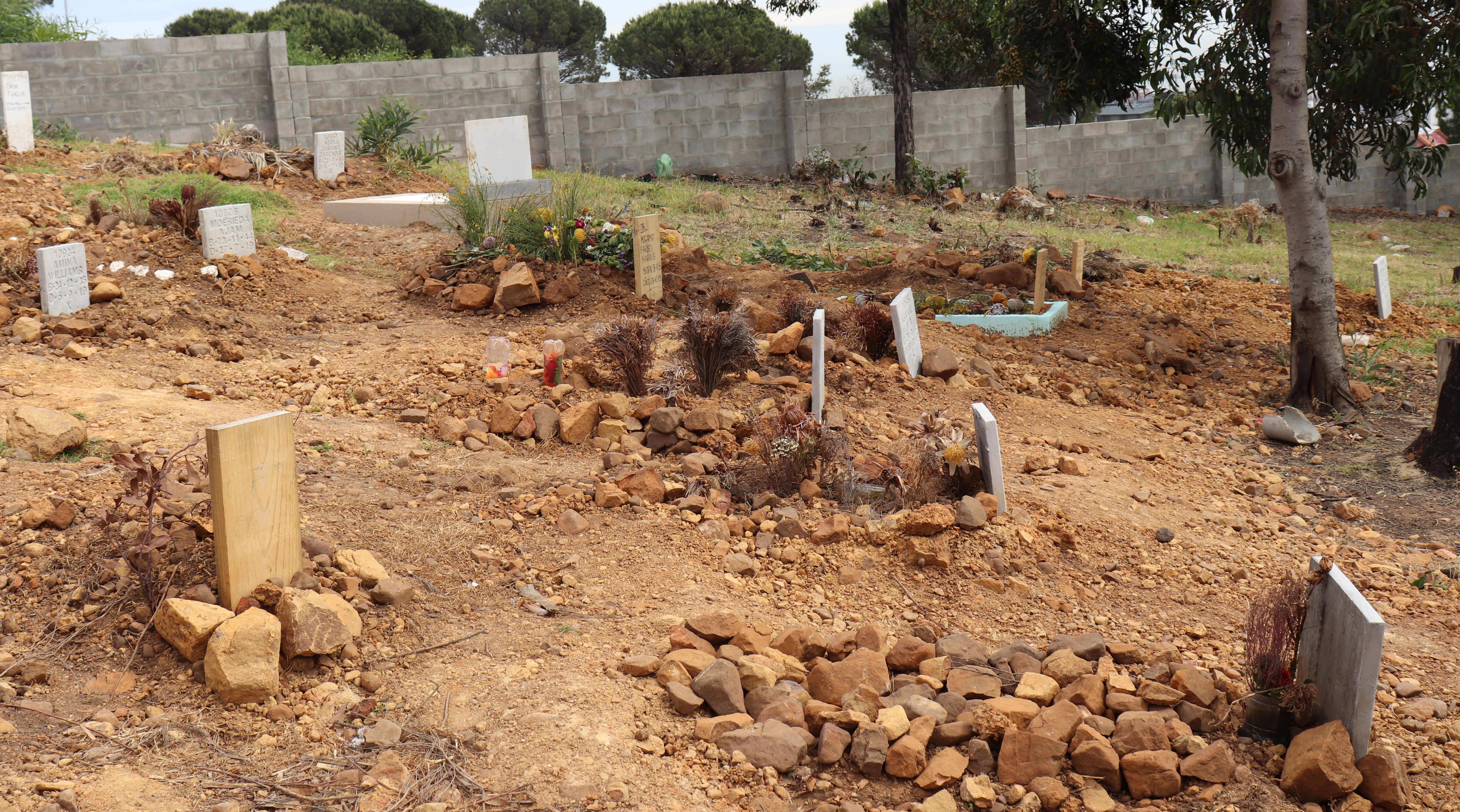 Most of the desecrated tombstones have been claimed after headstones from fresh graves in the Mowbray Muslim cemetery in Cape Town were moved on 30 October. Photo: Tessa Knight

On 30 October, workers at the Mowbray Muslim Cemetery came to work on a normal day, with seven burials scheduled to take place. Instead, they found approximately 70 headstones removed from fresh graves and placed into the shape of a cross, while others were placed into dug-out holes in the shape of a triangle.

For the last three days, relatives with loved ones buried in the Mowbray Muslim Cemetery have travelled there to see if the tombstones of their deceased relative was desecrated.

Some time on Tuesday night, vandals broke into the cemetery and moved tombstones from site X at the top of the hill and out of sight of anyone walking by. At night, the cemetery is pitch black – there are no lights on the land, no street lights nearby, and no security staff to look after the area.

“This cemetery is old, maybe 130 years old now, and nothing like this has happened before. Nothing, ever,” said Neematola Hendricks, treasurer of the Mowbray Muslim cemetery board.

On Thursday there were family members milling around, looking at the tombstones resting against the cemetery walls. (The original scene was documented before workers moved the headstones so family members would not see them laid out).

In one of the seven pre-dug graves a used condom wrapper had blown into the open hole. Adam Tenda, who lives in Gansbaai and drove to Cape Town to find out if his father-in-law’s grave had been desecrated, stood above the grave for some time, distressed by the symbolism.

“This is emotional terrorism. It’s disgusting. For whatever reason it was done, there can never be any justification for it. It’s not as if people are buried with jewellery, it’s not as if they are put into expensive caskets. So this is not treasure hunting, it is something else. It is malicious,” said Tenda.

According to City of Cape Town by-laws, no person is permitted to “in any way damage, deface or desecrate any part of a cemetery or anything therein”. Anyone caught and convicted of desecrating a grave or graveyard can be liable to a R50,000 fine, six months jail time or both.

But according to Hendricks, there is little that can be done. So far, there are no witnesses. No person or group has come forward to take responsibility for the act, or explain why it was committed.

“We went to the police in the morning, but they told us there was nothing they could do. Then we went back later and they were more helpful, they opened a case of vandalism for us. But what can we do?”

Woodstock police are investigating a malicious damage to property case relating the damages caused to graves at the Mowbray cemetery.

“I’m sad, obviously. But as well with the sadness I’m disgusted that my fellow South African citizens could do this. It’s heartbreaking. We are still dealing with the loss of my father, we are mourning, and then to wake up one day and find out his grave had been desecrated. It is disgusting,” Moses said.

The Muslim Judicial Council (MJC) echoed Moses’ feelings. MJC’s cemetery management committee head, Sheikh Riad Fataar, told Daily Maverick that the situation was very distressing for the council. Fataar said it is not known if the symbols are the work of a religious group, a cult or simply the result of religious intolerance.

At a press briefing on Friday, held at the cemetery, political party Al Jama-ah called on the national government to ban satanism in schools.

“We believe this was part of a Halloween expedition,” said the party’s Ganief Hendricks. The party has condemned the act, and is calling on the community to exercise restraint against the “target”.

According to Fataar, the MJC “definitely sees the act as an Islamaphobic attack”. But the council has also called for the community not to blame others without any evidence, particularly other religious groups.

“People are sad, but I am glad to see that people are not reacting in anger. We must not blame Christians just because there was a cross there,” said Fataar.