Melinda Gates has an uplifting message for all women

Melinda Gates has an uplifting message for all women 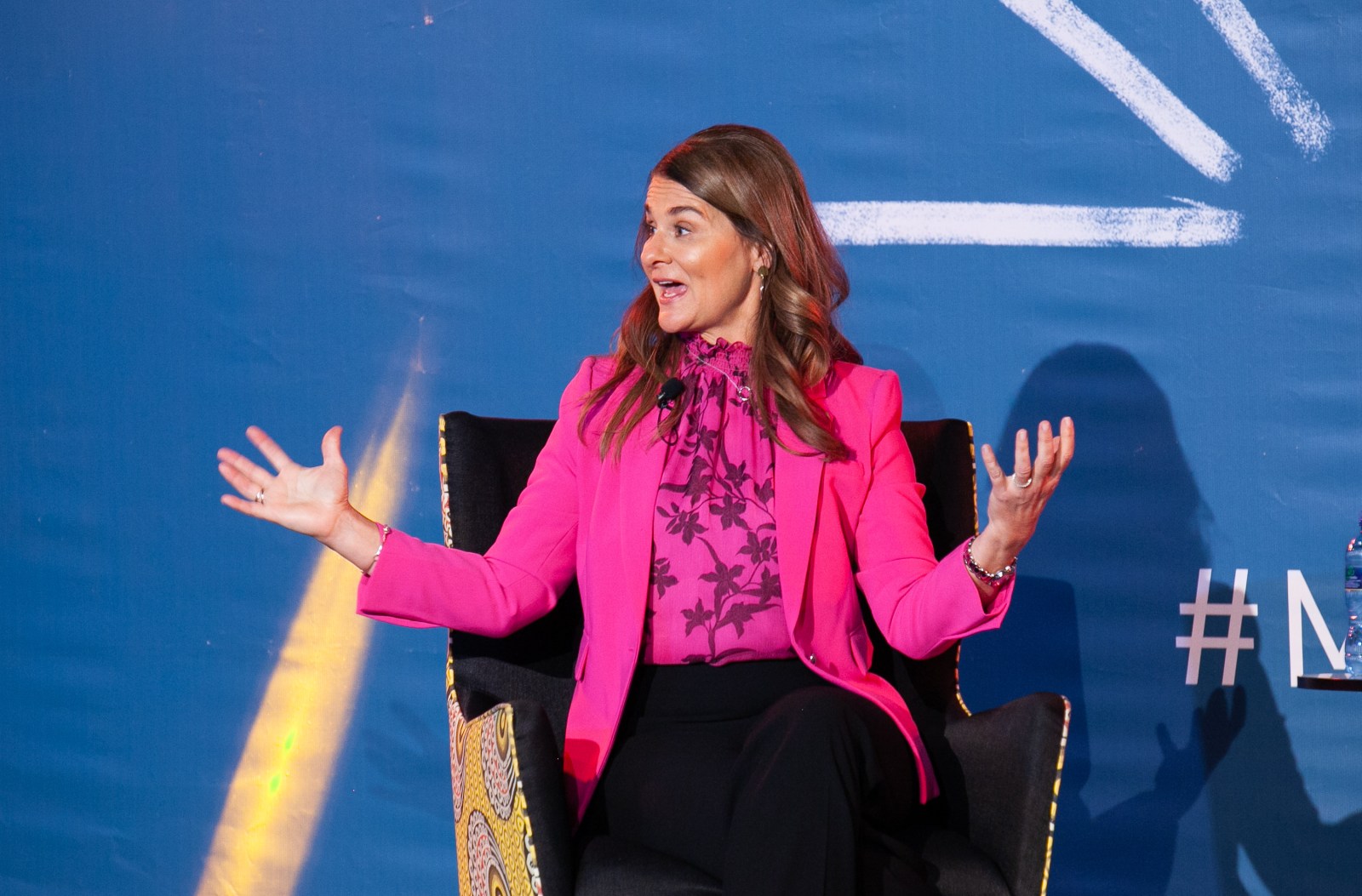 When you’re a billionaire, people listen; they also write you off. Melinda Gates’ new book tells the story of shrugging off labels so the true fight for gender equality gets the lift it needs.

If you were one of the hundreds of people who bought a ticket to the Melinda Gates in conversation with Redi Tlhabi event on Tuesday night in downtown Johannesburg, count yourself among the most privileged people in the world.

If you were privileged enough to afford the ticket then you have the means to “lift someone else”, Gates said, adding that “none of us gets somewhere without someone lifting us up”.

Gates, a billionaire philanthropist and now author, was addressing an audience of about 1,100 people. South Africa and the rest of the continent have over the years become familiar terrain for Gates and her husband, Bill, who travel to the continent regularly as part of the Bill & Melinda Gates Foundation’s work.

Gates’ close relationship with Graça Machel, whom she calls a mentor, has also cemented her connection to South Africa. Machel was in the audience, showing up as friends do (as Gates put it), and representing the Nelson Mandela Foundation that co-hosted the event.

Gates said growing up in Dallas, Texas she saw lift come in the form of people who helped her father, an aerospace engineer, with small loans to start a side business, as well as the teachers who gave her and her siblings a push in the right direction.

In her newly launched book The Moment of Lift (Bluebird, an imprint of Pan Macmillan), she tells the story of the IBM interviewer whose sound advice was also a lift. The interviewer, a woman who had clearly worked for the company happily for years, told Gates, then a young Duke University graduate, to take a job with Microsoft instead of the one IBM was offering. The interviewer recognised the opportunities for advancement for a young woman at a start-up, rather than for a fresh graduate to be absorbed into the corporate culture of monoliths hardwired almost to disadvantage women.

Gates ended up working for Microsoft for nine years. She was 22 years old when she started and was among the company’s first class of MBA graduates. When she arrived for the orientation in the then tiny Seattle office boardroom she was the only woman. However, it wasn’t weird to the computer science graduate — she was used to being the only woman in a room.

She soon realised her IBM interviewer was right. Her role was in applications marketing and three weeks into the job she was “flying to New York for a meeting and I’m running the meeting. I’d never been to New York. I’d never even hailed a cab!”

“We were climbing the mountain without a map, and we were building the mountains without instructions,” she writes of the early years of the software giant. It was the kind of problem solving, enthusiasm and can-do attitude that would guide the establishment of the foundation.

Of course, the IBM interviewer’s nudge in the right direction inadvertently added to her love story too. It was some years into her time at Microsoft that she ended up at a company event one evening taking up the empty seat at Bill Gates’ table. There were sparks and when they met again in the parking lot later, he asked her out – “for dinner two Fridays from today”. It wasn’t spontaneous enough, she told him in declining. He called her back an hour later making plans for drinks that Saturday night.

Gates’ book begins with literal lift-off, the rocket launches she watched with her family as a kid and how the thrilling countdowns signalled something extraordinary. It’s the metaphor threaded throughout the book. It’s her own stories of lift that have given rise to the Bill & Melinda Gates Foundation that is now nearly 20 years old. It was founded when Gates decided after the birth of their first daughter that she didn’t want to go back to work.

There are also the lessons learned from mentors and individuals she’s encountered on the way. Some of the people she introduces in the book are those whose lives have been lifted through the right interventions and support. In turn, their stories and journeys have inspired Gates to better action.

The timing of the book marks two decades of the foundation that at the end of 2017 was reported to have an endowment of $50.7-billion, making it the largest private foundation in the world. Gates also said that the book deliberately leverages off the global moment of the #metoo movement and her intention “that the window that was opened remains wide open”.

It’s her call to put women at the centre, not because it’s the nice thing to do, or even the right thing to do, but because investing in women is the essential component that can lift lives, families, communities and the world. Gates’ book joins these dots explicitly: of the transformation that comes from giving women access to contraceptives, to the power of collaboration and information for women farming co-operatives, through to equal education for girls, and even women in workplaces making room for other women.

In discussion at Newtown’s Fox Junction with Thlabi, a talk show host, broadcaster and author, Gates returned several times to the necessity for strong data and monitoring and evaluation. This informs the dozens of global interventions undertaken by the foundation.

“It guides how we organise and is what can be measured over time.” The research is balanced with other insights too. Gates talked about the lesson of being initially written off by Hans Rosling, the Swedish physician, academic and co-founder of the Gapminder Foundation, who died in 2017. Rosling, a professor of international health, felt that “American billionaires giving away money will mess everything up” when he heard that Gates’ foundation was stepping into the fray to support healthcare needs for the world’s most vulnerable.

It was the lesson Gates needed, all those years ago: that money doesn’t necessarily make problems go away and that humility and learning, unlearning, and learning more matters. For Gates, to “see poverty through the eyes of the poor” meant following Rosling’s example of being on the ground, not making assumptions from her Seattle mansion. At the very least, it meant making deep listening a practice, something she learnt from Rosling, who became a mentor and friend.

Listening to women’s stories “when you sit long enough with someone” gave her the resolve that she could use her resources and her clout as “the most powerful woman in philanthropy”, as Forbes magazine described her, to close the gap in her belief that “all lives are equal, but not all lives are treated as such”. She did have a right to intervene, even as a billionaire with a different lived reality.

Her message is about leaving no one out and about understanding that equality and change must come about everywhere, from villages in India and Africa to workplaces in New York to households in Joburg’s suburbs.

“The average woman in South Africa works an extra two and half hours doing chores every day. In the United States, it’s an average of an extra 90 minutes a day more than the average man. It amounts to seven years over a woman’s lifetime,” Gates said, on the stage in Newtown.

When women are doing the heavy lifting of work, caring for children and still having to fold laundry, do the grocery shopping and cook the evening meal, it “unbalances relationships”, making it the “common burden that binds many women together”. Unpaid labour also has the detrimental consequences of girls underperforming at school because they can only get to their homework hours after finishing chores that boys are relieved of, Gates said.

The book is Gates’ reflection on action, hope and the real humans whose stories still need to be heard. It’s also about finding her voice – that’s compelling and reflexive – to stand up against her own faith, the Catholic church, on contraception; to getting Bill Gates to see that he had to do the school run and even recognising the moment that paying it forward can be when she gives up her hard-won platforms so other women can be heard.

Gender equality is everyone’s fight if “we’re to crack the patterns of history”, as Gates puts it. “Outsiders are not the actual problem, the urge to create outsiders is.”

As she writes: “We need the help of every advocate now. Women and men… Our call is to lift women up – and when we come together in this cause, we are the lift.” ML