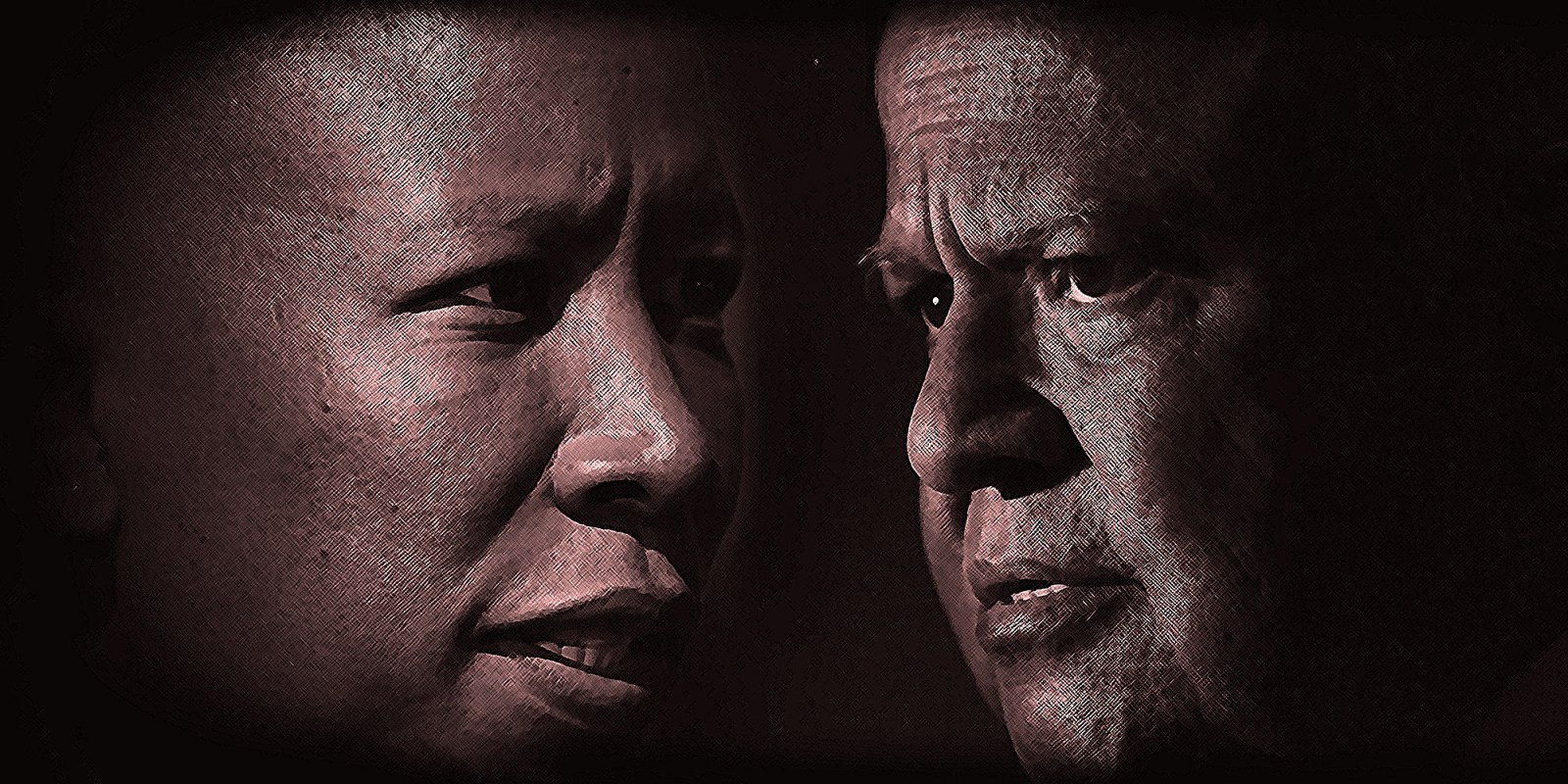 The Equality Court and the Human Rights Commission have set up a double standard on hate speech if you consider different judgments and findings. Is it a racial double standard?

Julius Malema is a running dog of tobacco capital. And Floyd Shivambu is a red devil.

This may seem like a troublesome start to a story to analyse a court judgment, but we do it to make a point. On Thursday 31 October, the EFF won a second thumping victory for free speech in the Equality Court in a week.

Judge Roland Sutherland ruled against the Minister of Public Enterprises Pravin Gordhan who had brought an application in the Equality Court to interdict the EFF and its president Julius Malema from attacking him on public platforms.

The judge found that while Malema’s rhetoric calling Gordhan a “dog” of “white monopoly capital” may have been “puerile self-aggrandisement” and “a juvenile rant”, it did not amount to hate speech. It fell within the scope of protected and free constitutional speech and did not run foul of the provisions of the Equality Act.

Thus, is it fair to call Malema “running dog of tobacco capital” since he is allied closely to cigarette interests?

Last week Judge Daisy Molefe in the Equality Court also found against the SA National Editors’ Forum (Sanef) which sought to interdict the EFF and its leadership from attacking journalists on political and social media platforms. One of the instances of attack was the fact that the EFF called Daily Maverick journalist Pauli van Wyk “satan” in a tweeted attack. Is it thus within the bounds of free speech to call Shivambu a red “devil” — he is often quite devilish and mostly wears red?

The judgments are a good precedent for free speech, but for civil political dialogue? That’s another story.

Gordhan brought the application after an 18 November 2018 speech by Malema and other leaders of the EFF outside the Zondo commission of inquiry into State Capture. In that speech, Malema said: “Our attack on Pravin Gordhan is an attack on White Monopoly Capital because Pravin is a dog of White Monopoly Capital. We must hit the dog until the owner comes out…” said Malema and in the same speech called on the EFF crowd to deal with a set of journalists he named.

Since then, the EFF has “hit” out at Gordhan repeatedly, making him its whipping boy in a campaign that stretches from its defence of Public Protector Busisiwe Mkhwebane to its running attacks on the SA Revenue Service (SARS). In the speech, Malema also said:

“Pravin is going to fight dirty… There will be casualties. There can even be a loss of life.” This threat moved Gordhan to go to court.

The Equality Act constrains speech only on grounds that are “hurtful, harmful or promote or propagate hatred” on a set of “prohibited grounds” which includes race, gender, sex, pregnancy, marital status, ethnic or social origin, colour, sexual orientation, age, disability, religion, conscience, belief, culture, language, birth and HIV/Aids status; or grounds which “causes or perpetuates the systematic disadvantage, undermines human dignity; or adversely affects the equal enjoyment of a person’s rights and freedoms in a serious manner”.

The Equality Act must be considered in conjunction with Section 16 of the Constitution which majestically protects free speech and constrains it within grounds even more limited than the equality legislation.

Upon such judicial scrutiny, Gordhan and Sanef failed in both their applications.

Judge Sutherland writes in the Gordhan case: “The utterances (of Malema) are a mix of allegations of fact and of opinion. The utterances were, it can be inferred, aimed at rousing the crowd to endorse the respondent’s opinions. The content and tenor of the utterances were clearly intended to be hurtful towards the applicant and promote hatred of the applicant. For the purposes of this judgment, it will be assumed that every allegation of fact is false and every opinion obnoxious and severely disparaging of the applicant (Gordhan). The question is, however, whether the utterances go any further than that: are the utterances discriminatory within the meaning and purpose of the Equality Act?”

The judge finds that they were not. You’ve got to take Malema’s juvenile rants for what they are, he argued.

“It is plain that the allusion to the loss of life is a mere example of an extravagant juvenile rant stretching hyperbole to the extreme in the course of a demonstrably demagogic speech,” the judgment reads. It goes on: “Its function was to proclaim the speaker as brave and steadfast in the face of any foe however mighty and that the space to stand at his right hand is only reserved for the sturdiest of fellows. The dominant impression is that it is puerile self-aggrandisement, not a threat to the applicant or anyone else.”

Gordhan lost with costs as the judge argued that the insults were personal in nature and did not satisfy the prohibited grounds set out in the legislation.

Sanef lost, but no costs were granted against it, which is about the only concession made by the court. In that judgment, Judge Daisy Molefe dismissed the argument that journalists should be a protected class under the Equality Act saying this would amount to “press exceptionalism” which society should guard against. She found that unpopular, offensive or controversial views do not constitute hate speech.

She also summarily dismissed Sanef’s argument that the EFF is responsible for the vicious trolling habits of its supporters on Twitter and the judge found that no causal link can be made between the organisation and its supporters over whom it, therefore, has no digital sway.

Great for free speech, but is a double standard developing on hate speech?

The two judgments continue to be evidence of how the courts have assiduously protected free speech and drawn the line constraining it very tightly and very narrowly. But it’s worth looking back a little further at another hate speech case to assess whether there is judicial consistency in hate speech cases.

In August, Judge Phineas Mojapelo found that a display of the old South African flag amounted to hate speech — constraining even symbols of what he found to be hate speech. In the case brought by the Nelson Mandela Foundation against the far-right lobby group, AfriForum, the Equality Court found the display of the flag to be an act of hate speech.

In a wide-ranging and much-welcomed judgment, it was decided that a flag was a symbol and a symbol could be regarded as “words” or in this case, speech. The court concluded that the old flag or apartheid flag was a vivid symbol of white supremacy and black disenfranchisement and suppression.

“Further, the dominant meaning attributable to the old flag, both domestically and internationally, is that it is for the majority of the South African population as a symbol that immortalises the period of a system of racial segregation, racial oppression through apartheid, and of South Africa as an international pariah state that dehumanised the black population,” found Judge Mojapelo, according to a summary of the judgment.

“The Court found that any gratuitous display of the old flag, besides being racist and discriminatory, demonstrates a clear intention to be hurtful, to be harmful and incites harm; and to promote and propagate hatred against black people…”

This judgment constrains free speech on several grounds and includes that which is hurtful, harmful and incites harm, both grounds raised by Gordhan and by Sanef in relation to the EFF’s increasingly wild rhetoric. In both cases, arguments were made that the EFF relied on race and gendered tropes in its attacks — but these were shot down by different judges.

If you read the three judgments together, it could be argued that a judicial double standard has been created on hate speech and free speech and which will sooner or later have to be ironed out in a higher court.

In an omnibus finding against five different complaints relating to various speeches by Malema and other EFF leaders which involved incendiary race rhetoric in March, the Human Rights Commission also found that the EFF leader was not in violation of hate speech provisions.

“The impugned statements made by Mr Malema constituted robust political speech, which enjoys special protection as expression that lies at the heart of the right to freedom of expression” said the Human Rights Commission. It added that:

But in the findings, the commission also set a new benchmark, saying that people who had been oppressed and dispossessed under apartheid had a higher threshold for free speech (presumably than white people). Such a benchmark has never been set by a Chapter Nine institution or in the court and it remains unchallenged, perhaps because the HRC findings do not set precedent.

In a statement by his lawyers, Gordhan said he “noted” the judgment “…the court decided that a hate speech contravention can be found only in limited and narrow circumstances,” said his statement. The statement added “…the EFF’s dangerous abuse of prejudice subverts our constitutional democracy and promotes the politics of hatred, intolerance and division. We will not be intimidated and will continue, with the vast majority of South Africans, to challenge those who undermine these goals”. DM