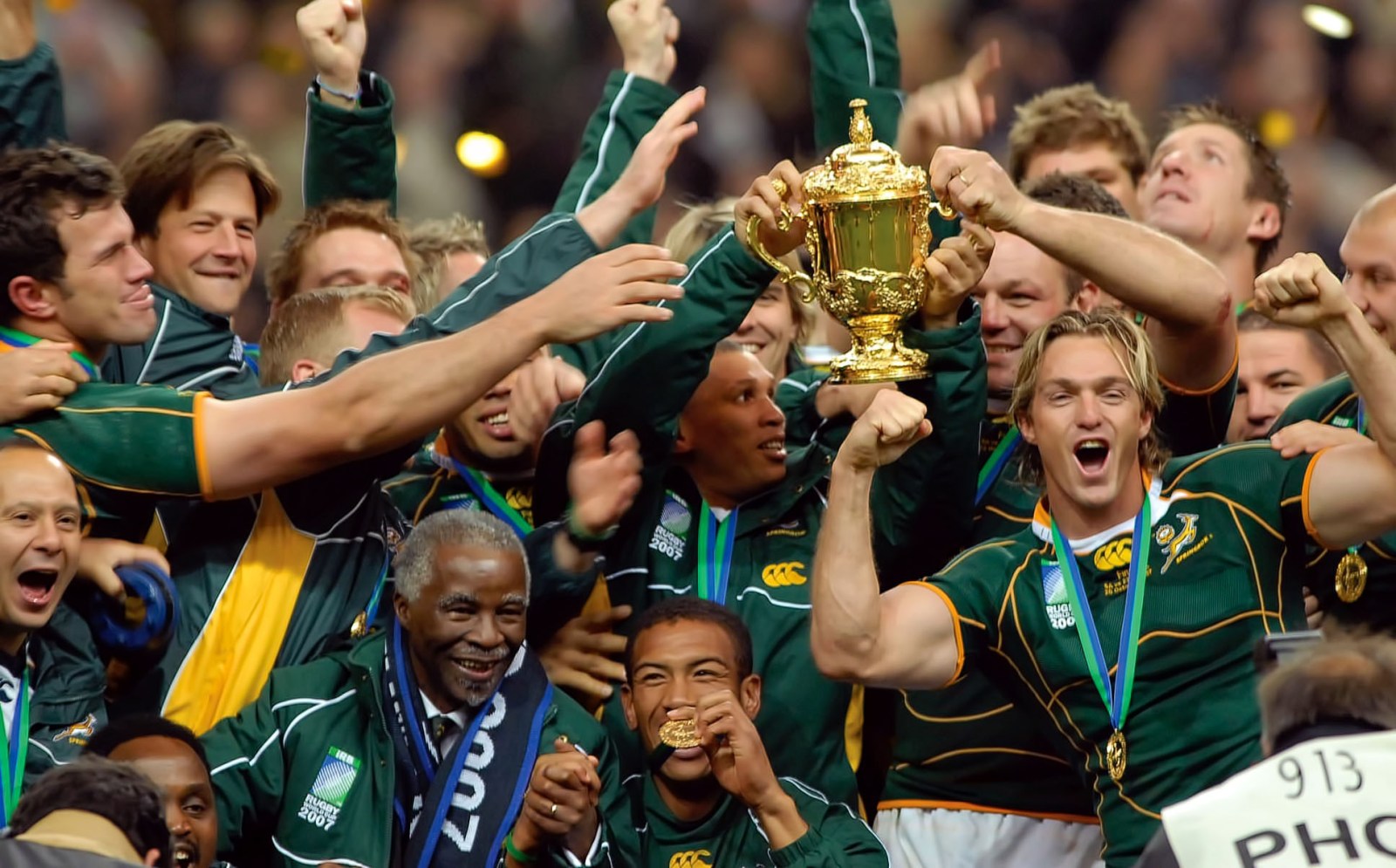 Springboks during the 2007 Rugby World Cup in France. Photo is found in Wessel Oosthuizen's "Portrait of Rugby" which is a collector's item book published in 2008 and re-edited for a second print in 2016. (Photo by Wessel Oosthuizen/Gallo Images)

Ricky Januarie, Bob Skinstad, Albert van de Berg, Wayne Julies, Ashwin Willemse, Johann Muller, Akona Ndungane and Gary Botha were all excellent players in their own right. They are also World Cup winners from 2007 even though they played very few minutes in the tournament in France.

Winning a Rugby World Cup takes an immense amount of hard work from a variety of people. It requires skill, vision, planning, execution and a little bit of luck too. It also requires a cohesive squad.

The very nature of a successful team is that there is depth, ideally in every position. But the flip side of depth is that not everyone can play. So managing the expectations and disappointments of those that are overlooked for the massive games is just one of the many challenges the head coach faces.

In the merciless world of top-tier rugby there is little time for sentiment and even though it’s a team sport, individuals are fighting small skirmishes with team mates to earn the right to play.

Which is why the eight players who will sit in the VIP seats of the Yokohama International Stadium when South Africa and England clash for the right to become Rugby World Cup 2019 champions should be lauded as much as the on the pitch.

They will share in the triumph or the despair on Saturday, as much as those on the field. What they won’t be able to do is contribute with actions during the course of the match.

Their contributions though, has come in a different way. They have had to remain positive and supportive while knowing that barring injuries, they weren’t going to play a part in the most important matches at RWC 2019.

Most only featured in the two “easy” games against Namibia and Canada, which the Boks won 57-3 and 66-7 respectively. They played their parts.

Elton Jantjies scored 28 points in those two outings and Reinach scored a blistering hat-trick of tries against Canada while Brits captained the side in those matches.

Although Nkosi played against Wales in the semi-final last week, which the Boks won 19-16, it was only due to Cheslin Kolbe’s ankle injury.

They have done all they could do, knowing that the door to playing in the final was closed. Coach Rassie Erasmus had been up front about that to the entire squad.

They know exactly where they stand and what their roles in the set-up are. That doesn’t make it easier for them, but as long as there is honesty from the coaches about their roles, it does lessen the chances of disharmony.

“It’s tough on Sbu to drop out of the 23 altogether but, like the other seven, non-playing squad members – and the two injured players back home [Trevor Nyakane and Jesse Kriel] – he has made vital contributions to our campaign,” Erasmus said.

“But we have been developing some momentum through the tournament, which has come from consistency, and although we know there are things we can do better this is a fit, well-practised set of combinations who know what they have to do on Saturday.”

Jake White, who coached the Boks to the 2007 world title, described how important the fringe players were in his autobiography In Black and White, the Jake White Story.

“Our success in the World Cup was always dependent on the attitude of those eight,” White wrote. “If there are eight bitter or unhappy players, it can derail a campaign.

“Throughout the tournament, it came down to how they were managed, how honest we were with them, how much a part of the match 22 they felt, how they were looked after physically and contributed to training sessions.

“I’d often thank those eight guys for their contributions. I was open with them about why they were not selected, and I kept them on their toes by running moves (that included them). As coaching staff we ensured that we ran the same plays with different sets of players. It kept everyone sharp, and made those who weren’t selected feel they were contributing in the real way they were.

“Gary Botha is a great example of the perfect team player. He started the year as number two hooker behind John Smit, and by the end of the World Cup he was behind Bismarck du Plessis in the pecking order.

“That was tough on him, but you don’t become a Test hooker unless you’re a tough person. His positive approach summed up the attitudes of the other unlucky seven. Gary had been my number two hooker when the World Cup squad was named, as he was such a team man. Circumstances changed, but Gary’s attitude didn’t.

“Wikus van Heerden was the same. He was in and out of the side. Ricky Januarie had been our number one scrumhalf choice in 2005, but had slipped to number three in 2007. Yet he remained positive.

“I believe I’ve shown consistency in four years as a coach, because Ricky knows I left him out based purely on a rugby decision. Fourie du Preez had moved to number one scrumhalf and Ricky had dropped down the pecking order. He handled himself brilliantly. Wayne Julies, Akona Ndungane, Bob Skinstad, Gurthro Steenkamp, Ricky, Gary, Albert van den Berg and Ashwin Willemse – the eight who missed out on the final have my greatest respect,” said White.

Erasmus’ decision to recall 38-year-old hooker Brits was not only about his ability as a player, but his maturity as a person. Brits has been the unofficial leader of the forgotten eight.

Brits is by nature a gregarious and sunny person, but he is also a fierce competitor and proud rugby player.

When Erasmus asked him to reconsider his retirement and get into great shape for RWC 2019, it was with the goal of balancing the emotional equilibrium of the squad.

If he could come out of retirement and suffer the brutal fitness regimes needed to make it to Japan, while knowing that he was only going to be a bit part player, then so could others.

This is a harmonious and positive Springbok squad because Erasmus has only ever played an open hand with the group.

Everyone was told up front what their job was and how they would fit into the bigger picture. Everyone had a purpose and a role. These eight players and the injured Nyakane and Kriel, have all quietly contributed to the Boks’ run to the final. DM