Protesters chant slogans in Siyathemba township outside Balfour July 22, 2009. Protesters hurled stones at police, who responded with teargas and rubber bullets, after thousands marched through the streets on Wednesday over poor services and unemployment. REUTERS/Siphiwe Sibeko

The economy keeps reaching new milestones under President Cyril Ramaphosa’s administration, but sadly not the kind to showcase to voters. Stats SA said on Tuesday 29 October that the unemployment rate inched up to 29.1% in Q3, an 11-year high.

During the third quarter of this year, South Africa’s sputtering economy failed to produce any meaningful job growth, with the unemployment rate climbing to 29.1% from 29% in the previous quarter. That is a record high, surpassing any previous quarter’s peak since the start of Statistics South Africa’s (StatsSA’s) Quarterly Labour Force Survey in 2008. 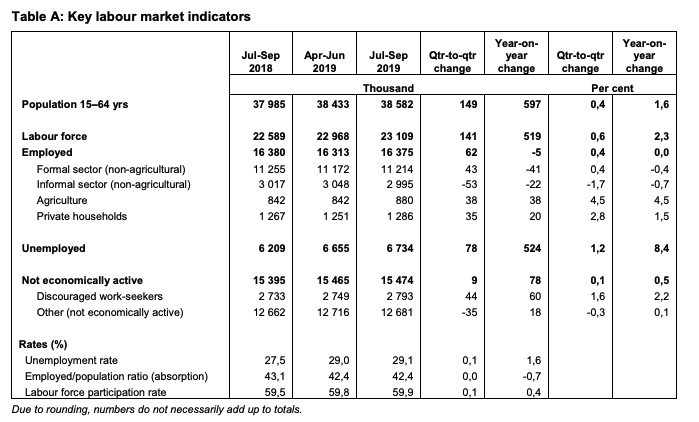 The expanded definition of unemployment, which includes those who have given up on fruitless efforts to find a job, was unchanged at 38.5%. That number is frankly a bit of a thumb suck and is almost certainly higher.

The bottom line is that there are still at least 6.7 million South Africans without a job and probably millions more.

A combination of poor government policies, which are deterring investment, and demographics are at play here. The economy is just not growing quickly enough, or creating enough jobs, to absorb new entrants into the labour market, many of whom are woefully unskilled – a pernicious legacy of apartheid that lives on in a shambolic education system. 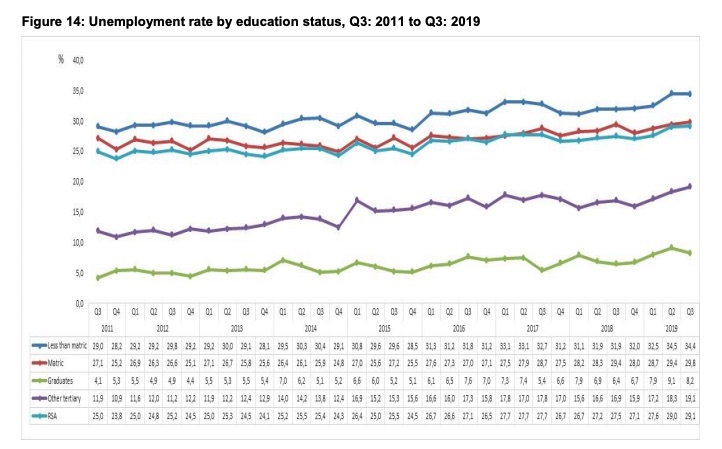 Bright spots in the survey were few and far between. The number of agriculture jobs increased by 38,000, but, amid widespread drought conditions and water shortages, that trend may be hard to sustain, especially if summer crop planting plans fall short because of the weather.

This particular survey, which is of households, must also be read with a big pinch of salt. For example, it shows that the number of people employed in the mining sector also rose by 38,000 or almost 10% from the previous quarter to 419,000.

That was an unexpected increase against the backdrop of generally declining production and almost certainly bears no relation to reality. The Quarterly Employment Survey, which surveys employers, is more realistic in this regard and has shown the general downward trend in mining employment.

Other trends captured in the survey appear to be more realistic.

The construction sector remained in the doldrums, with employment in the sector falling 1.8% on a quarter-on-quarter basis and almost 11% compared to a year ago. That is worrying on a number of fronts. Construction in South Africa remains labour intensive and still employs more than 1.3 million people. It is also a clear sign of new investment, private or public, in the economy. In short, it is a signal of confidence or lack thereof. Yet recently, activity has been centred on a few hubs such as the Sandton bubble, underscoring persistent disparities in Africa’s most industrialised economy.

This fresh batch of employment data comes the day before Finance Minister Tito Mboweni unveils his mini-budget to Parliament, which will hopefully provide more clarity on the direction of government policy. And Moody’s will soon render its latest assessment of where things are headed, which could complete the descent of South Africa’s debt into junk status. For the swelling ranks of the unemployed, such events remain far removed from the harsh realities of survival in this moribund economy. BM