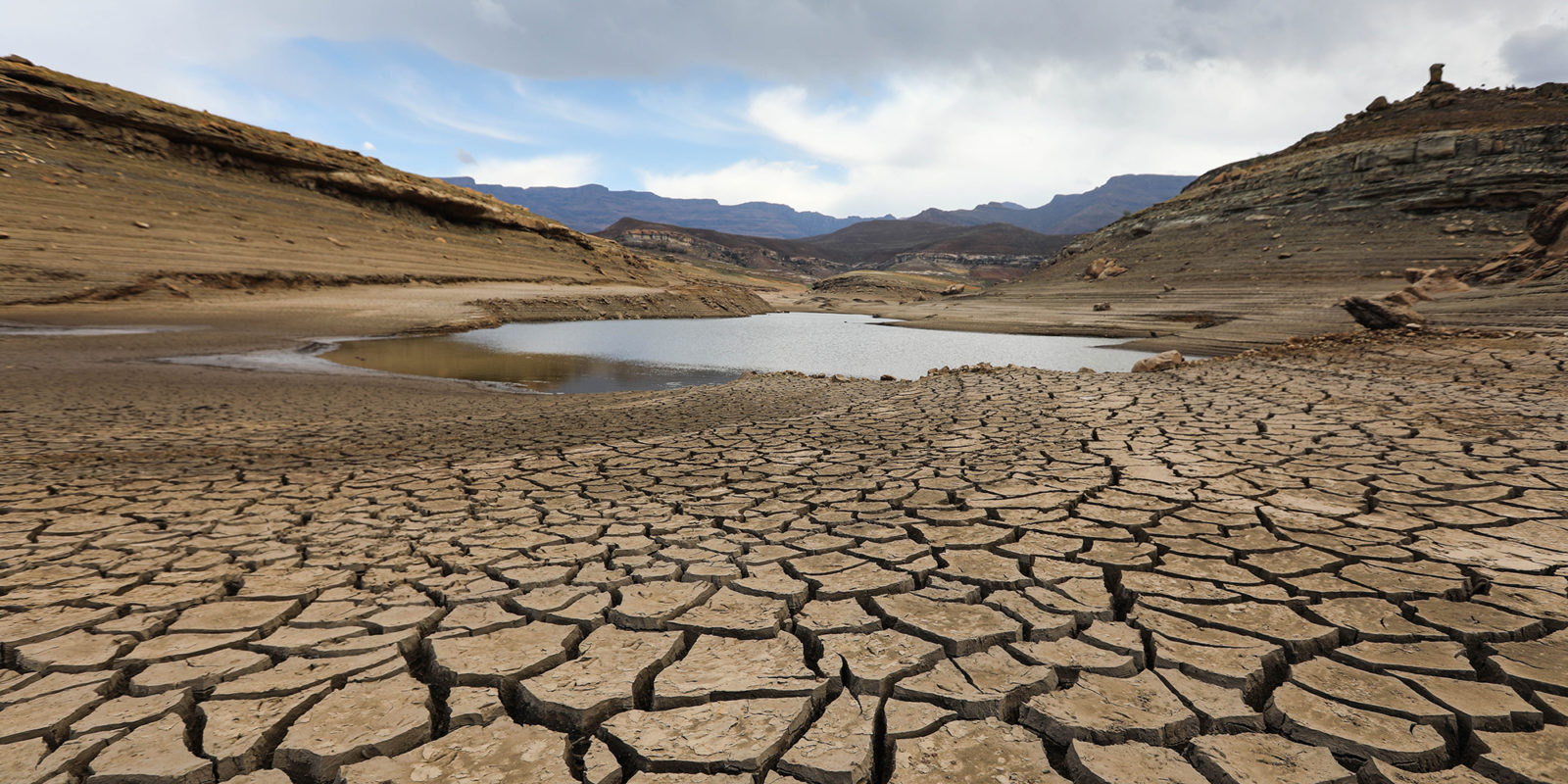 Dry cracked earth is pictured on the dry dam bed, 22 October 2019, at the Fika-Patso dam near Qwaqwa, in the Freestate. The area is experiencing the worst drought in modern history. Picture: Alaister Russell/The Sunday Times

Water and Sanitation Minister Lindiwe Sisulu told journalists on Monday that the water situation in South Africa called for prudence. ‘We are in for a long dry season’.

Water and Sanitation Minister Lindiwe Sisulu said the water situation in the country was very serious, but there was no reason to panic, yet. Addressing media on Monday 27 October, Sisulu said observations of water usage patterns indicated that demand was high.

“We are experiencing what we call a water stress. We face harsh realities right now. We have to immediately begin to disaster-proof South Africa. That is vital.”

“It’s important that I insist there is no need for panic, but there is a need to be prudent in the way that we use water. The situation is very serious. However, it is not one that calls for panic,” Sisulu said.

“We are experiencing very high temperatures and very low rainfall. Indications are that rain will become much harder to predict, we are in for a long dry season,” Sisulu said.

Sisulu said there would be briefings on water issues across the country in an effort to talk directly to the people. She said her department was working with experts.

All South Africans should handle the limited water resources in a sustainable way, Sisulu said. The minister acknowledged that there was no way of altering the climate system influencing weather variability, but urged everyone to do whatever was necessary to save water and use it sparingly.

Demand for water remained high, particularly in the south-eastern, eastern and central provinces. She said the expectation was that these regions would likely become more water-stressed due to usage trends.

She said her department would announce a master plan on how to best approach the situation. The department was working hard to prevent the Day Zero phenomenon.

“What we called you for is to convey to South Africans that we are experiencing severe water shortages. Please use the water sparingly,” she told the assembled journalists.

The department appealed to South Africans to use buckets to water gardens. People have also been advised to reduce the time they take to shower.

Masai said there would be some relief if consumers could save 500 million litres of water a day.

While the water and sanitation department said it was doing all it could to remedy the water situation in the country, identifying those who violated the present restrictions was still a challenge.

“The reason why we have these restrictions is that we hope that people will be responsible enough to adhere to them,” Sisulu said. Those who did not adhere to restrictions would be reprimanded.

“When we sound a call that people should use water sparingly, they do,” Masai said.

Sisulu was able to give a broad outline of her water plan.

When asked about the possibility of water supply cuts, Sisulu said this would not be necessary if everyone stuck to the regulations.

Addressing sewage leaks into supply rivers, the department of water and sanitation said it had implemented part of the National Water Act, issuing notices directives to all polluters, including industry and municipalities.

The Vaal River has been affected by sewage leaks into the river for some time. Sisulu sought to clarify the situation with army personnel roped in to assist with cleaning up the river. Sisulu denied that funds for sustaining this task had dried up.

“They did not run out of money, that is what is running in the news and it’s completely untrue,” Sisulu said.

The department also cited infrastructural problems as another major issue, but assured South Africans that these will be accommodated in the minister’s master plan in November. DM