Negotiating liberation: How failing to do the maths cost a country its dream 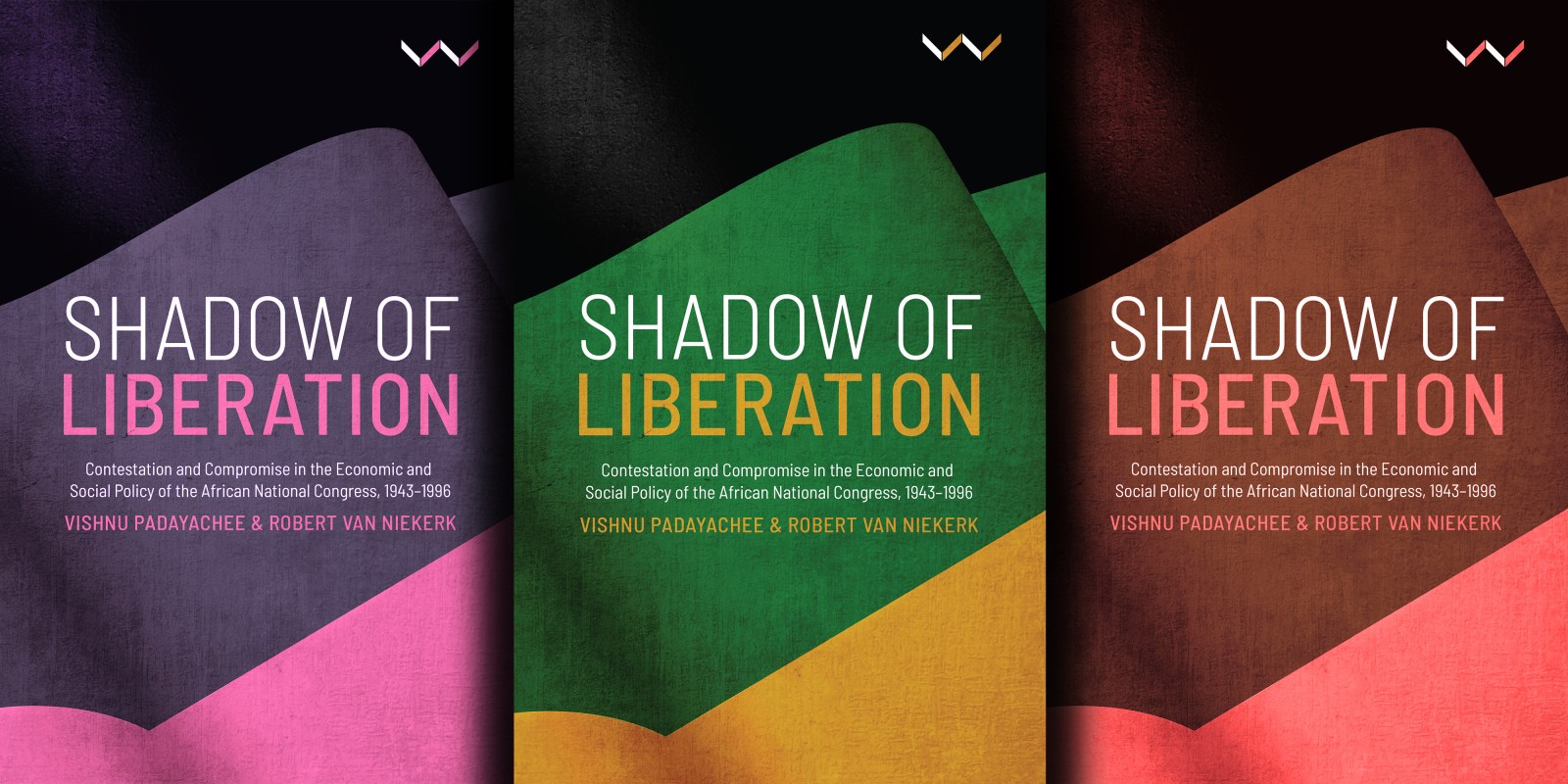 The Medium-Term Budget Policy Statement is only a day away. Business Maverick’s predictions are that it will introduce an even deeper round of austerity. In this context, a book just published by academics Vishnu Padayachee and Robert van Niekerk provides a carefully researched historical analysis that allows us to trace why and when democratic South Africa’s economic policy became delinked from social justice.

In the annals of the history of South Africa’s road to freedom and the years immediately following 1994, Shadow of Liberation, Contest and Compromise in the Economic and Social Policy of the African National Congress, 1943-1996 is a must-read.

Our bookshelves are full and getting fuller with political histories, but when it comes to matters of economy they are relatively bare. This is a strange omission because, as Lenin is reputed to have said, “politics is concentrated economics”. Without studying economic history, understandings of our tortured politics, particularly post-1994, can be fairly superficial and incomplete.

Their book draws on research that covers the evolution of the ANC’s economic policy over a 50-year period. It draws on meticulous — and highly revealing — archival research; records of private correspondence; more than 35 interviews (with all the big guns who have made — and sadly still make — our economic policy what it is); and the existing body of published literature.

The first two-and-a-half chapters set a historical context covering the years 1943 (the African Claims document developed by the ANC in response to the Atlantic Charter) through to the 1980s, when the apartheid economy unravelled in the face of the township revolt and international sanctions. These chapters are scene-setters: helpful, but fairly pedestrian; they tread a road many readers will be reasonably familiar with. However, retracing this period in order to pull out a consistent thread of economic thought — even if the finding is that there wasn’t one — is novel.

However, from the middle of the third chapter the book hots up considerably. It examines developments between 1985 and 1993, the road to GEAR, based on the slaying of MERG and then the RDP. The drama’s most exciting chapter is on the South African Reserve Bank (SARB) and how it got its independence. I’ll return to that.

There’s also a chapter on health policy and economy; revealing in the light of renewed debates on the financing of National Health Insurance (NHI). Interesting here to find Discovery CEO Jonny Broomberg making a cameo appearance as an advocate of a national health insurance system that would lead to “the eradication of the two-tier health system”.

In their final chapter, the authors do the reader a favour by summarising their interpretation and conclusions. Basically, these are that:

Lazy readers could just settle with the summary, but if you did so you would miss the persuasive evidence brought to light; you would deny yourself a remarkable window on a historical drama; you will miss an opportunity to better understand the role and ideas of people who still occupy the economic stage. In fact, it seems odd that 25 years later, the lead actors in government are largely unchanged: Tito Mboweni, Lesetja Kganyago, as well as colleagues such as Trevor Manuel, Maria Ramos and others who, although they have shuffled off to the private sector, clearly still have an influence on economic thinking.

As a social justice activist and constitutionalist, one of the things I looked for in Shadow of Liberation was evidence that the ANC had tied the constitution-making process to a consideration of economic policy that would advance its objectives.

In fact, as former Deputy Chief Justice Dikgang Moseneke has confirmed in his memoir, My Own Liberator, law-making and economic policy-making followed parallel processes, never crossing each other:

“The negotiators did not stare in the eye the historical structural inequality in the economy. There was no pact on how to achieve the equality and social justice the constitution promised.”

In fact, the contrary. At the decisive moment, the ANC included both socio-economic rights and the independence of the SARB in the Constitution, further supporting Moseneke’s contention that:

“ …in practice socio-economic rights did not speak to how to restructure the economy in a way that rendered it more productive and inclusive. The absence of a social pact was a far-reaching omission given the inequality embedded in the social structure of the country at the start of the transition.”

Padayachee and Van Niekerk do not find evidence of internal debates about how an independent Reserve Bank with its objectives constitutionally welded to “protect the value of the currency in the interest of balanced and sustainable economic growth in the Republic” might aid or inhibit socio-economic rights. In fact, they quote Mac Maharaj as recording that granting the SARB constitutional independence went through without much push-back.

There is, however, a very persuasive story of how much effort and importance the National Party, Derek Keys and conservative economists attached to insulating the SARB from democratic management. The authors record De Klerk’s satisfaction that “the NP’s greatest achievement in the Government of National Unity was to promote the adoption of a balanced economic policy.”

The authors do not suggest that SARB independence was the be-all and end-all of the Faustian pact. The issue still elicits strong emotions that often seem to preclude reasoned and evidence-based debate.

There is also a mistaken focus on independence, when the real issue might actually be the inflexible mandate to “protect the value of the currency”, rather than say, promote employment, either instead or in tandem. It should be recalled that it is business, and finance in particular, which drove the global agenda to make inflation the almost-exclusive priority of central banks; for inflation can cause asset prices to lose value in real terms.

Nonetheless, this issue has probably had as great a bearing on debates about the perpetuation of inequality post-1994 as its more infamous cousin, the property clause.

And while on matters SARB — one final, little historical quirk is excavated by the authors who record Trevor Manuel as recalling that when Tito Mboweni was made governor of the SARB in 1999 “he was not as keen as former Governor Stals on meeting regularly with the Ministry of Finance”.

So, Shadow of Liberation is important not just as history, but for an evidentiary base for some of the debates we are having at present.

Its record of how business leaders like Douw Steyn and Harry Oppenheimer made themselves close to Mandela and other ANC leaders with offers of homes and security, seems to be grist for the mill of those who point out that State Capture did not originate with the Gupta family.

Some would say the economic impasse the authors feel resulted from the ANC’s compromises on the economy do much to explain our dire inequality, tender corruption and ballooning of the state bureaucracy that Moeletsi Mbeki argues has grown out of the stagnation of the real economy.

Paradoxically, it could be argued that by doing so much to protect private business and eschewing Keynesian economics, the ANC ended up failing to nudge business into innovation and new growth paths that could have created employment and delivered socio-economic rights.

In my view, Shadow of Liberation is an example of academia enriching the public debate with evidence. This is why it should not be used as ammunition to further polarise, but to re-open debates, get away from prevailing orthodoxies that failed to deliver then — and will fail to deliver now.

In Capital in the Twenty-First Century Thomas Piketty writes that:

“The resurgence of inequality after 1980 is largely due to the political shifts of the past several decades, especially in regard to taxation and finance. The history of inequality is shaped by the way economic, social, and political actors view what is just and what is not, as well as by the relative power of those actors and the collective choices that result. It is the joint product of all relevant actors combined.”

Thus, if we are really committed to the constitutional vision of social justice — and recognise that without equitable and sustainable forms of economic growth we will never get there, the findings of Shadow of Liberation should assist introspection by government, business and activists alike.

Finally, it’s worth keeping in mind that much as the ANC gave away its power to reshape economic policy, the Constitution gave the government legal power over economic direction by mandating a country based on social justice and making the Constitution applicable to all law and “conduct”.

On the eve of another MTBPS, it’s just this authority it needs to invoke to justify continuing its fight against wasteful expenditure and corruption while pursuing pro-poor fiscal and economic policies that will serve the people rather than further emasculate them. MC