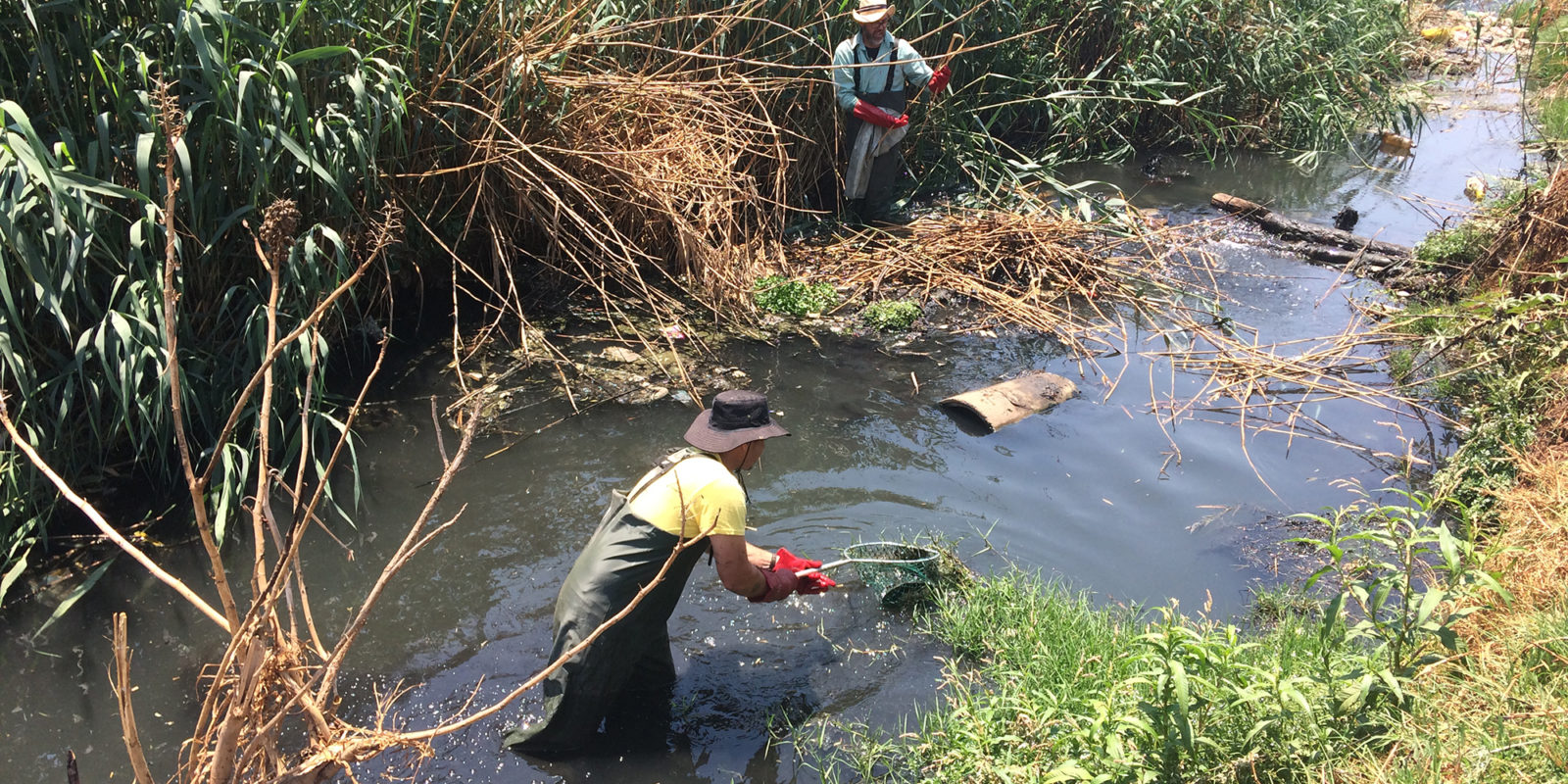 Activists propose a River of Origins corridor. But in the meantime, river cleanup campaigns show how to build communities without borders and create livelihoods from waste collection.

The gigantic quantities of plastic pollution coming down the Hennops River from its wetland fountain sources in Tembisa pollute its 100km length, and beyond, with thousands of tons of plastic. One of our most polluted rivers, there are already three huge plastic and styrofoam islands lower down in the river, one over 100 meters long and so tightly packed that one can walk over it. This waste decays into microplastics, while the styrofoam constantly releases endocrine disrupters.

So polluted are the river’s banks that in the course of Fresh.ngo’s numerous river-side cleanups, an average of 150 rubbish bags full of plastics has been collected over just 50 metres. It is also extremely hard work to extract the plastics from branches and in the soil where it is deposited after every flood.

Activists involved in river cleanups find it very demoralising when the cleaned areas get filled with plastic again after the next flood. After a decade the authorities haven’t made a dent in this problem, and it is getting exponentially worse.

Today there are gigantic heaps of rubbish lying in the source streams, waiting to come down with the first rains. To try to mitigate the problem Fresh.ngo and other citizens group have been reclaiming the rivers.

In October 2019, with a group of amazing river warriors and volunteers from the local community, we set up two beautiful litter traps. Litter traps are like functional artworks that enhance and clean the areas around them. They can also assist to provide a livelihood for the local people, who have been helping to put them up. The new nets will be game-changing and offer a chance to fight back against the overwhelming pollution.

A disused bridge on the Kaalspruit river, just below Tembisa, was chosen for the first net. It is strategically located on the main stream where perhaps 60% of the pollution passes through. This bridge was built on a natural flood plain and was very badly planned. It has been channelling the water through a narrow passage instead of spreading it wide over the whole flood plain. This has caused massive erosion behind it, two storeys deep in places, and is the main cause of the massive siltation downstream, clearly seen in the old Centurion lake.

Placing a litter trap here will help slow down the water and mitigate erosion while catching most of the plastics. It took volunteers three gruelling days in the sun to put the large net up. It is around 30 metres long and 20m high, made up of five smaller pieces of strong netting kindly donated by a local foundation, along with four pairs of waders.

Volunteers sewed the pieces of net together with thick bundles of wire, discarded by cable thieves after stripping electric cables. Like a giant puzzle braided together, the thick wire will hopefully give it the strength to withstand the huge power of the water when flooding.

It was a great experience working together and making friends with such a selfless group of volunteers who came to help, at times about a dozen of us, working along with local volunteers who will hopefully be running the project from here on and make a sustainable livelihood by recycling all the trash coming down.

Volunteers also made a leisure space under the bridge and started to draw murals and make shrines. It is a great place to relax next to the stream and we connected with the community, building bridges between our people.

The water in Tembisa, however, is highly polluted and pitch black from all the sewerage spilt into the stream that comes from leaking sewerage mains in the Johannesburg and Ekurhuleni municipalities. Recently it deteriorated rapidly and the stench became unbearable.

This ancient river is being killed. It is now in the worst state it’s ever been; the blackness and huge amount of sludge now poison the river. Putrefactive bacteria have taken over and they must be combated by re-introducing the good indigenous micro-organisms.

The shameful killing of this life force and using it as waste disposal is harming the people upstream now living dangerously right inside the wetlands; they say they cannot wait for the rains to clean their place again.

The health of millions of people and animals downriver is being endangered. Crops are watered with this water and for many, it is the only source of drinking water. These toxins wind their way down the Crocodile and Limpopo Rivers to the sea.

The area we were working in is a beautiful large wetland nature area that belongs to Ekurhuleni municipality, as custodians of the citizens. We found a very large early Stone Age site next to the bridge with a wealth of Stone Age tools, large shaped rocks and levelled areas. Wits and Cradle archaeologists were contacted to do a survey of the site.

It is being destroyed rapidly by illegal sand-mining, while imminent development threatens the important upper wetland of the Hennops.

The massive new Tembisa mall is being built in the flood plain, and an application board suddenly went up to rezone this public open space for Rez 4 housing. This should definitely not be allowed in this sensitive wetland nature area and flood plain.

A heritage park forming the top part of the Hennops River of Origin nature corridor would be a much more sensible use and create a nature reserve area of incalculable value.

A few hundred metres away, the smaller Clayville tributary also flows into this wetland to join the Kaalspruit. Although coming through an industrial area, the water quality here is much cleaner, even though it is filled with trash. Our four volunteers first removed a pile of old insulation boards and a bloated dead dog in a pool where the local kids still swim.

We found a slow-flowing natural litter trap area and pulled out about 20 rubbish bags full of entwined trash from the pool and cleaned floating trash for about 100 metres further up. Once the rotting layer of rubbish was removed and the flow established, the water quality started to improve and the stream came alive again. Some more old nets were donated.

These two traps should hold back the avalanche of rubbish from Tembisa if they can be serviced and cleaned often. But if they become clogged with rubbish the water force might become too big and pull them along.

These are the idyllic places of our ancestors, completely forgotten and polluted by us, their callous descendants.

We spent a golden day here, with the local kids helping to pick up rubbish and some local volunteers helping us; we worked till early evening to get everything done and then sat around a fire. A place one would expect to be dangerous felt so peaceful, a natural and dark area amid a sea of lights. It felt like a privilege to be working so close to the water and in nature.

This kind of work is best done for free, giving back to our natural world, which freely gives us so much abundance. We see it as a movement of the people to restore the natural world that has been stolen from us by industry. Rivers have been turned into polluted no man’s lands where no one dares to venture any more, our ancestral world alienated from us by the massive pollution – we must stand firm and fight for our heritage and our humanity.

The envisaged Rivers of Origin corridor can be the beginning of a new connection with the beautiful and bountiful world of nature, the clear fountain waters that gave life to the first of our kind over the millions of years of our early evolution in our Cradle. A natural corridor through our urban world would act as an antidote to the sickness and shallowness of our modern world – a place to find our roots again and relearn our true values and our interconnectedness within the nature that nurtured our species.

Once clean and protected, these corridors can become attractions of worldwide significance, a place of pilgrimage for our species to experience and honour our shared birthplace.

These timeless fountain-rivers of the Witwatersrand, now so highly polluted and forgotten, can still restore our planet; by cleaning and reviving them we can heal the heart of Humankind. MC

Willem Snyman is with Fresh.ngo, a nonprofit organisation that aims to clean up South Africa’s rivers, dams and waterways.

Strong medicine: Community perspectives on the health services in the Eastern Cape