The Week Ahead: Budget, business and billions in the spotlight at Parliament 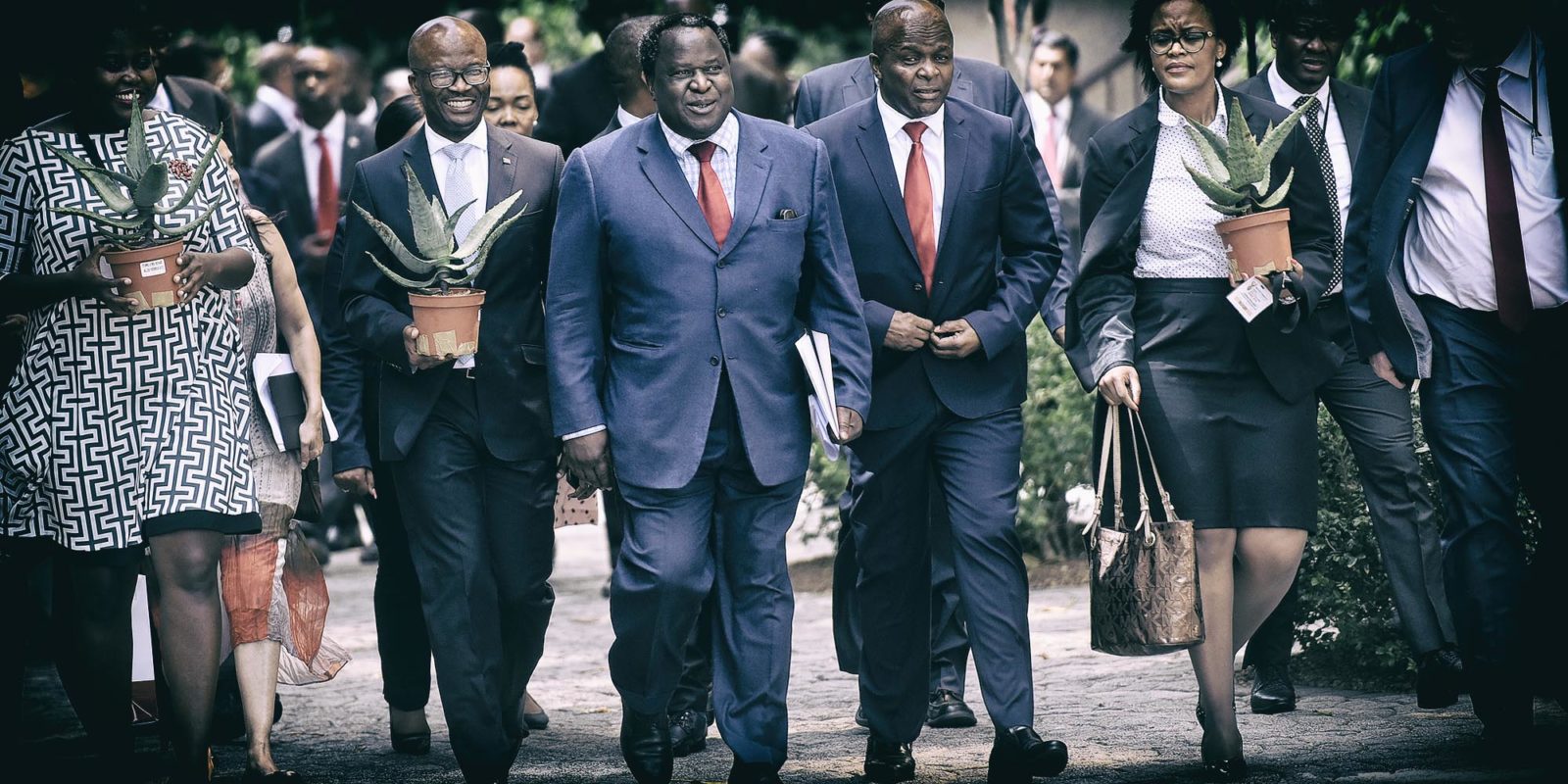 There's a full and mixed flavour to the coming week's parliamentary business. The highlights include the mini-Budget, Question Time Sessions, legislative business and high-profile Committee hearings.

All eyes will be on the Minister of Finance when he delivers the Medium Term Budget Policy Statement (MTBPS) on Wednesday. The MTBPS outlines the economic context against which the 2020 budget is being formulated and sets out the spending framework for the next three years.

The mini-budget is important as it gives an update on tax collection, government spending and deficits, economic growth targets and signals whether the country is still on track to meet plans laid out in the main February budget. Further, it gives government a chance to reprioritise spending to areas that may urgently need more money.

The Minister has a tough job to do as he seeks to stimulate the economy, contain expenditure and satisfy ratings’ agencies. All of this must be achieved against a backdrop of low growth, revenue shortfall, high unemployment, increasing government debt to GDP, failing SOEs, a growing public sector wage bill, extreme inequality and growing pressure from the public.

The Finance Minister is expected to give more details on the additional support to Eskom and restructuring of its debt and steps to strengthen public finance management.

With so much at stake, the markets and South Africans will be watching to see what balancing act the Minister achieves. Under the current economic conditions, government will have to do more with less.

The Minister will introduce the Adjustments Appropriation Bill, the Rates and Monetary Amounts and Amendments of Revenue Laws Bill and the Taxation Laws Amendment Bill.

Beyond this, Question Time session with the President is another point of interest. This is the President’s final interaction with NA lawmakers for the year. President Ramaphosa will be grilled on a variety of issues, including the government’s plans to reduce inequality; the status of the Minister of Finance’s recover plan; the R1.1-billion redirected to the fight against gender-based violence and whether the recommendations of the Presidential Advisory Panel on Land Reform and Agriculture will be implemented.

It’s also raining reports in the main chamber where the House will consider several Budgetary Review and Recommendations Reports.

Elsewhere, the NCOP has scheduled two sittings this week. Both days have been set aside for oral questions with Ministers in the Economic cluster. On Tuesday, the Ministers of Agriculture, Land Reform and Rural Development; Environment, Forestry and Fisheries and Mineral Resources and Energy will be in the spotlight. Read the questions here.

On Thursday, it will be the turn of three different Ministers: Trade and Industry; Employment and Labour and Tourism. The stand out questions are about the high unemployment rate, eviction of farmworkers, rolling out e-visa applications, success of BBBEE, programmes to confront fronting and the decline in tourist numbers.

Public hearings on the National Health Insurance (NHI) Bill will move from to Mpumalanga to the Northern Cape. The bill has generated widespread interest and sparked debates about the state and future of public and private healthcare in South Africa.

There’s lots of action in Committee-land. Legislation, mega-important spending decisions and headline-grabbing hearings dominate the Committee corridor. Here is a run down of the highlights:

The budget theme starts on Tuesday when the Joint Appropriations and Finance Committees receive a pre-MTBPS briefing from the Parliamentary Budget Office. The PBO is supposed to provide independent and non-partisan analysis of the budget cycle, fiscal policy and the financial implications of proposals ahead of the speech. (Tuesday)

The Minister of Mineral Resources and Energy will present the 2019 Integrated Resources Plan (IRP). The IRP refers to the long-term planning of power (electricity) generation from various energy resources. The IRP 2019 supports a diversified energy mix. According to the plan, coal will continue to play a significant role in electricity generation as the country has the resource in abundance. New investments will be directed towards more efficient coal technologies (High Efficiency, Low Emissions), underground coal gasification and the development of Carbon Capture and Storage. (Tuesday)

The Portfolio Committee on Basic Education will be briefed on a variety of topics: the Education Infrastructure Grant (EIG); Accelerated Schools Infrastructure Delivery Initiative (ASIDI) and Sanitation Appropriate for Education (SAFE) Initiative. (Tuesday)

Last week, the Department of Water and Sanitation briefed MPs on the efforts being made to recover funds owed to entities responsible for ensuring a supply of water to South Africa’s urban and rural communities. Parliament was told that outstanding municipal debt for water is putting some water boards at risk of going under and affecting the ability of the Department of Water and Sanitation to maintain infrastructure. Water-use debt to the Water Trading Entity (WTE) and water boards had escalated by 14%, from R13.1 billion in September 2018, to R14.9 billion in September 2019. The challenges faced by the Department included a culture of non-payment within municipalities; current laws do not make provision for channelling the equitable share for the purpose of debt reduction; current laws do not make provision for top slicing grants for the purpose of debt reduction; resistance to legal steps against delinquent municipalities; possible going concern qualifications for water boards and the WTE; and huge impairments of debt, which reduces the reserves of water boards and the WTE. Proposed solutions to these challenges put forward by the Department were continuous stakeholder engagements, the top-slicing of municipal grants, continuous participation in the inter-ministerial task team (IMTT), and continuous participation in the provincial joint tactical committee. In an effort to tackle this problem, legislators will get an update from the relevant stakeholders – SALGA, Treasury and COGTA – on what is being done to assist assisting municipalities to pay the debt owed. (Tuesday)

Last week, Parliament heard from the SALGA, the Mayors of Johannesburg and Ekurhuleni and the Department of Home Affairs on the impact of illegal migration on the country’s cities. This week, the legislature will hear from NGOs on issues that affect migrants and citizens. (Tuesday)

In the Fifth Parliament, SCOPA expressed concern about the losses suffered by the state as a result of procurement through deviations and expansion of contracts by some government departments and entities, without the approval of National Treasury. This topic was firmly on the committee’s radar and has continued in the sixth Parliament. The committee will get a briefing from National Treasury on deviation and expansion for national departments and entities for quarter four of 2018/19 and first quarter of 2019/2020. (Tuesday)

The Department of Higher Education and Training will provide MPs with a situational analysis and profile of governance and management in each university. (Tuesday)

The Portfolio Committee on Justice and Correctional Services will get an update from the Parliamentary Legal Services on the removal of Adv. Jiba and Mrwebi from office. (Tuesday)

Earlier this year, the Eskom Chairperson described the problems facing the power utility as “financial, structural and operational”. Recently, Eskom experienced severe generation capacity challenges and had to embark on load shedding. In addition, Parliament is in the process of approving a R59-billion bailout for the company. Given all of this, the meeting with the Eskom Executive Board on the challenges facing the power utility is timely. (Tuesday)

The Portfolio Committee on Police will get a briefing by SAPS Provincial Commissioners on their consolidated Action Plans. (Wednesday)

The Portfolio Committee on Justice and Correctional Services will deliberate on the Promotion of Access to Information Amendment Bill. (Wednesday)

The Joint Standing Committee on the Financial Management of Parliament will hear from the Department of Public Works on all infrastructure-related matters in respect of the parliamentary precinct and parliamentary villages. (Wednesday)

Interviews are conducted for filling vacancy of Commissioner for the Public Service Commission. (Thursday and Friday)