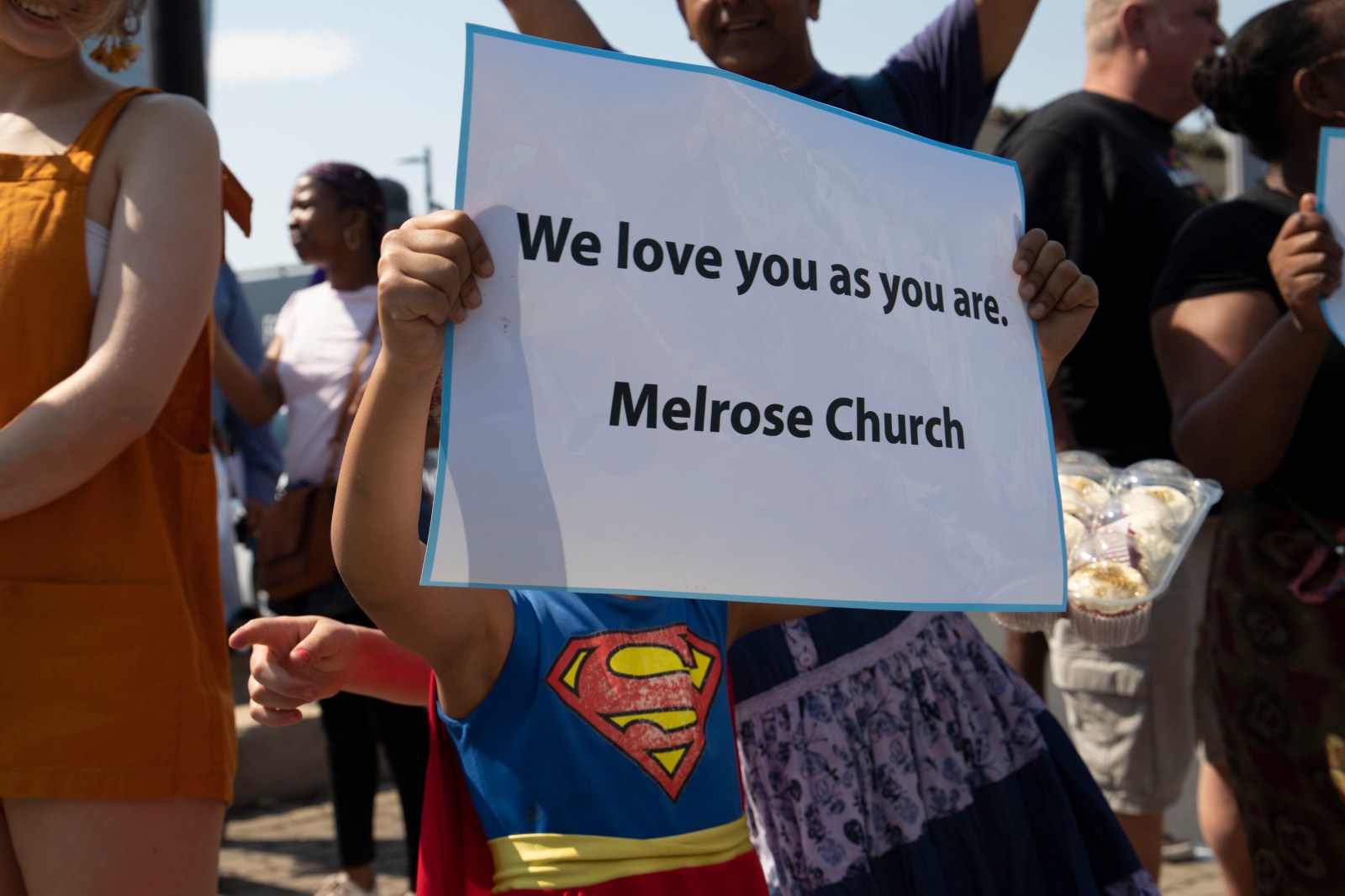 Melrose Church attended Pride 2019 to offer love, support and apologies for the way Churches have treated the LGBTIQ+ community. Photo by Chanel Retief

The queer community at Joburg Pride on Saturday in Sandton were joined by an oddly unexpected group of individuals who have historically condemned their existence – Christians. This time though the intention was not to wield any hostility but to offer hugs and kisses of affirmation.

Author, speaker, futurist, and former minister in the Baptists Union of South Africa Graeme Codrington put out a call from his church to Christians to stand along the Johannesburg Pride route to offer love, support, and apologies for the way churches have treated the LGBTQI+ community. His call saw at least 20 people join him on Saturday.

Speaking to Daily Maverick at the event, Codrington said his church is one of the few churches that fully affirm people in the LGBT community. For years they have hosted various events, including discussion groups and studies, to help people who are struggling to reconcile their Christian beliefs with the growing understanding that LGBTQI+ people are born the way they are, and just as much “children of God” as cisgender and straight people.

“Our goal was to bring ‘Good News’ to the LGBTQI+ community. For centuries the church’s message to queer people has been that they are somehow broken, and that God does not approve of who they are. They are told they have to be straight in order to find love and marry. We don’t believe that, and we want to bring that message to Pride. At the same time, we wanted to apologise for how the church has treated LGBTQI+ people in the past,” he said.

Many queer people experience brazen humiliation and discrimination in the churches that they attend and one instance that caught people’s attention and opened up a lot of debates was back in 2017 when choreographer and television host Somizi Mhlongo walked out during a sermon at the Grace Bible Church after Ghanian Bishop Dag Heward-Mills called being homosexual “unnatural”.

The Catholic Church has in the past also isolated the homosexual community. Such teachings have evolved through a number of ecumenical councils and the influence of theologians including the Church Fathers. Pope Francis made a very offensive remark in 2018 when he recommended that parents seek psychiatric help for children who “show homosexual tendencies”. But he later pulled back on that statement when he said that “homosexual tendencies are not a sin”.

Christian activist and member of the Melrose Church, Nigel Branken has deep convictions that the Bible scriptures are not against homosexuality and that God loves people regardless of their sexual orientation.

“Even the word ‘homosexuality’ has only been translated in the New Testament in the last 50 years. The reference of homosexuality at the time of Jesus, Jesus doesn’t mention homosexuality once in all that he does. I think the churches got so caught up in the things that don’t matter. We get caught up on what people do with their bodies when it’s how we treat one another that actually counts. This is about human dignity, human flourishing, Jesus wants us to care deeply for humanity and how better to affirm him than to come and stand with people in a Pride march and say we value you and we stand with you and your dignity,” Branken said.

“We are doing this because we love everyone, and we are a church of radical inclusion. I’m gay and I’m part of this church and found complete and utter acceptance. This is a statement that we’re making, that we are loved by God and that we don’t follow the normal church rhetoric and that we are exceptional in the way we do things,” said Dominic Mphasa.

Sam Ralarala said it was quite interesting to see Christian people among them especially since there is a norm that gays don’t belong in church but in hell instead.

“Them being here today actually means that we mean something, God is with us and He sees us. Many gay people attend church every Sunday and a lot of the time we feel we are not entirely welcome and you’ll find most of us acting so straight because we don’t want to be perceived as ‘women’, so its really lovely to see that there are people in the Christian community who are so open-minded,” he said.

“When we started seeing the posters and people on the sides, we anticipated trouble, but when we started reading the slogans it was so heart-warming. I actually got goosebumps that okay, we are making progress,” said Maaike Hersov.

“Some of the best people I know are queer. I know it’s a generalisation, but they’re just great people – caring, inclusive, loving, gentle and deep. Some of the best marriages I know are gay marriages, and I look to these relationships to learn how to love my own wife better,” said Codrington. He encouraged his fellow Christian fellows to do more reading and research, starting with his blog. DM