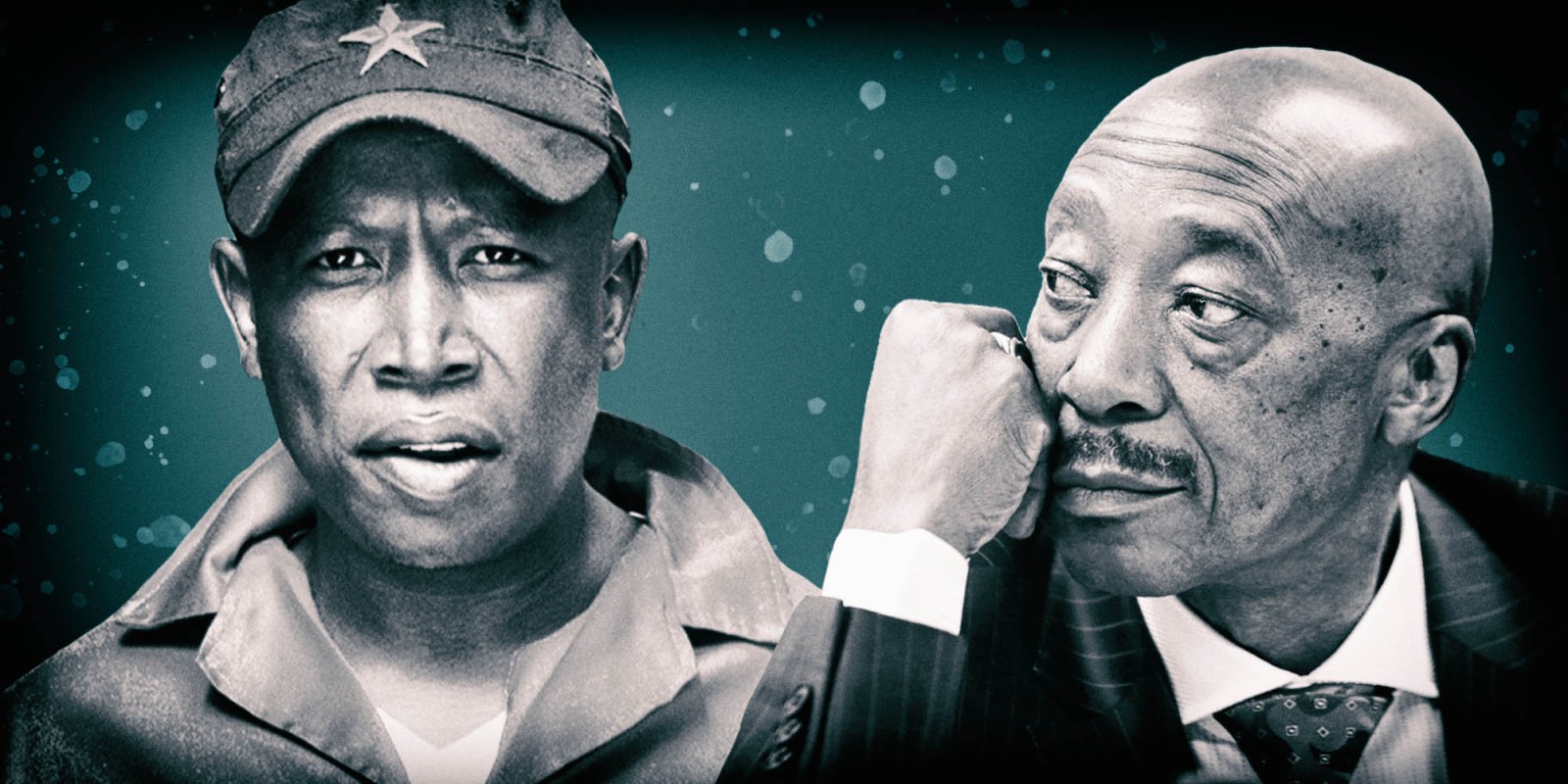 AfriForum will privately prosecute former SARS commissioner Tom Moyane on charges of assault against the mother of his grandchild and has announced plans to ensure the proper prosecution of EFF leader Julius Malema by the National Prosecuting Authority.

“We need to protect the integrity of the legal system and we intend to make sure the message goes through that no one is above the law. It does not matter what your surname is; if you transgress the law then you should be prosecuted.”

These were the words of AfriForum CEO, Kallie Kriel at a media briefing in Centurion on Thursday 24 October 2019. AfriForum’s Private Prosecution Unit has confirmed it has served a mandamus application on the National Prosecuting Authority (NPA), forcing it to make a decision on whether it will prosecute EFF leader Julius Malema on criminal charges relating to alleged corruption, money laundering and racketeering that stem from 2011.

Reminding the room that these charges make up only one out of three separate criminal matters pending against Malema, advocate Gerrie Nel, head of the unit, announced that following ongoing pressure from AfriForum, the NPA has agreed to prosecute the EFF leader on the remaining two criminal charges.

Malema is accused of assaulting a police officer in April 2018 as well as negligently discharging a firearm in public in August 2018. He is expected to appear before a court in each matter before the end of 2019.

In a surprise, Nel used the media briefing to announce that the unit had received a nolle prosequi certificate against former commissioner of the South African Revenue Services (SARS), Tom Moyane, which will allow AfriForum to privately prosecute Moyane on criminal charges of assault with intent to do grievous bodily harm and damage to property.

The charges follow allegations made in May 2018 that Moyane had assaulted Lerato Maila at Moyane’s home in Roodepoort, Gauteng. Maila was at the time of the incident in a relationship with Moyane’s son and is the mother of Moyane’s grandchild.

In May 2018, Maila laid charges against Moyane, who at the time was the SARS commissioner. The NPA announced 14 days later that it would not prosecute Moyane due to a lack of evidence.

Nel says AfriForum was prompted to become involved in the matter after it had been approached by members of the public.

“In light of the wave of violence against women and children in the country, this is a very important case in which AfriForum’s Private Prosecution Unit simply must get involved,” said Nel.

Following the NPA’s decision, AfriForum will privately prosecute Moyane on behalf of Maila on all charges.

The announcements on Malema follow an ongoing battle between AfriForum and the NPA concerning the NPA’s failure to provide AfriForum with decisions on whether it would prosecute the EFF leader.

By mid-2019, no further progress had been made.

In a media briefing in July 2019, AfriForum said it would approach the court with a mandamus application to compel the NPA to decide whether it would prosecute Malema in respect of the charges of assault and the negligent use of a firearm.

In April 2018, Malema and EFF spokesperson Mbuyiseni Ndlozi were involved in the alleged assault of a police officer after he apparently refused the EFF members entry to an event.

The altercation was caught on CCTV, but Malema has vehemently denied the allegations of assault, saying he has his “own protectors and [had] full accreditation to be there.”

In August 2018 additional accusations were levelled against him for allegedly discharging an automatic assault rifle at the EFF’s fifth-anniversary celebrations at the Sisa Dukashe Stadium in the Eastern Cape.

Again, despite the existence of video footage of the incident, representatives for Malema denied any wrongdoing, claiming that the firearm was fake:

“It is not a firearm and no real bullets were shot. It was a simulation, part of our entire act of celebrating the fifth anniversary. It coincided with the singing of struggle songs and fireworks” (see Daily Maverick’s coverage here).

Following persistent pressure from AfriForum, in September 2019 the NPA said it would prosecute Malema and his co-accused in respect of the assault.

“The NPA has agreed to prosecute Malema on charges of assault and he will be appearing in the Randburg Magistrate’s Court on the 20th of November 2019,” said Kriel.

In October 2019, AfriForum received written confirmation from the NPA that it will also prosecute Malema for discharging the firearm. “[The date] is still to be confirmed but we presume that Mr Malema will be in court on the 27th of November 2019 in Mdantsane. For us this is a big win; we just want the NPA to do its job,” said Kriel.

However, the NPA has failed to make a decision on whether it will prosecute Malema in respect of the charges of alleged corruption, money laundering and racketeering related to the On-Point scandal.

AfriForum has confirmed that the unit has served an application compelling the NPA, through the court, to reach a final decision.

In 2012, Malema was linked to allegations of irregular tender proceedings involving a R52-million contract awarded to On-Point Engineering by the Limpopo Transport Department, from which the EFF leader purportedly profited substantially.

Following an investigation into the allegations of corruption, the then Public Protector Thuli Madonsela released a report titled “On the Point of Tenders”, which showed that Malema’s family trust had a vested interest in On-Point. She found the awarding of the tender to be “unlawful, improper and constituted maladministration,” and that Malema had benefited improperly.

Following various delays, Malema was set to face the court in August 2015, but when his co-accused was sick and could not appear, the court — taking into consideration the number of postponements between 2012 and 2015 — struck the matter off the roll.

“It’s important to note that the state opposed the fact that the matter was struck off the roll. It intended to proceed with the matter on this day,” said Nel at Thursday’s briefing.

While Malema revelled in what he felt was a victory, the NPA warned the EFF leader that the matter could be enrolled at a later stage:

“This is not an acquittal, it is not a verdict as the judge stipulated. The matter was just struck off the roll… possibilities are that the Directorate of Public Prosecutions (DPP) with jurisdiction can be approached to issue a certificate to reinstate the matter,” said NPA spokesperson Luvuyo Mfaku at the time.

In March 2018, AfriForum approached the NPA and demanded that the case be reinstated. The NPA responded in writing, agreeing to consider the reinstatement and that a decision would be made and communicated to them by August 2018.

This target date was moved to November 2018, but no decision was forthcoming. In February 2019, the NPA indicated that a final decision would be taken in the first term of 2019. The NPA has failed to meet this deadline.

Resorting to a mandamus application is what Nel describes as “reasonable”.

“It’s disconcerting that we must resort to approaching the courts to compel the NPA to do nothing other than their job,” said Nel.

The court has set July 2020 as the date to oppose the application, but using a court process has cost and delaying implications.

“This decision is already long overdue and it creates questions about the NPA’s willingness to act against Malema decisively,” said Nel.

Only if the NPA decides not to prosecute can AfriForum apply for a nolle prosequi certificate to privately prosecute Malema, as is the situation with Moyane.

Moyane is accused of allegedly assaulting Lerato Maila in May 2018 in his home in Roodepoort. According to Maila, Moyane scratched her on her abdomen, pushed her around and kicked her in the face. She alleges he smashed her phone against the floor when he realised that she was video-recording the assault.

Maila laid charges of assault with intent to do grievous bodily harm against Moyane as well as charges of damage to property. The NPA has decided not to prosecute Moyane due to lack of evidence.

At the time of the incident, Moyane was the SARS commissioner.

“What is interesting to note, having briefed you on the delays in the Malema matters, is that this incident happened in May 2018 and the NPA, without a consultation with the victim, declined to prosecute only 14 days later,” Nel said.

“Such alleged actions are indicative of bullying and Moyane should be held accountable. The NPA’s failure to prosecute him is also a gross violation of their constitutional duty to strive for justice in society.” DM