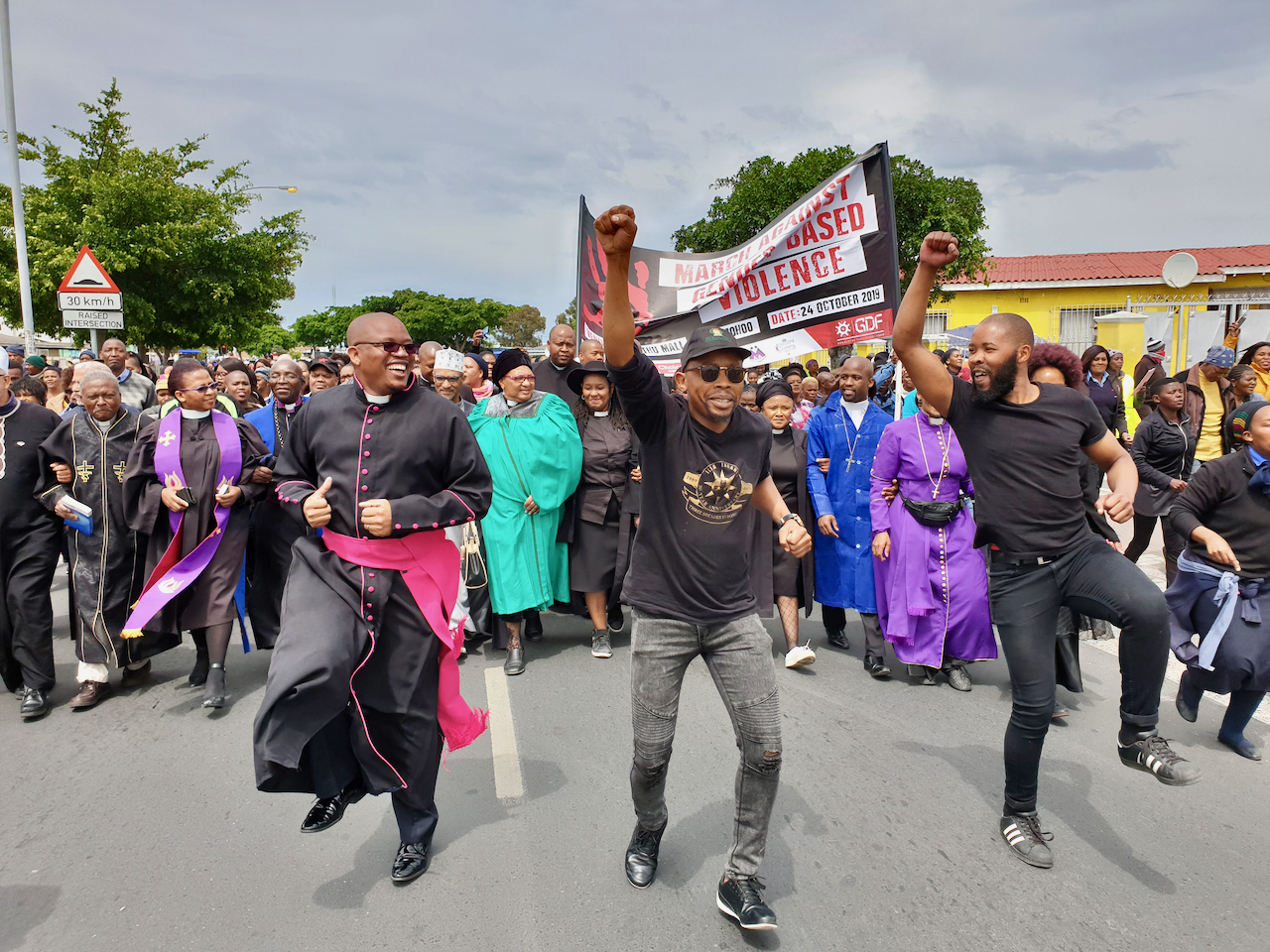 From left: Reverend Zamuxolo Mfihlo, Ludwe Nkomo (of Ilithalabantu) and Lwanda Mpondo, danced and sang as they joined thousands who marched in Gugulethu against gender-based violence on Thursday. Photo: Mary-Anne Gontsana

‘Until we fix ourselves as men, nothing will come right.’

Thousands of residents marched against gender-based violence and Afrophobia in Gugulethu on Thursday. Traders packed up and shops closed in Gugulethu Mall in support of the #GugulethuShutdown march organised by the Gugulethu Development Forum (GDF).

Movement for Change and Social Justice, Realistic, Ilithalabantu, and Cape Flats Inter-faith Declaration Initiative were among the civil society organisations that joined the demonstration. A poster held up by members of Sonke Gender Justice commemorated the death of Phumeza Nkolonzi, a young lesbian woman who was shot in Nyanga in 2012.

Lwanda Mpondo, who works as a care support assistant at Intshukumo Secondary School, and who was part of the organising team, said, “The reason we are here today is to fight against violence and Afrophobia.” He said the community was “trying to come up with a strategic plan and unite everyone in Gugulethu to fight against gender-based violence and other social ills”.

Noncendo Nomqa, who joined the march, said her daughter was raped and killed and her son was beaten to death, both in 2013 in Gugulethu.

“Till this day, six years … I do not even know who the investigating officer was or whether the deaths of my children were ever investigated. I decided to join the march today because I still feel that pain of six years ago. I want the police to do a better job,” she said.

Tambo Village resident Xolisa Hlwempu said, “This is simple: when a woman says no, it means no. There are men among us who go out drinking in shebeens then come back home and victimise the women children. These things happen at home. That is why we are urging women to make reporting such things to the police a norm.

“And we are also asking our police and justice system to work harder. We can’t have perpetrators being arrested then released the following day and let back into the community.”

Noel Timms, general manager of a supermarket in the mall, said he supported the march wholeheartedly. “It is time now as men to take a stand and say enough is enough. It starts with us, and until we fix ourselves as men, then nothing will come right.”

The demonstrators sang, “Our only crime is being born women” and “Hands off my vagina” as they marched up Steve Biko Drive to the Gugulethu Police Station, with pastors and bishops holding hands.

The marchers delivered a memorandum to Lieutenant Colonel Bertie Brink, addressed to the South African Police Services (SAPS), the departments of Justice, Social Development, Community Safety and the City of Cape Town.

GDF deputy chairperson Mzwandile Panziso said they want a response from government within 14 business days. “If we do not get a response, then we will not be responsible for what happens next. We will definitely shut Gugulethu down.” DM